Valdanos; the post communist abandoned resort that we loved

It’s no secret that I despise hoards of tourists so when we hit Ulcinj and I realised it was a heaving mass of (admittedly Montenegrin and Serbian) tourists, I got out the map and started looking for something a little more off the beaten track. I came across Valdanos and had a dig around for some info.

How does driving through 18,000 olive trees (some up to 2,000 years old), en route to an abandoned cove sound? It sounded good to me so I dragged the family off to find it and see if we could beat the tourist traps. 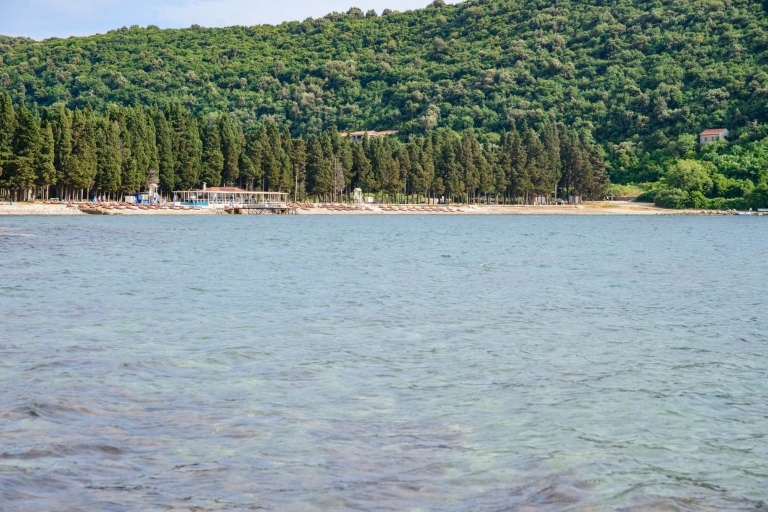 We were in Montenegro for approximately six weeks and we had amazing weather but sadly I chose the one day where the weather was miserable to explore this area, although it didn’t deter us.

Some locals say that a few olive trees originate from Ancient Greece and are 2,000 years old although the majority are thought to be around 300 years old. It’s still pretty old! 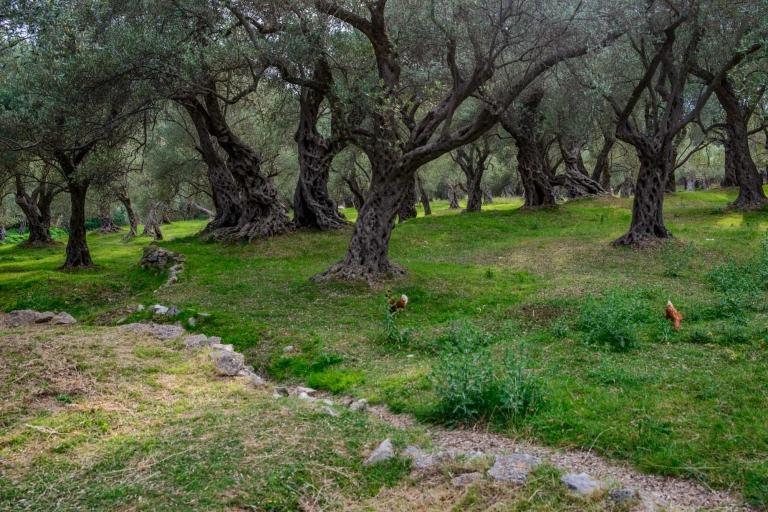 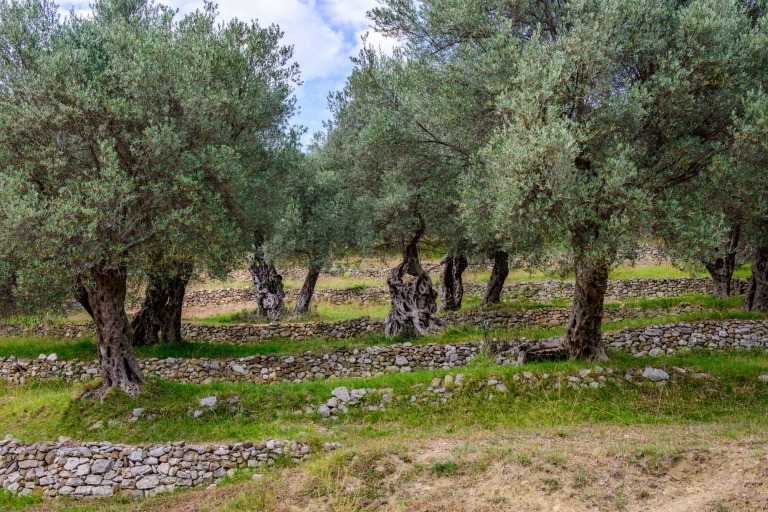 The olives in this areas represent goods equal to gold. Ulcinj (which is pronounced Ulsin-ya) Olive oil was renowned and shipped in amphorae and jugs using trading canals to many cities on the Adriatic coast.

Olive oil from the groves can be bought at many of the road-side stalls today. It is light in texture but mildly fruity in taste. You can also buy olive oil soap and other locally crafted items.

The area is unusual in that there are remnants of buildings having been left for nature to take over but there are horses, chickens and cows grazing randomly throughout. 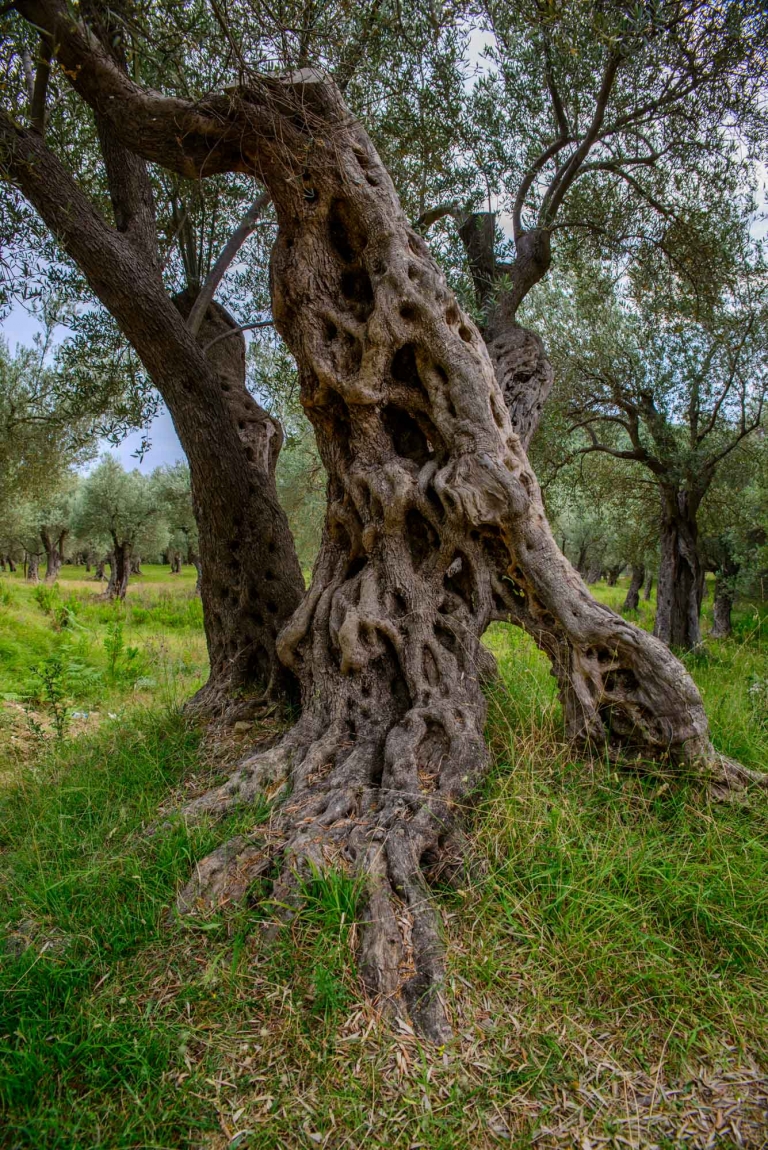 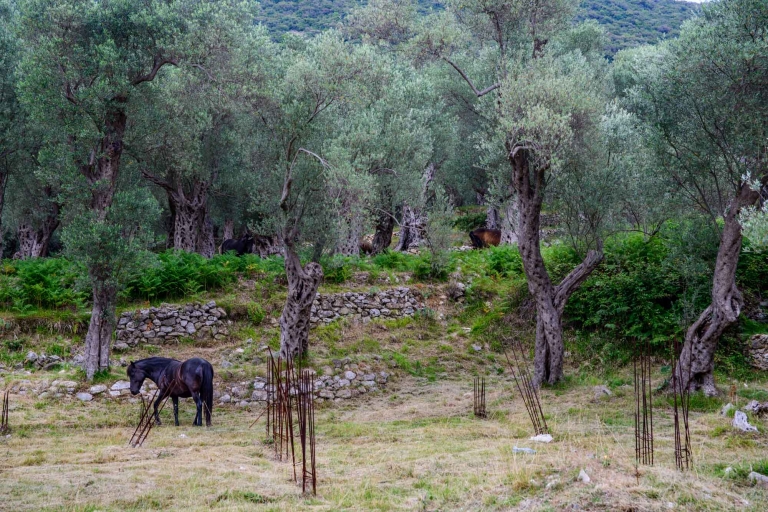 Abandoned buildings have been taken over by nature.

Valdanos has a passionate, abusive and intricate history and although it now looks abandoned and overgrown it was once a thriving holiday resort.

Valdanos history actually dates back to Medieval times and although armed conflict in the bay mostly left Roman & Greek shipwrecks on the sea bed, it is rumoured that there is also a submarine wreck in the area.

In more recent times, the inhabitants of Valdanos were forced from their land twice during the last century. Firstly in 1949 when the government wanted to establish an agricultural program and the second in 1978 when the Federal Secretariat for National Defense of Yugoslavia claimed the land for military purposes.

In 1978, when the people heard of the army’s plans to destroy the olive groves for a military base, public outcry was overwhelming and the FS eventually settled for a smaller portion of land however the removal of people began in 1978 when residents were dispossessed of their property and land.  Of the 200 families displaced, 184 accepted the initial terms. The sixteen who declined, went on to sue the state and were later awarded three times the original amount they were offered ($1 per square meter and $60 per olive tree). 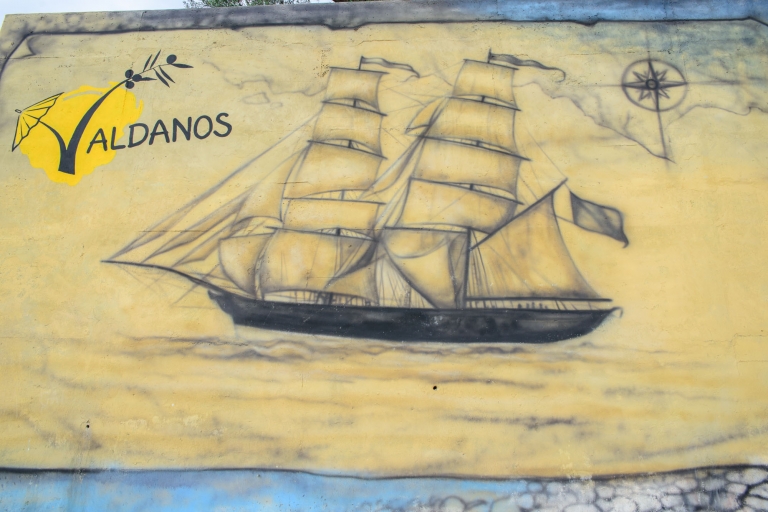 In 1980 the military decided to use Valdanos as a resort for its forces instead. Plans were drawn for a resort featuring two exclusive private villas, 29 duplex homes, campgrounds, trailers and pre-fab houses which were staggered on the hills with breathtaking views of Valdanos Bay. It also had a supermarket, a pastry shop and a restaurant offering a 270-degree view across the bay. The restaurant had a spiral staircase which led down to the water. It opened in 1983.

If you walk around Valdanos many of these relics can still be seen today although they’ve obviously seen better days. The pool is now full of stagnant green water and many buildings are on the verge of collapse. 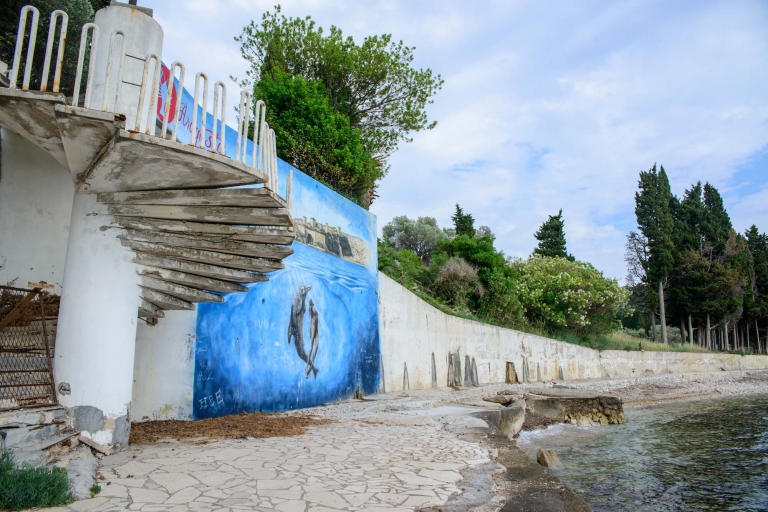 The once restaurant which is now crumbling down

By the early 1990s the turmoil in Yugoslavia had boiled over but the Yugoslav Navy had nowhere to park its fleet.

In 1993 the Navy assumed control of Valdanos with plans to convert the resort back into the original plan for a military base however response was negative and the Supreme Court failed to authorise the project. 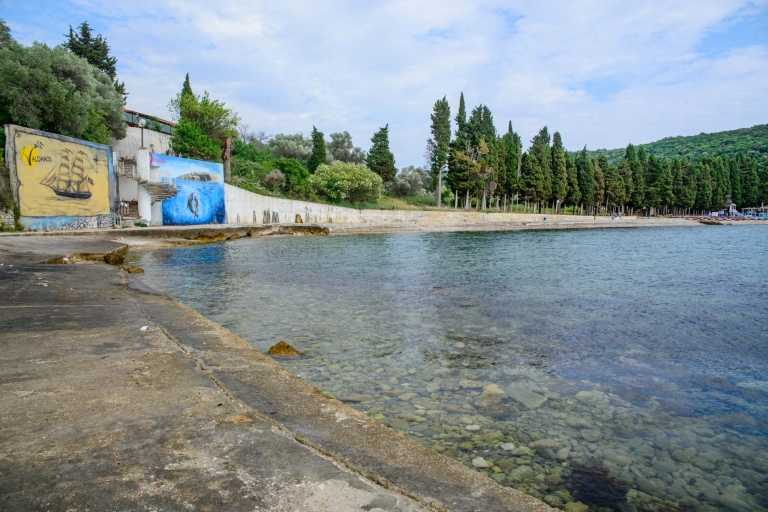 The viability of Valdanos had been driven by its easy access so when Yukoslavia dissolved, the Croatian and Slovenian visitors dwindled and by 2007 the resort was on the brink of bankruptcy.

This is apparently what it looked like in the 80s.

In 2008, Montengro called upon international-only investors to submit bids for a 30 year lease of the former resort.

Although original interest was high, with billionaires such as Roman Abramovich and the Rothschild family submitting interest, it was Croatian Cubus Lux who won the bid however by 2010 families who had lost property in the 1949 and 1978 expropriations had taken their cases to the supreme court. They argued the return of their land was required because the government never used Valdanos for the original intended purpose of a military base.

No re-developer was ever found and Valdanos was eventually opened to the public in 2011 where it has sat ever since. 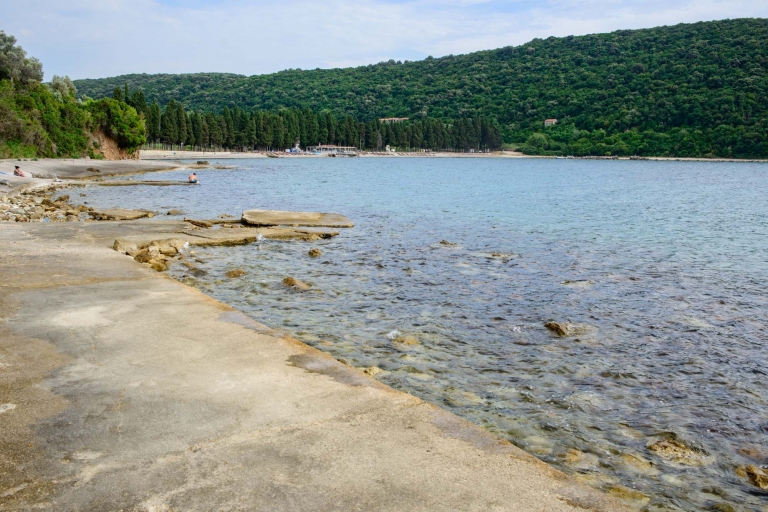 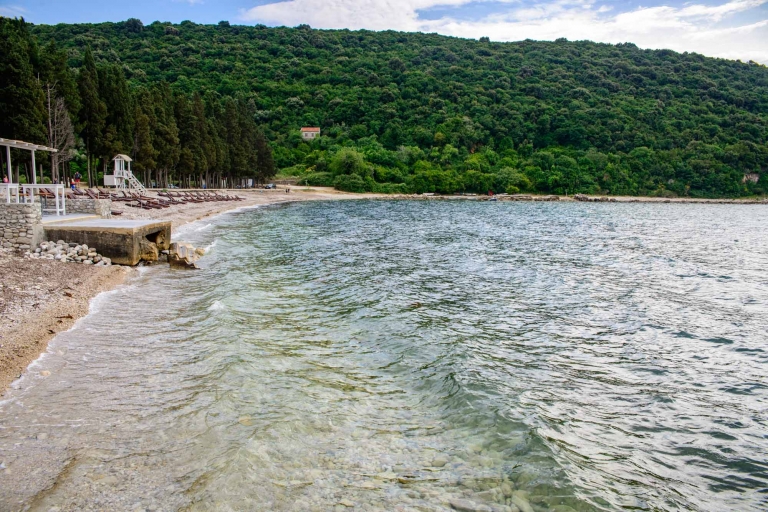 Lying between the two hills of Mavrijan and Mendre, Bay Valdanos is situated roughly 4km north-west of Ulcinj.

In order to get there, you’ll need to travel through the Olive Groves. 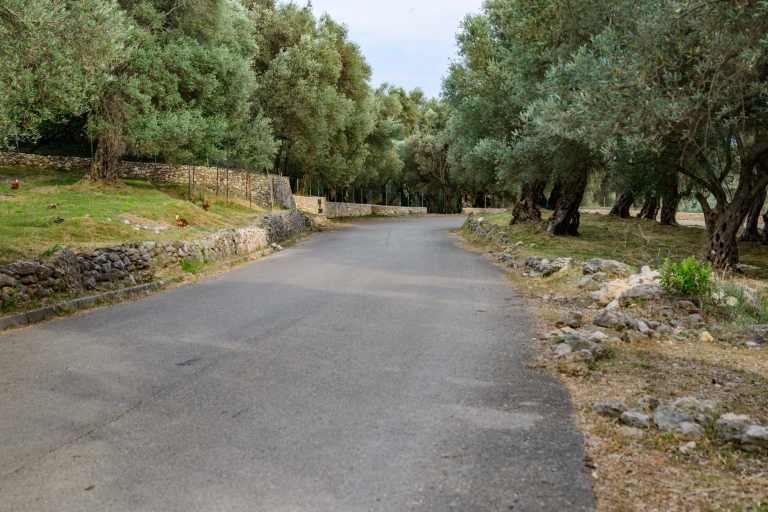 Driving through the olive groves to get there

You’ll definitely need transport to visit this lesser known delight. We found driving in Montenegro no problem and would absolutely recommend car hire as it’s cheap and gives you great access to the countryside.

Although you may be able to find a taxi in Ulcinj, I would recommend booking return transport because Valdanos is a long walk from anywhere! 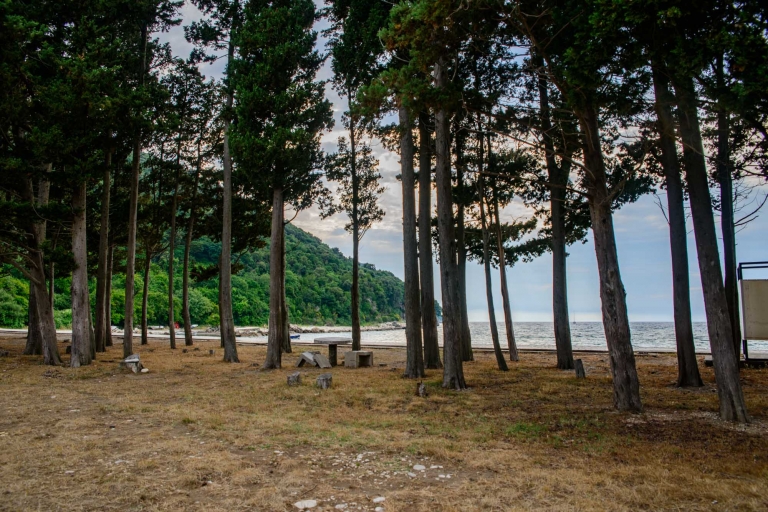 The car park behind the cove and beach with its broken concrete tables.

Valdanos is a horse-shoe shaped cove, protected from the north & south winds and it is reported that it served as a shelter to the ships for Ulcinj pirates. The bay from all sides is surrounded by pine trees and olive groves which means it is a perfect place to relax. 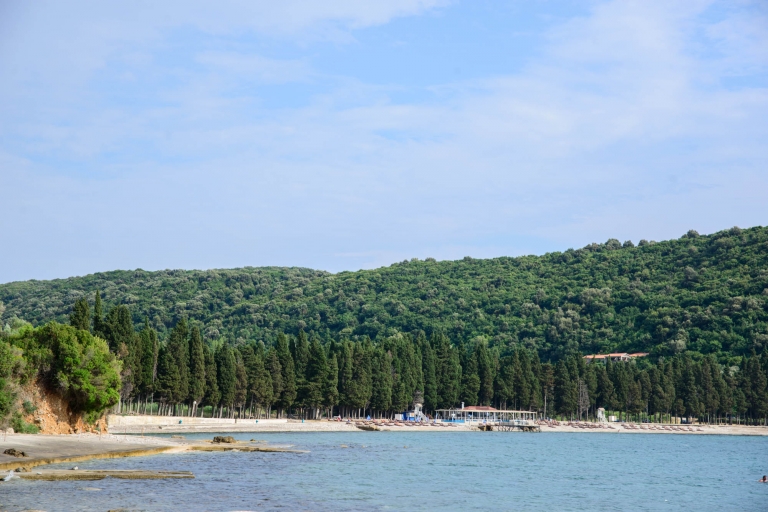 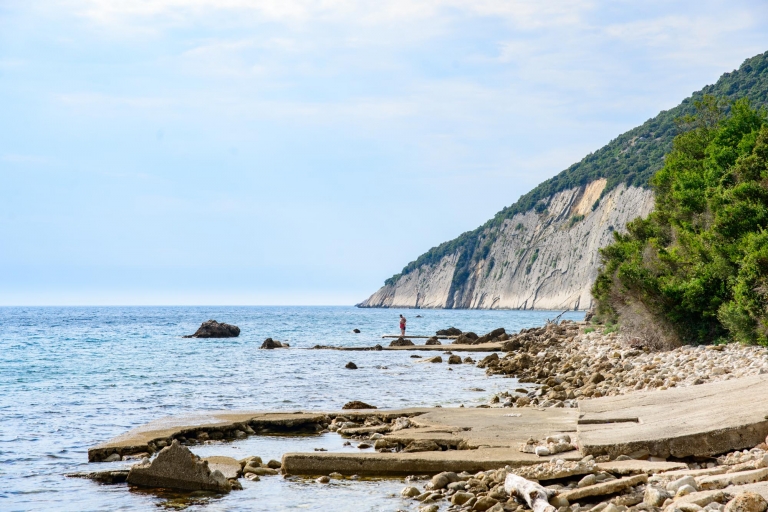 The beach is approximately 600 meters long and 11 meters wide and although the bay’s end falls steeply and suddenly into the sea the cove is great for swimmers of all abilities. the beach is mostly shingle and stone and the water is incredibly clear.

I found this drone video from 2016 on YouTube which shows how to get there and the bay perfectly.  When we visited we were only one of about five cars there and there was no bar or sun loungers. It was definitely a locals only spot to visit in June & July.

We are fascinated by abandoned places and Valdanos was a great find. There are many buildings to explore, most of which are crumbling, but you can see what a grand area it must have been.

Nearly everything is made from concrete and wood and is all designed in a very post-communist, Soviet era style. It gave us a glimpse into a world we’ve never really encountered before and it got us thinking about what it must have been like under Yugoslav rule. We’re fed a westernised view point that I often question and wonder how many happy families came here for their holidays? How many kids took their first swim-strokes in the water? What sort of memories do they have of Valdanos? In contrast, are the families who had their land stolen still fighting? Was it given back to them?

What an area of contrasts it is. 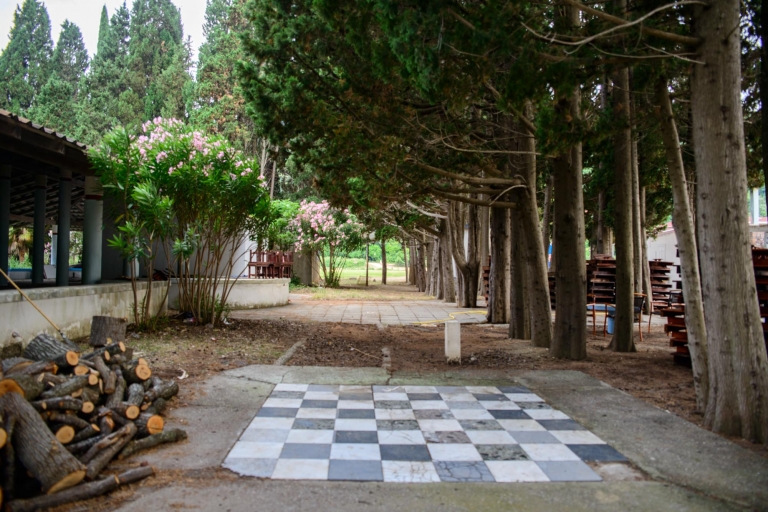 Chess board in the woods 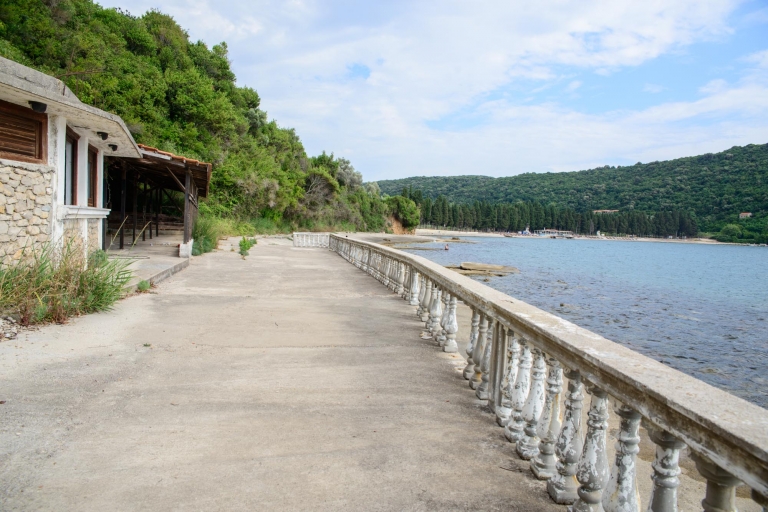 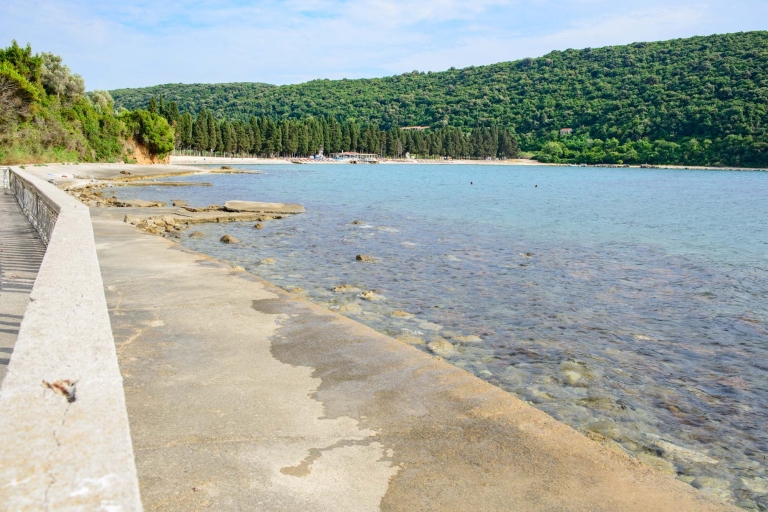 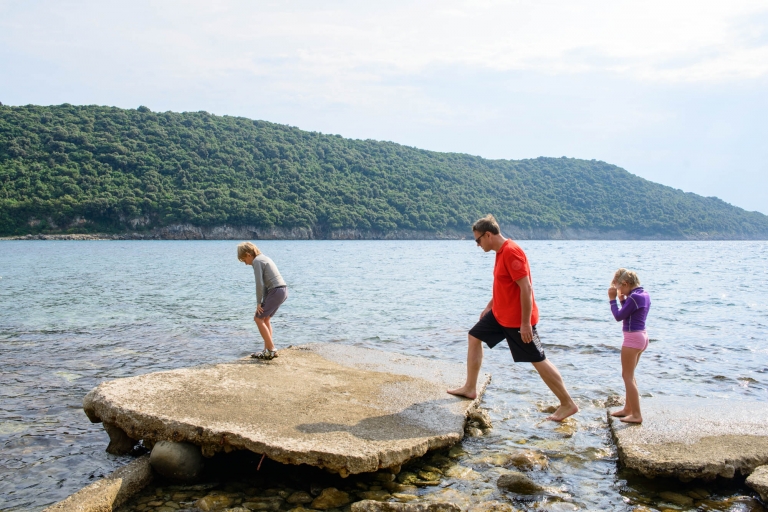 Swimming in the waters

The water was not the warmest that day but no trip to the beach is complete without a dip. So we braved the conditions, which were probably about 20*c, and the kids made friends with a local boy who was also swimming that day. Who needs to speak the same language when you have a snorkel mask and can point and smile!?

The water is really clear and on a beautiful sunny day, we would have spent far more time here. Such a pity we picked the one day it rained to visit. 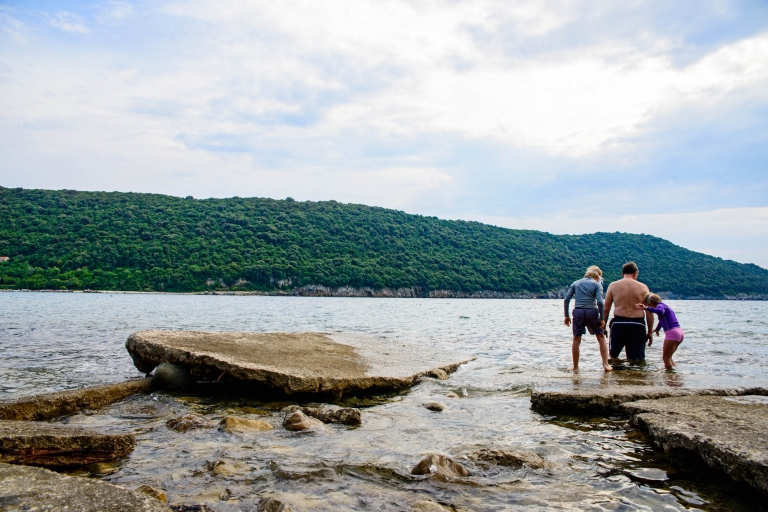 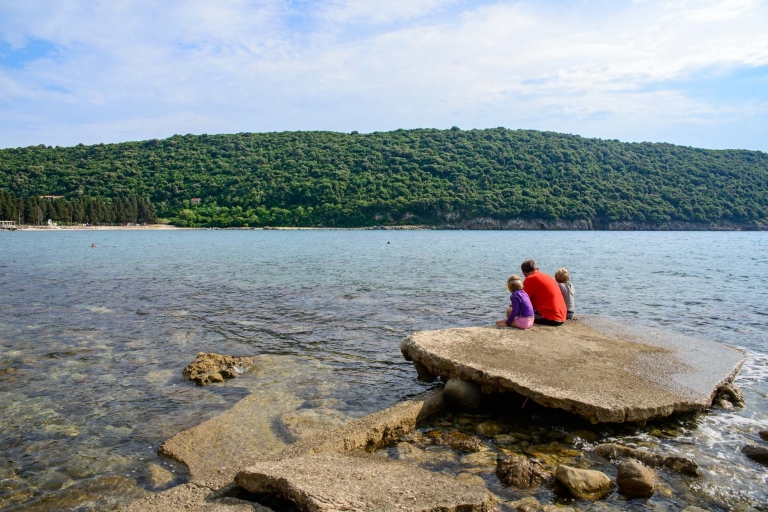 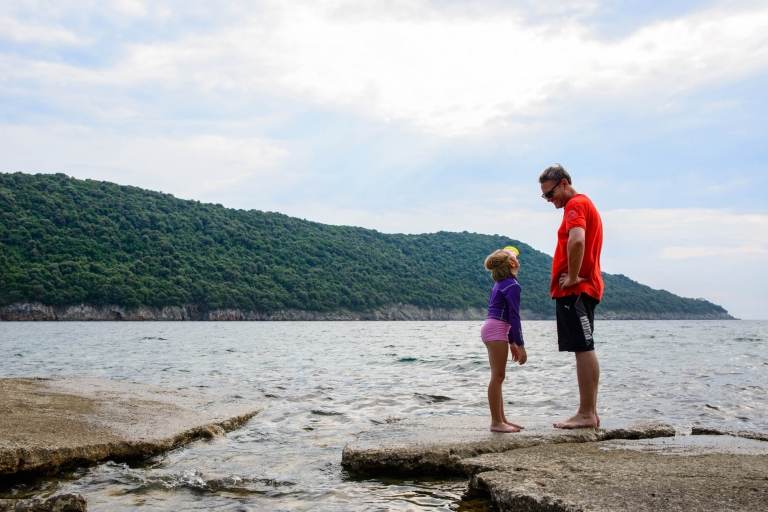 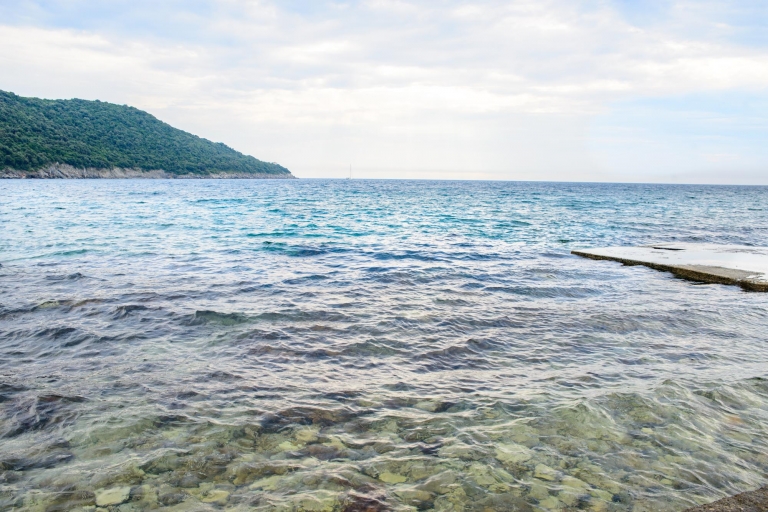 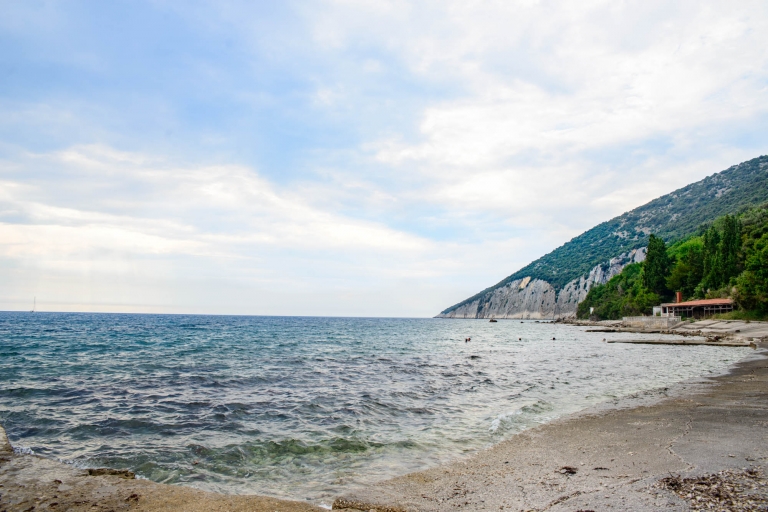 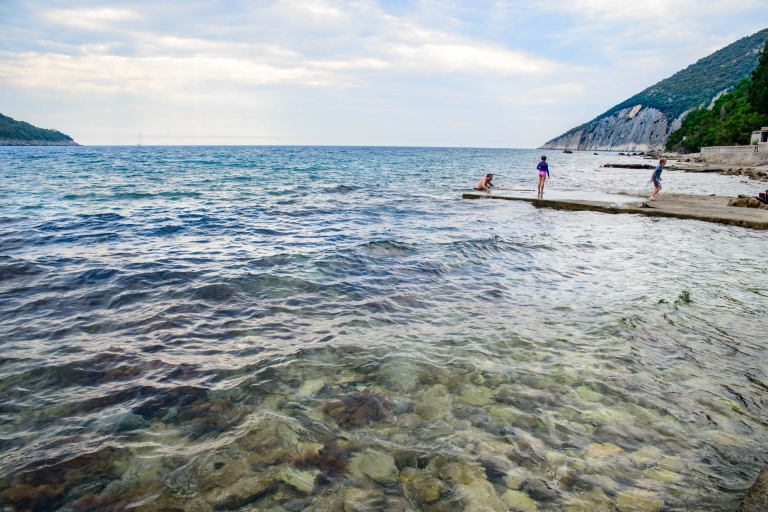 Whilst we were in the area, we drove up to the viewpoint to see the bay from above. You can really see why it was used by pirates to protect their boats.

If you get up there, watch out for the goats! They’re everywhere. 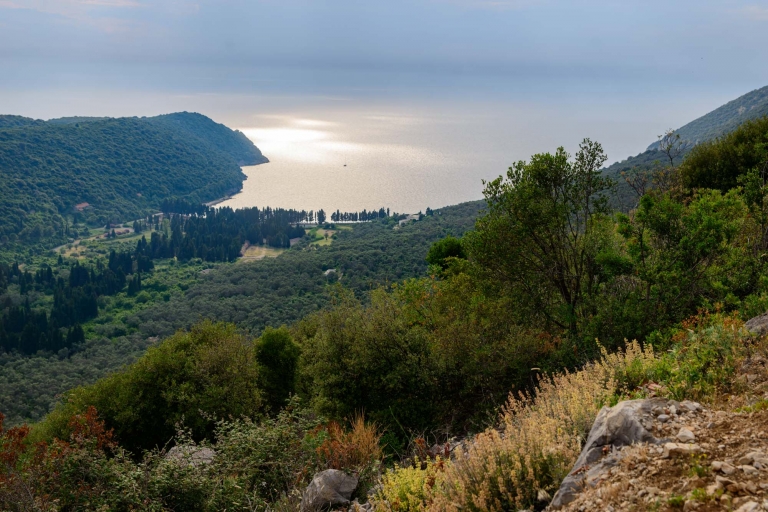 Valdanos from the view point

Please spread the love and save this pin to your board so others can find it too. 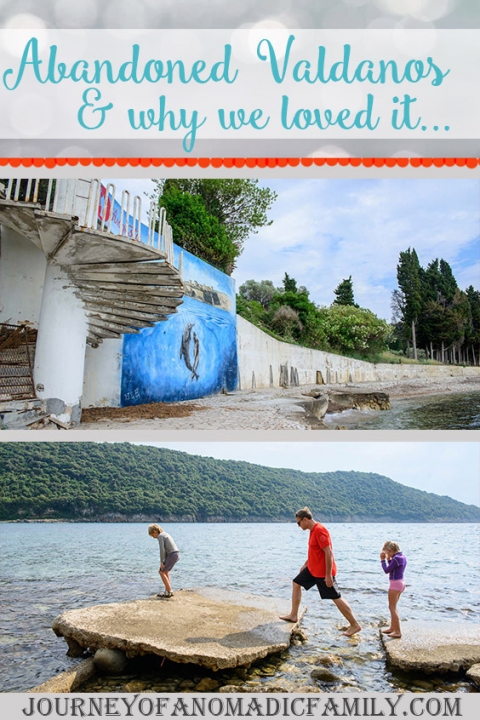 Other posts on Montenegro

Here are some of our other posts from Montenegro.