Ideas On What To Do On Your Bahrain LayOver With Kids

We recently flew with Gulf Air to Sudan (what an amazing place!) and decided to have a long Bahrain layover en route there. It’s quite a small island located to the east of Saudi Arabia and benefits from near all round year sunshine. If you’re headed to Bahrain with kids and you’re wondering what on earth you can do on a lay-over with them, we’ve compiled a list to help you.

We caught a flight from Heathrow to Bahrain with Gulf Air, thanks to Skyscanner. Flights cost nearly £400 less booking through them, than directly through the airline.

We flew at 10pm, arrived into Bahrain at 7am and had 17 hours in Bahrain.

How Much Do Bahrain Visas Cost?

There are two ways to apply for a visa; online and on arrival.

The Bahrain Government website is a bit 1990’s ‘I wrote it using dreamweaver‘. You need to select ‘Apply for evisa‘ on the top left hand side and fill in the drop down options. You need to click ‘apply for evisa’ then fill in the captcha code at the bottom of the page and then re-select ‘apply for evisa’ again. It took me a while to figure this out. You pay a deposit of approximately £4-5 and they send you an email requesting the payment.

We decided not to apply beforehand and actually got a cheaper deal by applying on arrival, which took about 10 minutes. The cost was $65 (for all 5 of us), we paid in American dollars and he gave us Bahrain Dinar as change.

The Best Way To Get Around Bahrain

Bahrain is a tiny island and it takes just a few hours to visit in a car. Here’s some suggestions on how to get around:

You can not only rent a driver but you can book an entire day trip around Bahrain.

Pick up a taxi

There are loads of taxis around the airport.  By law, taxis in Bahrain have to use a payment meter however many will hide the meter and make up prices.

If you wanted to pre-book a taxi, you can download the app Bahrain Taxi  or pre-book one online. The cost of petrol is very cheap in Bahrain and in 2019 cost 27p a litre!

We decided to hire a car through RentalCars. Bahrain has a small airport and all of the car rentals are located in the arrivals hall which also has a Costa Coffee!

Renting was simple and we got a small hatchback for £59.88 which included full insurance of £31.60. The deposit was 150 Bahrain dinar which I paid with an AquaCard .

Where To Go & Things To See

This is a small selection of the major things to do on Bahrain, that our kids found interesting.

Most places kids are free although adults are charged. You’ll need cash to pay for all the historical and museum attractions. Visa & Mastercard is widely accepted throughout Bahrain and we paid for our meals with our Revolut Cards.

Soak Up The Sun At A Hotel With Private Beach

If you’re not interested in sightseeing and fancy relaxing on a private beach with a few cocktails, head to the Amwaj Islands. Just a 15 minute drive from the airport, the Amwaj Islands host a range of hotels ranging from medium budget to luxury!

The Art Rotana Hotel was recommended to us although The Grove Resort is cheaper. Both have private beaches.


For the Ultra Adventurous

How about ticking off two countries at once during your layover? You can actually drive over to Saudi Arabia. The city of Al Khobar is the nearest and has a huge corniche waterfront with cafes and playgrounds. The city also has a Water Tower, a Science and technology centre and a museum exploring the Suadi oil industry. 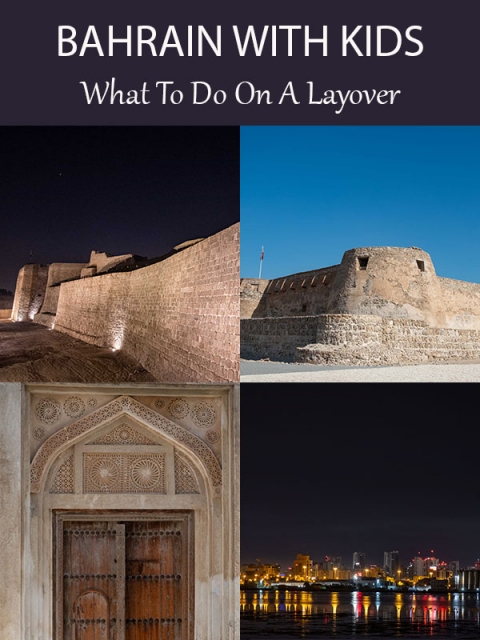 Don’t Leave Us Just Yet

See what else you could get up to around the world

Spread the love
Posted in Bahrain

« Everything You Need To Know About Renting A Car & Driving In SudanSailing On A Felucca To The Philae Temple, Aswan »

© 2021 Journey of a Nomadic Family|ProPhoto theme