Sailing On A Felucca To The Philae Temple, Aswan

Sailing On A Felucca To The Philae Temple in Aswan was the best part of our trip to Egypt. I found Egypt particularly challenging to travel and this was the only time I was completely at ease and didn’t feel that someone was likely to try and con me in some way. Being out on the water was a peaceful and relaxing experience and seeing the Philae Temple, which was moved to save it from flooding, was a positive memory. We took two of our kids on this trip, aged 9 and 10, and they thought sitting on the boat’s roof was the best part of the trip. So if you’re off to Aswan, you might want to consider taking a felucca out onto the Nile.

Aswan’s banks from the Nile are colourful but somehow look even more dilapidated than on the ground, although at least there’s no chance of something falling on your head!  The Nile is much more striking than I imagined.  Rocks which look like they’ve been scantilly dropped adjoin the waterway alongside tall, cream plants whilst the orange hue of the semi-barran, sandstone mountains give an apricot glow to the landscape.

You’ll pass the Nubian village which looks enticing but it’s been decorated by travelling artists and not by the Nubians. The art work is pretty to look at but isn’t really authentically Egyptian. The Nubian village is full of stuff the UN has given the people to sell alongside starfish, coral and sponge raped from the nearby red sea. Dead crocodiles farmed locally have been stuffed into positions to make them sellable to tourists whilst camels and other animals queue up in the heat waiting to be used as attractions for riding. It all stinks (metaphorically of course) of political involvement dictating how the Nubians should make a living being a tourist attraction themselves. I want to see how they cook and prepare food, I want to know about their history and see how they live and dance and sing. I want to understand them and their culture not have them tugging on my arm begging me to buy a dead starfish.

The further south we ventured the quieter it became. The wind glided gently over the side of the boat with the tiniest of waves lapping at the hull. I put my hand in the water but I’ve been warned about pollution and crocodiles. I’m not sure which one scares me most! The chances of spotting a croc are incredibly slim so far from Lake Nasser where the new dam has pushed them to. I’d love to see them too because the Nile Crocodile is a huge beast and native to fresh water.

As you float around you can see just how much the Nile shrinks and rises, in some places over a metre in height. The water marks make a dark tide line on the otherwise pale sandstone rocks.The Nile is an essential source of life to about 95% of the country’s 97 million people living along its banks and it is already estimated that by 2050, the Nile could be running dry.

Our kid’s best part of this trip was not the incredibly old temple or the beautifully hand-carved inscriptions, nor was it watching the boats float by. It was sitting on the roof, on a flimsy deck-chair and resting their eyes in the sun! Unbelieveable lol.

The first site of the temple you get are of low level, flat topped buildings that look more like a factory and little like a temple. The sandstone blocks have weathered well and it’s only when you’re level with the temple that you see the pillars of the main courtyard.   A line of steps that dissapear into the Nile’s water greet you as you pull up in your boat. In fact the only way to visit the Philae Temple is by water.

The Philae Temple or The Temple of Isis which celebrates the Goddess Isis was built around 690 BC and is one of the last outposts where the goddess was worshipped. The cult of Isis continued until at least AD 550. In its prime, it was considered to be one of the most sacred of all temples, by both the Egyptians and the Nubians. This was essentially because they believed that Osiris had in fact been buried on the island where the temple stood. Nobody other than priests were permitted to dwell there, and legend has it that no birds flew overhead, and that even fish and other aquatic animals never approached the shores of the island.

Although you may think this temple is purely Egyptian, it is actually a mix of Ancient Egyptian and Macedonian (Greek) Roman.  The oldest of the temples on the island was built by the last of the Egyptian pharaohs (Nectanebo II, who died in 343 BC). His successor was Greek (Macedonian) however quickly realised that if he wanted to rule Egypt he would have to dress & behave like an Egyptian; worshipping their gods and building in their style. In turn Augustus and Tiberius added decorations and later Hadrian added a gate to the Philae complex.

During the last Roman rule the ultimate hieroglyphics were inscribed on the temple.  There’s one inscription in particular that mentions a date and so it has been officially declared as the last written Egyptian hieroglyphs. It’s official name is – the Graffito of Esmet-Akhom – and is dated August 24, 394 AD (the date of birth of the god Osiris) however I can’t quite figure out who Osiris is, other than Isis’ brother which doesn’t make sense!

There are other monuments here, as well, including The Kiosk of Trajan, the Chapel of Osiris, The Temple of Horus, The Temple of Hathor, The Gateway of Tiberius, the Gateway of Diocletian, and the Temple of Augustus. The temples of the island were neglected, and some of them even destroyed, after the persecution of the Christians by the Roman Emperors. During the reign of the Emperor Justinian (527-565 A.D), the main Temple was converted to a church.


The northern end of the Philae complex holds various Roman and Byzantine remains including two Coptic churches, the remnants of a monastery, and the ruins of the Temple of Augustus.

The temples were saved  by UNESCO’s rescue project during the building of the Aswan High Dam, and were transferred block by block from their original place on Philae Island to Agilika Island, 12 kilometers south of Aswan. Don’t be foolled by local guides telling you that stubs of wood opposite the island show the original place of the temple. Most will do and say anything for a baksheesh! 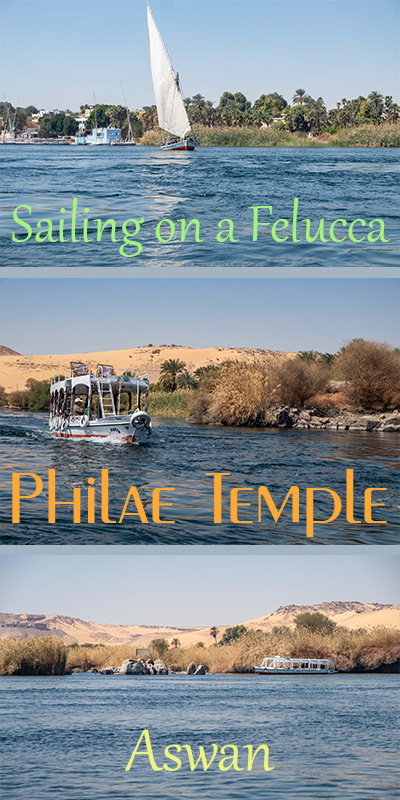 It takes about 30 minutes to get down to the Philae Temple on the Feluccas. They’re not the fastest but that’s the beauty of them. Soak up the sun, take in the sights and take your time. It’s peaceful on the Felucca and on the Nile in general.

Most boats comprise a lower and upper deck. You can sit on both although don’t expect the seats on the upper deck to be fastened down. I did not ask for a lifejacket and I should imagine they don’t have any.

The temple is not really pushchair friendly as most of the ground is uneven. It doesn’t take very long to look around the site, so I’d give yourself about an hour. 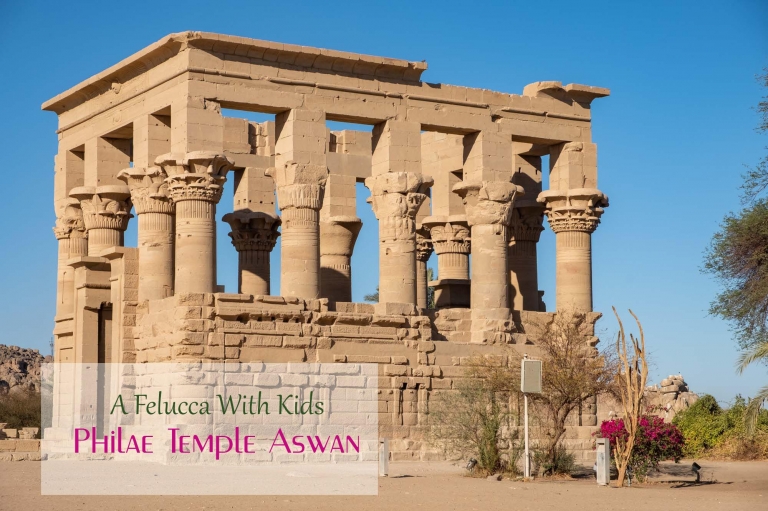