We discovered that renting a car in Sudan is notoriously difficult. Most car rental agencies in Khartoum don’t have a website and won’t rent a car without a driver. So what can you do if you want to rent a car and self-drive Sudan? We’ve done the hard work for you and found some solutions. Read on if you want to travel Sudan independently.

Sudan has been hit hard and unfairly by financial sanctions placed on it by America. This means that they cannot have access to any Visa or Mastercard payments and that in fact they pretty much cannot do business with the outside world. This makes it incredibly difficult for tourists to pre-book anything before they set foot in the country which is a nuisance for both the business & the buyer!

Some of the issues we faced were businesses with little or no access to internet, no websites, out of date phone numbers, no means of contact, no ability to pre-book and generally a difficulty in pre-planning any travel.

Quickly we learned that most car rental agencies necessitate rentals with a driver and due to some communication problems we had no idea that we’d hired a car that was limited to 100km per day and that wasn’t allowed to leave Khartoum!

We arrived in the car agency office, spent 3 hours there and after having a tantrum in the middle of the office, the best we could negotiate was a $100 per day rental with a driver. In comparison, driving in Morocco, Jordan and Bahrain was significantly cheaper but the owner wouldn’t budge and told us it was just too dangerous. I later discovered this wasn’t quite as a factual as he’d made out!

Which Car Rental Agency Did We Use?

We hired a car (and a driver) through Abu Tarha which has an office at the hotel Grand Holiday Villas. We paid $100 per day but this excluded all diesel and any other costs such a road tolls.

If you contact them through the contact page, be aware their emails will go into your spam folder. Rich didn’t realise he had a spam folder and because of that we missed that crucial email telling us we’d have to hire a driver.

Top Tips On Hiring A Car With A Driver

Because you cannot put down a deposit these guys have no way of knowing whether you’ll be actually turn up or not. Our top tips would be:

Agencies That WILL Rent WITHOUT A Driver

I’ve since discovered two agencies that will hire a car without a driver.

The Quality Of Driving in Sudan

The driving in Khartoum is selfish and impatient. From the two lanes of traffic, drivers will create four lanes and try to barge their way around the traffic. You do have to be incredibly vigilent. There are very few female drivers. In our fourteen days there we saw ten female drivers in total. There are occasional traffic lights and occasionally traffic police to control traffic. It’s manic, loud and overbearing. It is similar to other north African countries though, especially Egypt.

Once out of Khartoum, the quality of driving improves, possibly because there’s less traffic. Again, be vigilant because the majority of traffic will be lorries, coaches and minibuses and they can be unpredictable.  The tyres are never in a good condition and they frequently burn out. Tyre debris can be on the road as can lorries who’ve lost a tyre etc.

The State Of The Roads

After spending quite a bit of time in Bulgaria driving there, I was so surprised to discover that the quality of roads in Sudan is FAR better than Bulgaria.

In Khartoum the roads are a mixture of conrete and dirt. The roads are dirty and cramped and the dirt roads have frequent pot holes.

The road between Khartoum and Atbara (that goes past Naqa and Meroe) is a new, conrete road, in good condition. The road is slightly elevated from the desert around it and thus if you pull off, be careful of the drop.  Between Atbara and Suakin and Port Sudan, the road remains modern, concrete but with some pot holes and some warping but nothing too serious. Google maps is mostly correct but not always, the road between Sinkat and Getbeit splits as it is one way – not shown on the maps.

The road between Atbara and Karima is again modern, concrete with a few pot holes but really nothing serious. The road between Karima and Old Dongola is very newly built and in a good, modern and concrete condition. This is as far north as we were able to get.

The road between Al Dabbah and Omdurman is incredibly new but it is prone to being covered in sand! Google maps says you cannot drive on this road and that you must return to Karima. This is NOT correct.

Where you leave the road to 4×4 (Sabaloqa, Meroe and Naqa) expect the conditions to be soft, sandy and bumpy. Do not venture to these areas without a spade and something to use for tyre traction.

Filling Up With Petrol & Diesel

In January 2020 there seemed to be a petrol and diesel shortage and many gas stations were closed, despite google maps saying they were open. Fill up whenever you can and do not let your tank go below half full. Those petrol stations that are open have enormous queues.

Diesel in particular seems to be the worse hit which means that if you’re driving out of Khartoum to the north and north east, you will be reliant on black market diesel and you’ll need to negotiate a price before you fill up.  Gazole is the name for diesel (benzo is petrol).

Costs To Fill Up

The people of Sudan are hopeful that the financial sanctions imposed by the USA will be lifted in 2021. This means car agencies will be able to host websites and take credit card deposits.

Sudan is an awesome country so I have my fingers crossed that this will happen.

The petrol crisis seems to be caused by the $ although the people are stating it’s the fault of the government.  This article states that the prices should be “a gallon of petrol at the black market costs SDG 220 ($ 4.90*), compared to SDG 45 ($ 1) at the petrol stations. A gallon of diesel costs SDG 125 ($ 2.80) at the black market and SDG 35 ($ 0.8) at a petrol station… Activists accused the deep state of causing the fuel crisis, because the security services specify the amount of fuel for each petrol station. That should be 1500 gallons a day. However, only 900 gallons are distributed each day.”.

Other Ways To Get Around Sudan

If you can’t drive and don’t want to hire a driver, how can you travel Sudan independently?

I didn’t travel this way, although I saw plently of minibuses everywhere I went, so if you’re wanting to catch buses, head over to Bunch Of BackPackers to read how Manouk travelled around Sudan as a solo female traveller.

There is also a train service in Sudan; left for decades it is now being upgraded. The government website doesn’t appear to currently work however there are trains between Khartoum and Wadi Halfa in the north and you can read this helpful article by The Man In Seat61.

I understand there’s also a train between Khartoum & Port Sudan and Khartoum & Kassala. In order to book tickets you need to visit at least the day before your trip. The station is just off Army Road on the way to Omdurman.

Hitchhiking is a very popular way to get around Sudan but none one I could be bothered to wait for!

Book Your Accommodation In Sudan Before You Get There/h2>

Fantastic news. We can now book accommodation prior to arrival.

You Can Pin This 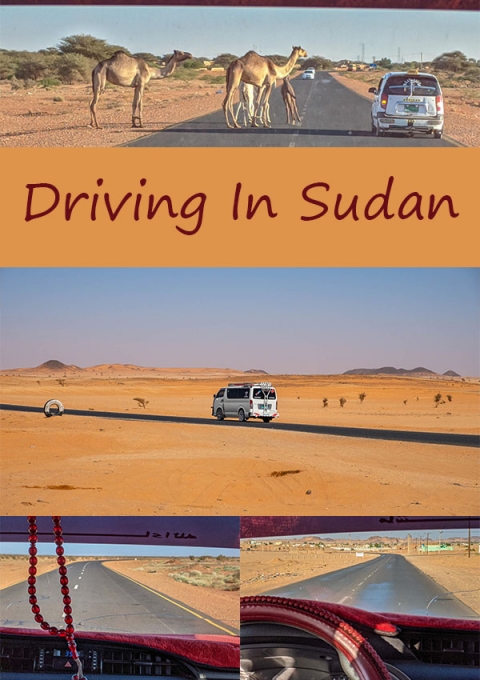