The Broken Arch Beach At Legzira In Morocco

When visiting an iconic geographical feature of a country, you don’t expect to have to have to google “Is it still standing?” but this is exactly what I should have done when we visited the natural arches of Legzira beach in Morocco. If you’re looking at finding two arches, you’ll be a little dissapointed but there’s still one you can see. 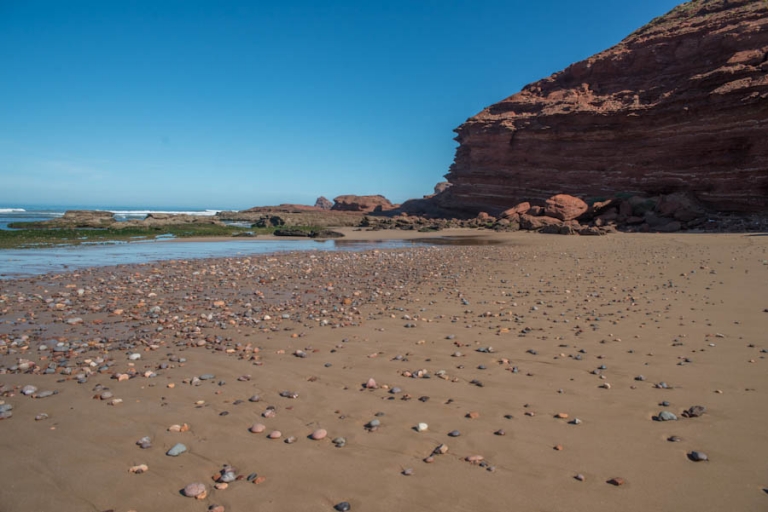 The boulders from the archway

How To Find It And Where To Park

Like the majority of southern Morocco, everybody has to ‘benefit’ from the tourists in someway and there’s the usual parking racket men hanging around there. They weren’t there when we arrived pre 10am but we left just after 11am and they tried to charge us 20 dirham. Sure this is equivalent to £1.80 but I hate them and the way they block your car whilst holding out their hand.

I gave him a 10 dirham coin and drove away. I am a lone female travelling with three kids so maybe it would be different if I had a man with me? Who Knows?

Yes, back in September 2016 the prominent, and let’s face it the more beautiful, arch on the beach collapsed.  You can read all about it here (opens in new tab).

Of course I didn’t expect that to happen so was a little surprised to find a HUGE pile of boulders in the place of the arch.  Never-mind though because Legzira beach has not one but TWO natural arches. The second is still standing and open for business as usual. 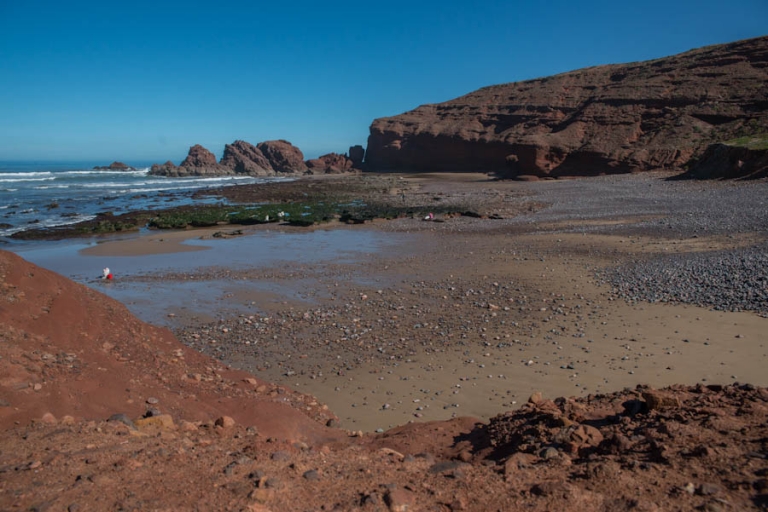 The deserted section of the beach

The Beach There Is Clean!

Despite spending four weeks in Morocco, Legzira beach was the first clean beach we’d been to. I found Morocco incredibly disappointing and I wouldn’t choose to go back because of the trash everywhere.  I’m not just talking about a few bits of rubbish, I’m talking about fly tipping to the extreme. 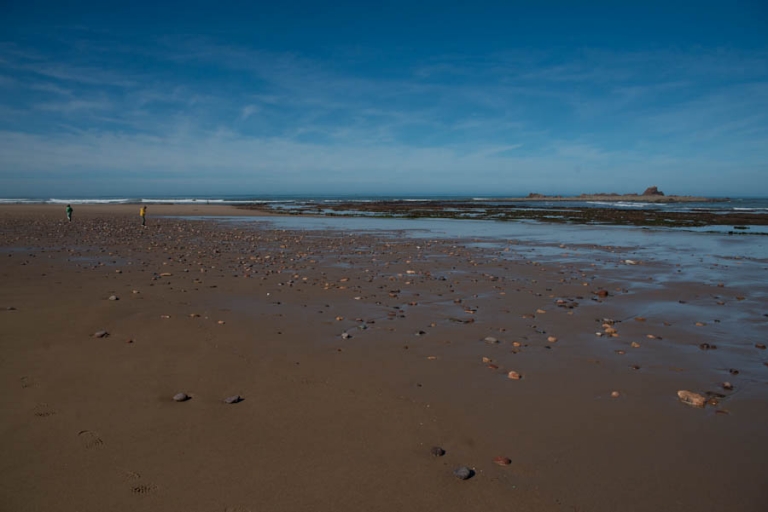 The beach at Legzira

The first arch is, or was, to the beach’s north, right as you arrive onto the beach.  You can see the huge boulders that have been left on the beach.

It is quite fascinating to look at photos on Google of how magnificent the arch was and to see now what it has been reduced to. 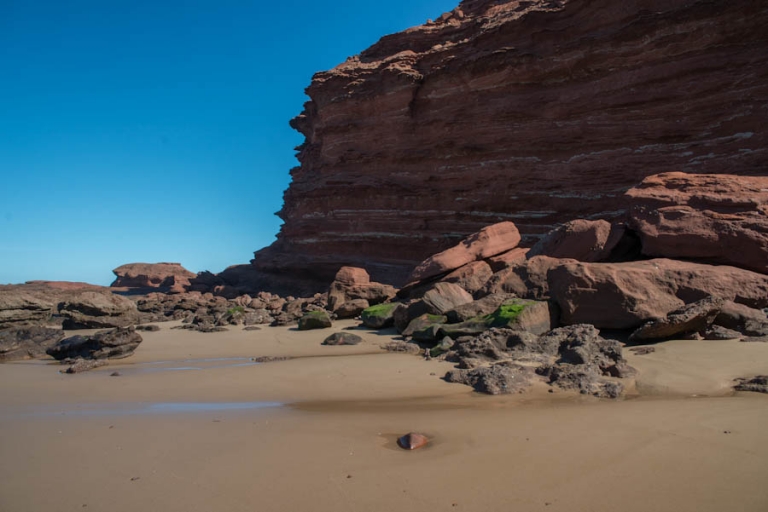 The boulders over the beach of the archway 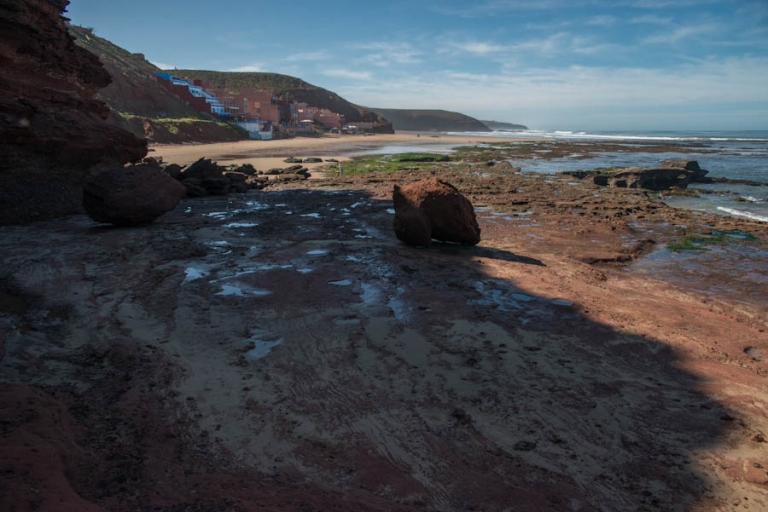 The boulders from the north side of the beach

There Are Also Rock Pools To Play In

The rock pools are directly next to and opposite what was the first arch and can only be explored at low tide.  They are full of marine life from red anaenomies to multi-coloured limpets. Not to forget green seaweed clinging to the rocks.

Our kids enjoyed playing in, jumping over and exploring the life in the rock pools. 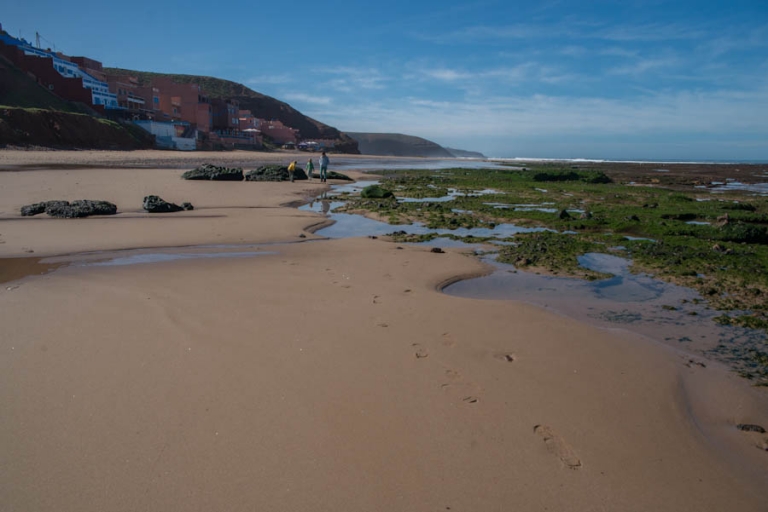 The rocks pools at low tide 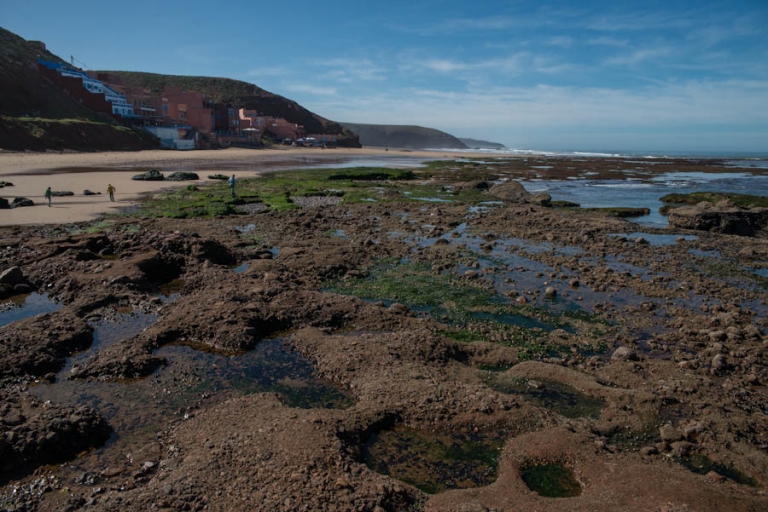 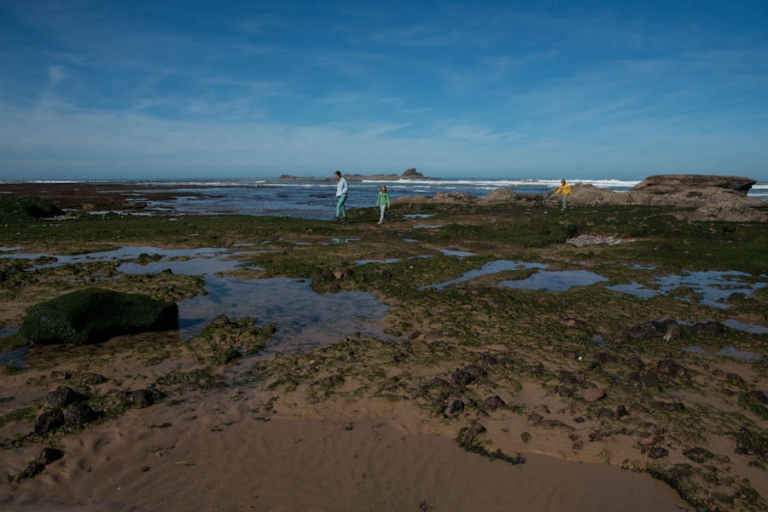 The Beach is LONG And Sandy

About half of the beach is sand and the other half more pebbley.  It’s a really nice beach and would be made all the nicer if the quad bikes, dune buggies and motorbikes weren’t on it. We went in February, which is technically winter, however the weather was still 18-22*c during the day. 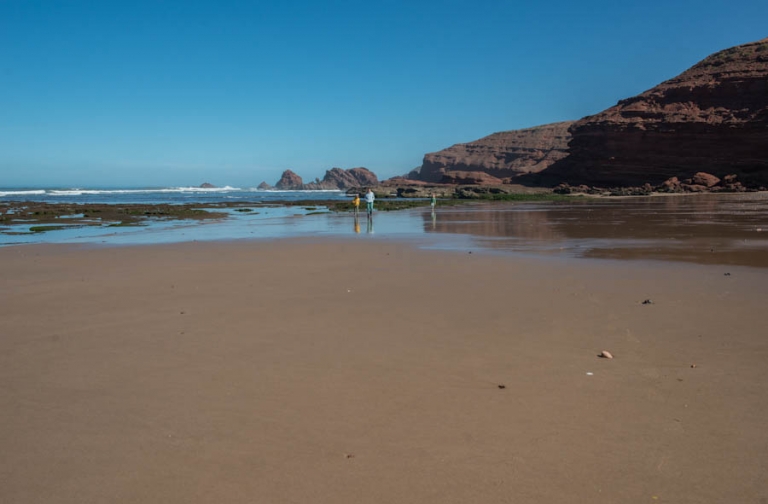 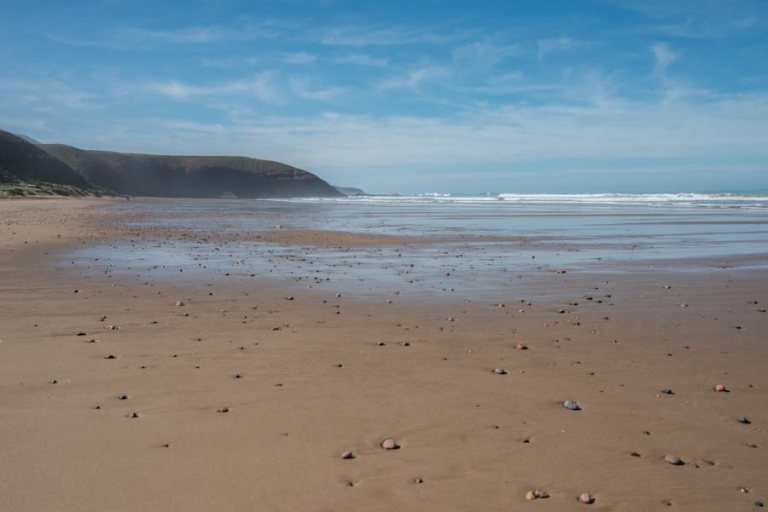 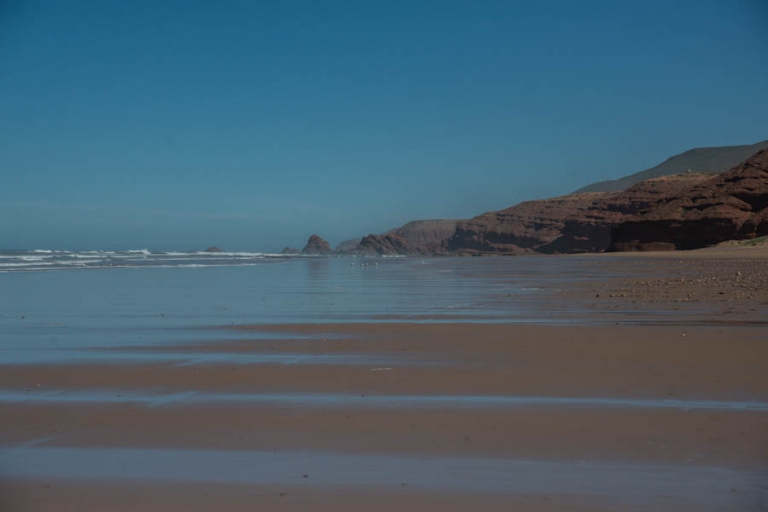 The long sandy beach from the second arch.

The Second Arch At Low Tide

The second arch is relatively new compared to the one that collapsed. When I say relatively of course I mean a thousand years or so. Certainly not in my lifetime!

It is a big, heavy and thick archway where mussels cling to the sides of the rock, showing just how high the tide comes up. 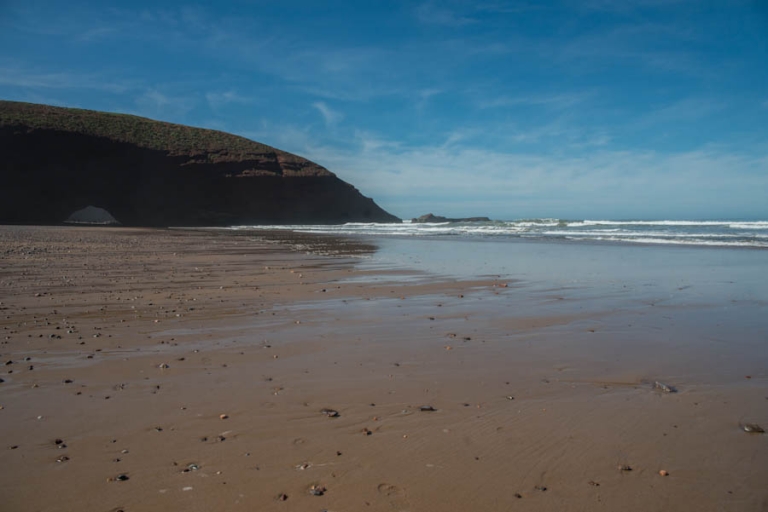 The archway at Legzira 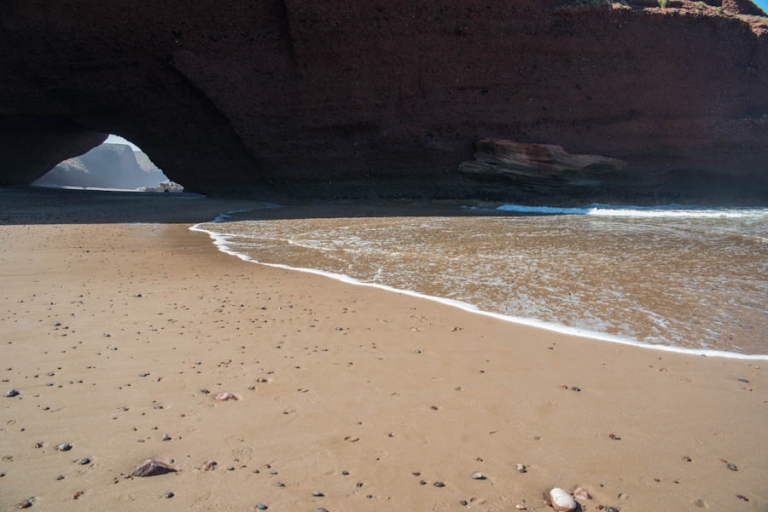 The sea lapping around the bottom of the arch

Walking Through The Arch With Kids

Walk through the archway and you’ll find another beach which in turn reveals more cliffside that leads into the sea.  ONLY at low tide should you try and walk around that part of the beach.

NONE of the area is a swimming beach. The tide here is far too strong for swimmers. Of course you can paddle and go up to chest height but the beach is not patrolled.

Walking under the arch is a bit eery. The area suddently becomes much colder and quiet. If you shout you can play ‘echo’ but apart from that it’s a unique experience. 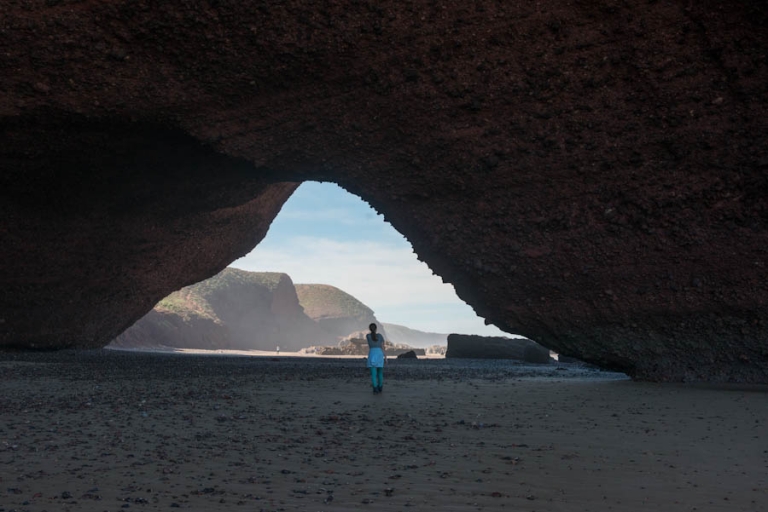 Our eldest walking through the arch 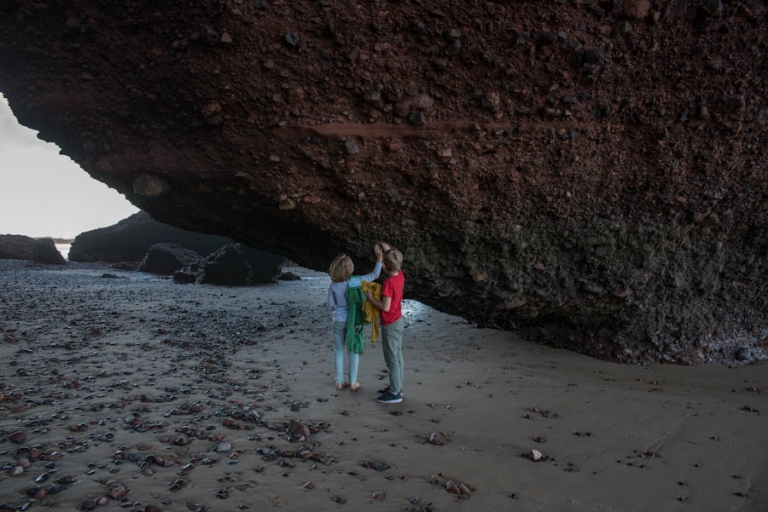 Touching the rock and its creatures 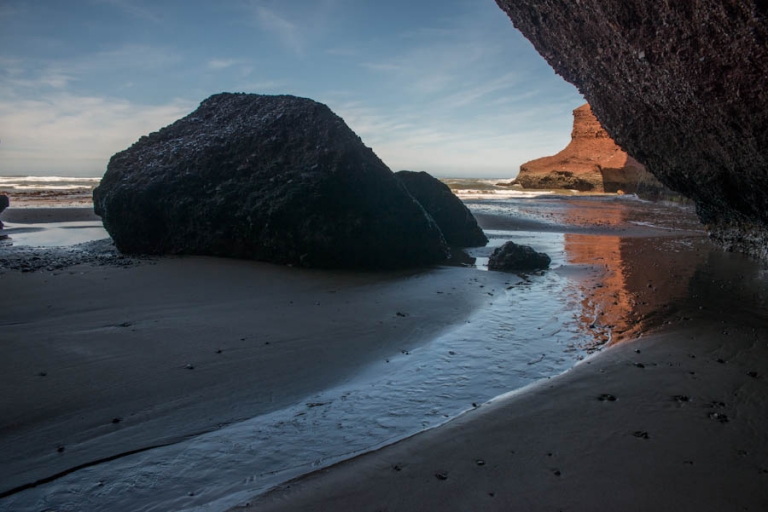 Walking through the archway to the ‘other side’.

The Other Side Of The Arch

There is a huge expanse of beach on the other side of the archway as well as some more rock pools. 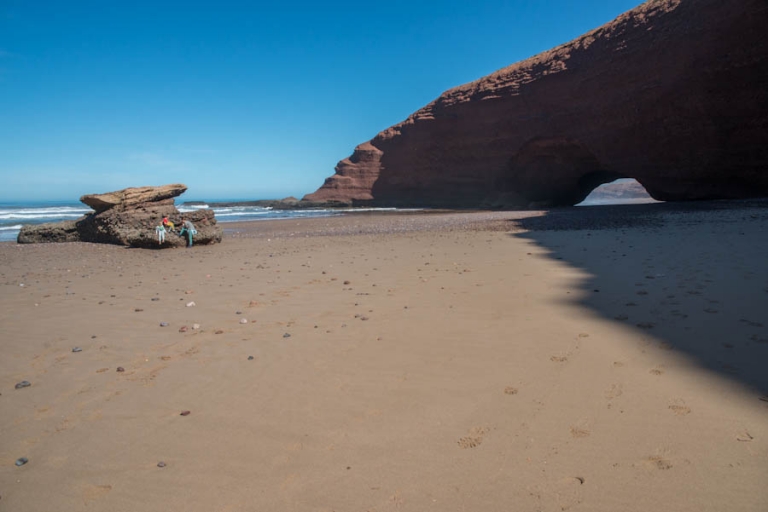 The archway from the other side of the beach 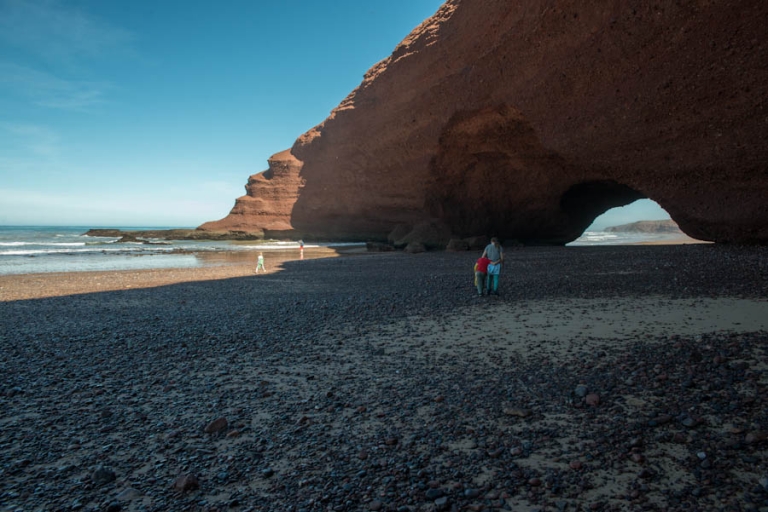 The kids walking on the beach 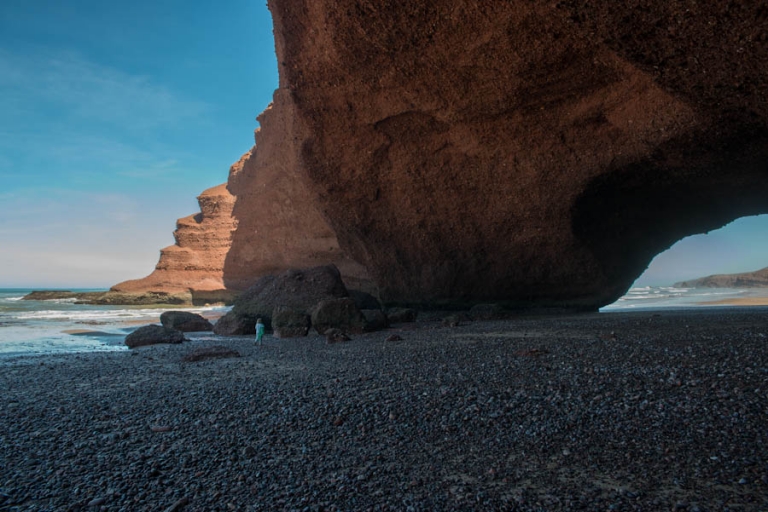 The other side of the arch way

Is There A Third Arch?

It isn’t until you’re almost level with the second arch that you notice a third arch developing in the sea. The rock here is very soft and you’ll notice that there are large indents in the rock, in lots of places, that will eventually form caves and other arches. 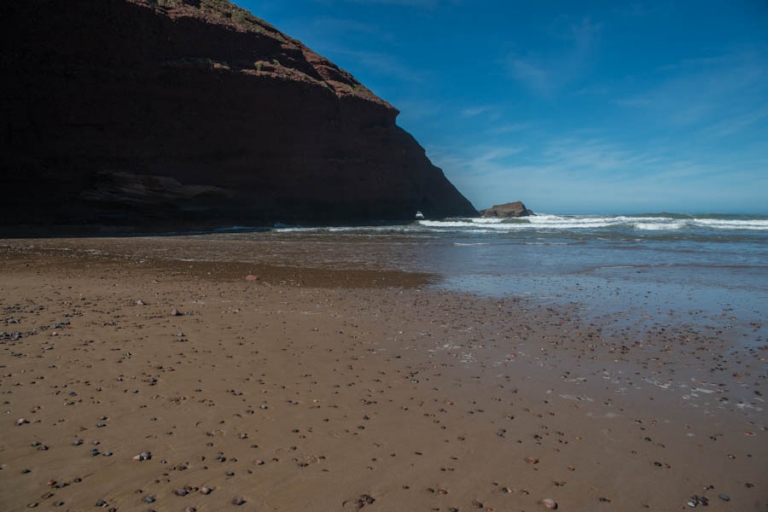 Can you see the third arch? 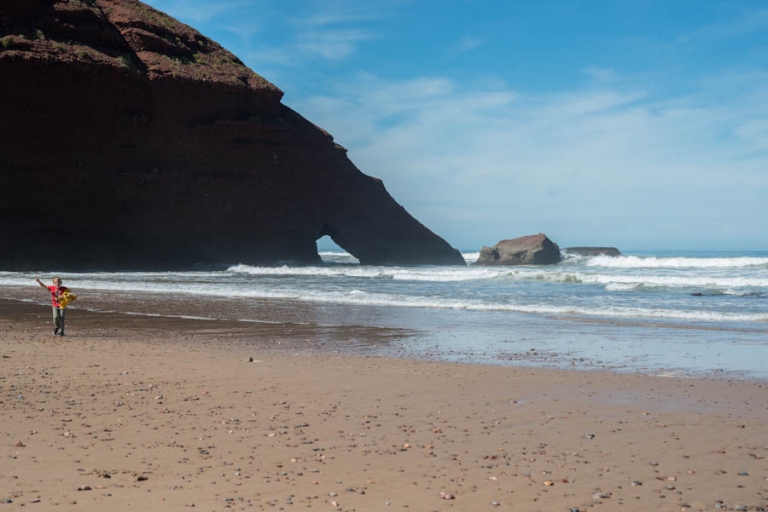 Are There People Living There?

There do appear to be people living down on the beach. Given there are people living on the side of roads in Morocco, it shouldn’t be too much of a surprise. There certainly seemed to be one man lugging some shopping through the archway, making his way across to it. 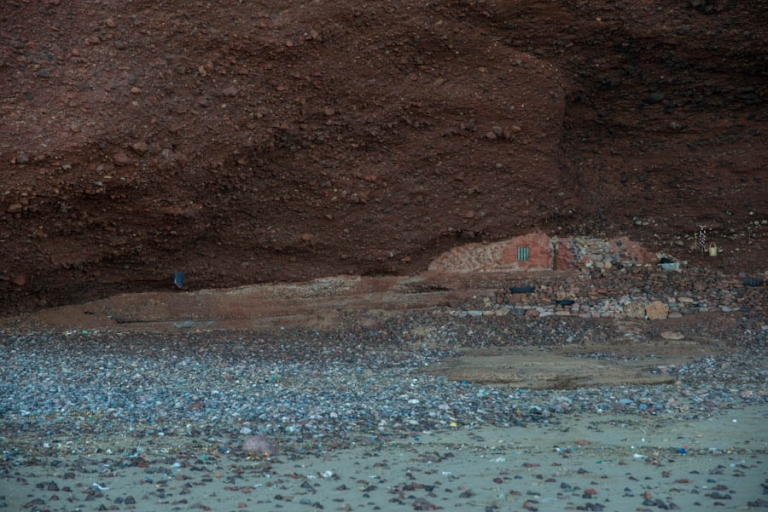 A partial house built into the rocks? 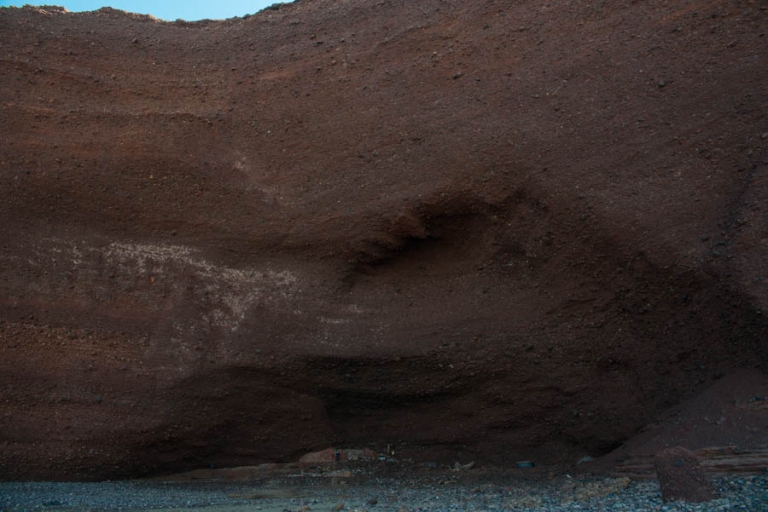 What Else Could You Do In Morocco?

Are you looking for other ideas on what to do in Morocco with kids?

Spread the love
1
Share
1
Share
Posted in Morocco
« Chasing water wheels in Madeira’s north.
The night we slept in a cave in Aglou, Morocco »