Ringing in the New Year at the Asian Art Museum

After landing in LA the day before christmas, we decided to drive up and spend New Year’s Eve in San Fran. However all of my internet searches revealed that we’d missed booking the bay cruise dinners, people actually bagged their fireworks ‘space’ up to 12 hours in advance (I am never doing that), the music events were all aged 18+ and the Discovery Museum children’s art day was too far away!

Driving into a new city for New Year’s Eve was always going to be a challenge and forever on the search for new, unique and interesting things to do with the kids, I stumbled upon the Asian Art Centre and their Japanese bell ringing ceremony.

Somehow I convinced the kids they should get up quite early, traipse half way across the city in the freezing cold to hit a super old bell with a big long stick. There may have been some bribery involved but the end result was very satisfying and we all had a great time! 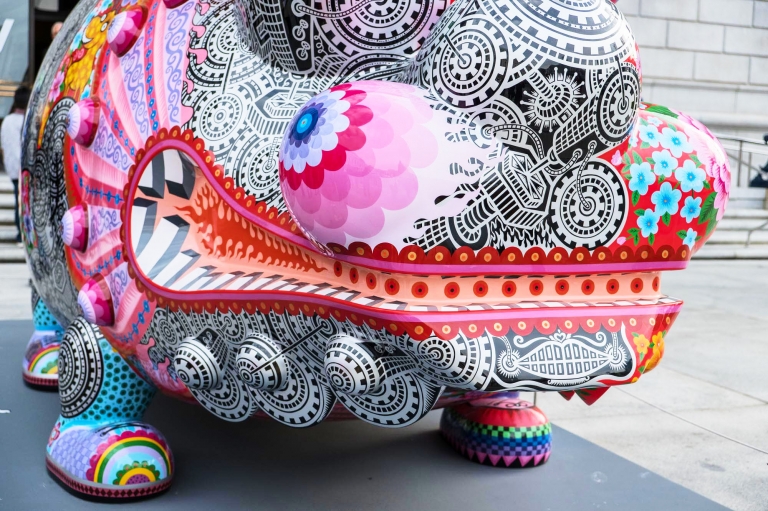 In Japan, the traditional bell ringing ceremony begins just before midnight on New year’s eve and continues into the beginning of January 1st.

Obviously that would be unfair on the art centre’s staff so the Asian Art Museum started their ceremony at 9:30am on the morning of New Year’s Eve and we trotted along quickly (mostly because San Fran was freezing cold) to participate in ringing the temple bell.

If there’s one thing I remember about San Fran, it was how cold it was. If you go, especially in winter, wrap up warm! 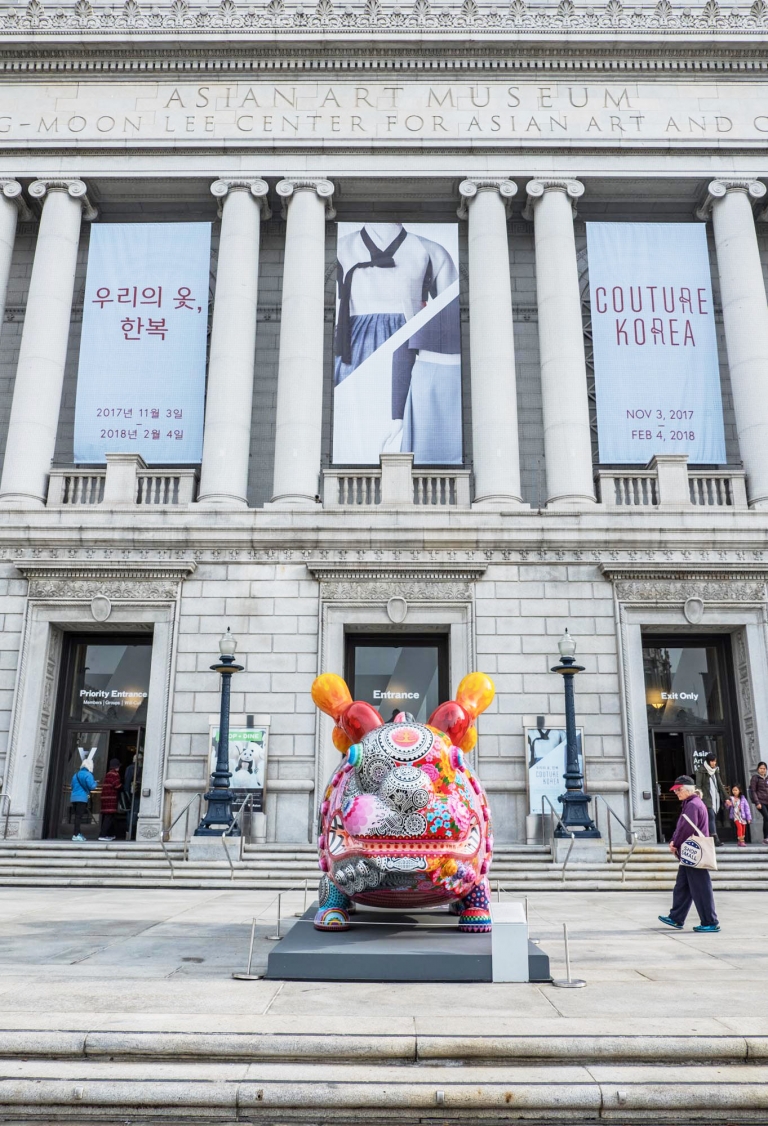 The museum is a huge, grand building

‘Joya no kane’ means ‘to eliminate darkness’ and the bell is rung 108 times to receive peace and happiness. Buddhists believe that living beings are influenced by the vibrations of the bell (bonsho) which leads to purification in their lives.

The ringing of the bell 108 times is reflective of the ‘bonno’ which we create in our lives; greed; anger and ignorance. In living our lives we burn the flame of this ‘bonno’ but man is intelligent and should actively try to eliminate these negative elements by devoting his life to the promise of reasoning and understanding.

The sound of the temple bell awakens people to the meaning of bussho (wisdom) and uplifts positive qualities. The idea is to eliminate darkness, wrong deeds and bad experiences from the previous year and to wish/pray for peace in the new year. 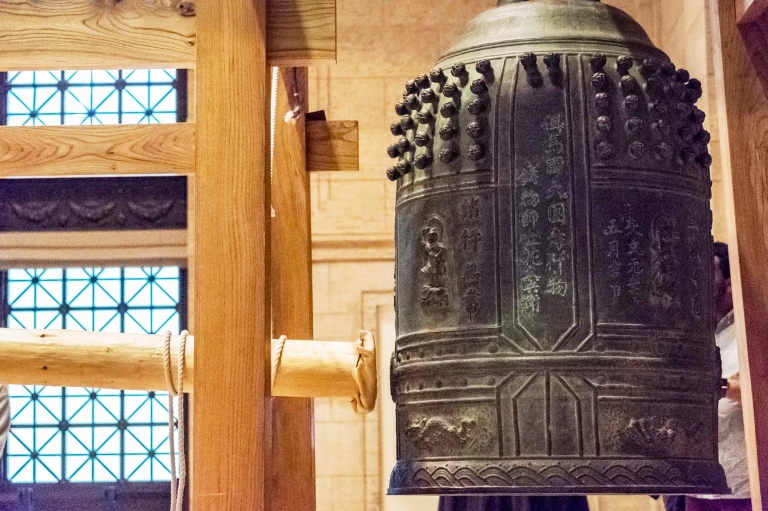 The bell, which is huge, was constructed in 1532 by Kyubei for the Daienji Temple in Tajima province and imported into San Francisco in 2002.

There are a number of Buddhist inscriptions around the bell (date, artist and temple) as well as figures and verses alongside.  The most famous inscription is perhaps from the Nirvana Sutra which reads 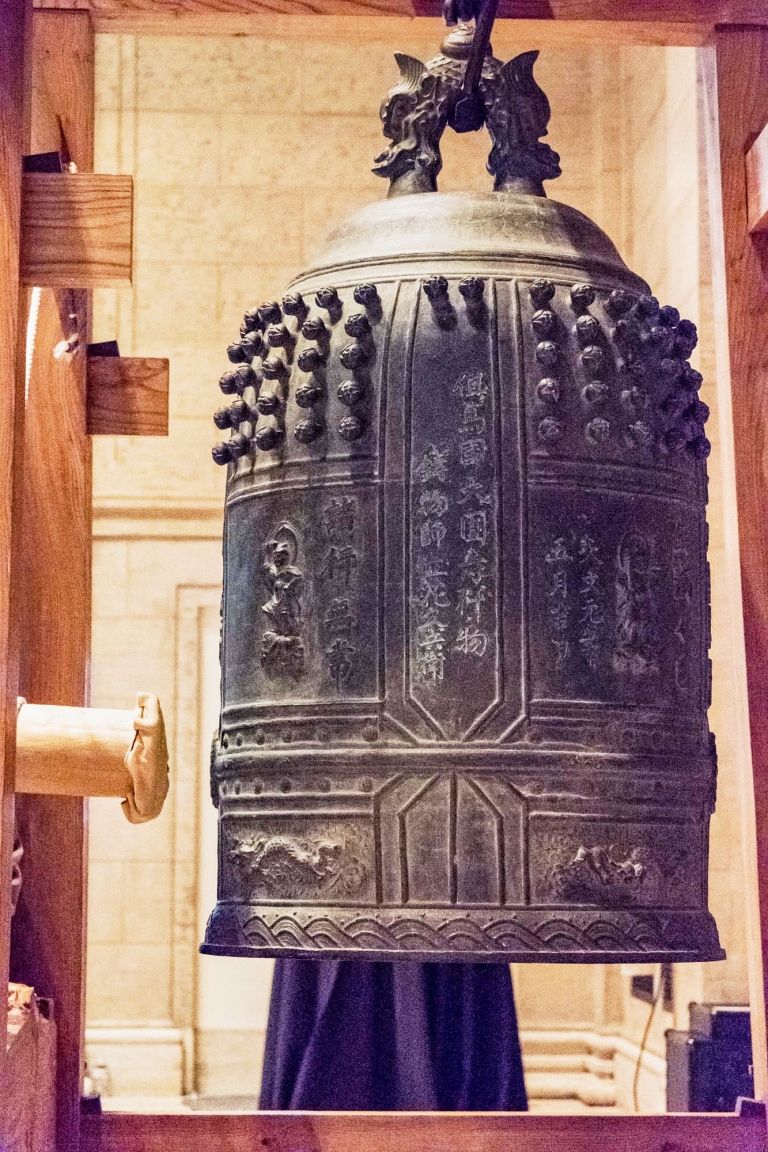 How to ring the bell

In order to ring the bell you must get there early and purchase entry to the Asian Art Centre.

You cannot pre-book a slot, unless you’re already a member of the museum, instead you must turn up and tickets are awarded on a first come first serve basis.  Once you’ve purchased an entrance ticket, you must go upstairs to the Samsung Hall and be given a numbered ticket and patiently wait your turn to ring the bell. 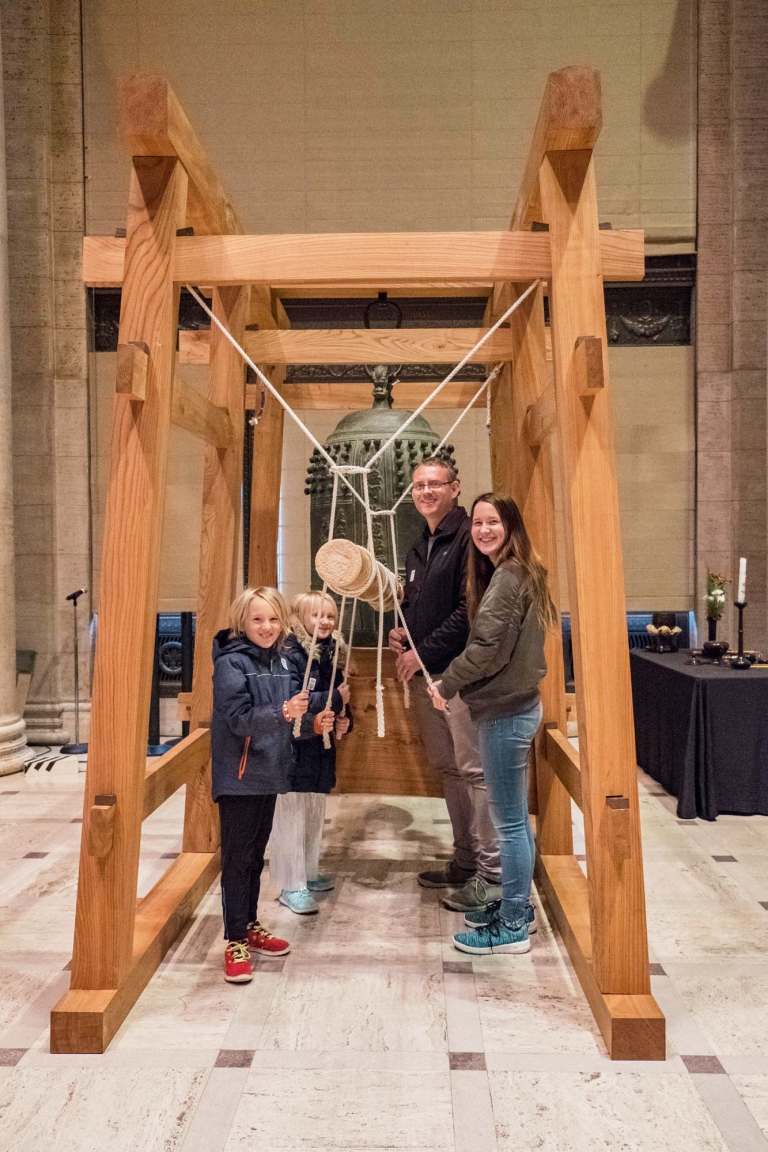 Us ringing the bell

The bell is incredibly old and thus fragile. It requires just a very small tap to make it vibrate and ring. Anything harder may result in damaging it and we don’t want that!

After waiting what seemed like an eternity, I’m not joking, our ticket was eventually called. The bell is rung in groups of six people so if you turn up just a couple, you may ring the bell with two other couples. As we were already five no other person could be found to ring it with us, so after we posed for a photo, we ever so gently lifted the wooden baton and struck the bell.

It was a beautiful experience actually. Peaceful & humbling. Just for a split second everything was perfect lol. I’m really glad we could give the kids that opportunity and even though I’m writing this ten months later, there is joy in their voices and eyes when I reminded them of the Asian Art Centre and the bell. 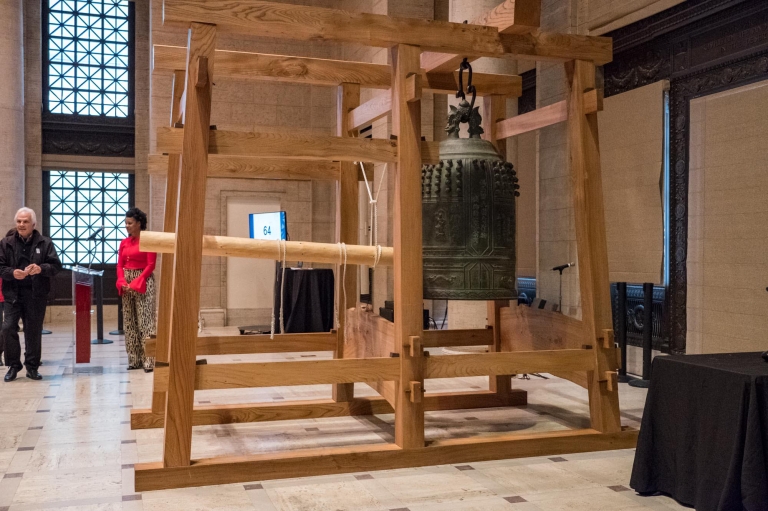 The kids had sat very quietly for a long period so after we rang the bell, we agreed to go downstairs where they had a go at origami, looked around the museum and of course the gift shop.

By that time it was still only mid-morning but it felt like we’d been up for hours. Bell ringing is exhausting! 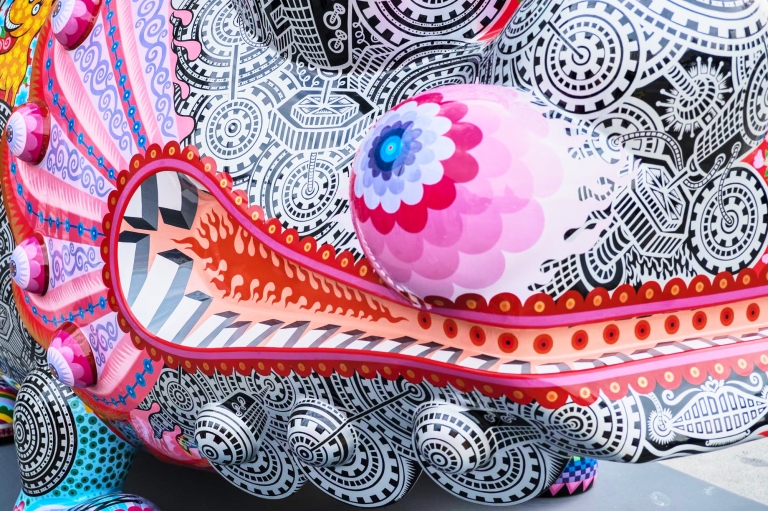 We try to keep our videos as short & sweet as possible. We know you’re busy but we’d love it if you watched just for a few minutes.

You can add this to your Pinterest board in just two clicks. 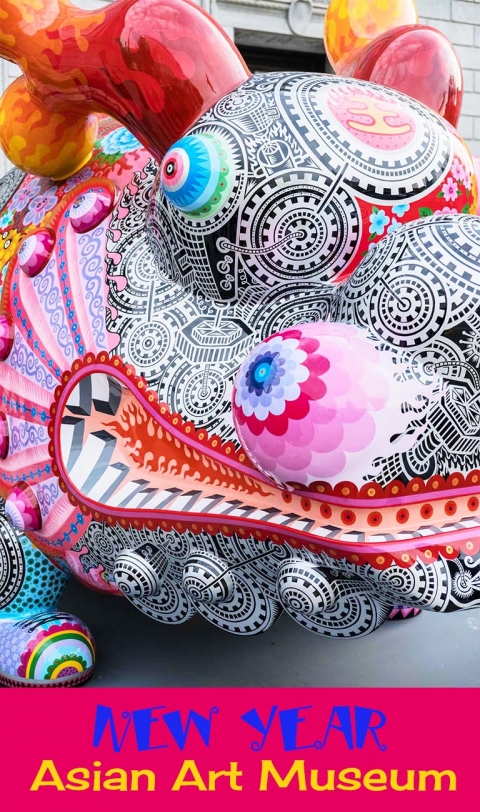 Spread the love
2
Shares
2
Shares
Posted in America
« An eerily deserted hotel at Sunny Beach
Northside Beach Club: Get To The Other Side Of Caye Caulker »