Taking Kids To The Sinti Roma Memorial In Berlin

Tucked into a quiet, tree-lined boulevard behind Brandenburger Gate in Berlin is the glass walled memorial to the thousands of Sinti and Roma people who were killed during the 1940’s.  This post is about our visit to the Sinti Roma Memorial Berlin with our kids. 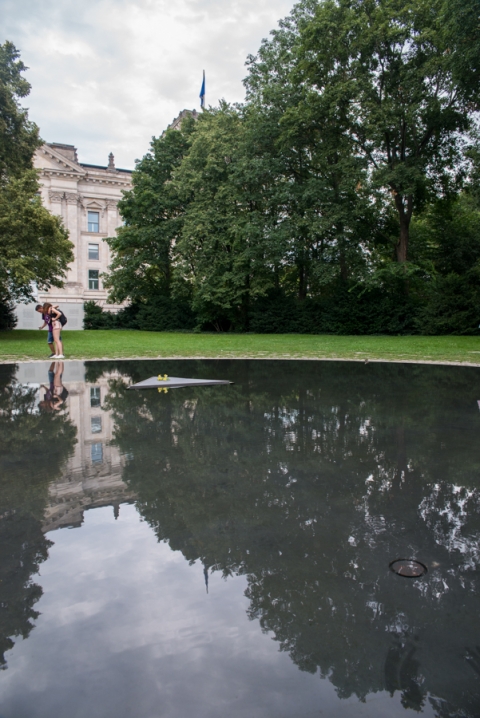 East Berlin had quite a profound effect on me, it was a very moving time and as a result there were quite a few tears, lots of silence but also lots of discussion around war and Hitler, the true meaning of socialism and why it’s crucial to stand up to fascism.  Many people shy away from talking about these things with their kids but feel it’s so important to highlight how humanity can be better and learn from its mistakes.

Many of East Berlin’s buildings still bare bullet holes and the statues have parts missing because of gun fire and whilst this had a sobering effect on us we had to remember that it was just history.

However I think what I found most hard to deal with is that as a world we seem to have learnt nothing from the second world war. The current rhetoric from many countries around the world is now about division, hatred, fear and ignorance. A select number of rich individuals have seized upon an opportunity to promote intolerance and I find it unbearable to listen to or watch. 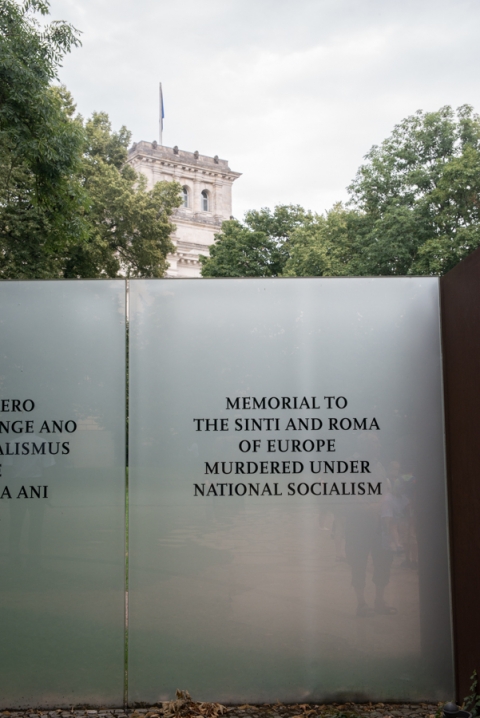 Glass walls etched around the site 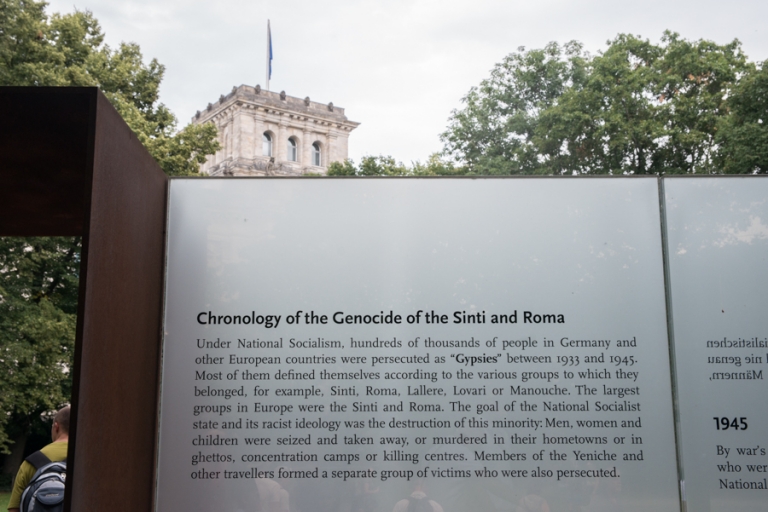 Memorial to Sinta and Roma people

The memorial was opened in October 2012 and was designed by an Isreali artist called Dani Karavan.  The memorial consists of a circular body of water with a triangular stone set in the centre. The triangle symbol is refernce to the badges worn by prisoners of the regime. In letters circling the pool is a poem by a Roma poet Santino Spinelli which says 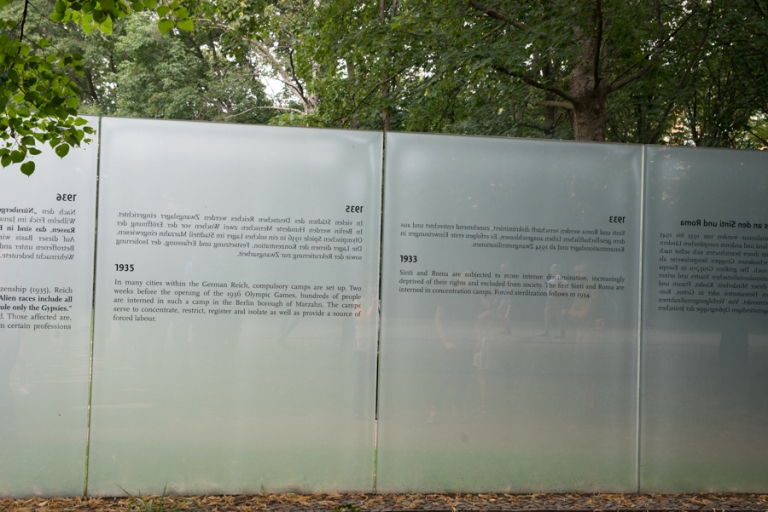 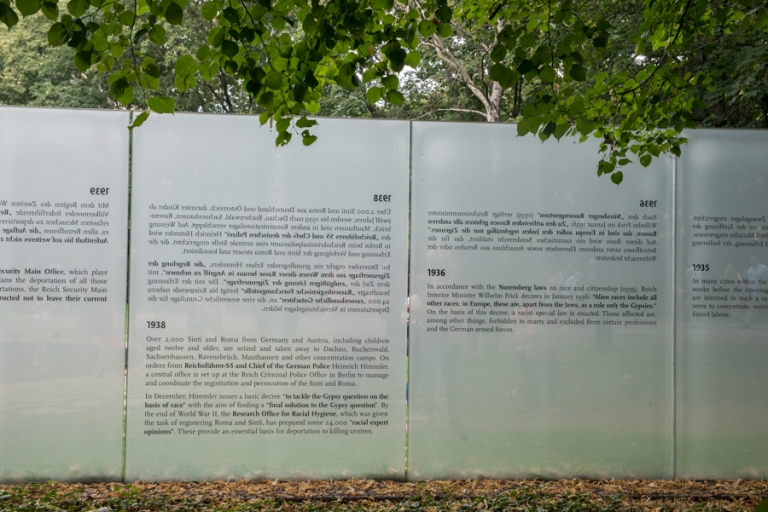 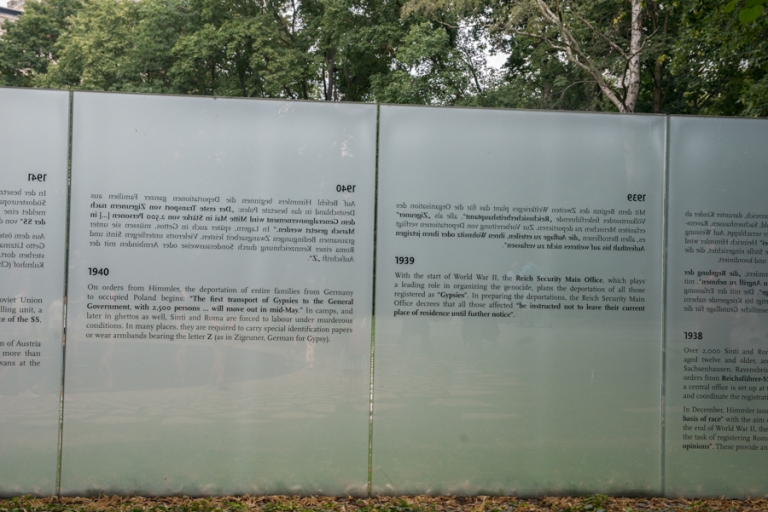 The etched glass walls around the Sinti Roma Memorial Berlin

The glass walls that are erected around the site detail the basic events leading up to WWII and those directly after.  It is estimated that 500,000 Roma & Sinti people were murdered. I find that number really staggering and my memory draws me back to a meme that I saw a little while ago on social media. It depicts men in the cell of a concentration camp and the words say

“Remember it didn’t start with Gas chambers. It started with politicians dividing the people with ‘us VS them’. It started with intolerance and hate speech and then people stopped caring and turned a blind eye”.

If you want to see the meme it’s here. 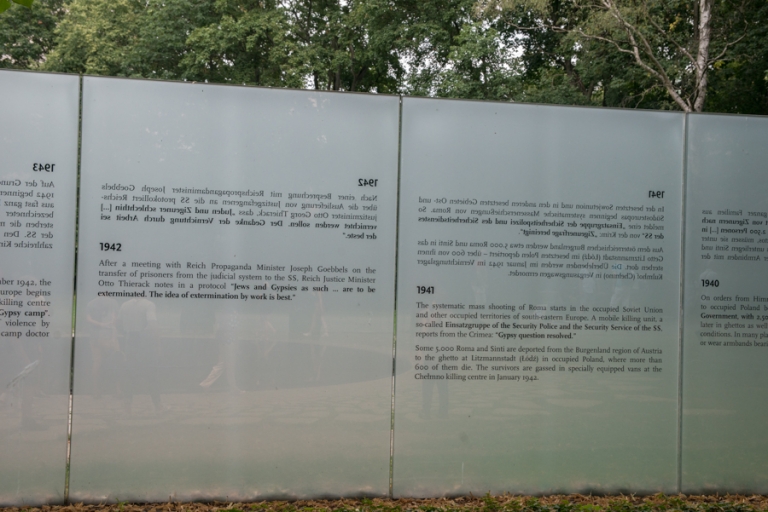 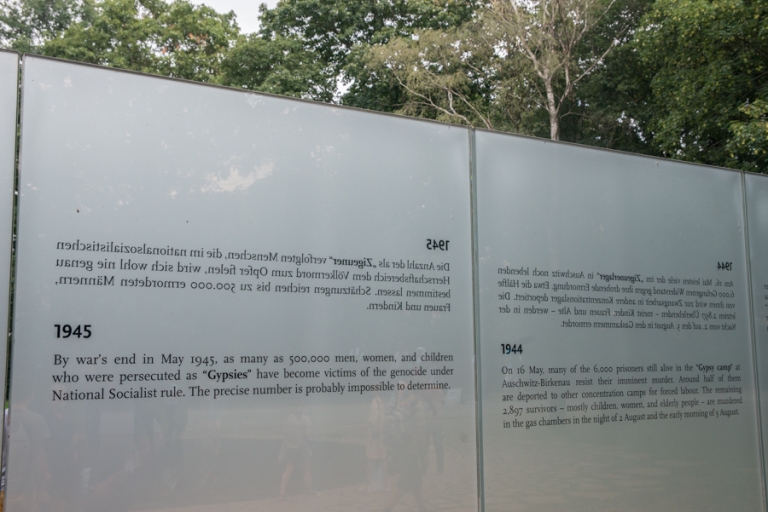 Place of the flower at Sinti Roma Memorial Berlin

A new flower is placed upon the memorial every day which I think is a really touching symbol to those that lost their lives. 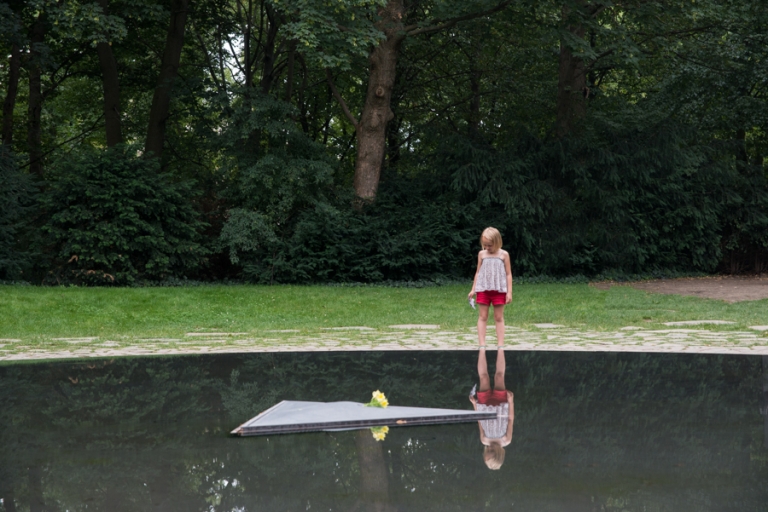 Trying to explain genocide to children who see no division

Our children have grown up in many different places with many different people. It would be fair to say that they do not see skin colour or race or gender as a means of division. Trying to explain genocide was so difficult because they just couldn’t comprehend why people were targeted on the above basis.

Although we re-countered stories of what had happened we chose to censor photos from our youngest two from WWII. We felt that at the age of 8 and 6, some of those photos would be too harrowing. An age appropriate understanding involves knowing that people were starved to death and gassed in chambers and seeing skeletal people in the camps was enough for them. I think it’s vital they understand the mistakes that were made in history and I so hope our future generations can live in a more harmonious and respectful way.

Take Your kids To See The Sinti Roma Memorial Berlin

I am convinced that if we all took our kids to see sites similar to or even the Sinti Roma Memorial Berlin that we would have fewer hate speech and crime incidents.

Nobody’s grandfather fought in the war for Brexit and there is a despicable irony that I now see Brits doing the Nazi salute to keep Britain for Britain.

Other Things To Do In Berlin With Kids

Spread the love
Posted in Germany
« Five things to do in Eidfjord, Norway
Visiting Currumbin Rocks On The Gold Coast With Kids »