What To Expect From Taking Kids To The DDR Museum, Berlin

At the husband’s request we visited the DDR museum in Berlin. He described it as a ‘touchy-feely, life experience, type of museum‘. Which it turns out is a pretty accurate description of it. If you’re visiting Berlin and looking for something to do with kids, definitely have a visit to the DDR museum where they can experience iron curtain lives by touching, doing and listening. 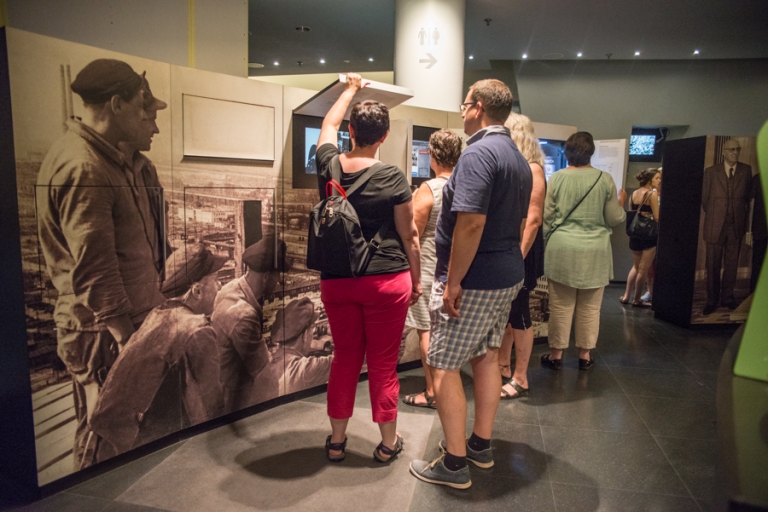 This really is a museum where you must touch everything.

Where Is It And How Much Does It Cost?

Tickets are available to buy online from €5.50-€12 as well as at the museum. We visited at the height of summer holidays and we had to queue about twenty minutes to get in. It might be worth buying the VIP tickets and skipping the queue.

Top Tip: For kids older than ten, the three-part series Deutschland 83  is a good prequel to visiting the museum. It depicts east German life in 1983, under communist rule.  If you haven’t seen it, I highly recommend it. 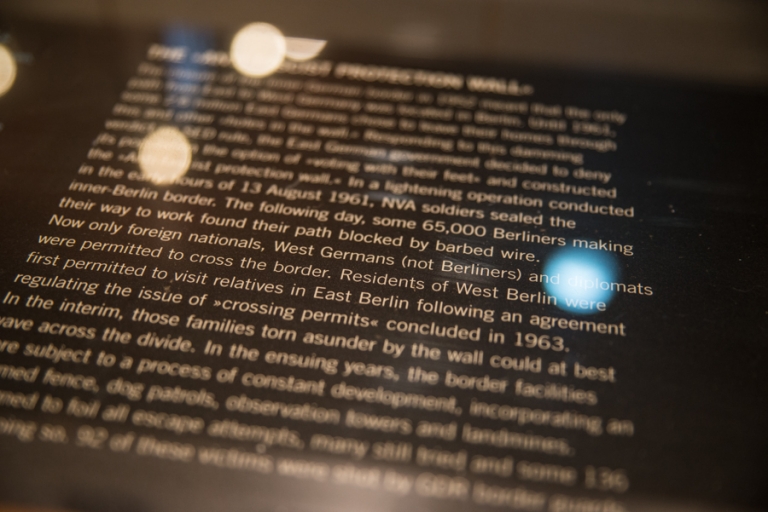 The DDR museum which gives an insight into life in communist east Germany.

Do You Remember The Wall Coming Down?

As a child I remember the wall coming down. I remember watching people climb on it and tear it down with their hands and knock it down with sledge-hammers. I remember it being a monumentally spectacular occasion and people around me being very happy.  But what I didn’t remember was why it was there in the first place. I knew it had something to do with communism (the iron curtain) but I was a bit confused as to why WWII and communism were interlinked. In case you are too, I shall try to explain it as quickly and as simply as possible.

This is a very simplified version of events and of course I have glossed over many of the other facts that happened, mostly for time’s sake but this is roughly what happened. 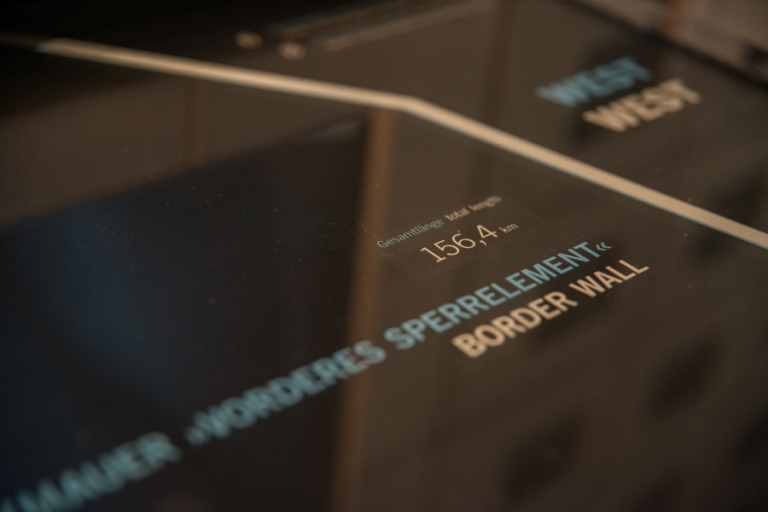 What To Expect From Visiting The DDR Museum

True to the husband’s word the DDR museum is hands on. It is a dynamic and informative introduction to experiencing what life was really like for the east Germans. The whole museum is full of 1980’s soviet artefacts and requires that you read and look as well as touch. You can pull out drawers, open closets, sit in a car, listen to music, pretend to be a spy, make phone calls, use a typewriter and watch films. It’s of no surprise that it has been nominated twice as the European Museum of the year.

You will learn how children were all toilet trained at the same time on a row of potties; how students were or weren’t able to go to school and how this inhibited their life choices; how people’s lives were controlled and how futile it was to vote. You are totally immersed into a world of communism and gain a considerable insight into what life must have been like. There was a lot to take in but it was in an interesting way. 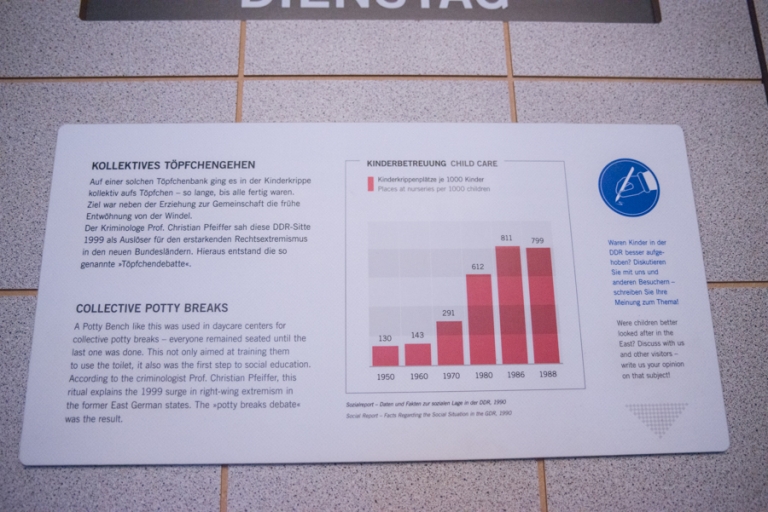 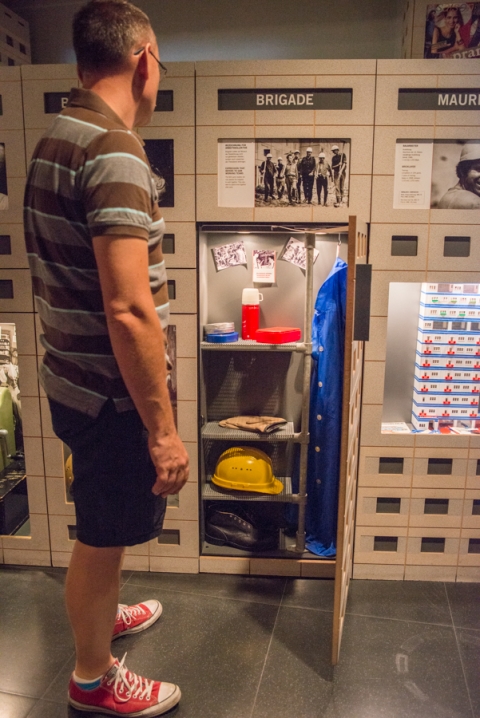 Open all the doors and see what it was like for workers in communist east Germany.

How Does It Make You Feel?

The museum is very dark with lots of effective spot lights. The ceilings are quite low which enhances feelings of powerlessness and oppression. At times the museum can be quite busy as well which exacerbates feelings of escapism (which for me were already quite high).

Although I found the museum fascinating, I had to take a break and go outside for 5 minutes.  It was an awful feeling of constant surveillance and control. I had to remind myself that it wasn’t real and these feelings were just temporary. It sounds ridiculous but I was fine after I’d had a break outside.

The Kid’s Favourite Part Of The DDR Museum

A Trabant, the most common vehicle in the former East Germany Photograph is on display in the museum. You can attempt to drive it down a street and turn left with use of a projection screened onto the windscreen – which is almost impossible and then if you haven’t crashed, it’ll run out of petrol. 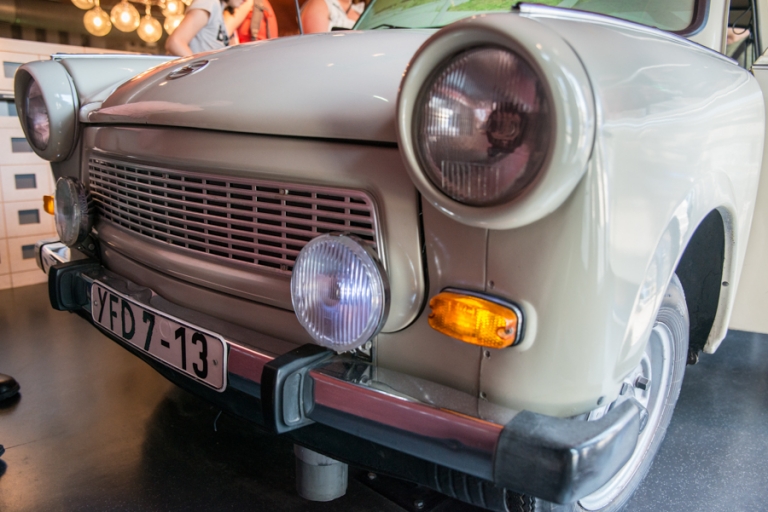 The car which you can drive. 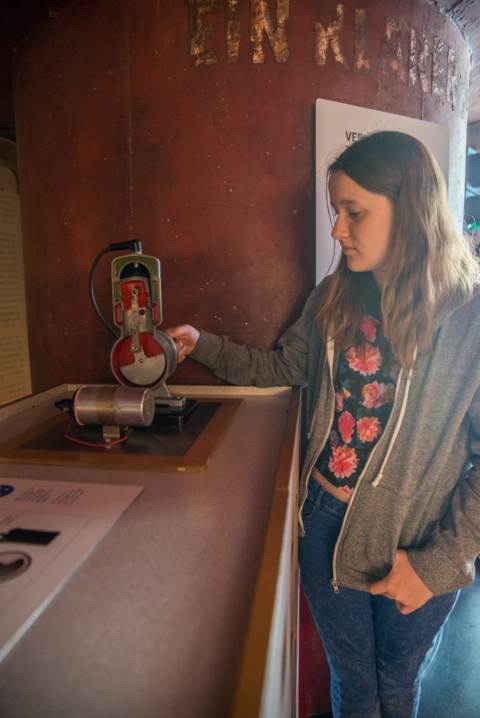 Learning how the engine worked 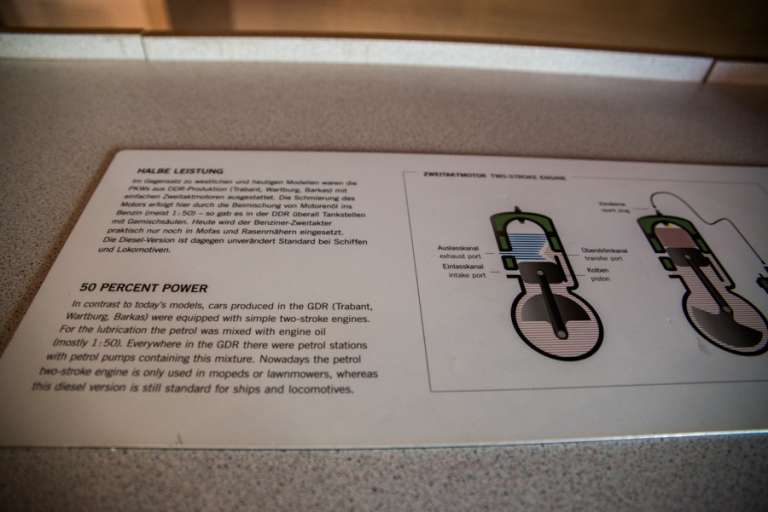 Easy to read explanations of how the motor worked 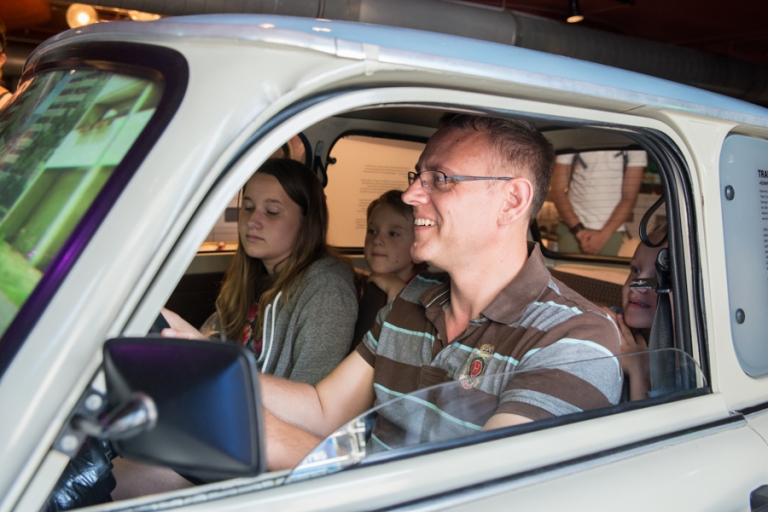 Attempting to drive it 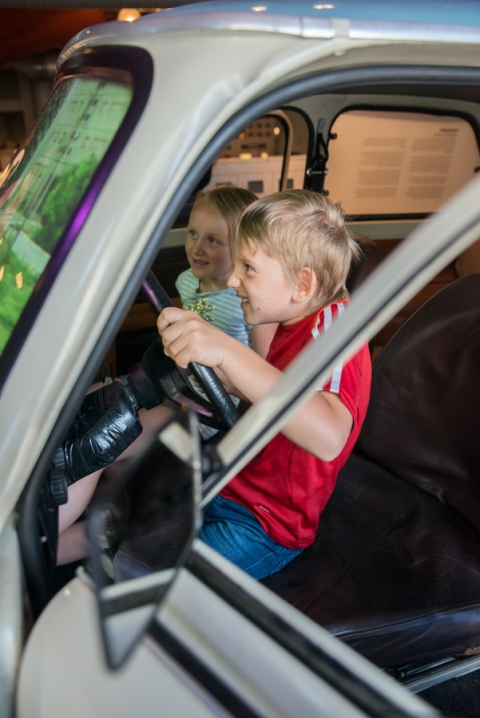 He had about twenty goes!!!!

Surveillance During The Iron Curtain

Spying and being surveyed were large parts of life under communist regime. The museum has a small booth set up with hand written, spy notes and headphones listening to the lives of others. 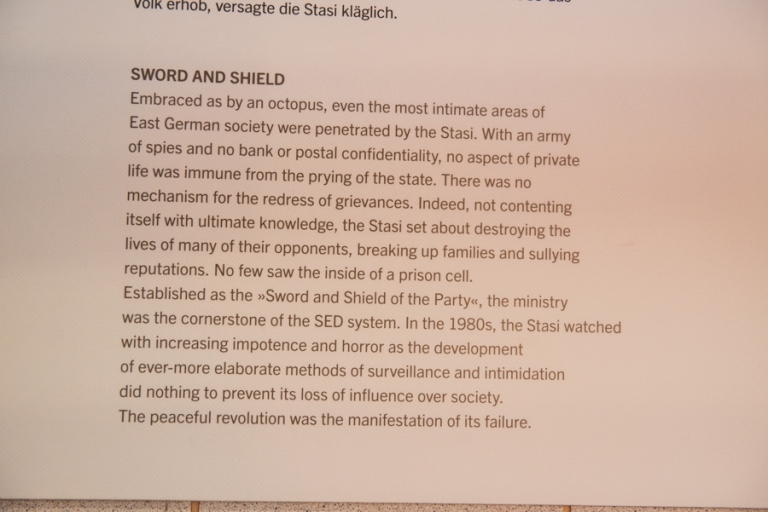 Information plaques are everywhere in the DDR museum. 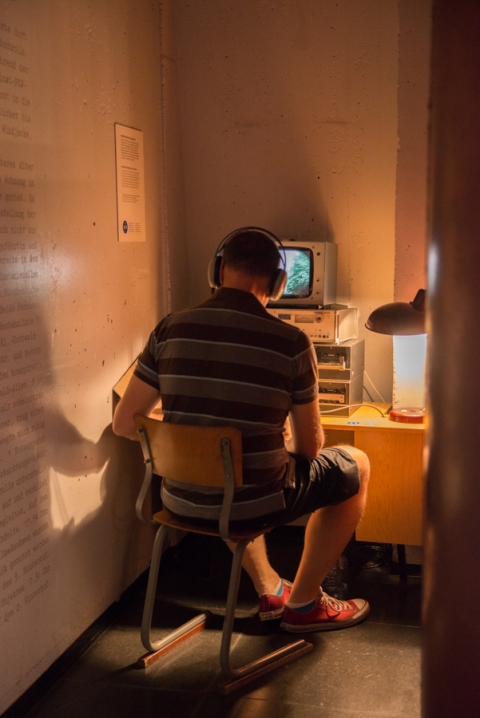 Learning how to spy 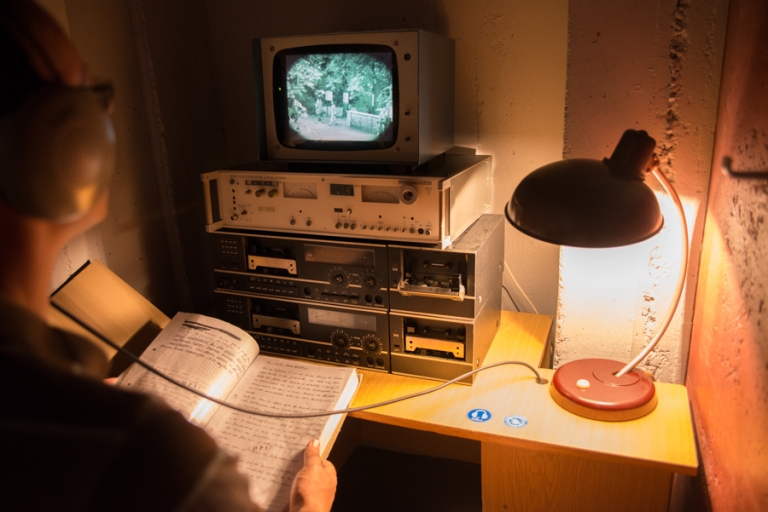 Family life was an important aspect of living in east Germany. It was one of the ways to exist with a degree of happiness and normality.   In some cases I found the information signs to be mocking of east German lives and I think it’s important that we don’t. People had to live like this or face death or extradition to the west.

Normalising a very difficult situation is a beneficial coping strategy and we shouldn’t take away from east Germans that this was their life but that there were elements that were fun and happy. 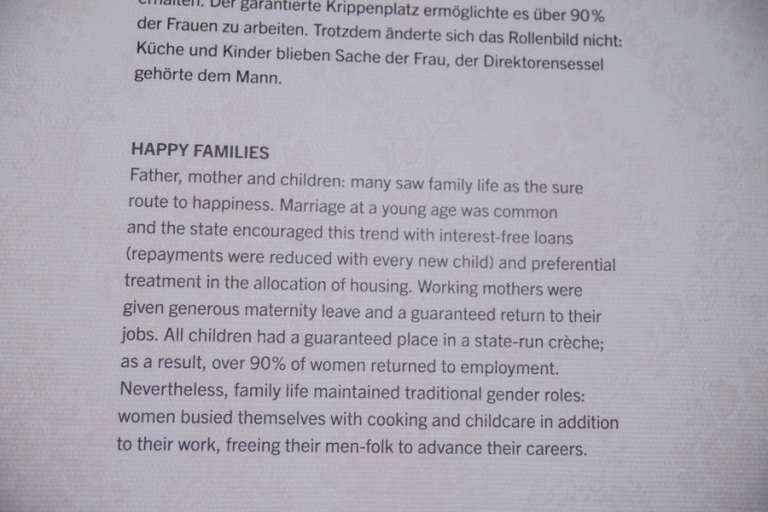 As explained the eastern Germans never went without jobs or money but there was little in the way of ‘things’ to buy. As a result they became immensely resourceful. In the face of adversity they learnt to create their own wallpaper!! I guess in a land where everything is supposed to be the same, a touch of personal kept you sane. 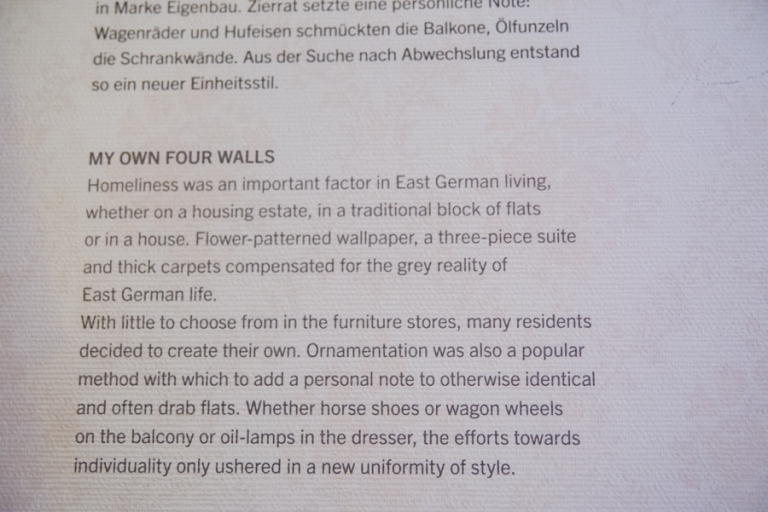 Explanation of life in east Germany 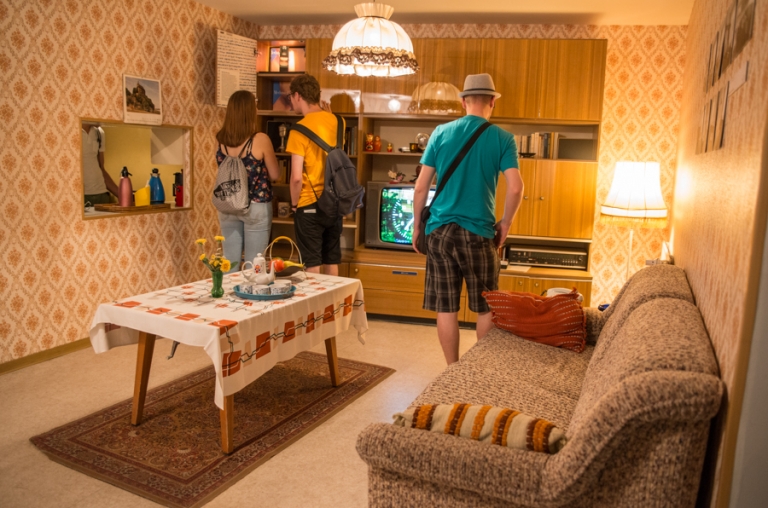 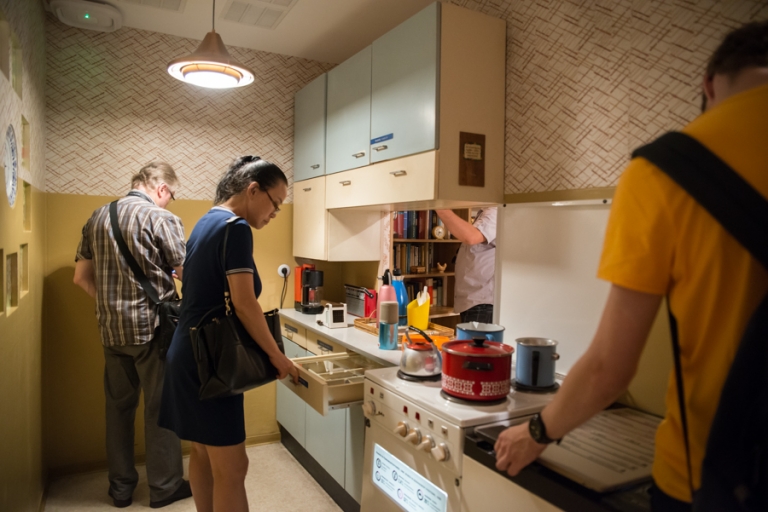 Why Is Everything Brown & Orange?

A big chunk of my early memory is brown and orange! I’m sure those are not my only memories of the 80’s but brown and orange featured strongly in clothes, curtains, carpets and any decor.  Here is no different. Step back in time and see how old-fashioned it all now looks. 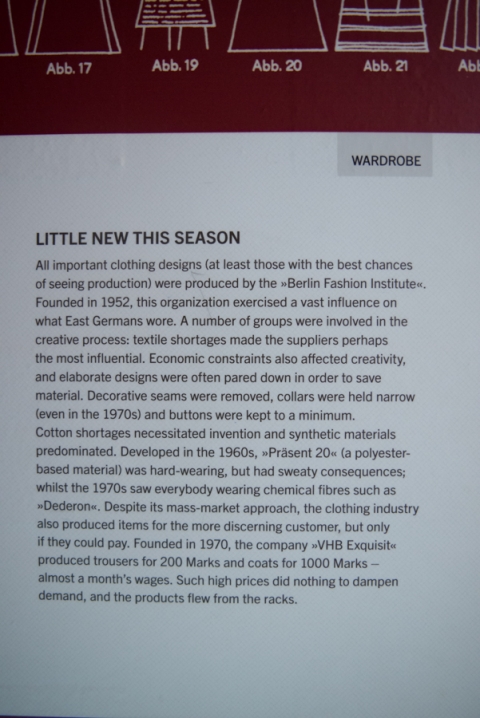 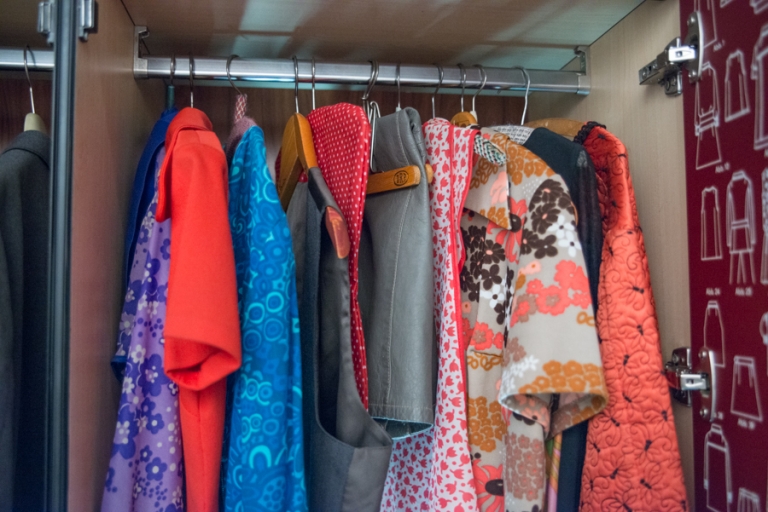 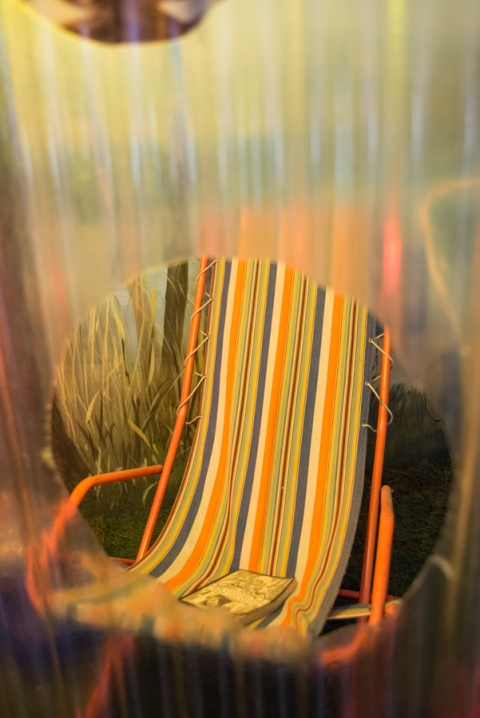 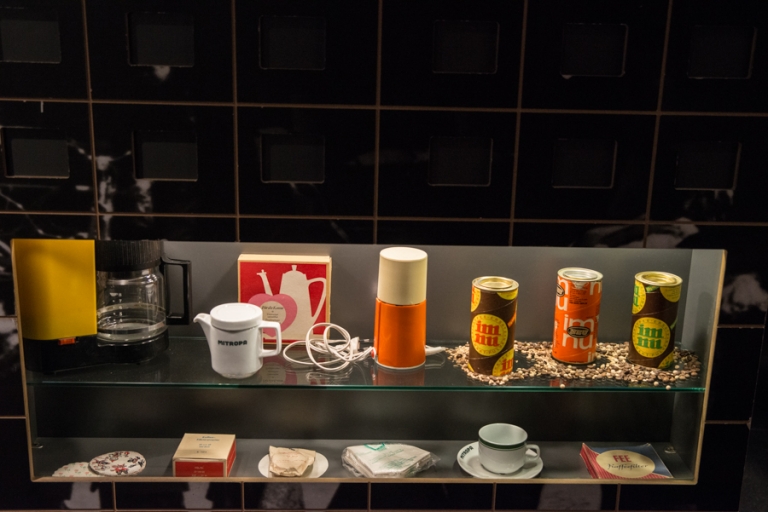 The photos below show what life was like during communism as people tried to make it less of a challenge. These photos detail life’s little essentials that carried on despite. 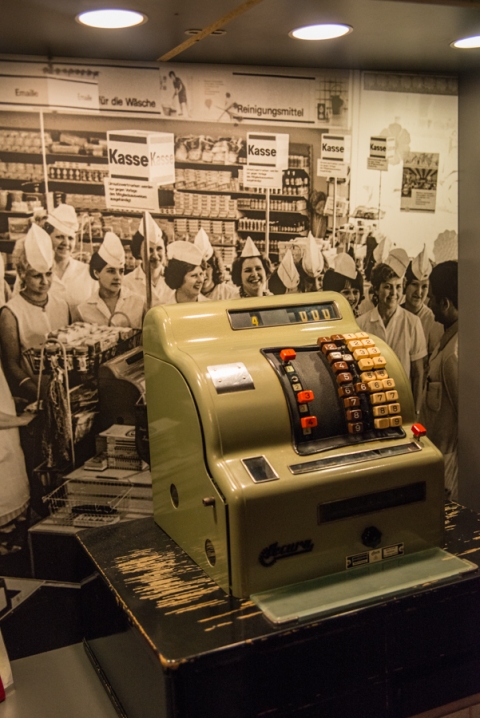 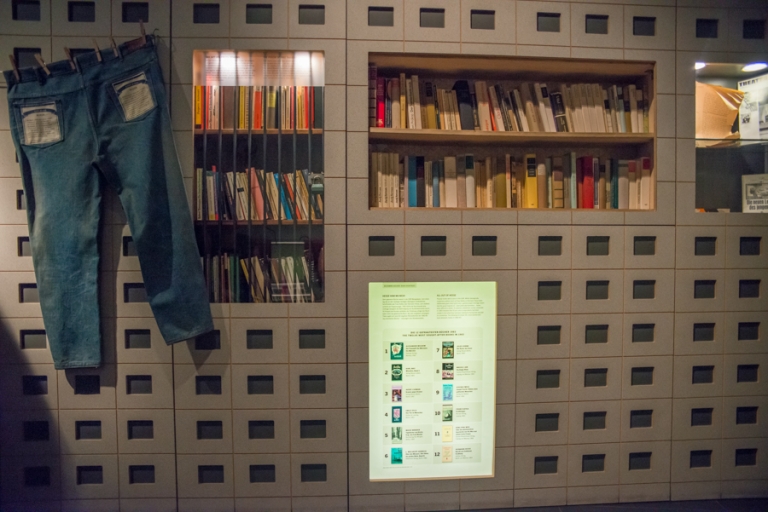 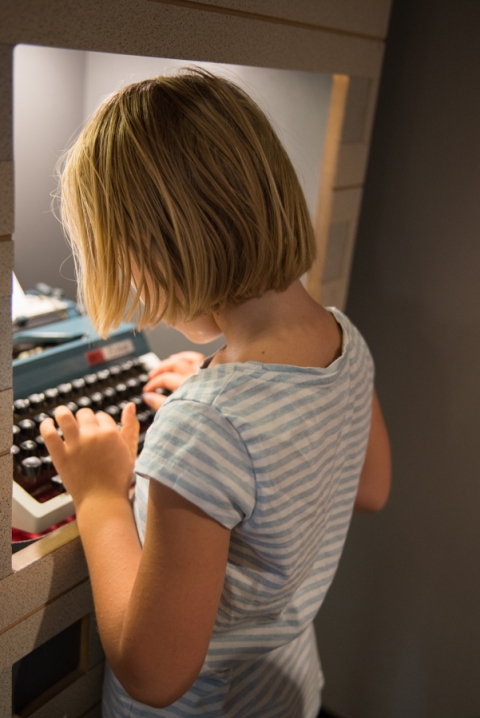 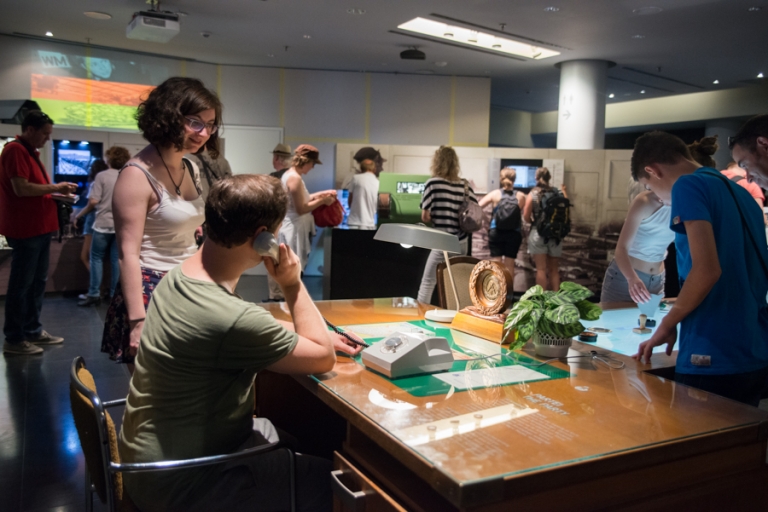 hands on fun at the DDR

Should You Take Kids To The DDR Museum?

I really recommend visiting the museum, especially with kids. There are still a large number of countries in this world that are communist run.  Spending time in the museum gave me a much better understanding of what it must have been like for Eastern Germans but also an inkling into what it must be like NOW for many.

If you’re in any doubt as to why some people want to flee their countries (aside from the war, famine, terror and inability to work) this will make you more empathetic to their plight.

Where Could You Stay In Berlin?

Use this interactive map to check out hotel and self-catering properties in Berlin.


Other Tours & Activities in Berlin

Where Else In The World Could You Go?

Whilst you’re here why don’t you check out some of our more recent posts.

Spread the love
1
Share
1
Share
Posted in Germany
« OMG! We lived in a Tepee for 3 weeks. Slovakia
Climbing the UFO Tower Bratislava With Kids »