How to spend half a day at Tempio Di Antas. Sardinia. 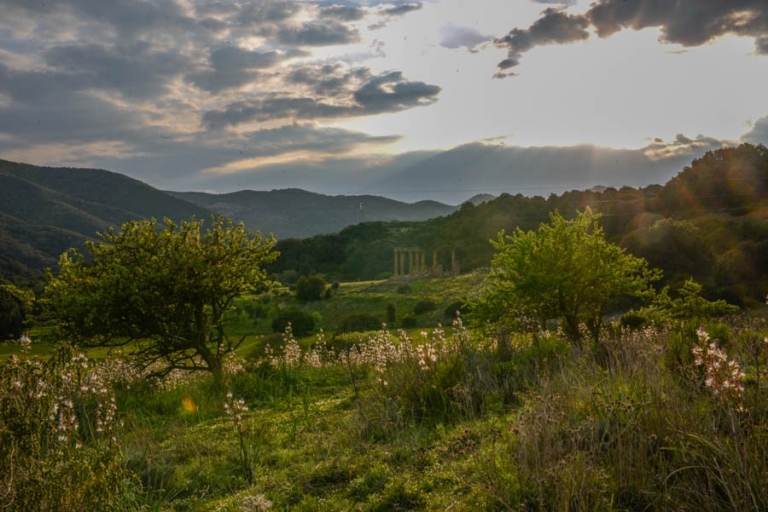 How to spend half a day enjoying the sights of Tempio Di Antas?

Arrive at about 10am, leisurely consider the map, plan the areas you’ll visit, take a nice walk to some of the other Roman areas close by, have a picnic lunch and relax in the sunshine.

How not to spend half a day at Antas?

Get up late, stop for a two hour lunch en route, make numerous detours for photos and  then arrive twenty minutes before closing time!!

I’m sure you can guess which category we fell into. 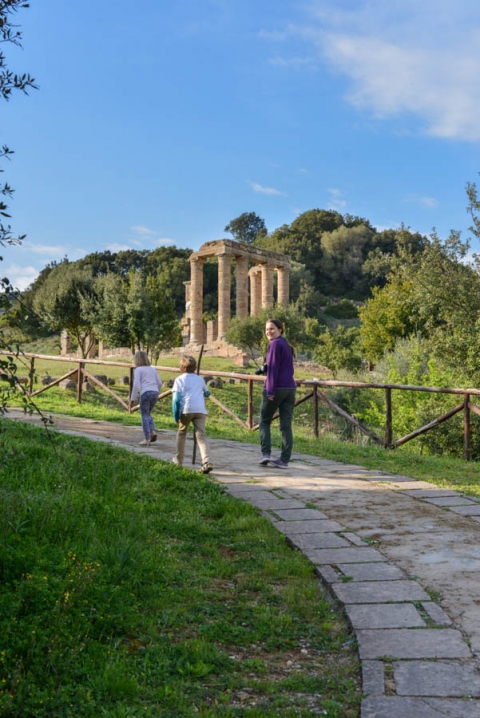 Rushing up to Tempio di Antas

Located in the middle of the countryside Tempio di Antas oozes peace and tranquility. You can hear the sheep’s bells in the distance, the sound of crickets and the slight wind rustling the trees. It has a very relaxed feel and we were the ONLY people there.

With the sun beating down on our full bellies, we tried not to amble along enjoying the sites but it was hard. Antas is a lovely place to be; it’s so green and full of flowers, trees and animals, it’s very hard NOT to relax and take your time.

But rush we did. 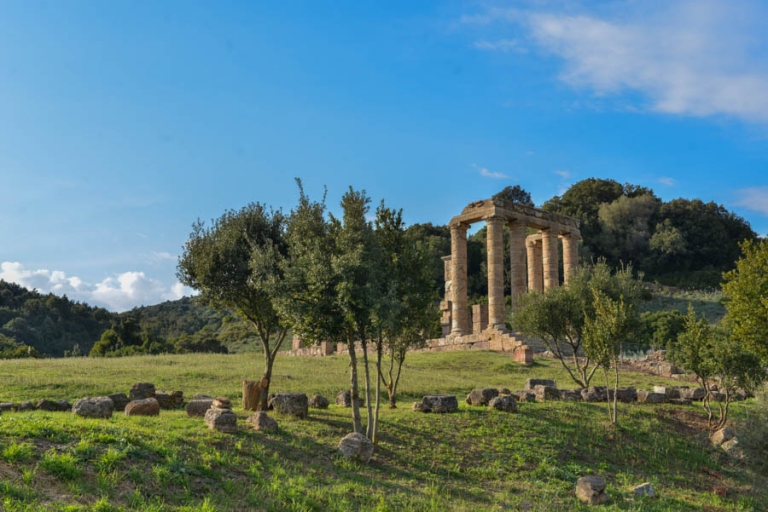 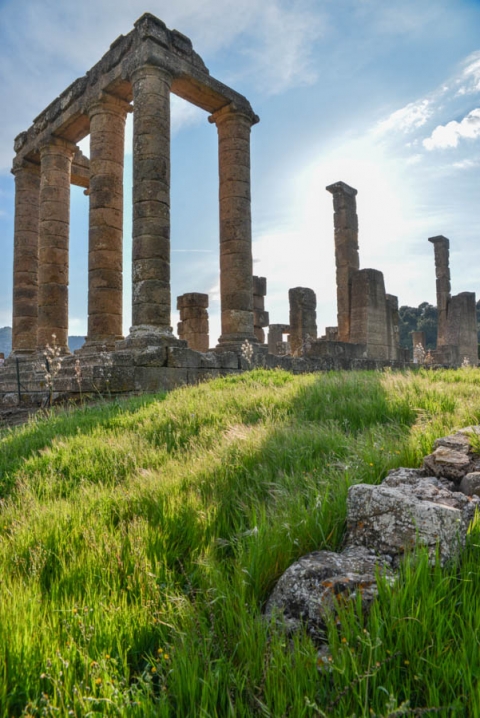 The temple is located in an area colonised first by the Carthaginians and then by the Romans, attracted by its iron and lead deposits.

The site consists of a Roman temple, under whose steps are the remains of the Carthaginian Temple. The original temple was built around 500 BC over a sacred limestone outcrop, and restored in 300 BC. The Roman temple was built by emperor Augustus (27 BC – 14 AD) and restored under Caracalla (213-217 AD). Its remains were discovered in 1836 by general Alberto La Marmora and rebuilt to the current status in 1967. 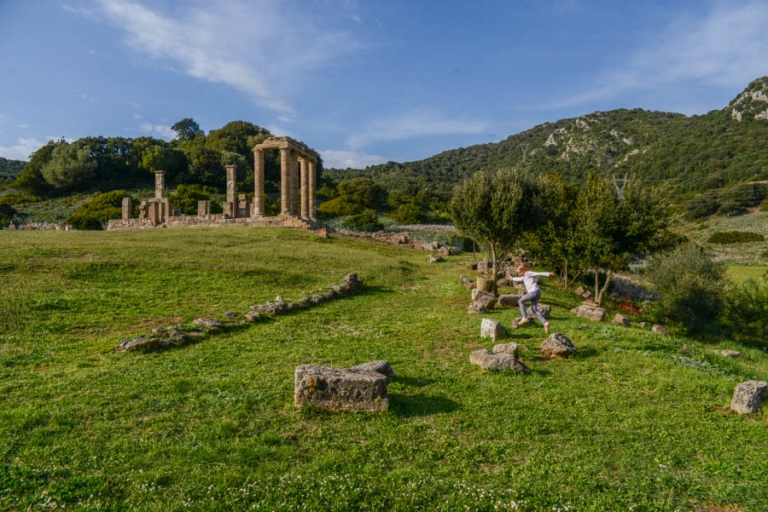 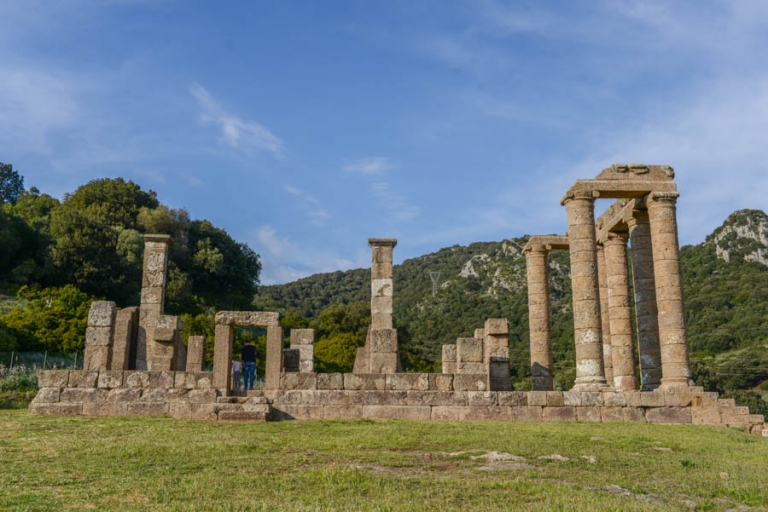 Antas includes six columns, 8 metres high, with Ionic capitals. Originally it is thought that a triangular pediment was also present. The cella (front hall) was accessed through two side openings and had a mosaic-covered pavement, part of which has been preserved. 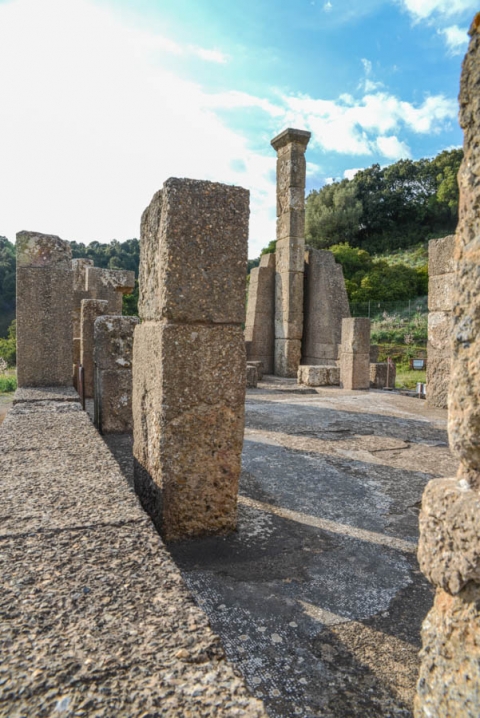 Mosaics in the Cella 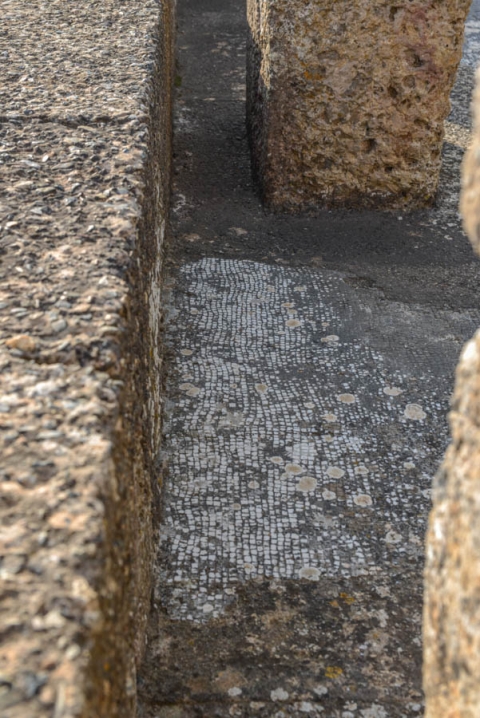 Walking around the temple

I was amazed that we were actually allowed to walk on the majority of the ruins. There was a small section of the mosaics that were cornered off but the rest we could climb, sit and explore.

It makes SUCH a difference to a visit when we’re allowed to touch and get hands on – especially with the kids. 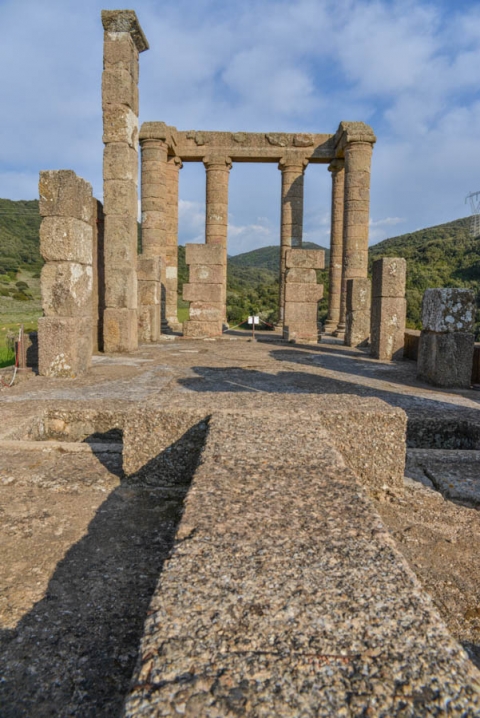 Walking on the remains 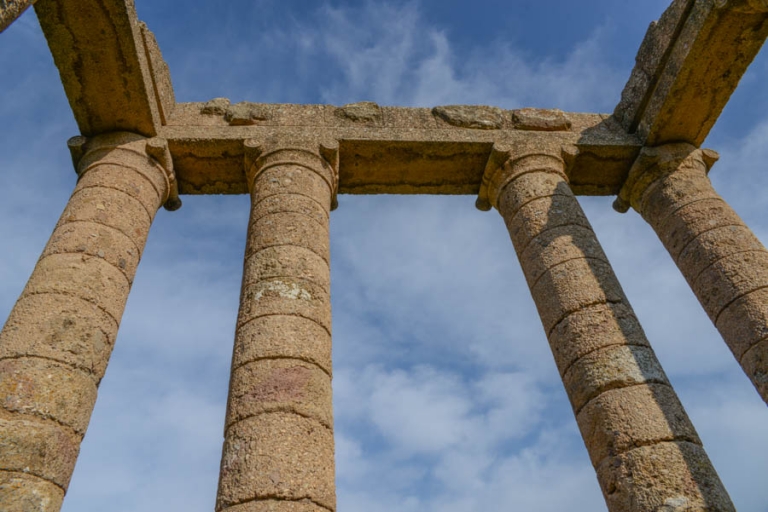 The temple of Antas 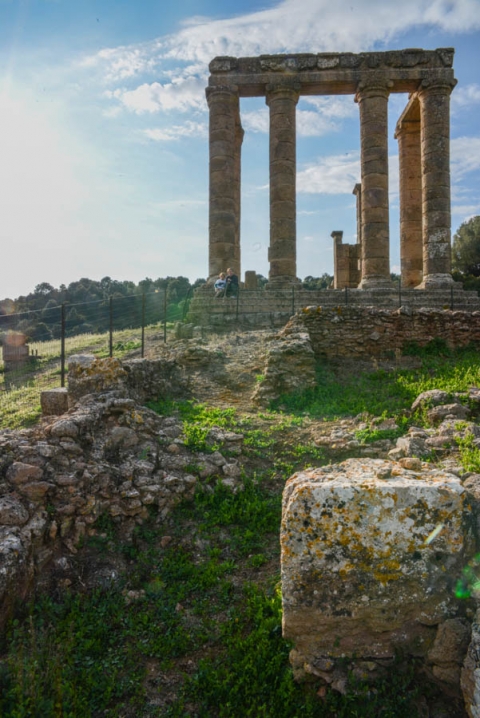 Sitting on the Roman stones

I was really mesmerised by the natural beauty of the area as well as the historical element and whilst Richard blamed it on the quantity of wine we’d consumed at lunch, I really thought the temple was a bit magical.

I took a lot of photos! 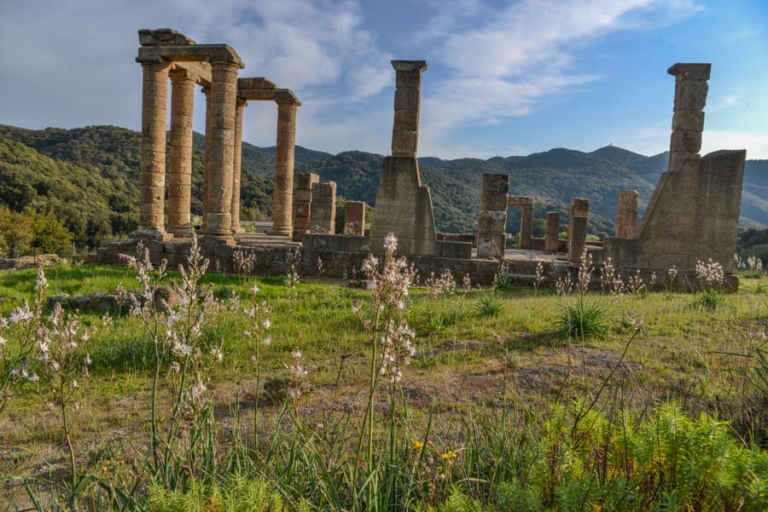 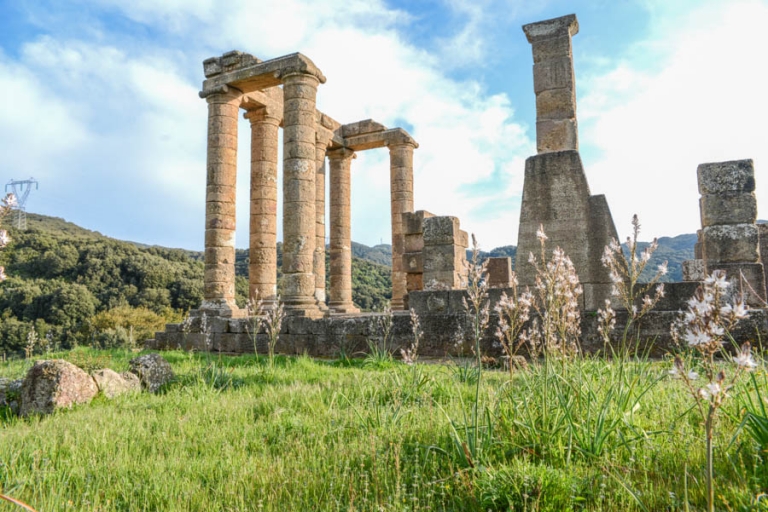 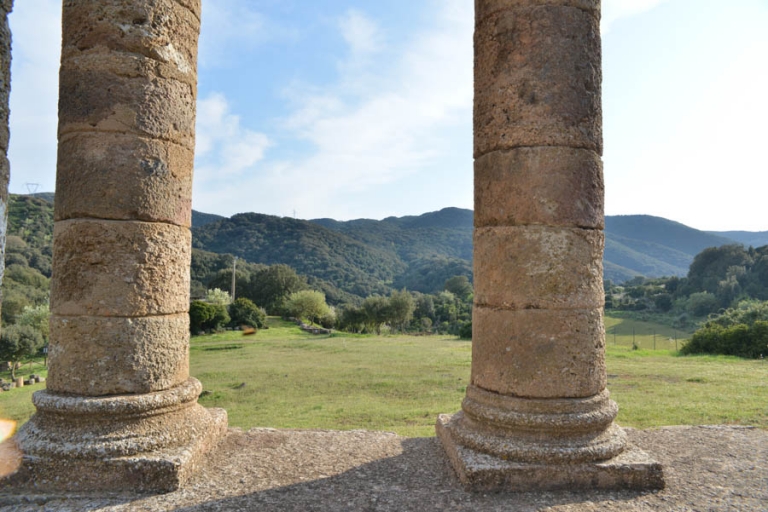 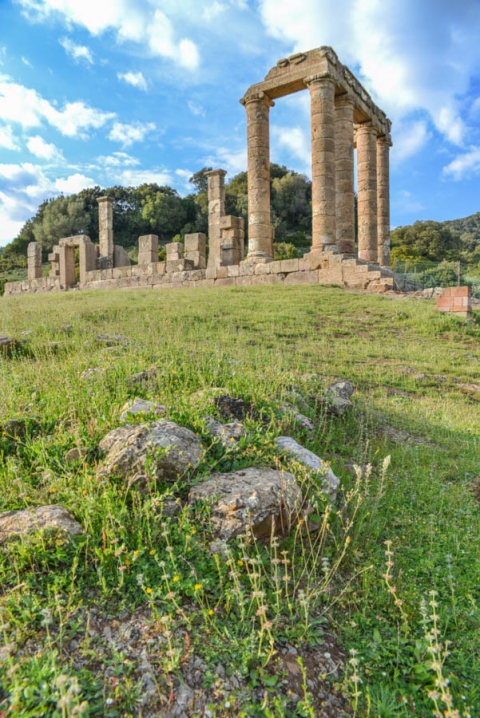 The surrounding area also contains a number of sites worthy of interest. I can’t say they’re worthy of visiting because we didn’t make it to them in time for closing. 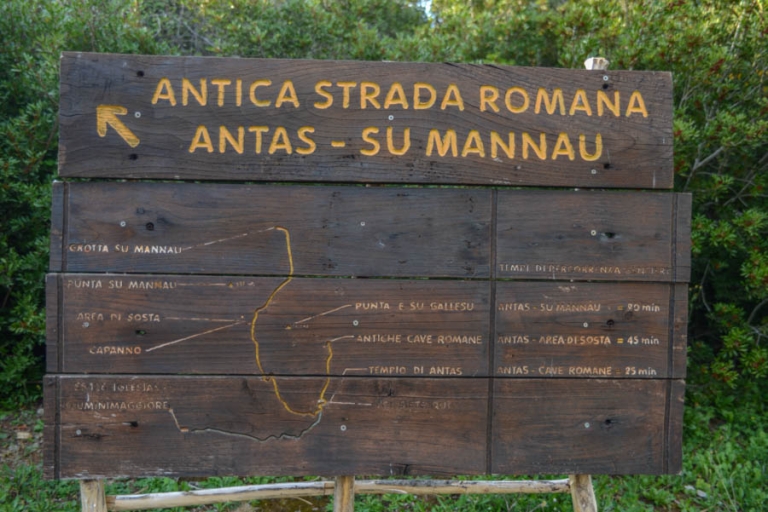 Some of the walks around Antas

We didn’t get a chance to do these walks and we all agreed that we’d like to go back to Antas to explore further another time. 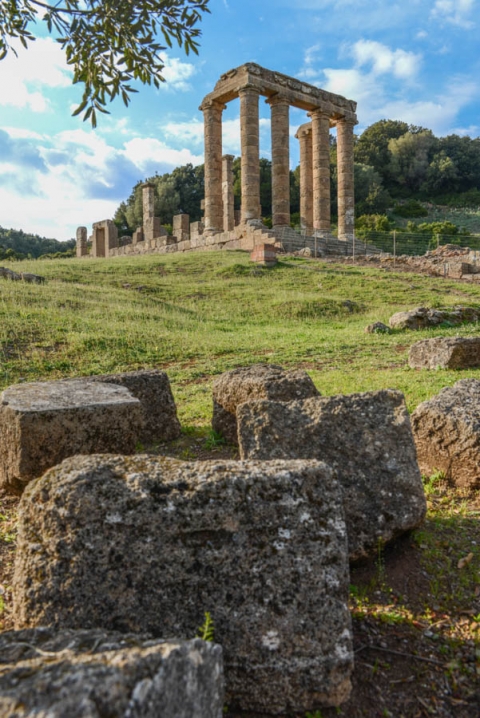 Around 20 meters north-south from the Roman podium, around a rocky composition, probably with religious functions, is the nuragic necropolis consisting of tombs of 80 centimeters in diameter and with a depth between 35 and 68 centimeters, probably To a larger necropolis dating from the early age of iron . 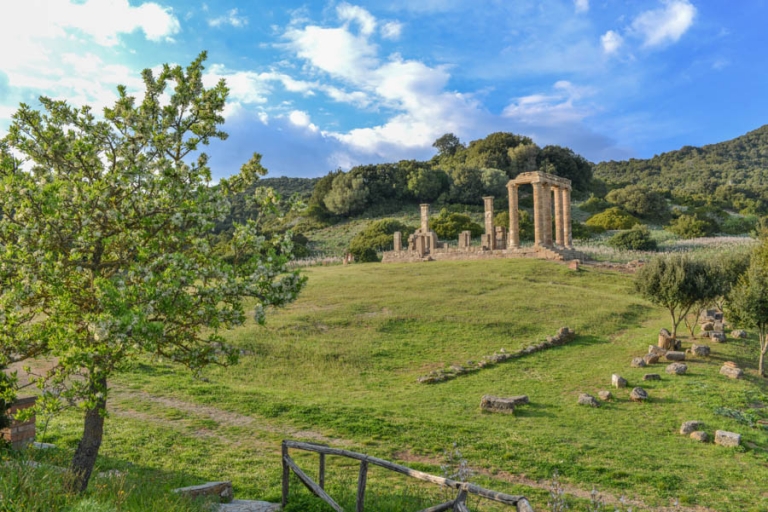 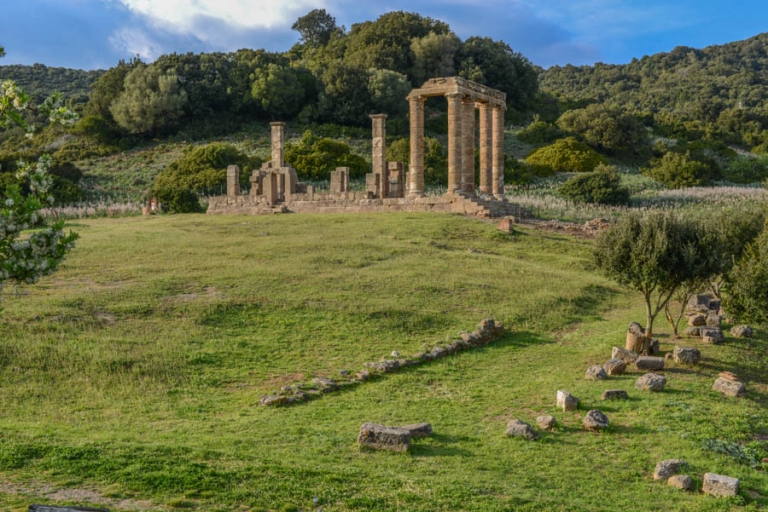 Located about 200 meters southwest of the Antas temple, there are the remains of a small village dating back to 1200 BC.  The buildings are composed of circular environments built with small stones cemented with ground mortar. The same village was once again inhabited in the late Romanesque age. 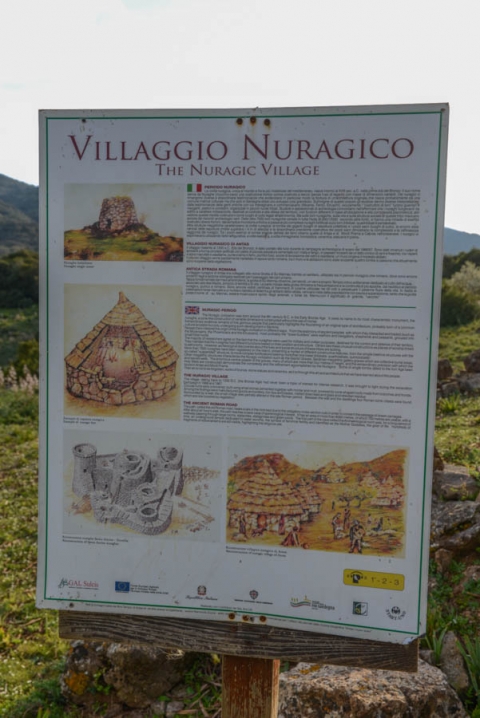 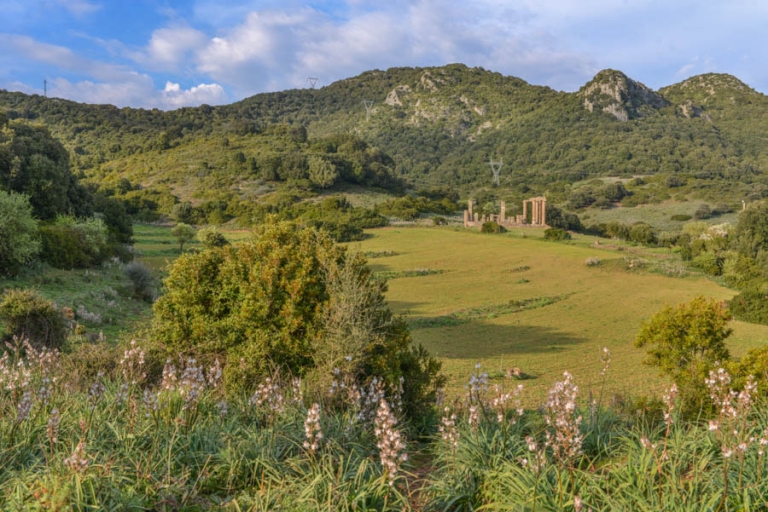 Walking around the village

Again, like the Temple, people are encouraged to visit and touch the ancient village and we were able to stand in the buildings.

About the size of Yurts, the buildings mostly comprise of walls, but give a good indication of size.   This is all we were able to see because the site closed so we left… with a plan!! 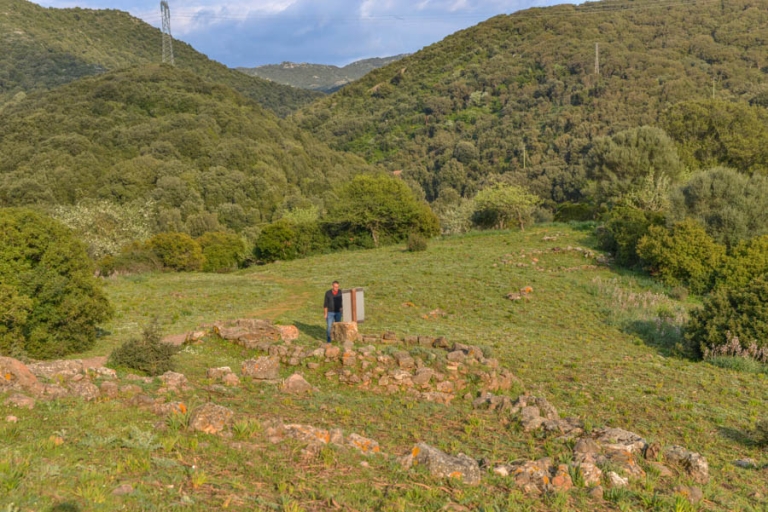 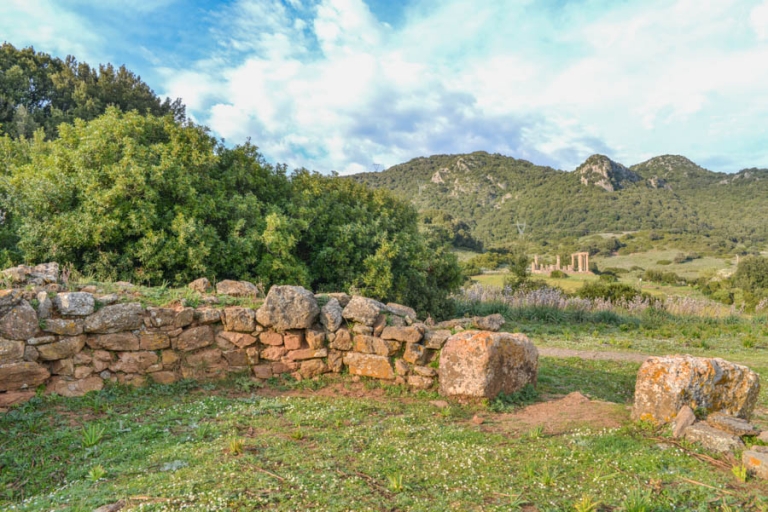 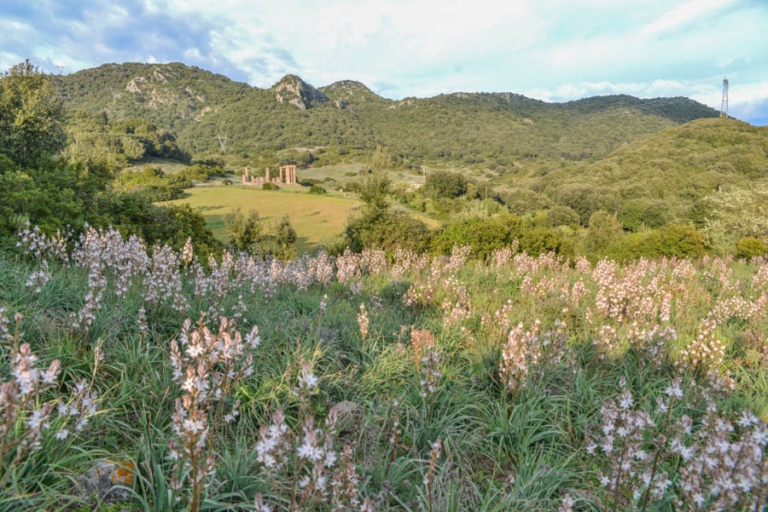 Whilst we were walking on the temple, I had seen a local field with footpath access and decided that we should go and find it in the car. Of course my poor suffering husband, Rich, who I had instructed to drive, is giving me that

‘Oh no, does it involve dirt tracks’ look

YUP! My grandiose plan involved a dirt track road enabling us to watch the sun set overlooking the temple. 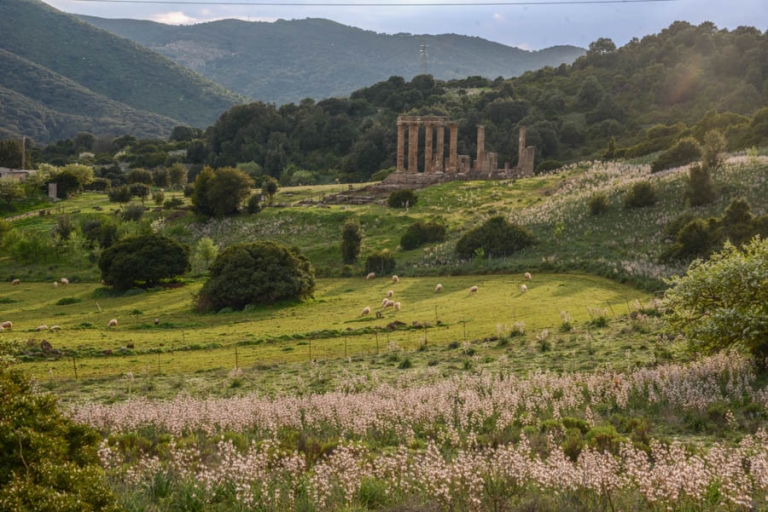 The view over Antas from the neighbouring field

The last thing I was expecting to find was a dung beetle. In Italy?! I didn’t even know they existed outside Africa. We spent ages watching this little fella mount his back legs over the sphere of dung and march it 20cm up the road. 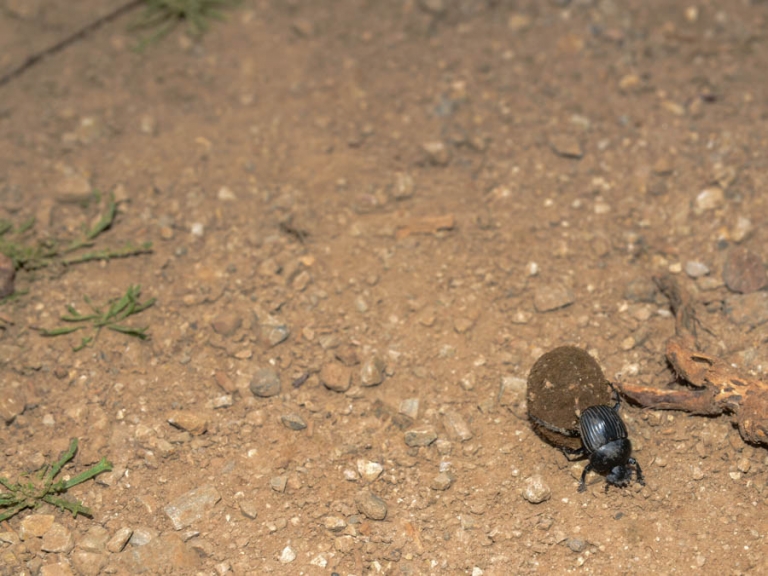 Waiting for the sunset

We stayed for a while waiting for the sunset but then had to leave a little while before. We had a two hour journey back down to Pula and a dirt track to negotiate 🙂 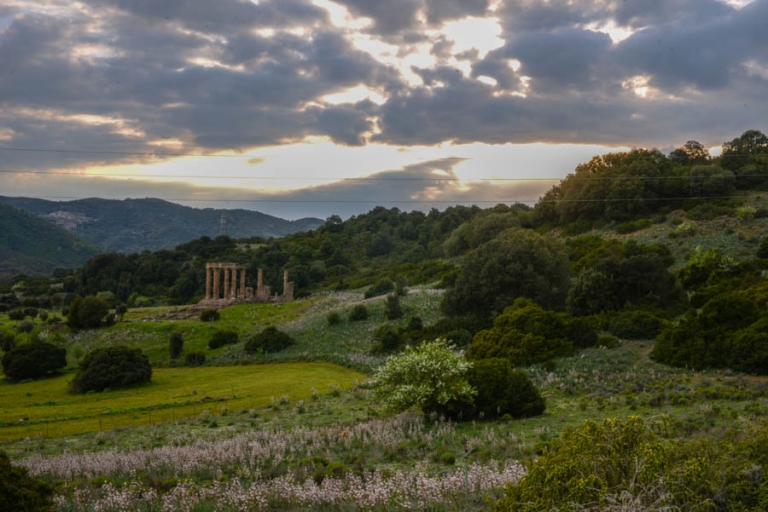 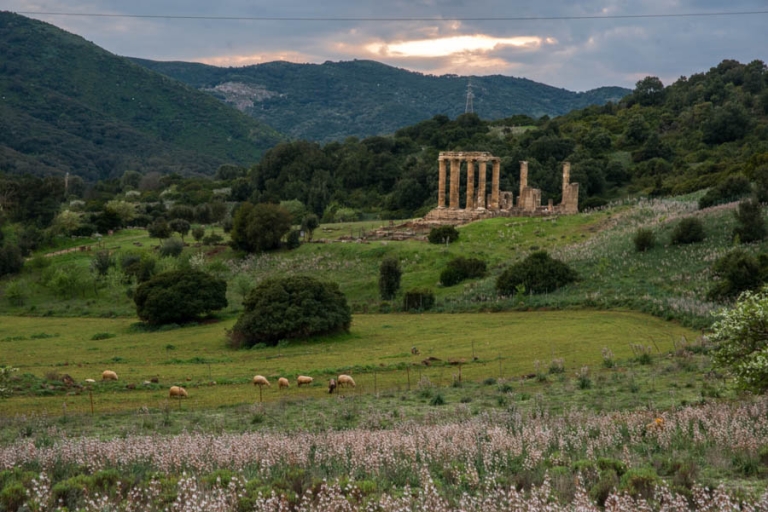