I am foolishly trying to blog about Tharros six weeks after we visited and whilst it is no longer fresh in my mind and when I’ve left all of the pamphlets and receipts in storage in London! Silly me. Let’s hope the photos and Google can trigger my memory. 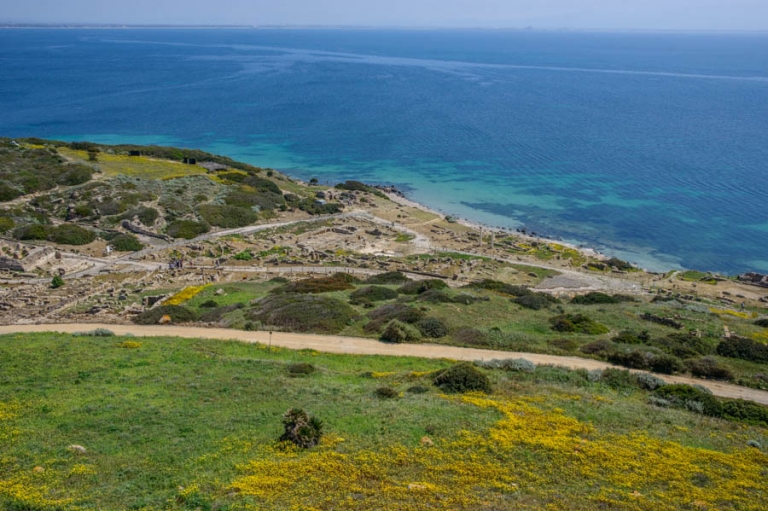 Tharros from the Spanish Tower

The History of Tharros

Tharros is an archaeological site located on the southern shore of the Sinis peninsula.   Historically, Tharros seems to have been one of the most important places on the island with the site dating back to the Bronze Age.

Excavations show that the site was inhabited by the Phoenicians, the Punics and the Romans. The town seems to have been abandonned and was then used for centuries as a quarry. 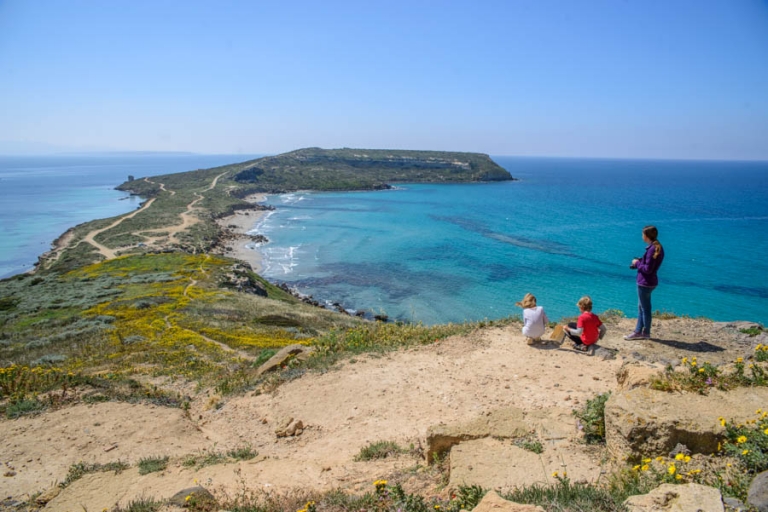 The view from the Spanish tower over the bay

The remains of the town include foundations of temples, roman baths, a roman Castellum Acquae, a phoenician-punic tophet and a artisan quarter. The newer built Spanish tower of San Giovanni, the beach of San Giovanni, a museum and plenty of restaurants and cafes are also on site as well as the church of San Giovani at the entrance to the site. 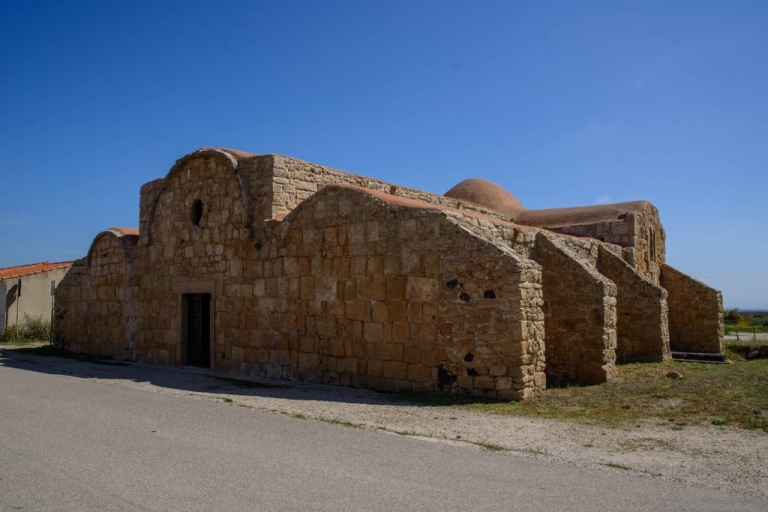 The church of San Gionvani

Opening times change throughout the year and there are a choice of entrance fees.  We opted for a triple ticket enabling access to Tharros, the Tower and the museum (although we never found the museum). We paid €9 for adults and €5 for the kids.

We decided to get the most out of our money and spend most of the day there. We arrived at about 11am and left at 5pm, eating on site and having a splash on the beach too.

Eating out there was relatively expensive and not particularly enjoyable, if I were to go again I would definitely take a picnic, a blanket and some towels. 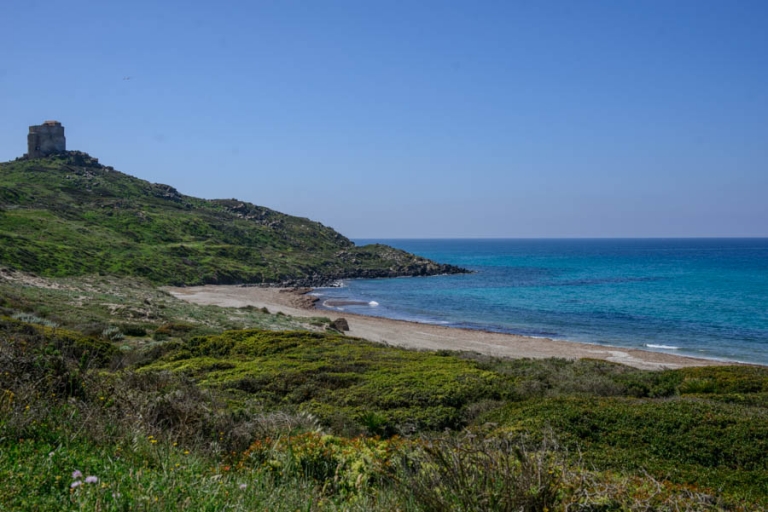 The Spanish Tower of San Giovani

Between the sixteenth and seventeenth century, Spain built the tower of San Giovanni as part of a coastal defense system against pirate raids from North Africa.

The 15m tower of San Giovanni, so named for being close to the church of San Giovanni di Sinis, was built on top of the hill, 50m above sea level. It was armed with cannons and spingardes, manned by a garrison, an artilleryman and four soldiers. It is thought that the tower was built on the ruins of a nuraghe and a Punic tower with stones reused from the city of Tharros.

The tower is closed for the lunch period and we managed to get there just in time to make it up onto the top terrace, where the view is spectacular.  The tower gives a 180 degree viewpoint and is very worth the climb. 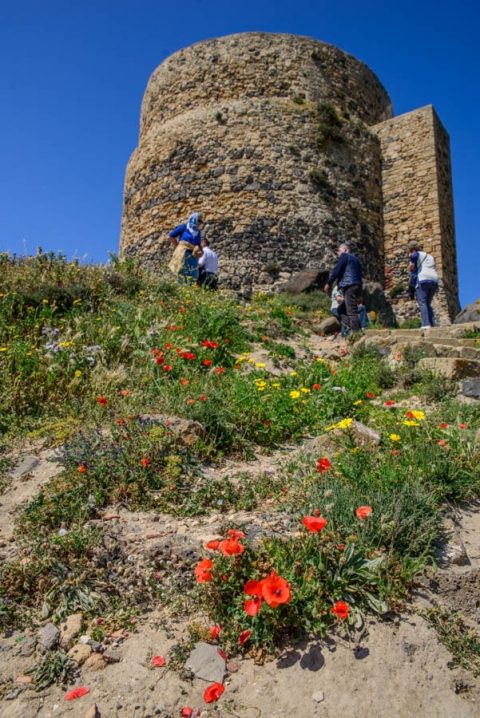 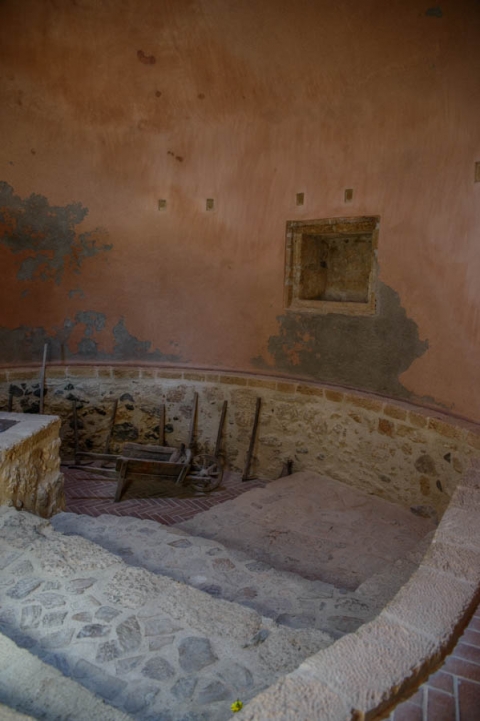 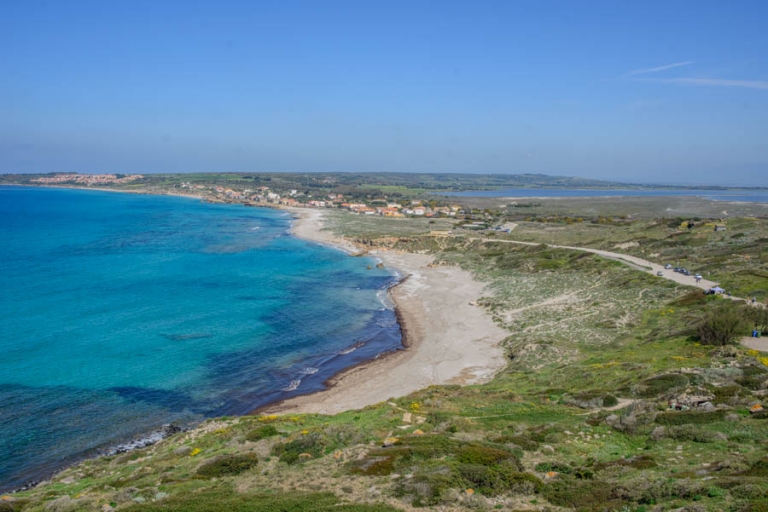 The view north from the tower 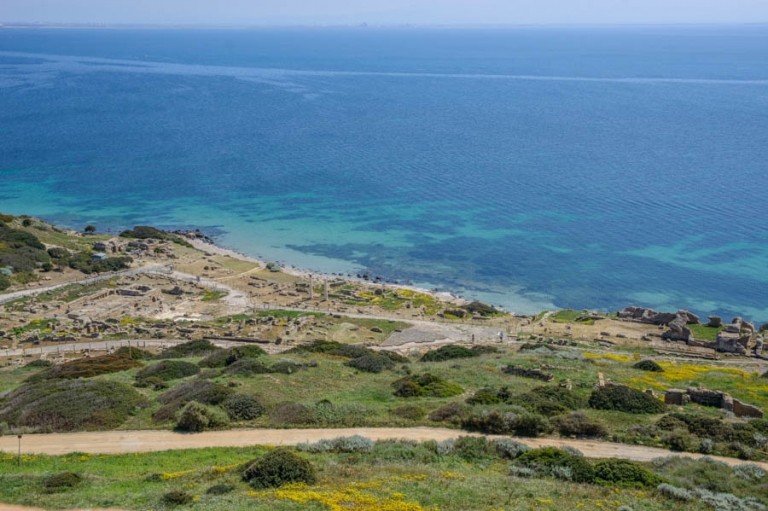 The view south from the tower down onto the site of Tharros.

Finding the way around

Upon entrance to Tharros we were given a detailed map and followed the numbered signs around the site. The kids chose to map read and it was easy to follow around the site. It kept them really interested and motivated to see what was left of the roman remains.

The site isn’t huge but there are some hills. A bottle of water is a necessity. 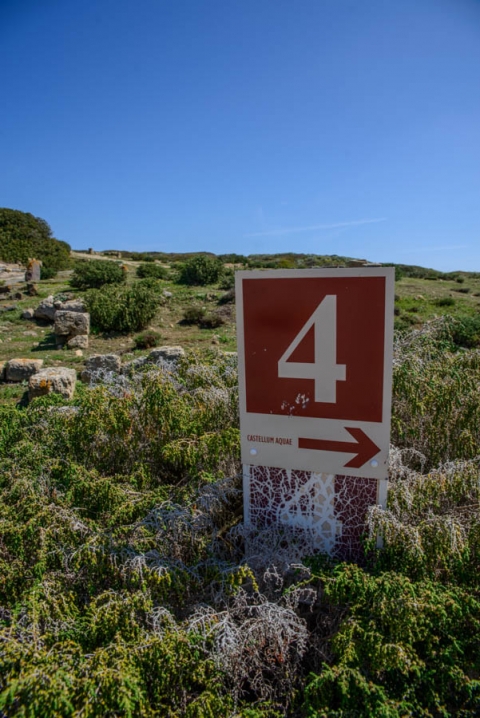 We entered the site and walked down the main road towards the sea where the fake columns are (yes I am still bitter about that!) and two temples. 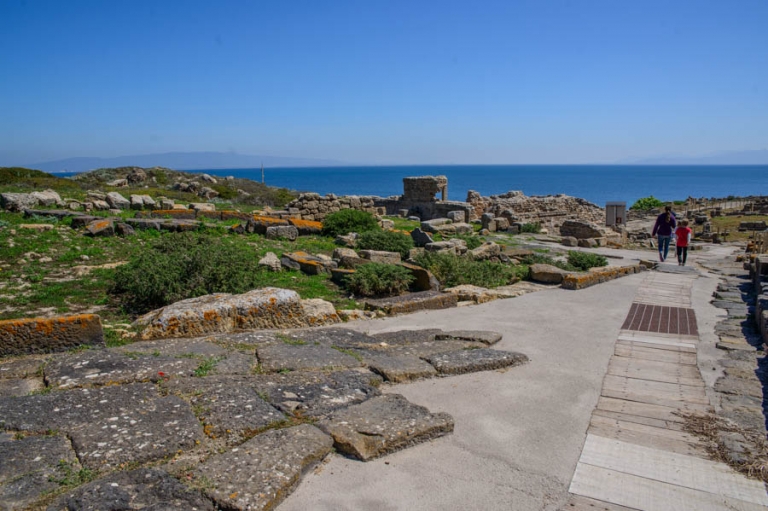 There are a a number of reservoirs around the city. This one is built from stone, lime and sand with a brick exterior. It acts as a tank and water collector for the city and is characterised as a water tank by its lack of doors and windows.

It originally had a number of columns (possibly six) to keep the roof up. 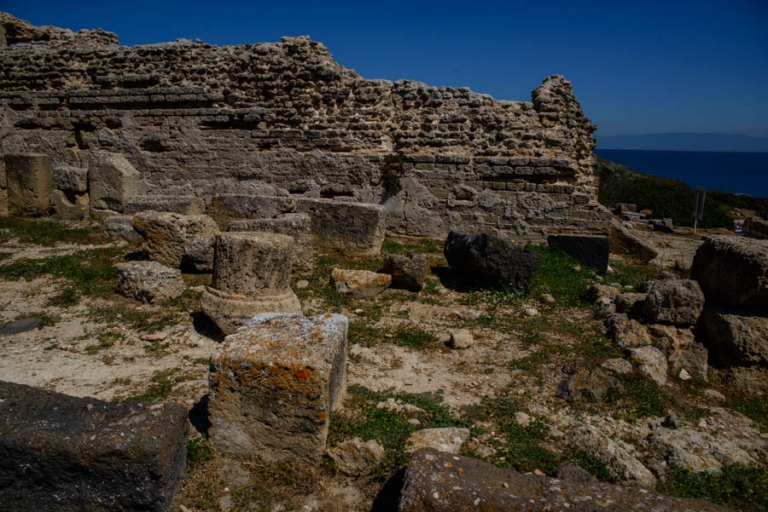 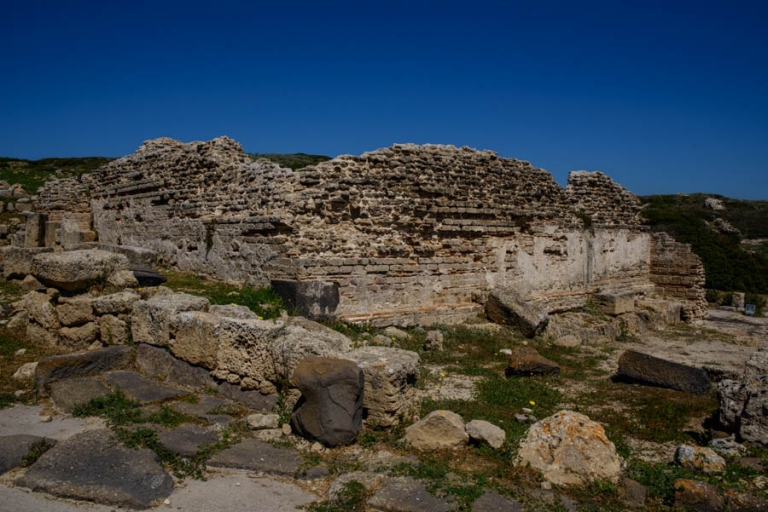 The temple of Doric

The Punic temple of Doric which its two semi columns is located in the city area reserved for religious buildings. You’re not allowed to touch or stand on some of the rocks but others are easily accessible.

We really enjoyed walking around this area. It is by far the area the most intact and because of that it’s easier to visualise what the city might have looked like. This is the archeological area that the kids enjoyed the most. 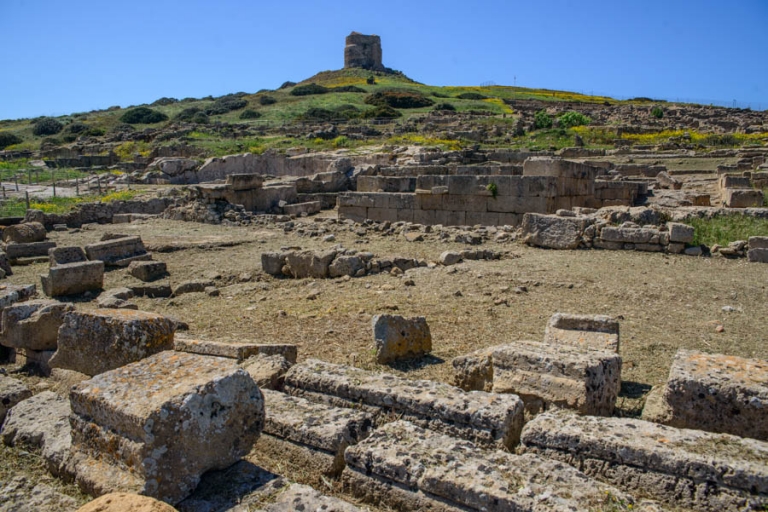 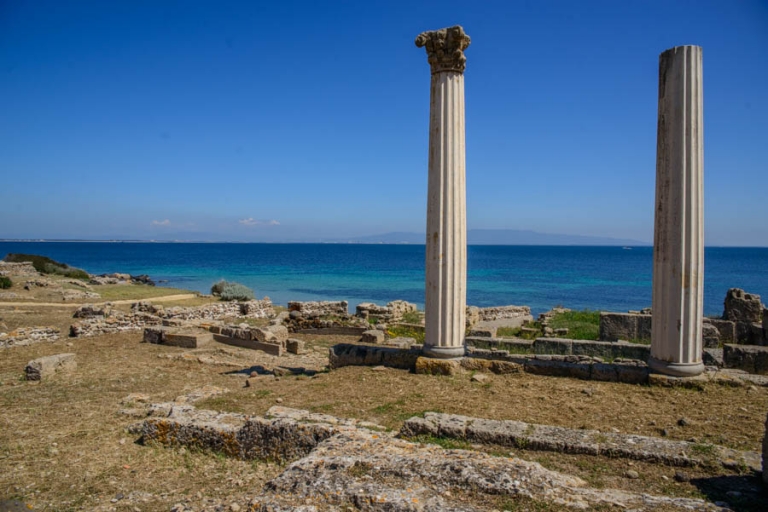 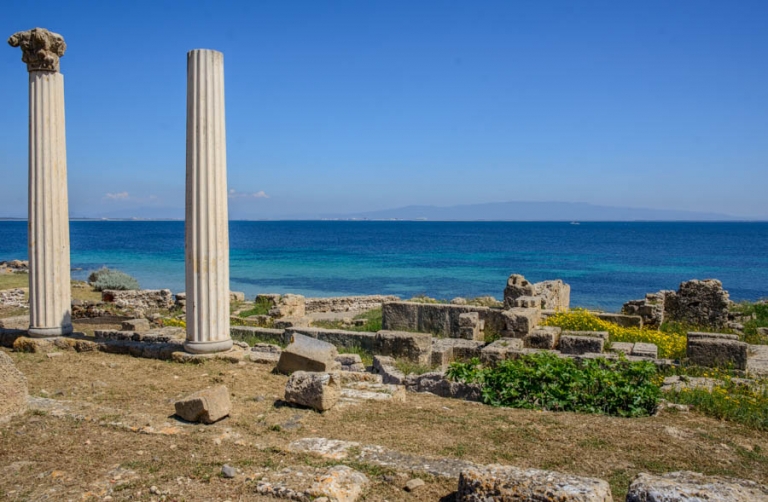 There are three thermal facilities on the Tharros site which represent old and new and an introduction of christian cult later in the years. One may have served as a baptism pool. 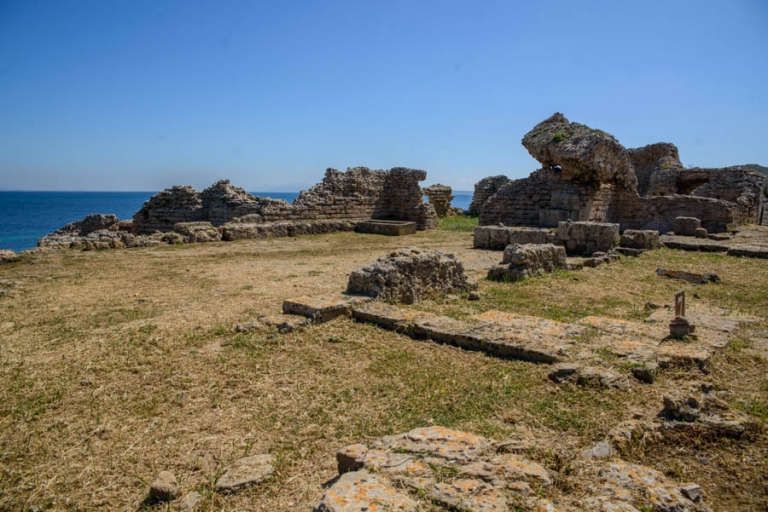 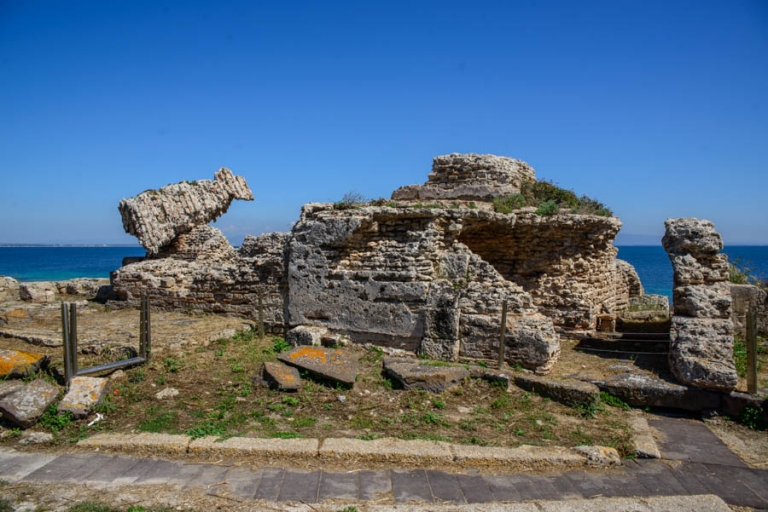 I have totally forgotten what temple this is! 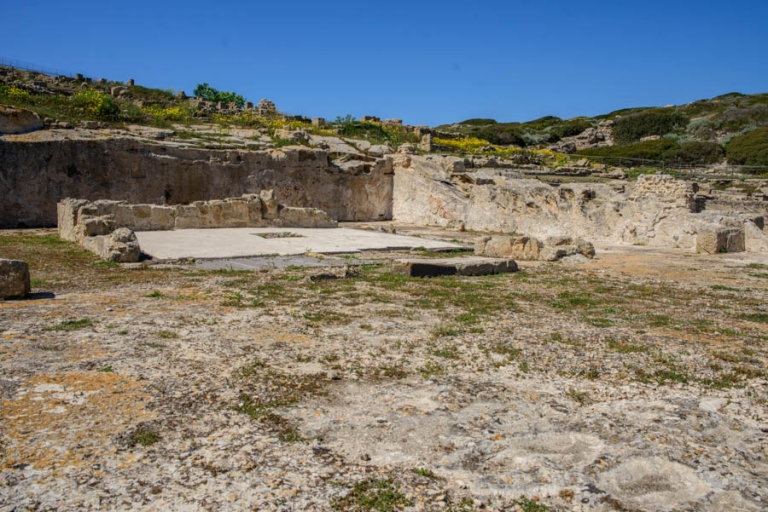 I think this was the third thermal on site and the one in best condition, possible because of its younger age. 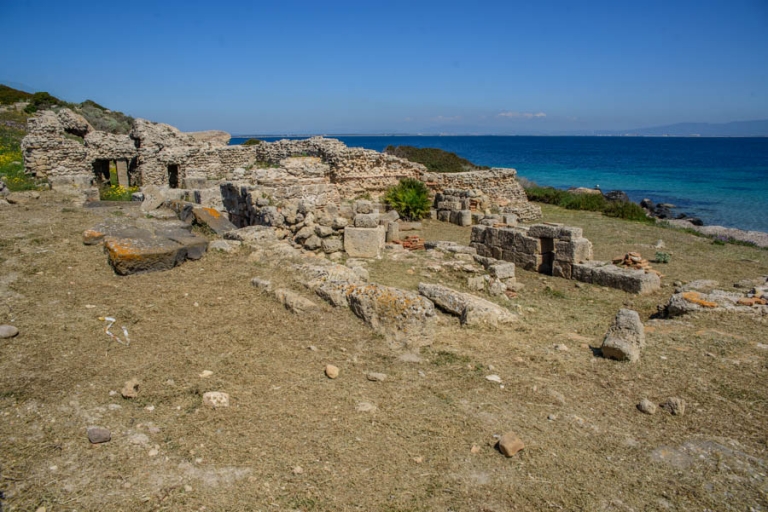 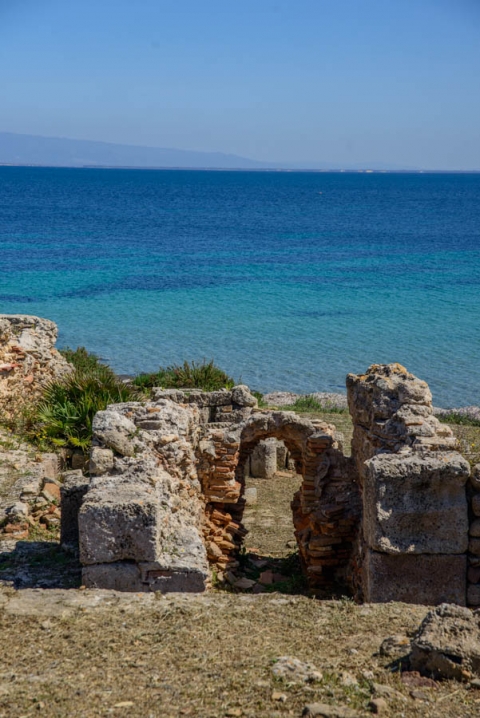 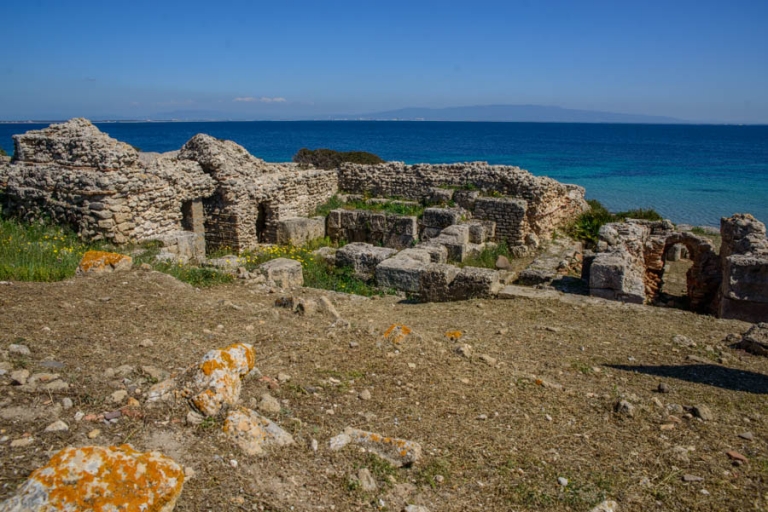 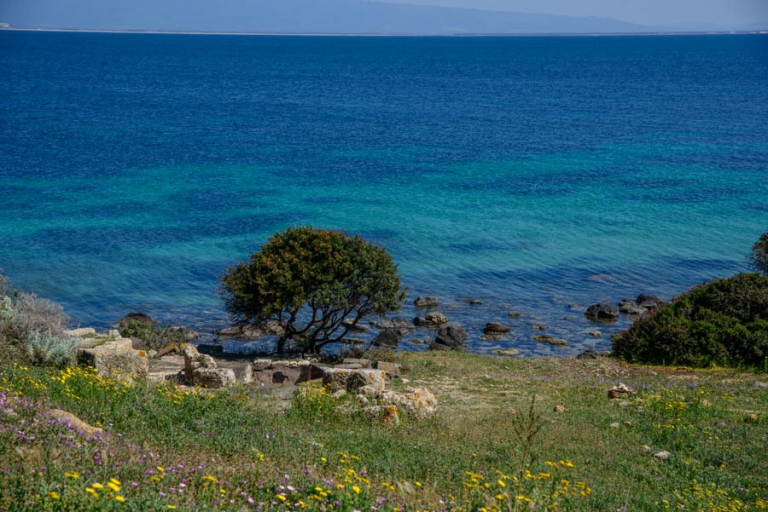 Murrua Mannu Hill represents a cross section of Sardinian history where it’s thought a C16th BC Nuragic village was originally built. Some of the circular mounds can still be seen today. 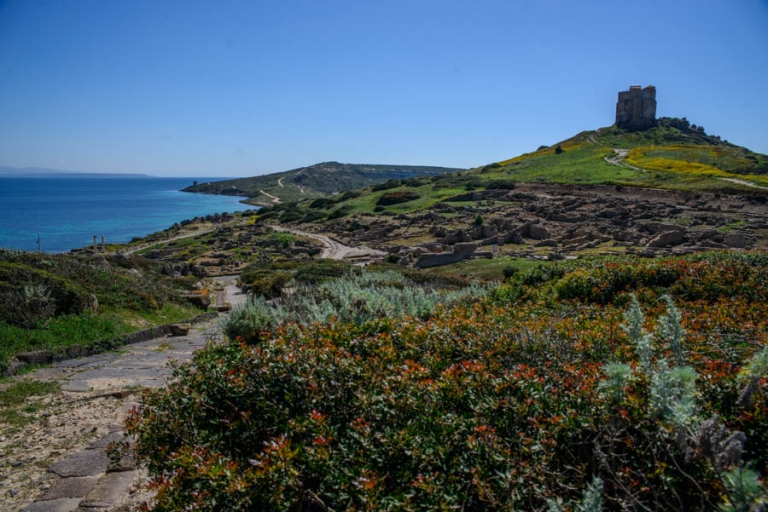 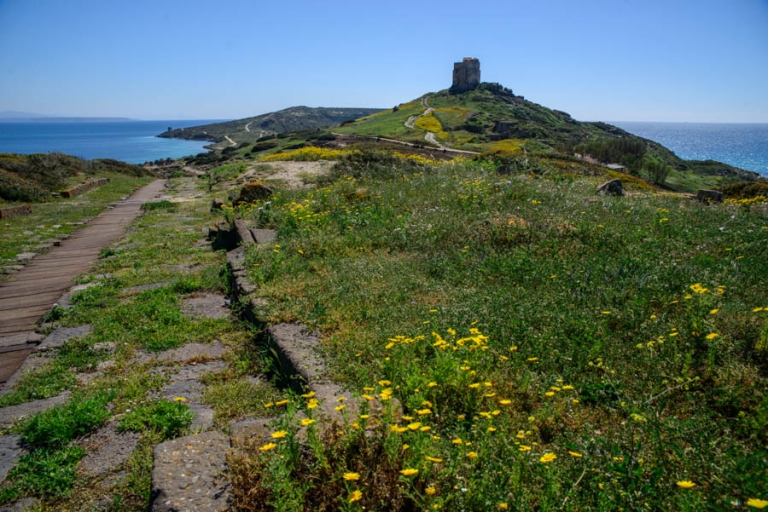 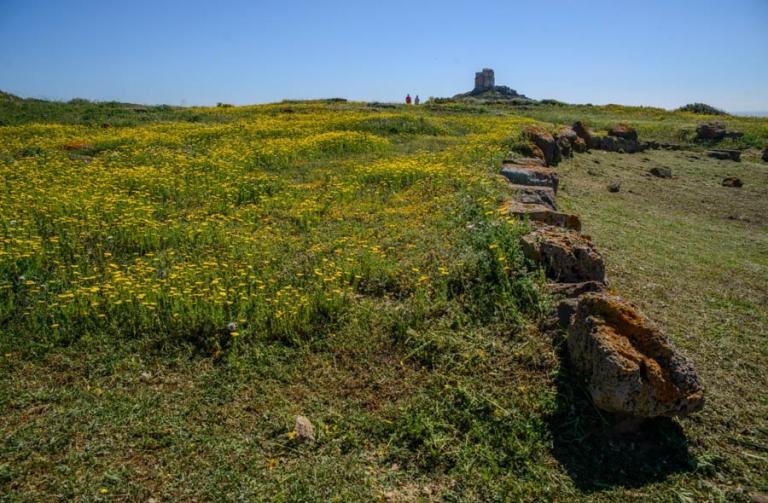 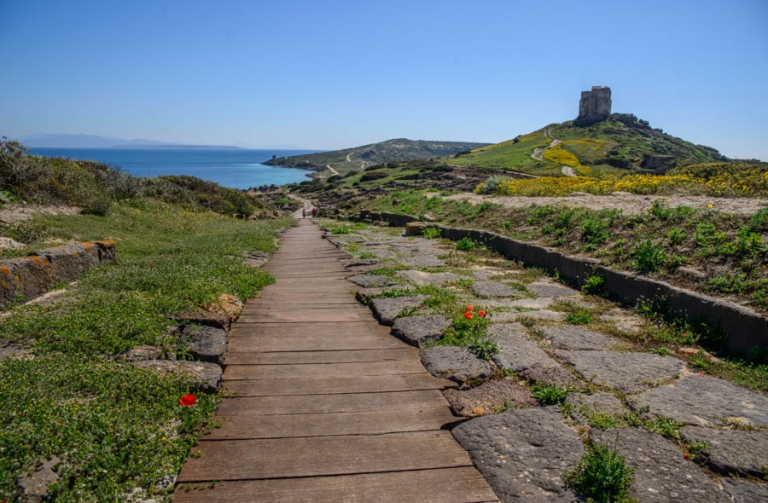 Our thoughts on Tharros

We really enjoyed Tharros and it certainly helped that once we’d paid and collected our tickets that we could come and go all day according to our whim.

There is a second tower, visible and accessible from the tower of San Giovani that we opted not to see.  Instead we went to the San Giovani beach and then later the beach of Mari Ermi.

Spread the love
2
Shares
2
Shares
Posted in Italy
« How to spend half a day at Tempio Di Antas. Sardinia.
How To Book Flamenco Tickets In Seville »