The 3 best beaches for kids on the Isle of Skye

The west coast of Scotland is a serene and idyllic part of the world and oddly enough, it’s home to some of the most stunning beaches we’ve ever seen. Of course that’s if you ignore the near constant rain and frequent minus degree temperatures. Nevertheless here’s our, very subjective choice of three best beaches for kids on the Isle of Skye. Disclaimer: You’ll need to hike to all of these beaches so they might be more suitable for parents willing to hike with kids or older kids.

Almost the most south-westerly point of the Isle of Skye harbours a tropical looking beach, fresh with white sand, turquoise clear waters and surrounded by rocks perfect for scrambling!

The beach is gloriously inviting but the water is a little on the chilly side – although this didn’t stop our kids. You can camp here, have BBQs, the waters are so perfect you could easily snorkel or paddle board (with a wetsuit). It’s also dog friendly.

This whole area is perfect for adventurous kids who want a bit of independence as there are loads of small coves and also other beaches in the area. You’ll need to park up just past the Aird Old Church Gallery and hike over to the beach (from memory it’s roughly 3km and the car park is suitable for motorhomes). Don’t miss the sharp left turn off that takes you up and over the rocky hill – it is signposted.

Flanked by the jagged Black Cuillin Mountains, Camasunary is the shortened Gaelic name Camas Fhionnairigh and means “Bay of the White Shieling”.  Shieling, a Scottish word, meaning a roughly constructed hut used while pasturing animals or an area of pasture, and when you see the area you’ll understand why.

Park at the Camasunary Car Park (suitable for motorhomes), walk through the gate and up and over the very rough path (from memory about 6km).  With The Bad Step, Loch Coruisk and River Scavaig just around the corner, you could make a night of it and stay at probably the MOST remote holiday home in the UK Camasunarie or stay at the Camasunary Bothie for free.  You can 4×4 to this privately owned cove but you’ll need to contact the Camasunarie Holiday Home and pay for the gate’s code.

The beach suffers from commercial fishing debris but the waters are perfect for kids and definitely great for paddle boarding. You can camp here and light BBQs too. It’s dog friendly and our kids and dog had a wonderful time in the crystal clear streams and on the beach.

Probably the most well-known of all the beaches I’ve written about and by far the shortest and easiest hike – although watch out for the rabbit holes!

This beach is on the north-west of the island and the wind can be blustery although it doesn’t detract from the beach and hill behind it. Despite its name, the beach is actually made of fossilised and sun-bleached algae. At low tide and on a nice day, you could explore the tidal island of Lampay, which is just a short walk across the bay.

The car park here is not suitable for motorhomes and is roughly 2 km from the beach. I think you can also walk over from Dunvegan Castle which is roughly 6km away.

Where To Find The Beaches On The Isle of Skye

Open this in GoogleMaps to find the beach locations.

Where Could You Stay On The Isle Of Skye

We stayed in a beautiful, old, white cottage down in Ardvasar in the south-west corner of Skye. It was very quiet and had quick access to the Aird of Sleat beach. 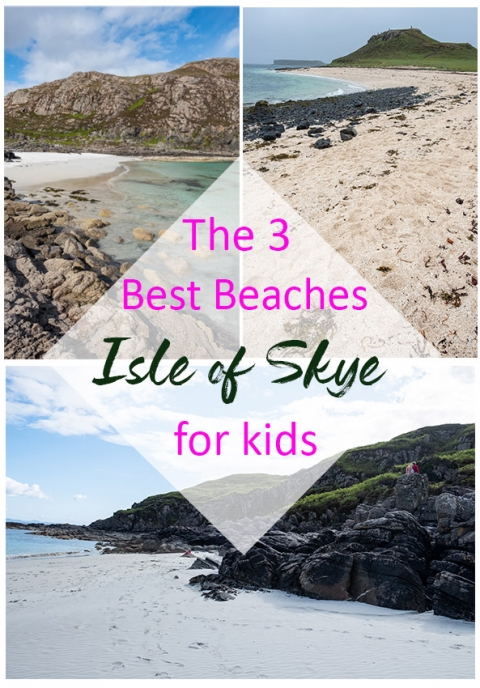 What Else Could You Do In Scotland?

Spread the love
Posted in Scotland

« Should I take my kids to Sumatra? What to know about travelling there20 places to eat vegan with kids in Norwich »