The Natural Pools of Porto Moniz in Madeira: Visiting With Kids

At the far north-westerly point of Madeira is a little community called Porto Moniz. During the summer months it is a tourist hot-spot but out of season, if you’re brave enough to take a dip, the pools are virtually empty. If you’re considering visiting Madeira with your kids and looking for things to do, this post is about how and why you should visit Porto Moniz in Madeira. 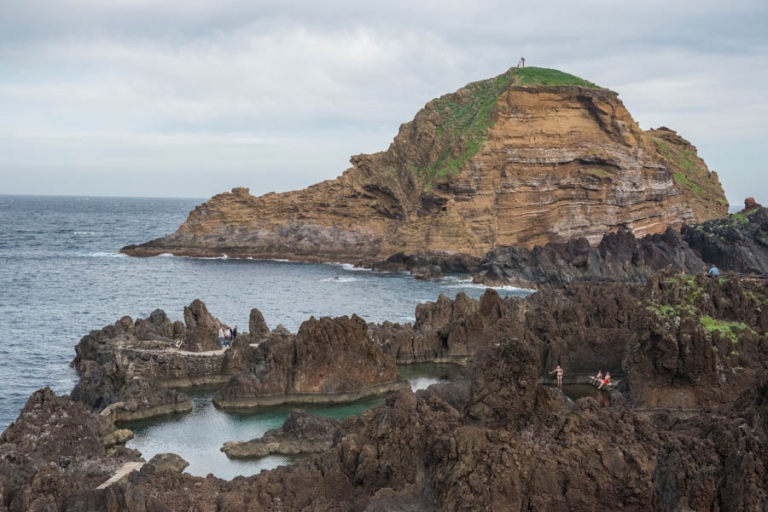 The natural pools of Porto Moniz with Mole Island in the background.

How To Get There

Following the twisty turny, often single road from Santana is an experience not to miss. The road frequently goes through tunnels, around rocks and under overhanging rock-faces. Rock-slides are frequent but don’t worry because you can’t drive quickly anyway!

One tunnel has water pouring through it and you have the option to follow a lesser known coastal route but you do so at your own precaution and these routes are sometimes barriered off.

I am in the process of making a video of driving on this road. At times very funny to see locals refuse to back down to tourists and tourists would have to reverse back until they found a spot wide enough to allow the local through.  It was really hilarious one evening when we were driving through and a French man who couldn’t reverse was shouting obscenities out of the window, in French, at the Portuguese man who really didn’t care. We were in hysterics. 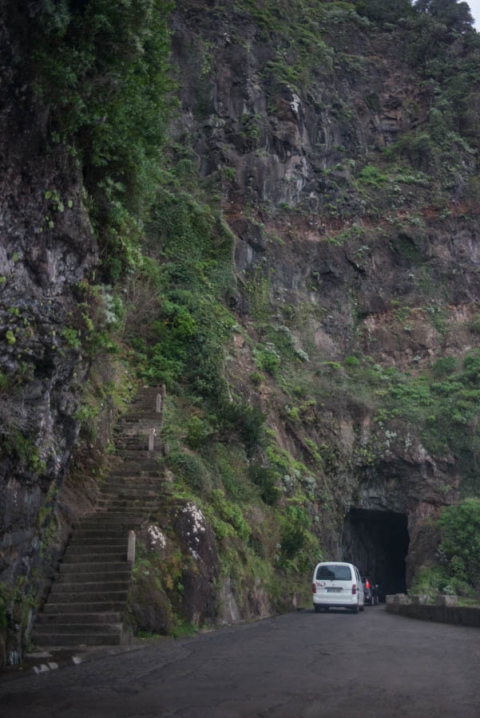 Driving through a tunnel on the way to Porto Moniz. 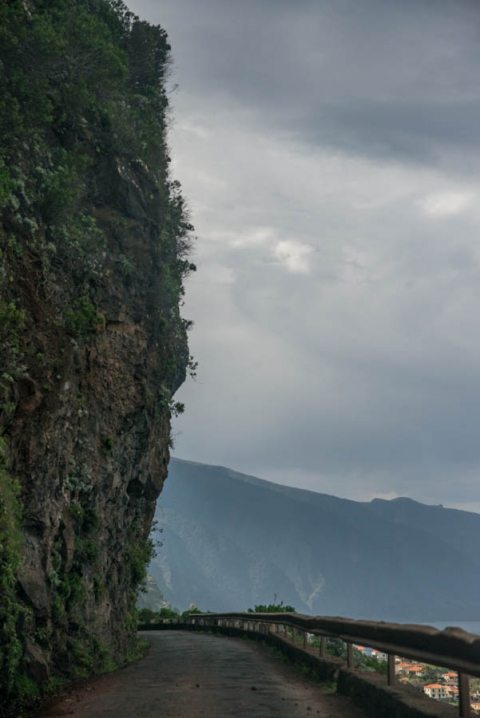 Overhanging rock on the road to Porto Moniz Madeira

The natural pools in Porto Moniz Madeira have been formed out of volcanic lava (blocked up in places with concrete) and filled with crystal clear sea water and an array of marine life.  Despite visiting in bleak winter (January) we saw tropical, rainbow coloured fish and sea slugs. 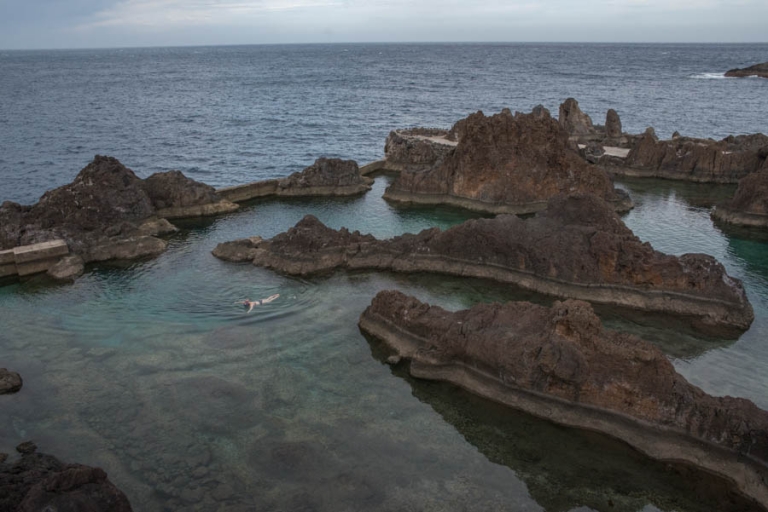 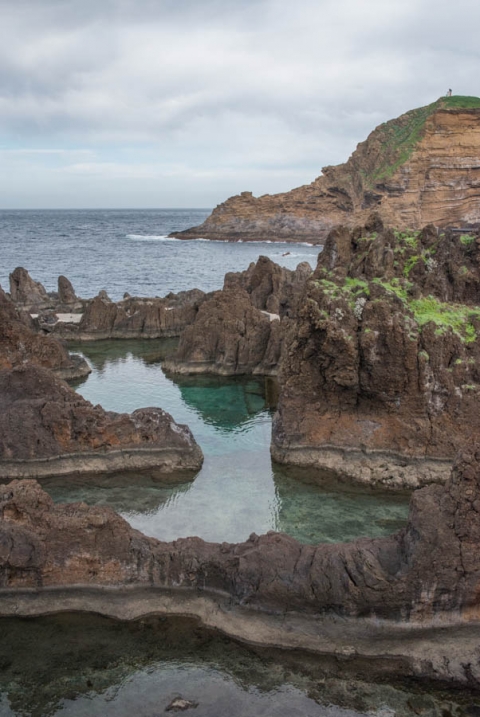 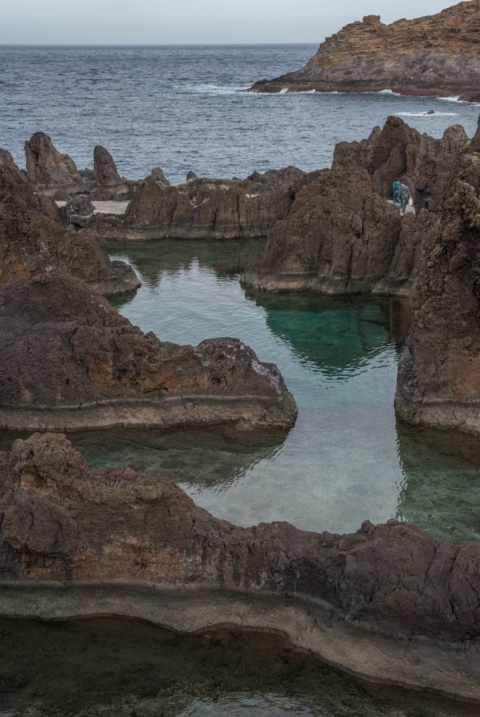 The pools are fed at one side by the waves and if you’re brave enough to brace those waves, there are some smaller pools nestled into the rocks. It could be like having your very own sea shower whilst protected in the cove of the rocks. How romantic! 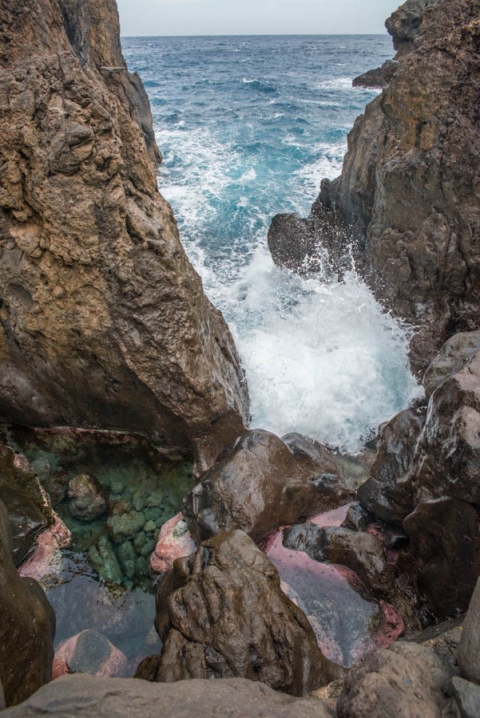 The waves re-filling the natural rockpools at Porto Moniz.

What else could you do in Madeira?

Our kids LOVE the water and of course the turquoise glistening lured them in but BRRR you’d have to be brave to dip your toe in. In the winter months’ the temperature is only about 22*c, I would say the waters are a chilly 6*c. 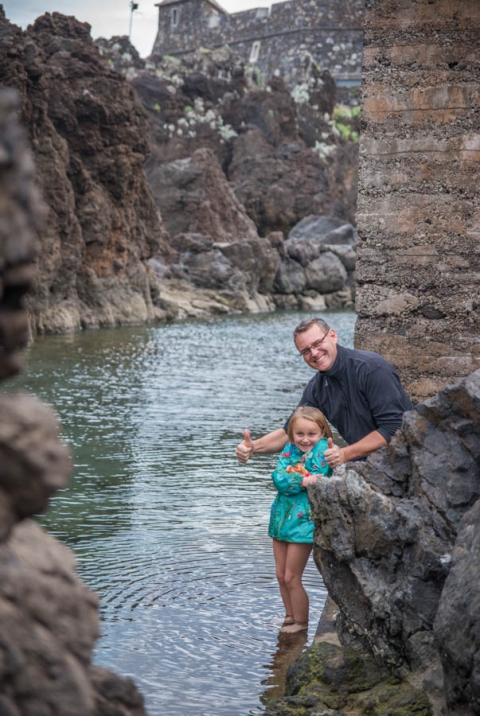 The waters are as clear as you’ll ever get them but that’s of course only if you can get in them first. I’m sure in the summer periods, these pools are full and much warmer but in January, they’re a bit cold. 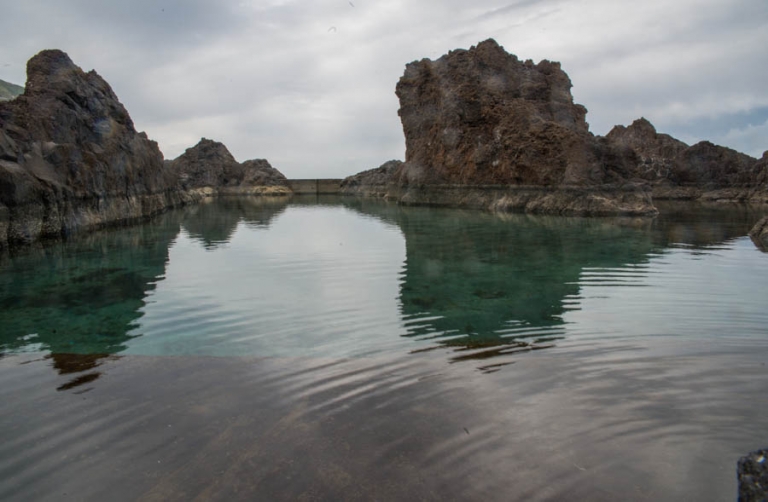 The town of Porto Moniz Madeira

The town is quite small with a selection of small restaurants, car parking (you are supposed to pay) and some shops. It is nothing great to write about but we did eat at the restaurant just opposite the pools, on the corner.

We ate tomato soup (be careful as it has hard boiled eggs in it?), salad, stuffed pepper, a mushroom dish and chips. It was really quite nice but if you’re vegan you’ll need to ask them to remove the animal products. 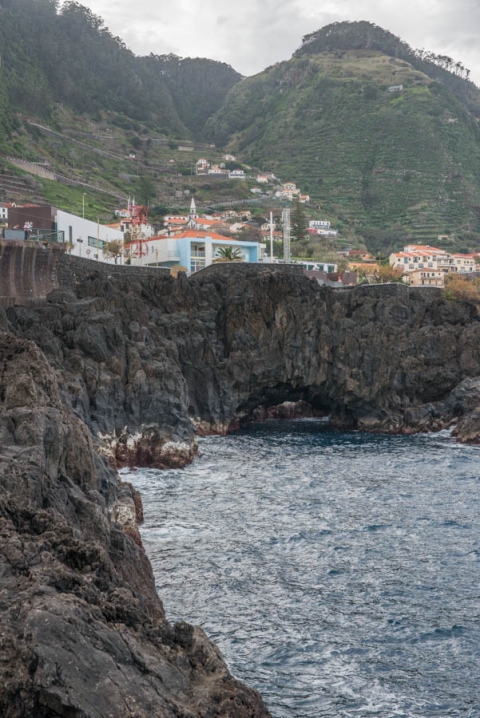 Part of the town with a natural cave underneath. 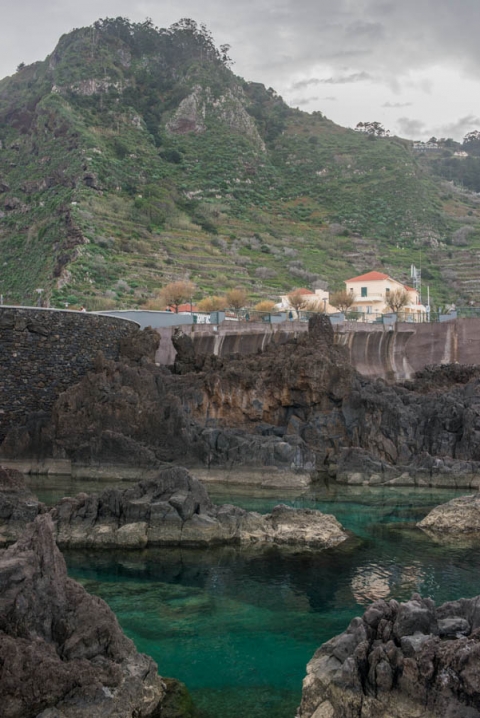 Porto Moniz in the background with the pools in the foreground. 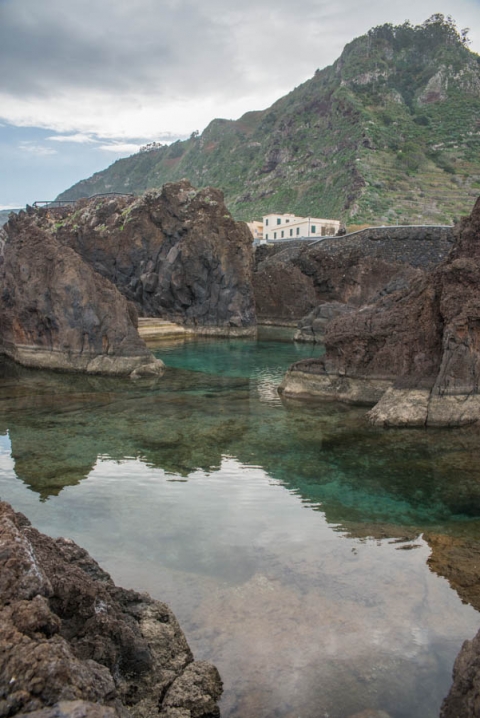 Porto Moniz and the mountains behind.

Looking for somewhere to stay? Have a look on booking.com

Mole island is entirely cut off from Porto Moniz and apparently provides an excellent place for bird watching. I am unsure though if you are allowed to go across to it. 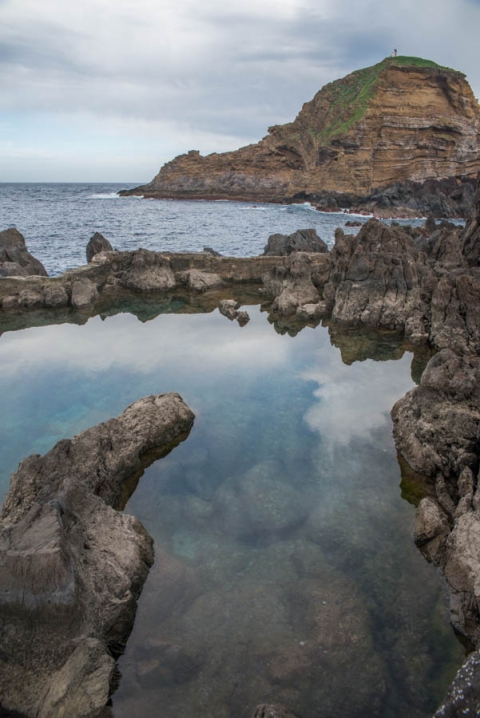 Porto Moniz and the Island Mole in the background. 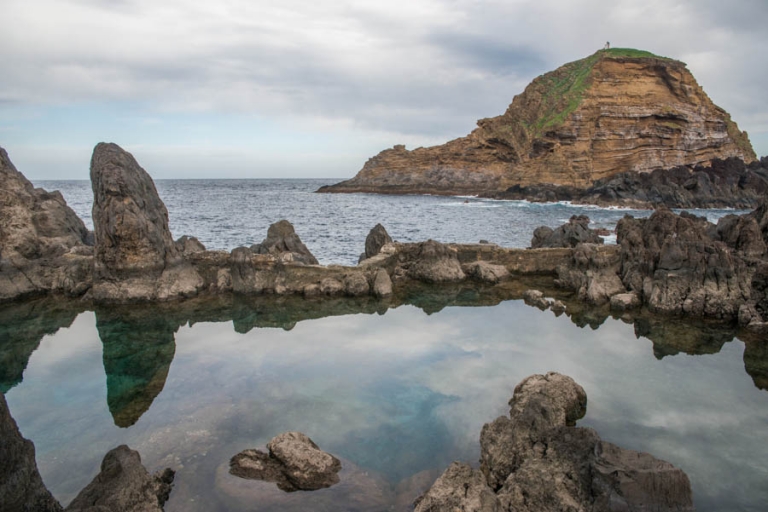 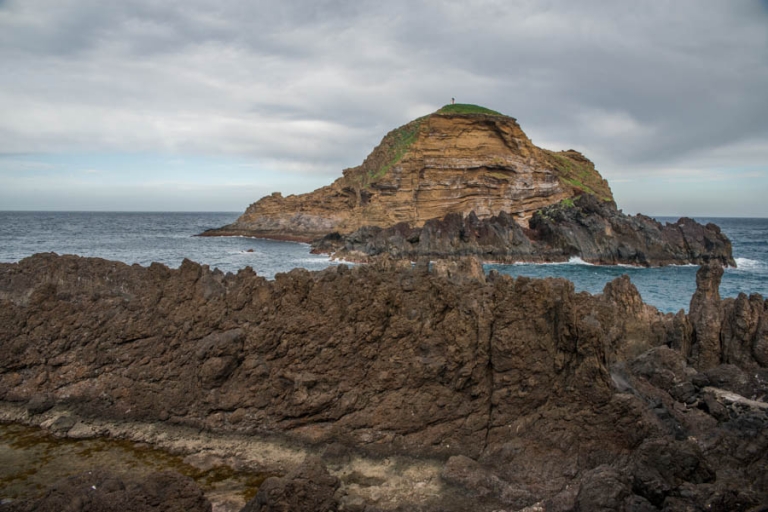 Other Suggestions On What To Do In Madeira

Are you visiting Madeira with kids? Check out our other posts on what to do there.