The Tangkahan Elephant Sanctuary is a BIG CON!

It breaks my heart to write this but the truth is we were conned and we supported atrocious cruelty to these majestic creatures that we adore.  I am so upset and angry with myself that I fell for this. Tangkahan Elephant Sanctuary is NOT a sanctuary – it’s a glorified prison and abuse centre. I would never have supported it had I known and I’m really hoping that by writing this post, I can deter others from going too.  My three children left horrified and in tears at what they had seen and we all vowed never to return.

When we heard there was a sanctuary that rescued elephants from abusive situations and protected them, we jumped at the chance to go. I should have done more research and I foolishly believed that because the company had won an award from the Indonesian Government that it could be trusted. WRONG!

This is what we discovered:

Their pen is too small

The first thing we noticed was just how small their holding pen is.  Elephants form deep family bonds and live in tight matriarchal family groups as herds but their pen was tiny.

Some people claim that the elephants want to stay there and base their beliefs on the electric fence being so flimsy however most elephants have been previously terrorised and electrocuted and are thus terrified of any electric shock.

You should know that the elephants are ridden by tourists on their backs! Not once per day but multiple times.

When we learned that these elephants are ridden on jungle walks for tourists as well as short tourist tours prior to washing, we knew immediately it was not a sanctuary. It is an abomination to ride these creatures. Not only do they hate it (and they’ve been chronically broken to force them to allow people on their backs) but it can cripple their bones and put them in agony. 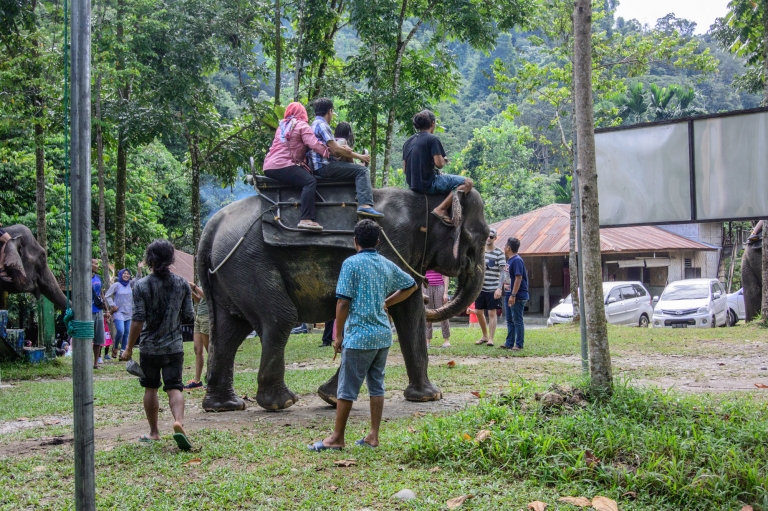 Elephants were left near the entrance to the building where we were supposed to wait.  Here we witnessed a young female traveller attempting to get a selfie with a small elephant in close proximity.

It was very clear to see the elephant was distressed by her trying to get close. It tried to back away as best it could, obviously fearful and hesitant of repercussions it would suffer for moving.

I would say these elephants are scared of their keepers too.

As we were walking down the path to bathe the elephants in the river they tried to walk as far away from us as possible. It gave the perception that they are genuinely petrified of humans and want nothing to do with them. The moment we got a bit too close, they would flinch and try to move away.

These elephants were beaten

My son witnessed one of the elephants being beaten with a bull hook on the side of his head. When we challenged the keeper he at first stated it happened during the hike, then he pretended not to understand us and then shoo’d us away.

We also witnessed the keepers pulling their ears, kicking them, punching them and jabbing them with a hand held needle.

They’re shouted at until they obey

Some of the elephants weren’t ridden and were in a field opposite the river. They were forced to come by being ridden and dragged over. Frequently the baby was forced over and the mother reluctantly followed and vice versa although you could see it wasn’t through choice.

Once in the water, the elephants were constantly ordered around by keepers shouting commands. There was nothing natural about the experience at all. It was plain to see that the elephants did not want to be there and were not enjoying the experience.

They were also anally violated

I can’t think of any plausible reason as to why the elephants are anally violated before going in the water. Some reports have said it is because they don’t want poo whilst in the water but surely tourists realise that animals poo?

Even if they do poo in the water, the river would wash it away as the elephant’s bottom is facing downstream so I am perplexed as to why the elephants are subjected to this. It was quite painful for them and you could see that by watching them.

They’re forced to lie down in the water

It was apparent to us that the elephants did not want to be bathed. They had to be forced and shouted at to coax them into the water and then they were pinned down to keep them there.

I didn’t manage to film the feeding but I would suspect from their behaviour and frantic eating that they were incredibly hungry.

Why else would an elephant try to hoard food, hidden in its trunk?

And then they’re forced to perform tricks

Tangkahan Elephant Sanctuary is not paradise

The marketing for this place describes it as an elephant paradise but I can assure you for these intelligent creatures, it must be hell.

There was only one occasion when the elephants seemed  happy and that was during the fifteen minutes they were allowed to eat vegetation from the banks.  As far as I can tell this was about the only normal behaviour that they exhibited in our time there. 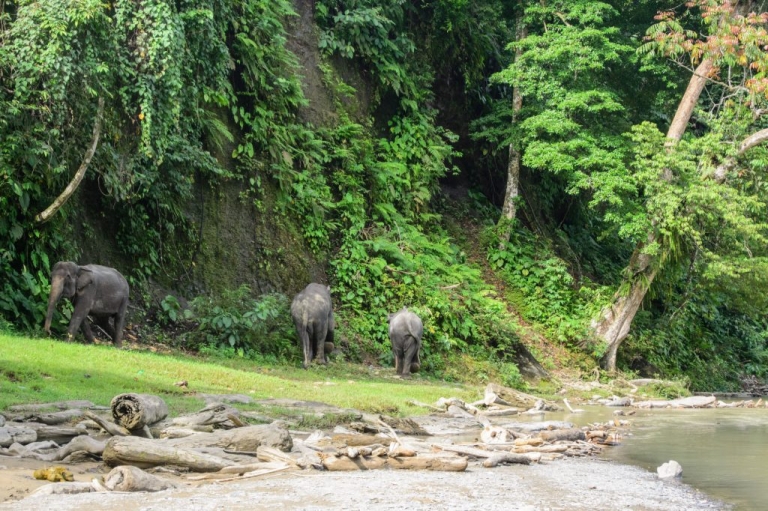 Video from The Tangkahan Elephant Sanctuary

If you are sensitive to animal cruelty this video might upset you.