We climbed Jabal Burdah with kids

Warning: getimagesize(): Failed to enable crypto in /home/journey5/public_html/wp-content/plugins/aesop-story-engine/public/includes/components/component-image.php on line 40


Jabal Burdah, one of three rock arches in Wadi Rum, is the highest and most challenging to climb but we were determined that we could climb it with our kids aged 8 and 10 years and so we did.

Sitting in the south-west of Jordan’s kingdom close to the border of Saudi Arabia, Wadi Rum which means Valley Rum, is an adventurers’ paradise. With its expanse of flat, sandy basin and labyrinth of dusty canyons that lie between the dramatic jutting sandstone and granite rock formations, it is the perfect place for off the beaten track hikers, campers and climbers.

Just how much adventure you’re up for will determine how long you spend here but I definitely recommend it be longer than shorter. If you’re wondering what else you can do here check out our post on 26 things to do from Wadi Rum.

Bridges in the area

Wadi Rum desert is the largest wadi in Jordan, 300 square miles to be precise and it’s pretty spectacular. Whatever I was expecting it was a thousand times better and it really blew my mind.

In fact, something strange happened to me in that desert and it confirmed just how connected we are to nature and the rocks around us. Maybe it was an epiphany or maybe some kind of spiritual awakening but those rocks had a powerful allure on me and they keep calling me back. I found the entire area phenomenal and nothing quite like I’d ever seen before.

In some respects the Wadi is similar to the rocks at Red Rock Canyon in America in that they’re soft rocks, carved by the forces of nature.  Over time (think millions of years) the wind and rain has carved out its paths on the softer Rum mountains, leaving the rock in all different shapes and sizes. The most striking of these formations are the rock bridges and there are several that can be seen directly within the area.

The three most famous rock bridge in the Wadi Rum desert are:

Jabal Burdah is considered one of the highest natural arches in the world and in our opinion, one of the most spectacular sites we’ve seen so far on our travels. I think it helped enormously that we were one of just two groups scrambling it that day and we got to really appreciate the silence and aura around us.

The arch  is located at 29°28’24″N, 35°30’00″E and spans a deep gully.  It sits roughly 300 metres off the ground and 35 metres from the nearest rock. Either way, if you fall, you’re dead but don’t worry because the arch is actually quite wide and you’d have to be doing something pretty risky to fall off!

It is described by many guide pages as a strenuous and technical hike but I would disagree with this and so does the French grade scale.  Jabal Burdah is rated as a Grade 3 on the French scale, with the scale starting at 1 and working upwards indefinitely.

That’s not to say that this hike is easy, it does require concentration and a degree of strength but it’s far from impossible. There are also many guides who impose an age restriction on the mountain and won’t take kids younger than teenagers.

Our kids were 8 and 10 years at the time of hiking this.  They are quite experienced walkers, we’ve taken them hiking on one of the highest peaks in Madeira, they’ve climbed Acetenango Volcano in Guatemala, Preikerstolen in Norway, a smaller volcano (Sibayak)  in Sumatra, they’ve also been walking in the Ciucas Mountains of Romania, the Rila Mountains of Bulgaria and many more that I haven’t documented.

However the point I’m trying to make is that an age restriction is unnecessary and anything is possible. Our guide was provided by Um Sabatah Camp and I cannot recommend them highly enough.

The depths of winter

I’ve read that during the summer months, the rocks reflect the heat and cook you like an oven.  Even in winter the sun can be strong but it is the wind that will chaff your face the most.

We used coconut oil on our faces to protect them but even then they were a little raw and pink by the end of the day. Don’t underestimate the weather here, it has the potential to change quickly. Make sure you dress appropriately – lots of thin layers – and take enough water.

We parked up at the bottom of what I think is the north face and we encountered about five other 4x4s. I was a little worried that the mountain would be overrun with other people but thankfully they were just there to have a look at the arch from the ground and take photos.  We encountered one (rather rotund and unprepared looking) couple in their late 40s who had obviously attempted it and given up and said it wasn’t for them.   All the more mountain for us!

The climb started off as it meant to go on, easy-ish moves on rounded and slightly slippy rock. There was certainly nothing to really get a grip of at this early stage although it wasn’t necessary.

Most of the Bedouins in the area hike in their barefeet as it gives them more grip but we wore trainers with good sole-grip. I love the idea of hiking barefoot but the reality is nobody wants to see my disgusting feet. 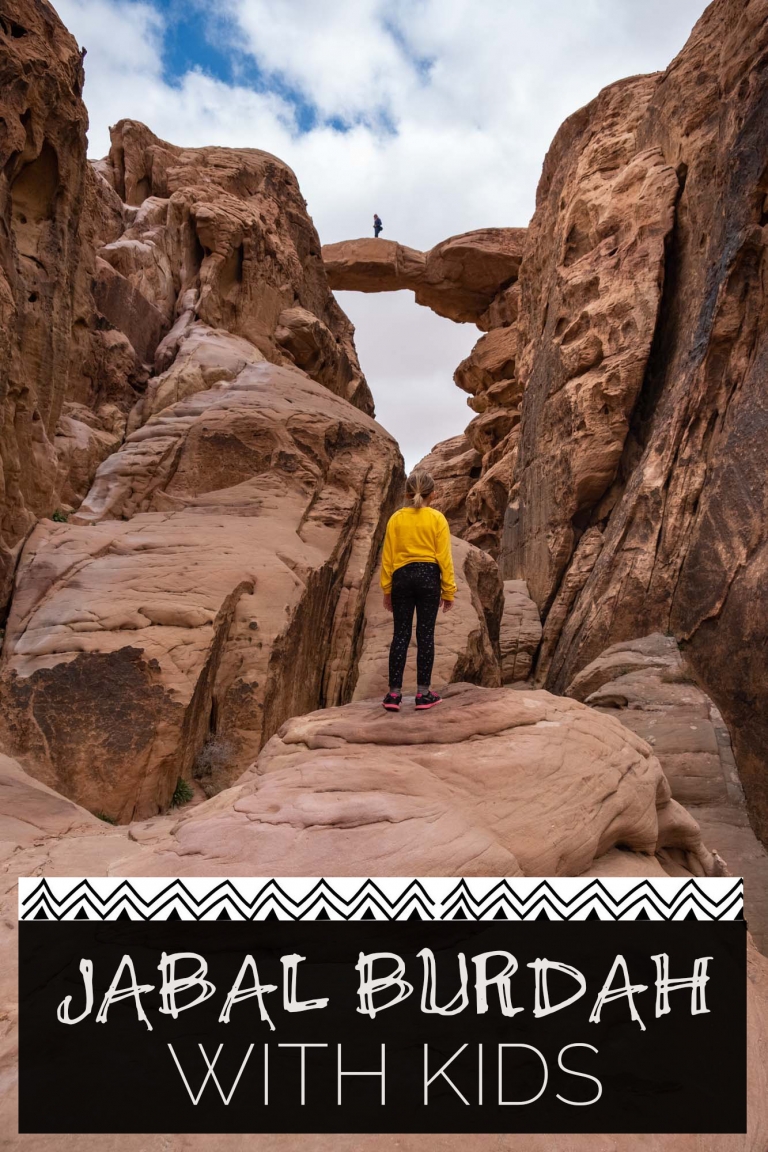 Within a few minutes we had made progress and had scaled what seemed a large height but the reality was different lol. We progressed slowly and leisurely to give the kids a chance to appreicate the views and for me to take photos.  It was all onwards and upwards and I’m glad we had our guide because the cairns seemed so randomly placed I’m sure I wouldn’t have been able to follow them.

Although I quip about our slow progress, we did manage to scale Jabal Burdah arch and return in under three hours. Not the quickest time but we really did appreciate the vista.

We crossed an upper basin that had a surface similar to the moon – I guess that’s why this area has earned itself its nickname of  ‘Valley of the Moon’. Grey rock, sandy floor and small, green scrub bushes, surrounded by pillars and domes. I thought it was all very barren but we did see a few beetles en route.

Within about an hour you should have sight of the rock arch and it’s an impressive sight.  You’ll arrive at Burdah on the west side and  it is this last, small section that provides the most challenging part of the hike.

The ascent to the bridge

In order to arrive at the rock arch, you’ll need to propel yourself up a ledge which I’d guess is around 1.5m/5ft.  For most people this is not a problem but us short people and children it can be a little tricky.

The ledge is narrow and the height is out of reach of most kids under 12. We took a rope to support our kids on this section and I’m glad we did. It gave a psychological safety net even if it was a little primitive in use.

I found it much easier to climb backwards whilst lifiting myself up and then turning around to grip on the final lift. Whilst this sounds complicated it actually isn’t and like anything slightly daunting it is your brain you need to convince and not you!

Onto the Jabal Burdah bridge

From the ledge you’re level with the arch and it is just a short walk over to the bridge; a mesmerising sight.   I couldn’t quite believe we were there and photographing the kids walking over was an achievement I hope they look back on in years to come with appreication and grattidue.

I am not great with heights – even though I push myself every year to complete higher and more gruelling hikes – I still do not like looking down! Walking over the arch was easier than I imagined. For starters it’s much wider than I anticipated, so wide you can’t see over or at least the drop under you. That view is saved for once you’ve crossed it.

The view across the valley

We took our time to appreicate the views. We sat down and chatted for ages, enjoying the sun and having a drink. Our guide was really approachable and we used that opportunity to find out more about his life and the history of the area.

What makes this mountain challenging?

You can go from soft to hard stone in just a footstep which makes it difficult to predict how the rock will react. Most of the sandstone is incredibly soft and worn.  There’d been some rain before we went which had washed the rocks leaving them in poor quality; slippy, often lacking grip holes and quick to disintegrate.

Due to this the descent is much harder than the ascent and I found it often easier slipping down the rocks in a squat position than trying to climb.

In a maze of similar looking sand-stone domes and stacks how do you find your way? The Cairns were apparent but I guess you’d just learn to spot markers. I more than likely would not attempt this alone even with a decent guidebook.

You’ll hear horror stories of people dying on the Windy Mountain but please don’t fret.  There was an Irish man in 2006 and three French people in 2014 who died whilst rock climbing, not hiking.

There are sharp gulleys where you could fall but so long as you’re careful with where you’re placing your feet and don’t suddenly step backwards, it is not a challenging hike.

What other arches could you do with kids

If you don’t have a head for heights and don’t mind queueing for a photo, head to Umm Fruth which is roughly 15 metres high.

Alternatively, you could leave the immediate area of  Wadi Rum and head for the Rock Bridge of Kharaz.   Here there’s not just one arch but three exceptional arches very close to each other. The first one, called Rock Bridge of Kharaz is about 34 meters in length, eroded in a thin fin of white sandstone. The top is easily accessible by climbing a small sand dune leaning against one side. The second arch, a large rock shelter of about 26 meters length, is only 200 meters from the first and is located at 29°48’31″N, 35°27’15″E. 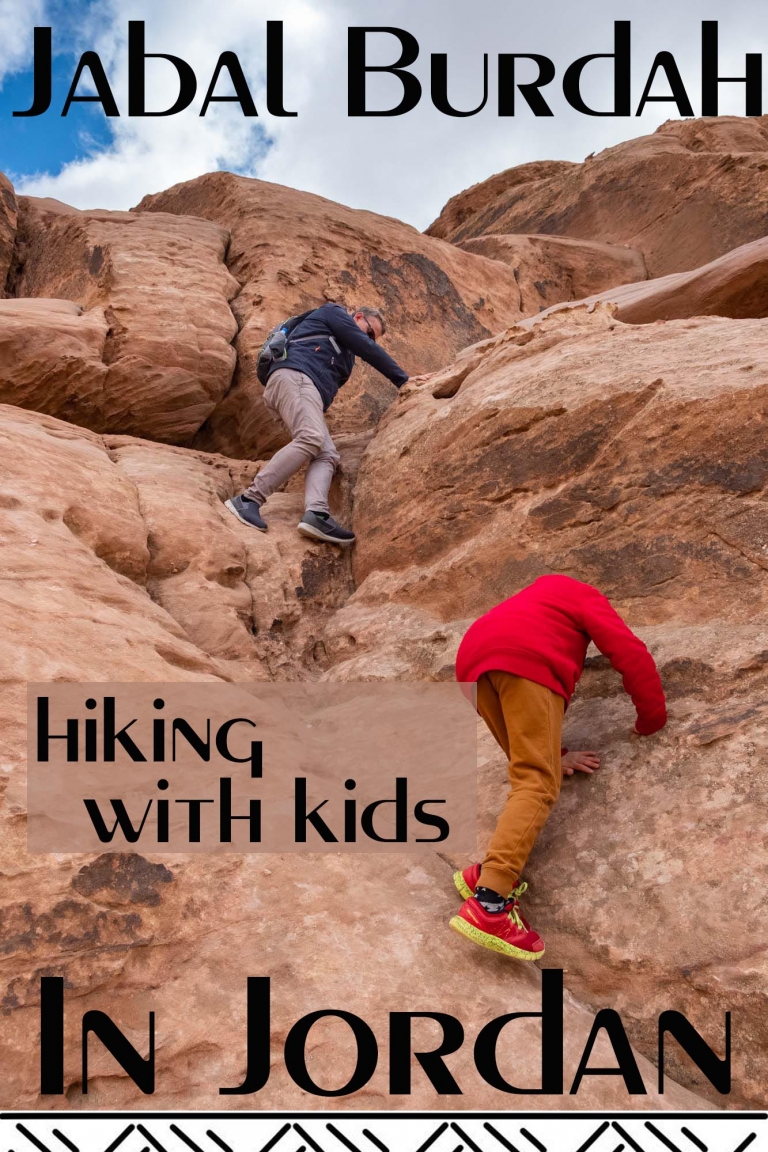 See our other posts

Jordan was an amazing adventure for us and really sparked something deep inside me to be more adventurous and appreciate the great outdoors more. Keep an eye out for our future posts on Jordan but for now, you can see what else we’ve been up to below.

Spread the love
Posted in Jordan