Go to the Teh Dar Show Saigon

Out of all of our travels HCMC/Saigon is the city that left the biggest and lasting impression on us. I had heard so much about it and it lived up to its expectations and way beyond. I loved how alive Saigon was with its constant noise and the street food smells.  I couldn’t wait to show the kids some Vietnamese art so we decided that we should go to the Opera House to watch Teh Dar Saigon. 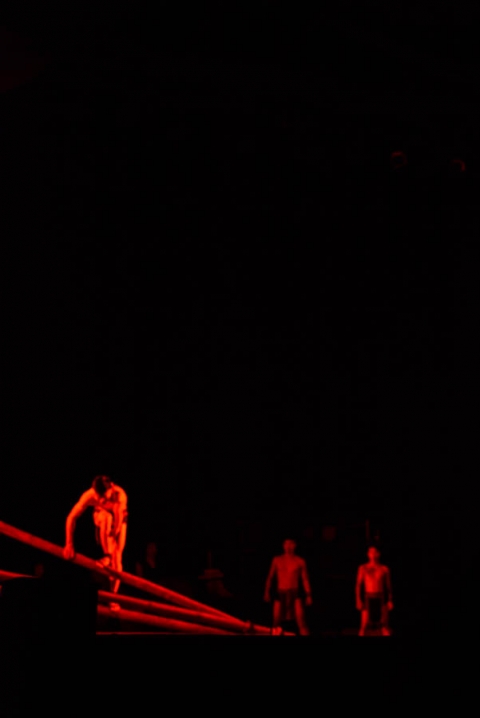 Photo from the performance.

Learning about the Opera House Saigon

The Municipal Theatre of Saigon is more frequently known as Saigon Opera House and I think it should stay that way. It has a much more glamorous sound to it even if it is a reminder of its colonial past.

The Opera House was custom built in 1897 by French architects. It was designed and shaped like the Opéra Garnier in Paris.  Its architectural style is influenced by the flamboyant style of the Third Republic with a façade shaped like the Petit Palais (which was built in France the same year).

The design of all the inscriptions, reliefs, décor and furnishings were drawn by a French artist and sent over from France however the building was criticised for being too ornate and in 1943 some of its decorations were removed.

From 1956 the Opera House was used as the home of the Lower House Assembly of South Vietnam but was later used as an evacuation centre for the French escaping northern Vietnam. It was not until 1975 that it was used again as a theatre. Although the Opera House could once accommodate nearly two thousand people, its current capacity is five-hundred seats. 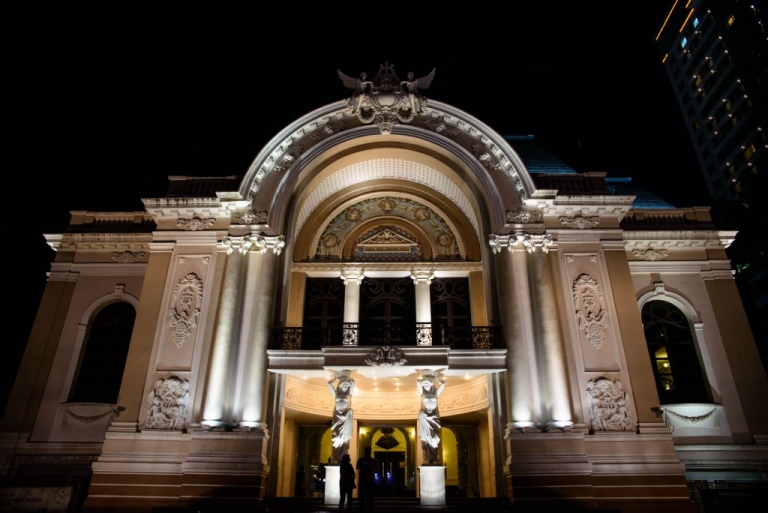 What is the Teh Dar Saigon show?

Developed in 2009, A O Show was the first production that introduced the concept of turning simple, daily-life objects like bamboo and iconic bamboo fishing baskets into circus art. Now A O Show frequently tours the world and the production of Teh Dar has taken its place.

Teh Dar draws its inspirational story from some of the tribal groups found in Vietnam’s Central Highlands. Vietnamese themes and cultures are portrayed through the show which features acrobatics, bamboo cirque, contemporary dance and folk instruments. 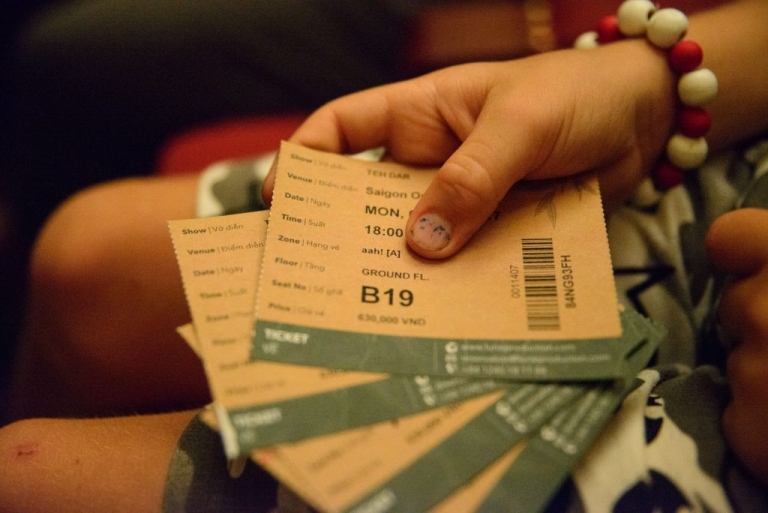 What to know about the performance

Featuring both male and female acrobats, dancers, musicians and singers, we enjoyed that the story portrayed Vietnamese culture.

The artists do lots of impressive tricks and the fast pace of the music sweeps you away. The gongs, drums and intense percussion paired with the fast nature of the dancing is mesmerising. I don’t think our kids moved for the entire production, they sat on the edge of their seats entranced.

Showtime is at 18:00 and there is no intermission as the show lasts sixty minutes. Prior to the show, if you get there in time, ticket holders can join a ten minute tour of the Opera House. Sadly we didn’t get there in time and missed taking photos from inside this wonderful old building. 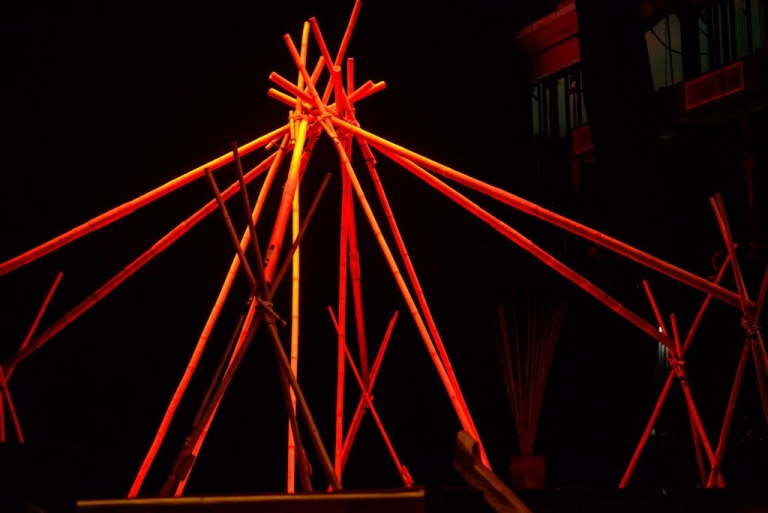 Some of the bamboo used in the performance.

You’re not allowed to take photos during the performance

Unlike Cambodia’s Phare Circus which allowed me to take photos, Teh Dar disallows it. Although I did manage to sneak a few lol.

After the show, the cast head to the lobby for an all singing photo opportunity which is really fun. 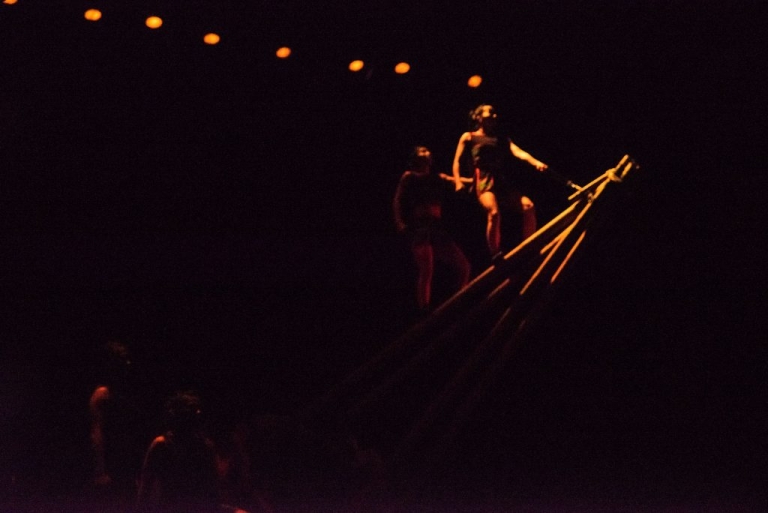 You can meet the performers after the show

The cast sit on the stairs in the lobby, singing and allow you to have your photo taken with them. It’s not only kids who hustle to the top of the queue either. 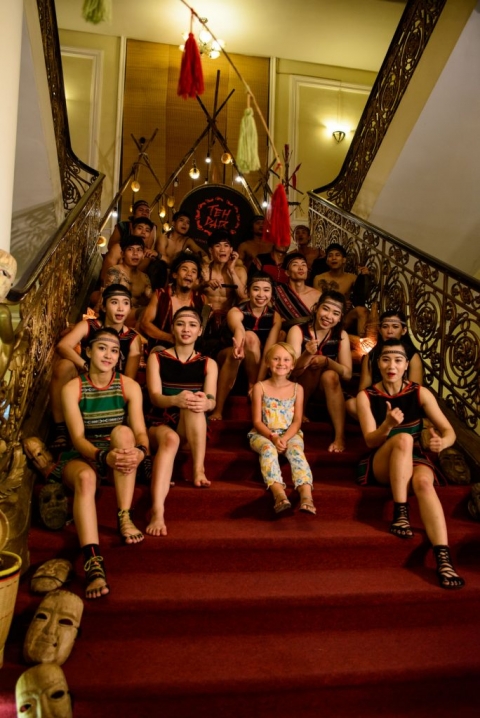 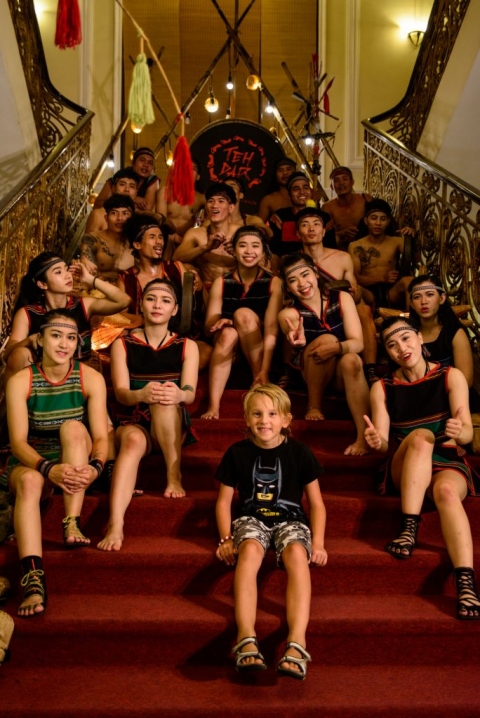 A very terrible video from after the Teh Dar Saigon show

I snatched this quick and terrible video on my phone of the wonderful cast singing and posing for photos.

How to book tickets

You can book tickets online directly through their website. Ticket pricing starts at 630,000 dong (about €23/£21/$27)  however they were fully booked for the time we were there so I got creative and searched google.

We came across tickets on Get Your Guide which cost us $96 for four. You can buy those here.

You can also buy tickets directly from the Opera House’s box office.

Spread the love
2
Shares
2
Shares
Posted in Vietnam
« The red zone ghost villages of Sinabung, Sumatra
Visiting The Cu Chi Tunnels With Kids; How do you fancy living in a tunnel? »