What is Les cascades, the water park in Trevoux, France like for families with kids? We took our son for his birthday and this is what we thought. 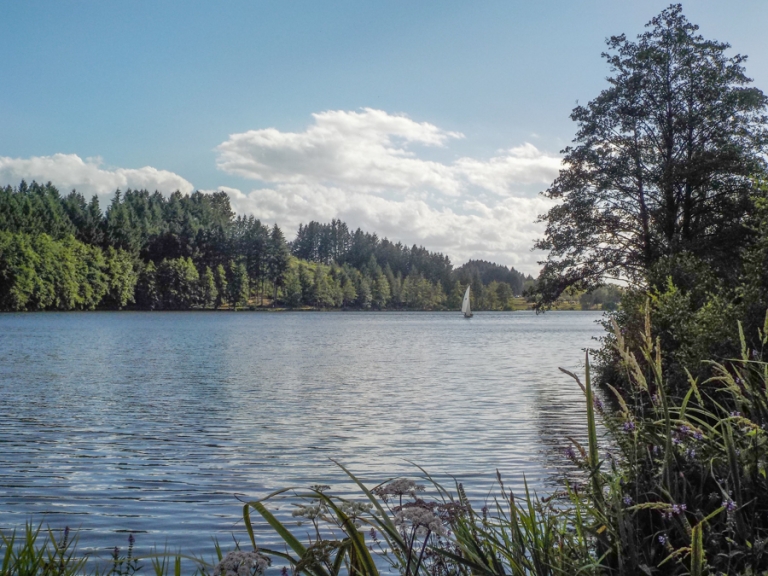 Les cascades, which translates to ‘The Waterfalls’ is about 40 minutes north of Lyon in the small, riverside town of Trevoux. It is a municipal pool, attached to a campsite.

On 2.5 hectares of land, it offers several slides and pools as well as grass to sunbathe, picnic, ping-pong tables and volleyball nets. They also have a snack bar which sells chips, hotdogs and crisps etc and you can rent parasols and sun chairs as well.

How Much Does It Cost

The entrance fee was €8.50 for adults and €5.50 for children, under 2’s being free.  They accept cash or card payments and in return, you’re presented with wristbands that are compulsory to wear.

The pools are open between July and September.

Despite asking for 2 adults and 3 children, we were charged for 3 adults and 2 children and when I complained I was told there was nothing they could do because the transaction had already been completed. I paid by card rather than cash though.

Unlike most French pools you’re not required to wear a swimming cap however you must not wear board shorts or burkinis or anything long!

Yes, the French are obsessed with their rules and budgie smugglers!

Security Around The Pool

The pools are patrolled by a range of lifeguards AND security men. We are not entirely sure why but somebody mentioned that there had been problems among Arabic youths. Given how racism is prevalent in France though, this might not be true.

Videos Of Our Time There

There are a number of pools and slides all varying in-depth, including a toboggan slide, a swirly slide, a deep pool, a water jet pool that pushes you round in a circle and a baby and small child pool.

The toboggan slide was a big hit but not the favourite. That went to the wavy slide.I have no idea how many goes he had on this slide, in excess of twenty for sure!

I think we can all assume we had a great time here and it was a fab way to spend the boy’s birthday 🙂  He was so tired by 4 pm he had a little nap on the grass.

Spread the love
5
Shares
5
Shares
Posted in France
« Beaches near Agadir Morocco which we can recommend
On the road: Being vegan in Madeira »