Do you ever open your mouth and find yourself agreeing with something your kids say before your brain has had a chance to catch up? This is what happened here! As we were walking close to the bridge to find the ruins of Sao Jorge, our son said to me “Mum, these cobbled pathways look so old I bet they’re Roman. They look Roman, don’t they!?” and before my brain had a chance to think I said ‘YES!’  Anyway, a few white lies didn’t hurt (at that point) and it encouraged them to complete the steep walk up the hillside. We used research on Google later to cushion the blow that the ruins are NOT roman but in fact 16th century. Woops, just a few years out then. 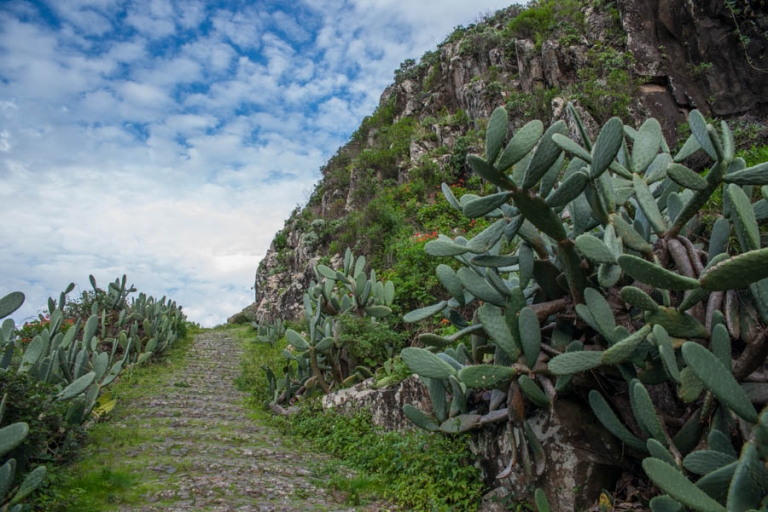 Cobbled pathways leading up the valley.

The ruins of Sao Jorge are on the north-east side of the island, close to Santana. They are not shown or listed on the tourist map and I should imagine that was deliberate to keep the coach tours away. In fact these ruins aren’t even mentioned in Madeira’s official book that it sells in all the supermarkets.

The area is popular with locals in the summer due to the newly built restaurant-pools and with hikers all year round.  The Vereda do Calhau walk – which is on the left side of the mountain as you cross the bridge, is a very popular and floral walk.

From the very top viewing point of Sao Jorge you can look down the mountain side and see the calhau swimming pools and the zig-zag tracks up the hillside. 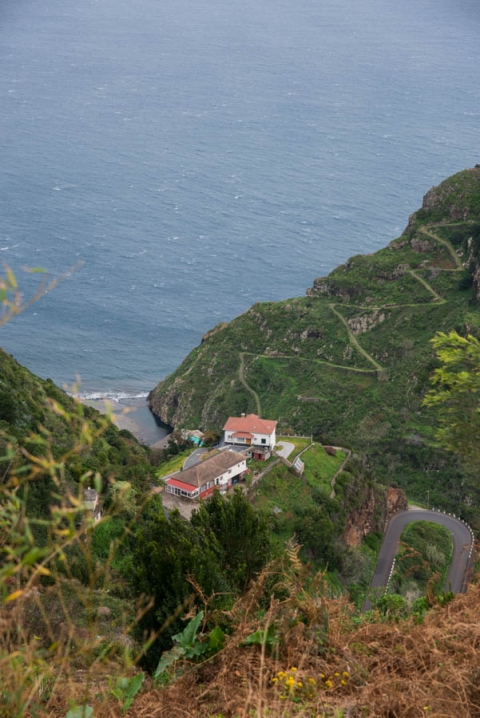 You can just see a glimmer of blue from the pool at the bottom of the valley. The zig-zag track is prominent. Don’t be fooled by how easy it looks lol.


A Little History Of Sao Jorge

It’s been quite difficult to find out exactly what these ruins are and when they date back to but my understanding now is that they date to 1515 and belonged to an old sugarcane mill that was built there in the early days of the settlement. It was operational between the 16th-20th centuries.

The entrance portico is one of the most significant elements of the ancient buildings and was classified as a Monument of Municipal Interest in 2003. 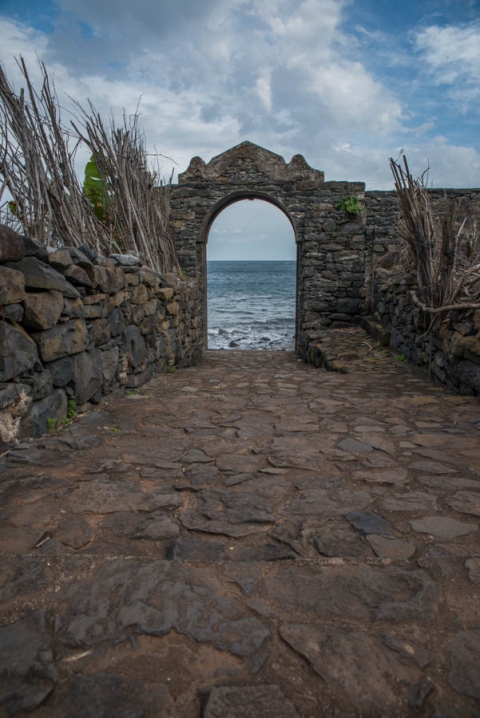 Portway door leading out onto the stone beach

The Sao Jorge ruins are described as being by the ‘calhau’ which I originally perceived to mean by the mouth of the river however it actually means ‘pebble’.  So Calhau de Sao Jorge means Saint George’s pebble.  Maybe relevant to the stoniness of the beach? I will try and find out.

The ruins came about in the 20th century when the building of the new road gave an end to the monopoly of Sao Jorge. The place started to decay, since it ceased being a compulsory passing place.

No Signs Or Information

I was driving past the road entrance when I saw a road sign ‘Ruinas’. We decided to explore what I guessed was going to be ruins. Arriving in the car park you can see the bridge and the beach but there’s no real indication as to what to what these ruins are.

There are no information signs at all. Due to this, we missed a number of the ruins which are located on the other side of the beach to the Portico.

I have no idea if the buildings below are part of the ruins or if they form some tourist hostel or something which is only open in the summer? 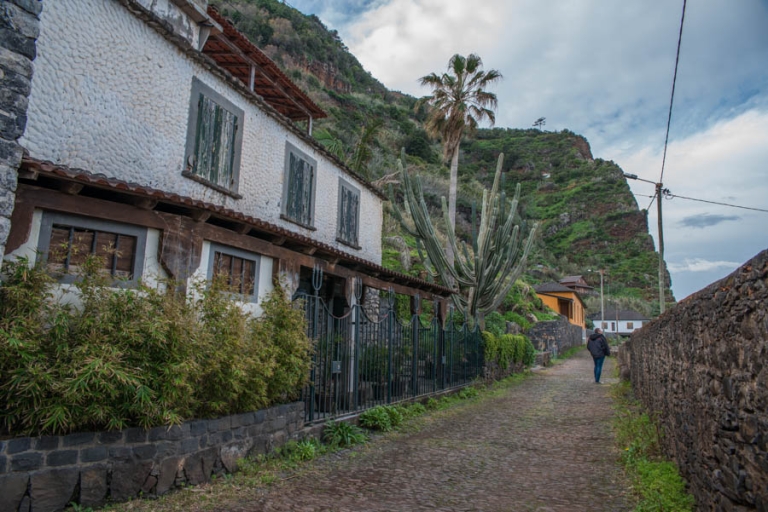 One of the old roads

The old bridge leads to the modern cafe and pools and takes you up on the zig-zag path that leads up one side of the valley. 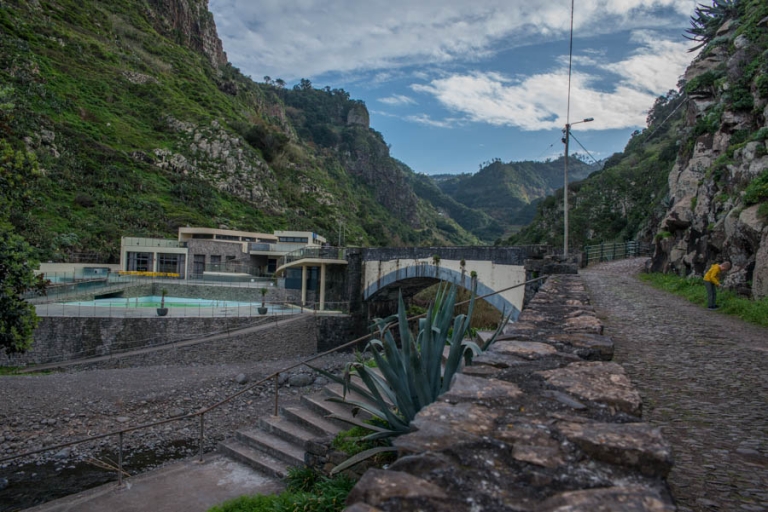 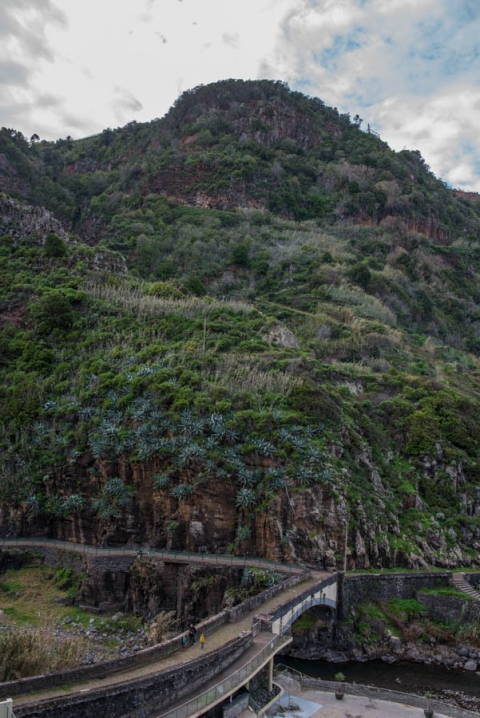 The Portico leads out onto a stoney beach and what is described as a perilous beach.. I’m guessing one shouldn’t swim here then? Although there are no signs. 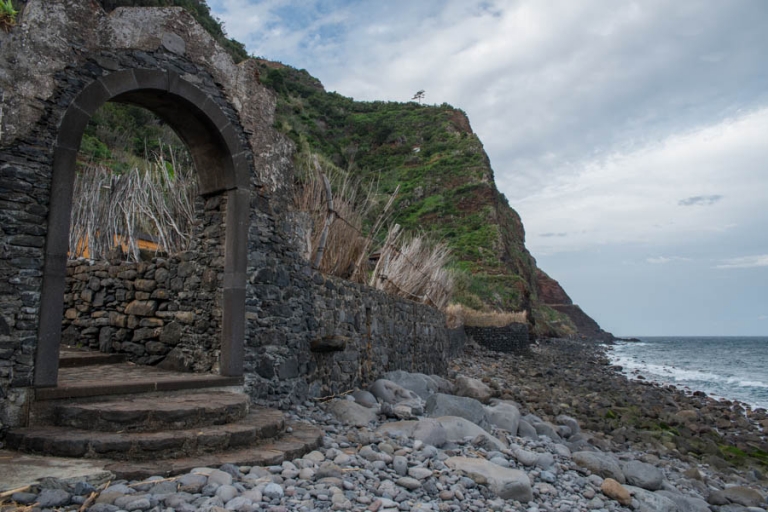 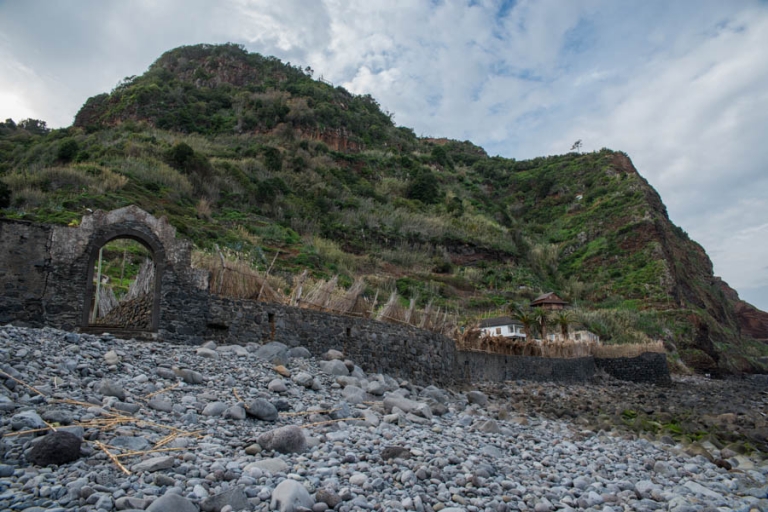 The portico and old wall from the beach 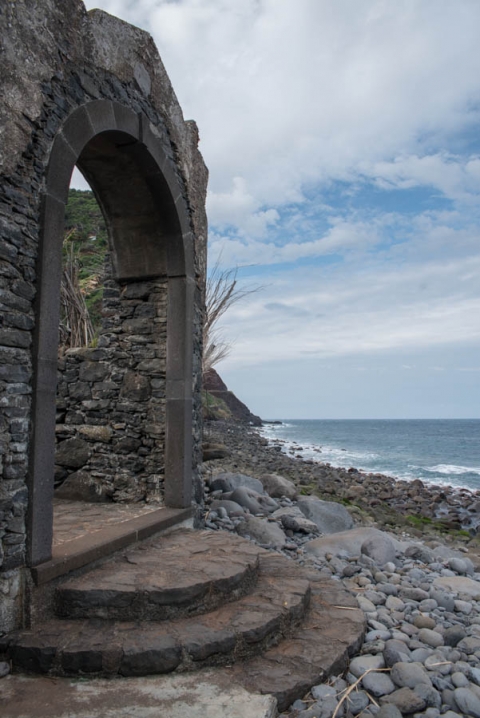 The portico of Sao Jorge and the rocky beach

The Ruins of the Old Mill, Warehouse & Fountain.

Since coming back from the ruins and trying to research them, I discovered that there there is a mill, warehouse and fountain. Obviously I have no photos of these as I didn’t see them as I was on the beach. 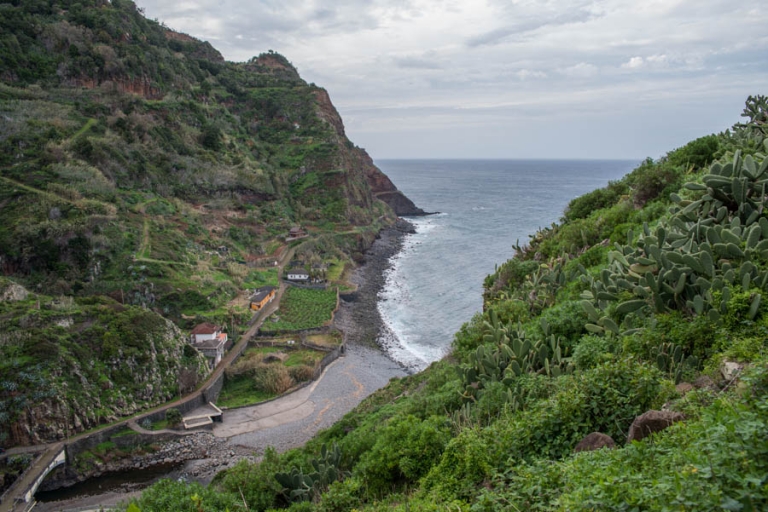 The ruins from above 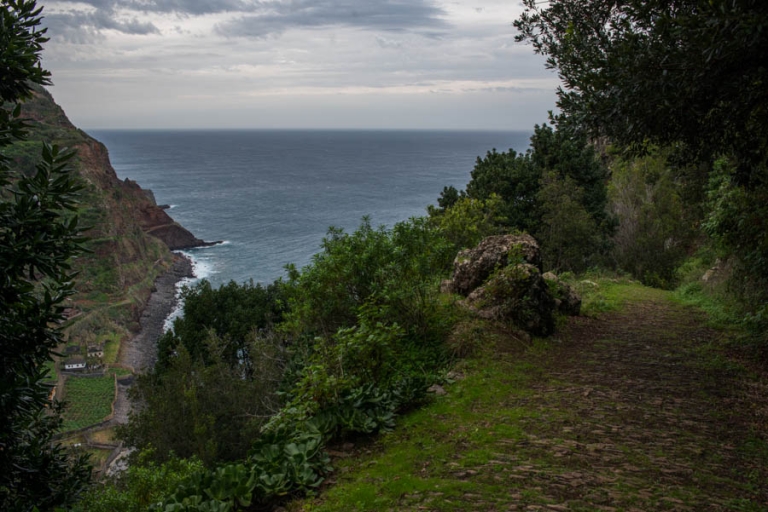 Ruins from above on the zig-zag path


The Walk Up The Hill

The walk probably isn’t very long, maybe 1km, but it’s quite steep. Because we didn’t know it existed, we walked up in Ugg boots and trainers. Not the best choice of footwear for walking!

The pathway is lined with cactus and flowering plants. I now know that this walk was optimistically called “The Royal Road” and although no cars would have passed it, it would have been used by pedestrians and oxen driven carts. This road was more than likely the only access route between villages but the main means of transport would have been to use the boats and the dangerous harbour of Sao Jorge. 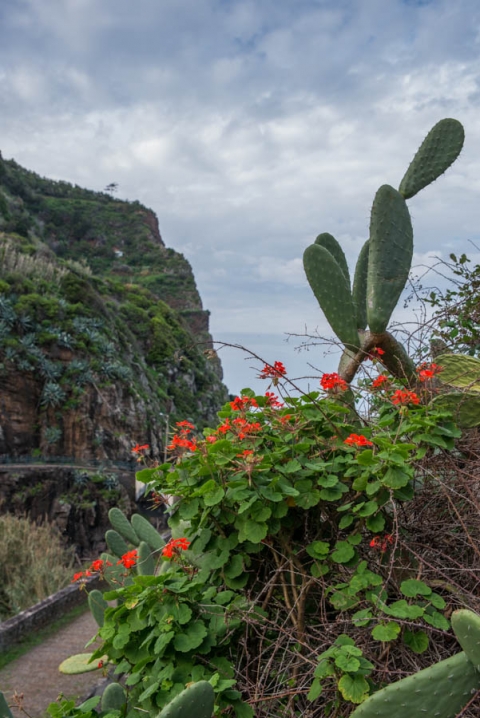 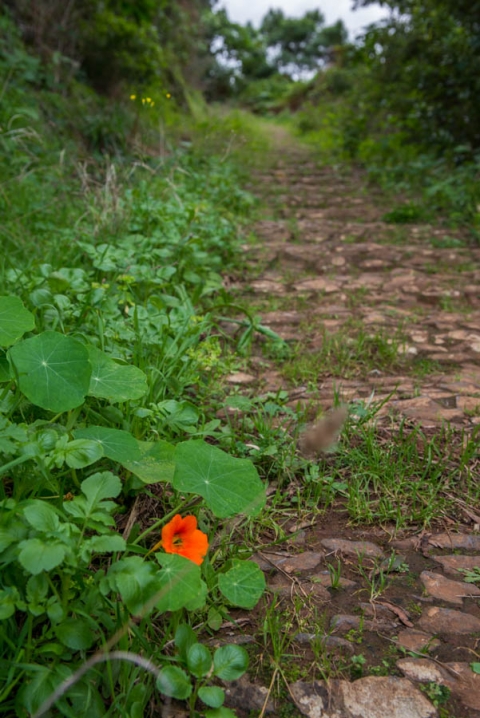 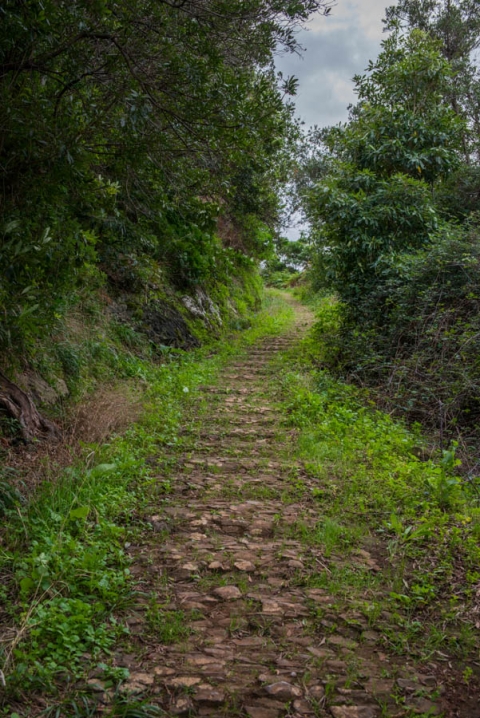 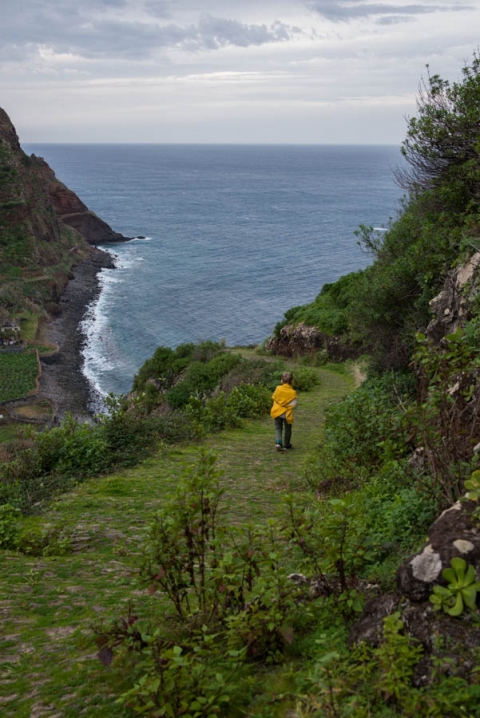 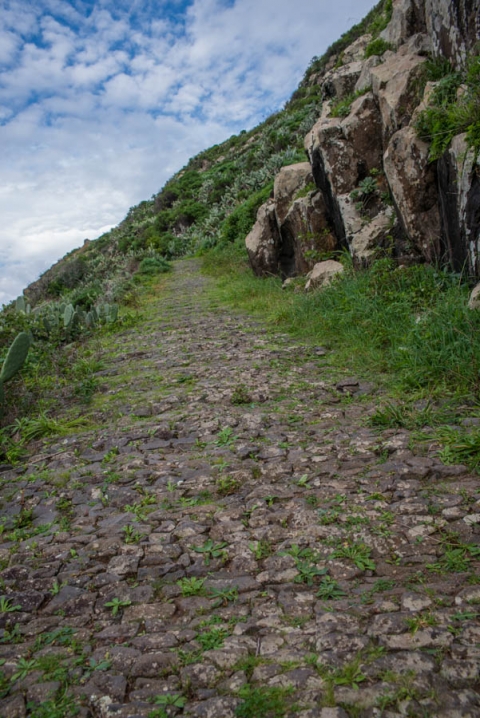 Waterfalls On The Walk

Like everywhere on Madeira, water is plentiful and there are a number of waterfalls you’re able to see. 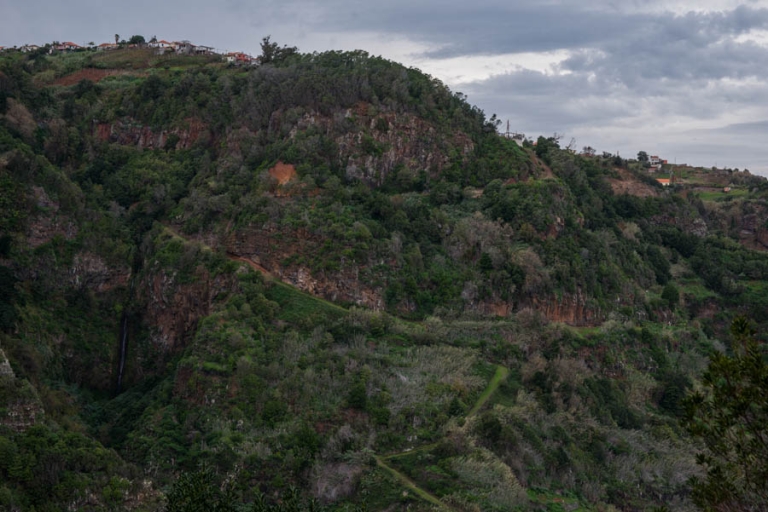 A waterfall in the left hand corner

The Beach Of Sao Jorge

The beach is a stone beach full of boulders. I have read reports since that the swell is very large and that swimming is strongly discouraged, although there are no apparent  signs on the beach. 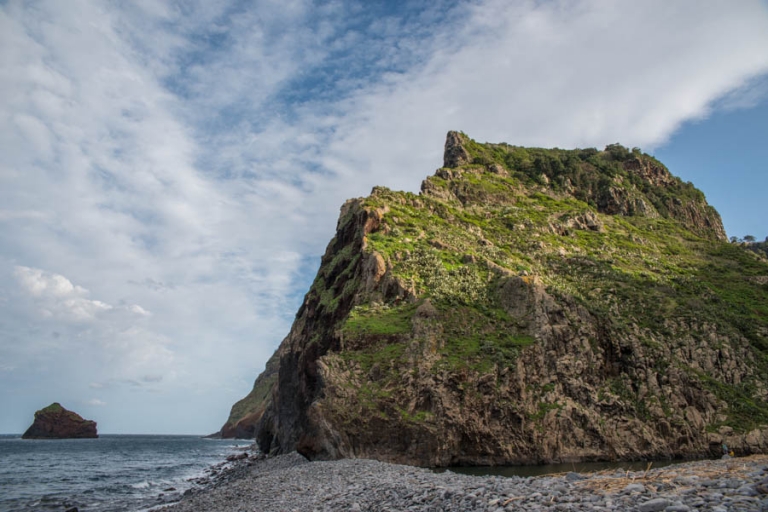 The natural pool is 5m deep and fed by the river.  In the summer it must be lovely and the kids had a great time throwing rocks into it, although we visited Madeira in January and were not brave enough to swim. 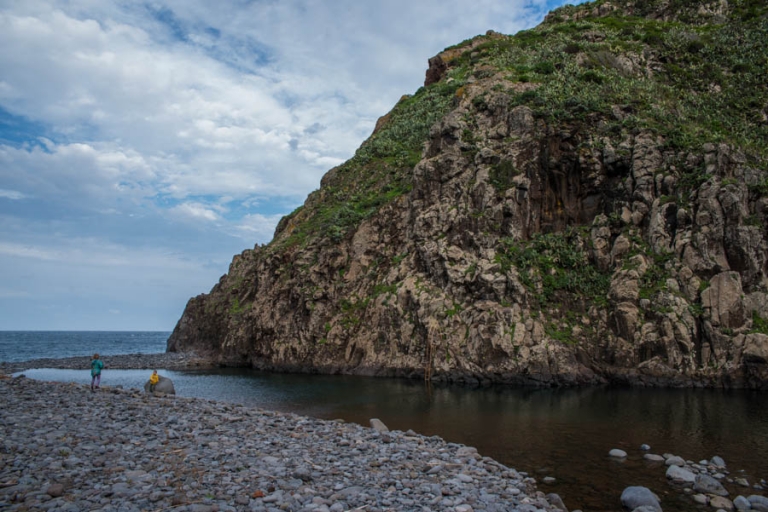 The natural pools at the Sao Jorge ruins 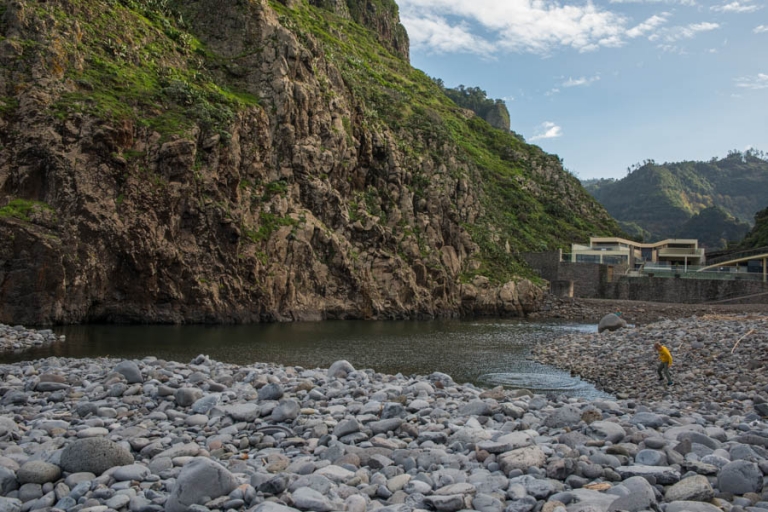 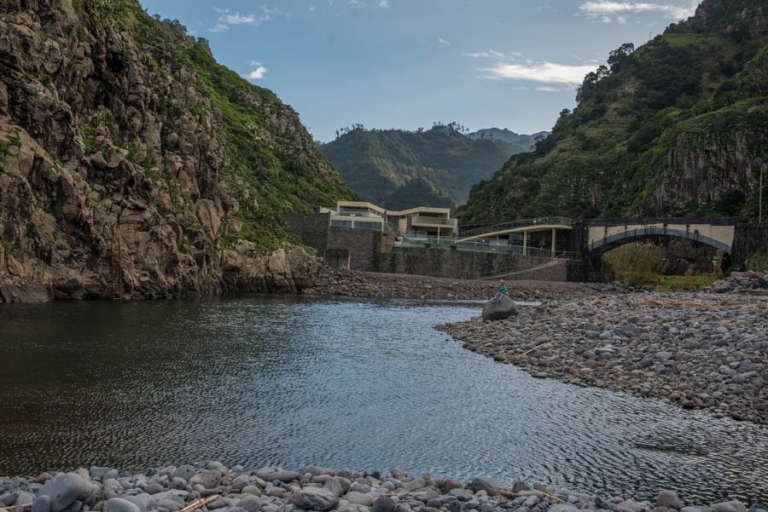 The natural pool and the C16th bridge in the background

The Cafe and Pools

Sadly not open during the winter but they look fabulous! 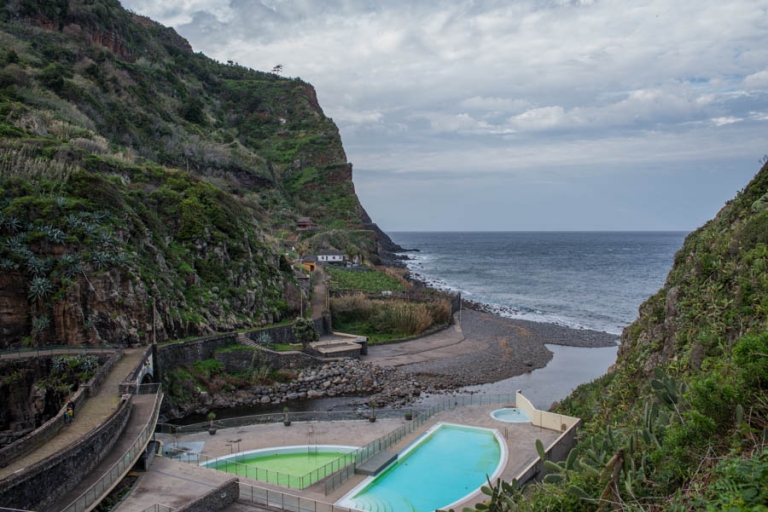 The pools and cafe/restaurant from above

I’ve seen photos (courtesy of google) of the cafe and pools in use during the summer and they look turquoise, glistening in the sun and full of people. Much better condition than they are now in winter.

Feeling Underwhelmed By A Lack Of Information

I left the ruins feeling totally underwhelmed; I had NO idea what the ruins were, what century they were from or how important they were to the island’s history.

In total we spent five weeks on Madeira and reflecting back I seem to have felt underwhelmed by much due to a total lack of information. Google has been useful but it hasn’t answered all my questions.