Have you thought about going on a Costa Rica Night Tours & Walks with Kids? Here’s why you should definitely do one and take your kids too.

The jungle at night is a sensory overload

At night the jungle takes on an entirely different character! Costa Rica’s jungles are steaming hot, it’ll probably be raining too and pitch black. The noise is almost deafening. It’s hard to believe it but the jungles at night are incredibly noisy with sounds from everything from monkeys down to mosquitos. It’s a wonderful experience that will engulf you and inspire your kids to find out more.

More than 60% of the wildlife found in Costa Rica’s  tropical rainforests is nocturnal. Therefore there’s statistically more chance of you seeing wildlife on a night tour than during the day.

Even if you’re not a big fan of super-large critters you can’t help but be a little impressed that these animals are masters of their own environments.

Your guide will show you all the best places to look

Try and choose a local guide over a hotel guide as the local guides tend to be more qualified and experienced. It’s common to discover local guides having PhD’s or significant post qualifying experience.

We did three night-time tours and our weakest experience was with a hotel tour guide. He was enthusiastic but many of his facts were wrong and some sensationalised, possibly for the tourist market.

And they’ll have powerful monoculars you can use

So what might you see in the jungles of Costa Rica at night?

How many frogs can you see?

The most prevalent frog is the red-eyed green tree frog, you may see one during the day curled up under a leaf but at night they really come out in force with a very recognisable sound. You might also hear the high pitches of a Glass Frog but it’s so tiny, it’d be remarkable to find one. The Lemur Leaf Frog might be visible and Poison Dart Frogs are also a common frog but more likely to be seen on the ground, under leaves. I’m not entirely sure I’m brave enough to go rummaging around under leaves on the forest floor after darkness! And for one very good reason.

If you see frogs, you may get to see a snake or two

Eyelash vipers are a type of pit viper found in Costa Rica and we were fortunate enough to see these recently hatched juvenile, tree dwellers. Known for their alluring eyelashes they’re also well-known for aggression and lightning fast strikes. These are arboreal snakes meaning they spend their lives in trees, palms, shrubs and vines and they usually prefer to stay near a permanent water source.

​The Eyelash viper, like all pit vipers, possesses heat sensitive organs, called pits, located on either side of the head and between the eyes and nostrils, meaning they can sense you coming long before you’ve seen them. Fortunately they’re way more scared of you than you are of them.

These pit organs are complex structures that allow them to find potential prey by sensing body heat, a great evolutionary adaptation to a predator that hunts mainly at night.  They use the sit and wait technique which is great for night tours as you’re most likely to find them sitting in trees, waiting for prey to wander into their territory.

We were also privileged enough to nearly trip over Costa Rica’s most venomous snake, another pit viper called the fer-de-lance.  Strangely however within the countries it inhabits the name fer-de-lance isn’t widely used.

Among common names are terciopelo (velvet in Spanish), barba amarilla (yellow beard) in Guatemala & Honduras, taya equis in Colombia, cuaima in Venezuela, equis in Ecuador & Panama and nauyaca in Mexico. Probably the strangest name is “yellow-jawed tommygoff” used in Belize, the only English-speaking country in Central America.

The fer-de-lance has a broad, flattened, triangular-shaped head and has a distinct diamond pattern.  Here it can be seen in hunting posture, waiting for prey and not at all interested in us.  This snake was quite small and we estimated it was a juvenile male because of its size. They are territorial creatures and can often be found returning to the same areas to hunt. This one was by the side of a path and they’re unlikely to strike humans due to their size. Instead they flail about aggressively by swelling up and striking about.

Following this pseudo-macho display, they normally move off into the bush however, naturalists beware of another intriguing behavior. They often crawl a short distance, stop in a concealed place and then turn to face their foe. An unknowing person who wishes to get a better look may follow the path of movement and quickly receive a strike or two from a defensive snake.

This other unidentified snake which could be a Brown Spot Belly Snake or a Racer Snake was seen at the bottom of a disused pool. It had probably entered looking for frogs and was unable to get out. The Masked Tree Frog sitting on top of it is more than likely male due to its size and just sitting there rather than eating it.

What will you need to take on a jungle night tour?

What Tours Do We recommend?

If you’re considering a night tour with your kids, you can add this to Pinterest using this image. 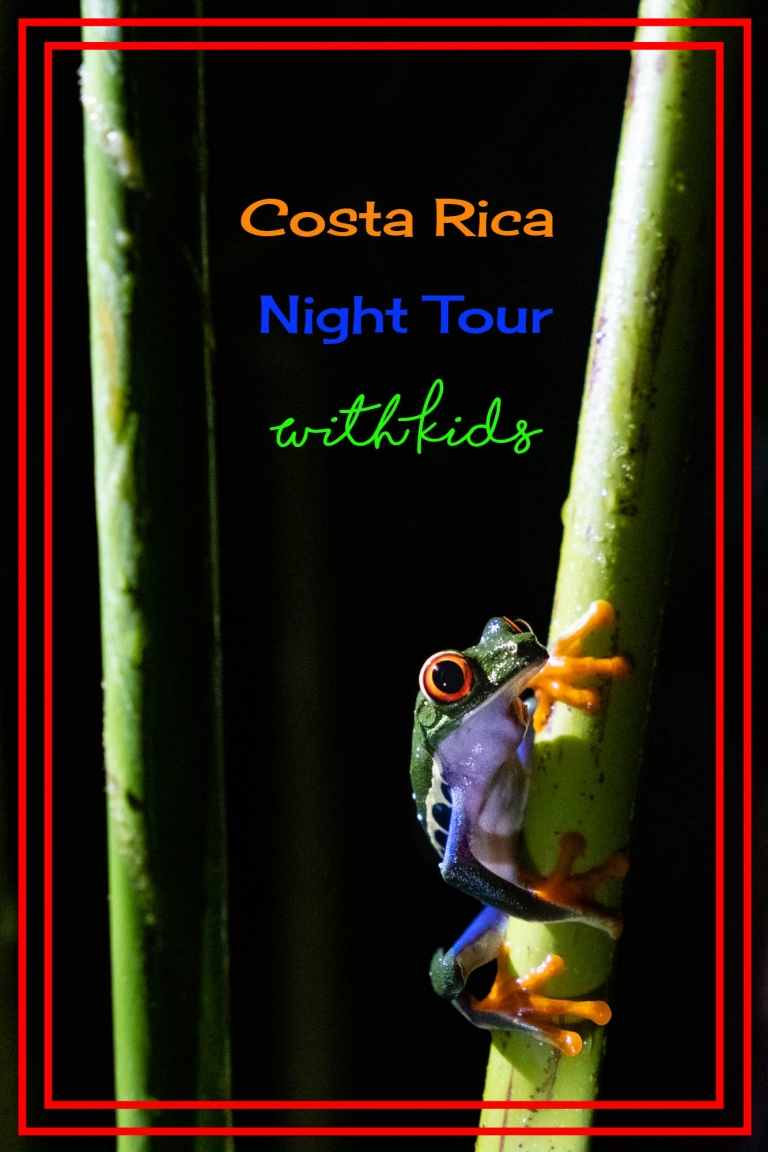 What else could you do in Costa Rica?

Spread the love
Posted in Costa Rica
« Which Jordan tourist SIM card should you get?
Should I take my kids to Sumatra? What to know about travelling there »