The Karnak Temple In Luxor And Visiting With Kids

We chose to visit Karnak Temple instead of Luxor Temple and felt this was the better option for kids who might have seen just one too many temples!  If you’re visiting Luxor with children and looking for child-friendly temples, we would definitely recommend Karnak Temple and hope to show you why with these photos.

Luxor is divided in two by the Nile. On the east bank sits the main city of Luxor with the two temples; Luxor and Karnak Temple and on the west bank sits the valley of the kings and queens.

Luxor is situated to the south of the city whilst Karnak is slightly further to the north. Karnak Temple is a much bigger complex than Luxor Temple and thus there’s much more to see, however, there are also more people.

Travel Egypt safely with a Revolut card. Have ultimate control over it and get free cash withdrawals

How Much Are Tickets To Karnak?

Tickets to Karnak were 200 EG£ but these are obviously subject to change.

When Should You Visit?

Karnak opens at 6 am and the coach tours tend to start arriving at about 11 am. The coaches leave at roughly 3 pm to make it back over to the coast. Sunset starts around 5 pm and you can see the sandstone glow a vivid orange in the setting sun until the complex closes at 5:30 pm.

Luxor gets very hot during midday so if you can start early, I’d recommend it.

We pre-booked all of our accommodation. You can get free quotes using the search box below.

The Downside Of Visiting Karnak Temple

The downside of visiting Karnak is definitely the number of coach parties that visit from Hurghada. Because they’ve been in a resort they’re often not aware of Egyptian customs and their behaviour was definitely on the raucous side.

However, four coaches arrived and left at the same time and once they’d gone Karnak was virtually deserted. I guess it’s just a matter of timing.

Will You Be Harassed?

I found Egypt particularly challenging to travel and by the time we reached Luxor my bullshit-o-meter was reaching catastrophic limits. I’ve written about our frustrations here but it really culminated in me wanting to sit in a corner, covering my head with my arms whilst stamping my legs and shouting ‘just leave me alone‘.

So, I am happy to report that although the entrance to Karnak Temple is busy with stalls and guides all touting for your attention, once you’re inside the complex there was no harassment. Phew!

A Brief History of Karnak

The temple of Karnak is located in the ancient city of Thebes and its original design was to house the god Amun along with his wife Mut and son Khonsu. It was originally founded in 2055 BC by the Pharaoh Senusret I, however, building on the temple continued for over 2,000 years throughout the history of Ancient Egypt with around 30 different pharaohs each adding to the construction of the temples.

The Karnak complex is a vast site (with little shade) that covers more than 1.5 square kilometres.  It is the largest religious building ever constructed and the second most visited historical site in Egypt; only the Giza Pyramids receive more visits.

The area of Amun is sixty-one acres and the great temple at the heart of Karnak is so big that St Peter’s, Milan and Notre Dame Cathedrals would fit within its walls. The Hypostyle hall stands at 54,000 square feet (16,459 meters) and features 134 columns. In addition to the main sanctuary there are several smaller temples and a sacred lake – 423 feet by 252 feet (129 by 77 meters).

A Map Of Karnak Temples

You could just wander around, snaking yourself between the columns and the rooms quite happily just soaking up the majestic design and structure. Alternatively, you could plan your visit or hire a guide.

It’s such a huge area that unless you allocated an entire day, I doubt you’d be able to see everything.

What Should You See There?

If you’re visiting with children, what should you prioritise seeing?

You enter the complex through a procession, flanked on both sides by ram-headed sphinxes. These once ran all the way to Karnak from Luxor Temple but have been raided throughout the years.

The Great Temple of Amun is Karnak’s main temple building and the shape of the temple you see before you now is mostly due to Pharaoh Tuthmosis I, who made Thebes capital of the New Kingdom.

The Kiosk of Sesostris I is one of the oldest structures in the whole temple complex. Built of fine limestone, it was erected to commemorate the King’s Jubilee. The roof has 24 pillars.

The Temple of Ptah, tutelary god of Memphis, was built by Tuthmosis III and enlarged and restored by the Ethiopian ruler Shabaka and some of the Ptolemies. Numerous colums, passageways, staircases and altar bases.

The badly ruined Temple of Ramses II is built on the same axis as the principal temple. The entrance doorway, on the east side, leads into a hall with two pillars.

North of these structures are the remains of another Temple of Ramses II, perhaps dedicated to the cult of King Mentuhotep III (11th Dynasty), which was restored in the time of Ptolemies.

As you make your way into the central part of Karnak, you will pass through the fourth and fifth pylons into the inner sanctuary. Behind Karnak’s main sanctuary is a structure known as the Akh-Menu, or Festival Hall of Thutmose III from the Eighteenth Dynasty. The columns are painted in red with bands of yellow and blue at the top.

Khonsu Temple is dedicated to the son in the Theban Triad: Khonsu. The Temple of Khonsu is the most complete element of the Karnak temple complex. American, French and Egyptian conservators have worked to remove the soot from the temple walls and ceilings, revealing stunning colours underneath. It is easy to forget that all of the walls at Karnak were once brightly painted.

The Sound & Light Show At Karnak

The sound and light show takes place after the sun has set. It takes 90 minutes to walk through the beautifully lit temple at night and recounts the history of Thebes and the lives of the many pharaohs who built here in honour of Amun.

You can book the light show below.

Other Things To Do In Luxor With Kids

Book Flights To Egypt With Skyscanner 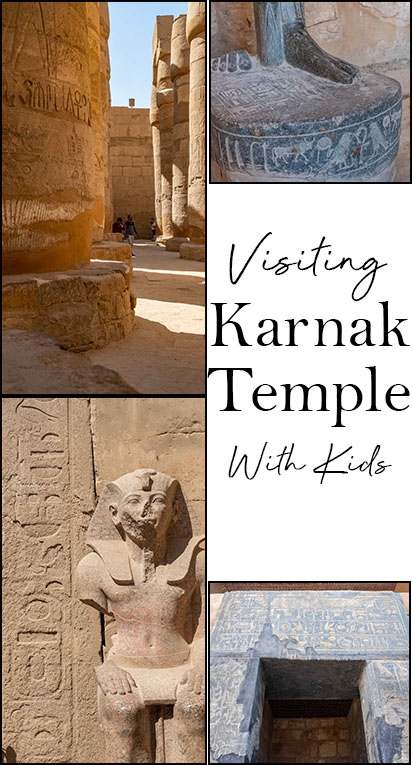 Other Things To Do In Egypt