Lyon is the self-described French city of gastronomy. I say self-described because from my perspective, unless you like sausages, it isn’t and if you’re vegetarian or even vegan, you’re going to be a bit short of choices! Let me explain why:

Lunch here is taken VERY seriously. I mean really seriously. You’re given a two hour lunch break and you’re expected to leave the building! Coming via Australia, this was a bit of a mystery to us. We’d got used to having a big and early breakfast, meeting up quickly at late elevenses for a coffee and then leaving work slightly early so we could catch the sun’s rays before bed.  Working in the UK, lunch was a poor affair whilst sat at your desk.  Well, not here!!

It is very common for people to eat out for lunch and Lyon is densely populated with restaurants. It has 1 restaurant for every 294 people. If you live in the 2nd arrondisement of Lyon, you’ll fare even better with 1 restaurant for every 137 people! This is great news…. if you’re a meat eater and if you want to eat between 12-2pm. Sadly not such good news if you’re not.

You see, French restaurants do these great things called ‘Formule‘; an inexpensive, set menu. The cheaper the menu the less choice you’ll get but sometimes for 15 euros you’ll get a set 3 course meal. For example, a starter (entrée) of foie gras, with a main dish (plat) of meat and then dessert (dessert) chocolate mousse or a plate of cheese.  Relatively cheap and simple but with no choice. You eat what you’re given.

I first started visiting France 25 years ago as a vegetarian. People had never heard of this before and of course whenever we ate out, I had to ask the chef for something else because there were no veggie options. It was great for my French and frequently the chefs were so excited to make me something not on the menu, however I’d say that there’s been virtually no progress since and in fact in Lyon they are positively hostile and resistant to any type of change. I have found no vegetarian option on any menus here and eating out has been a cauchemare (nightmare) for us.

Well that was until we caught wind of some vegetarian restaurants in Lyon!

Being vegan in Lyon is hard…. but not impossible!

Toutes les couleurs in based on the outskirts of the 1st arondissement of Lyon. There is virtually no parking as it is all street parking. Nearby parking and metro stations  of the Croix Rousse & Croix Paquet are not very close, and it’s situated on quite a high hill, but don’t worry because the walk makes it all the more worth while!  I think the restaurant itself can cater for non-able bodied needs but it is worth booking ahead to make sure.

What a beautiful little restaurant this is. Not only is it vegan it’s also bio (organic) and seasonal. Four of us ate a 2 course lunch each with drinks for 70 euros!!
The food was delicious. Fresh, local, seasonal and just divine!  For starter we had white asparagus soup, thai salad with wasabi jelly and a grain frisée. For main dish we had a huge sharing plate of raw vegetables, sprouted beans and peas, a hot spicy beetroot dish with brown rice and a sauerkraut type dish.  I forget exactly what we ate, which is terrible, but it was very tasty and fresh!

All the photos were taken with my phone, so please excuse the quality! I mentioned in a previous post how reluctant I am to take my camera out with me. As I was photographing our meals with my phone, the French people behind us (who were grossly untactful in true French form) started nudging each other and saying “Look she’s taking photos” “She’s taking photos of the food”, followed by the obligatory stares. This is why I don’t take my camera out with me!

You’ll need to check the opening times here because they are often only open for lunch and don’t open Sundays or Mondays. What I particularly like about this restaurant is that you have access to the kitchens, the chefs and you can see exactly what is going on. They’re happy to talk to you and answer your questions.  We had a vegetable on our sharing plate that I just couldn’t place. It was round, thinly sliced and yellow… it turns out it was “navet jaune” yellow turnip. I would never have guessed that.

Please excuse the grain in the photos, these were taken with my phone! 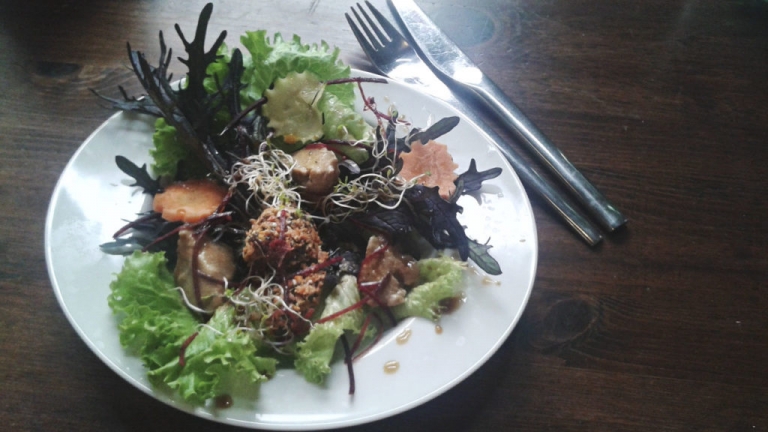 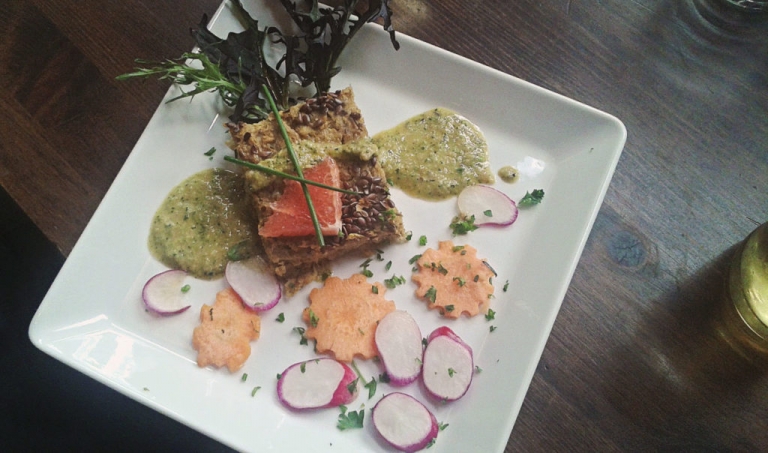 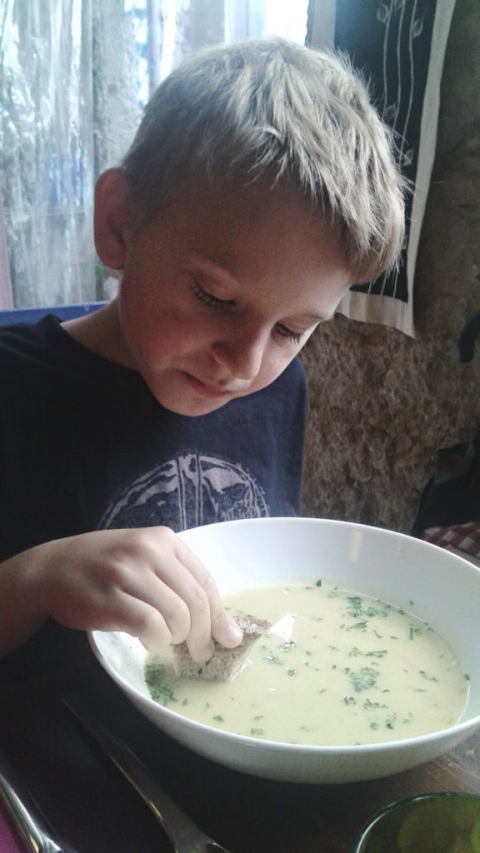 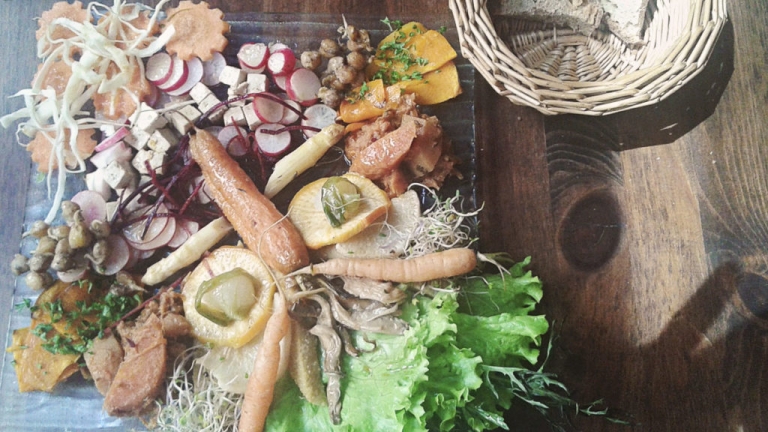 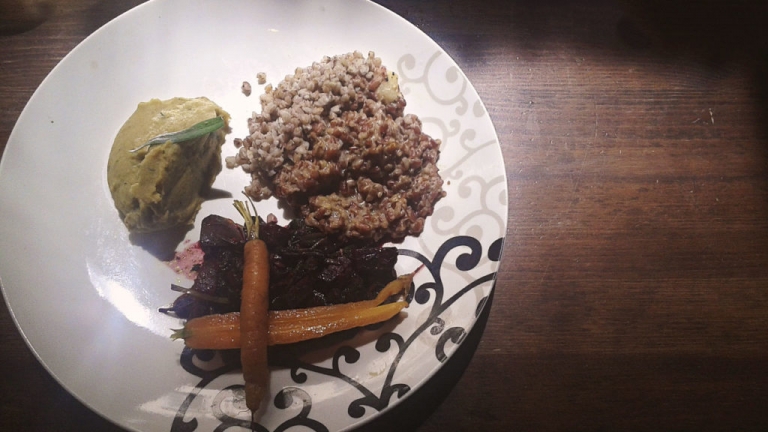 Color Vegan is a vegan pizza take-out based in the beautiful district of the Croix-Rousse. The 4th arondissement of Lyon is famous for its Silk Weavers and it’s hills!  Color Vegan is situated near the theatre and there is a car park in the square behind the shop, a very short distance away.

Color Vegan offers a take-out facility as well as a small area to dine in. The people working there are very friendly and they are multi-lingual. It prides itself on using only organic produce however I have some queries about this. One of the biggest hurdles vegans face (daily) is that most of us have absolutely no desire to eat anything that looks like meat. So, not only are meat and cheese substitutes unnecessary but they’re usually full of chemicals too. Just because it is vegan does NOT mean that it’s healthy. All the pizzas in Color Vegan contain some sort of meat and cheese substitute and as a result our pizzas tasted fake and plasticy.

For those of you who don’t know as a family we are refined sugar free, chemical free, processed free and meat free. I (Emma) am vegan, whilst Richard and the kids still eat farm raised eggs and mozzarella. We gave up sugar and chemicals/processed food nearly three years ago so it’s very easy for us to taste them in our food now.

We ordered three pizzas; rousse – ham substitute & mushroom, green – green lentil and rouge –red pepper.  The rousse smelled and tasted awful, almost like plastic. Our son ate one piece and proclaimed he felt so sick he couldn’t eat any more. He disappeared a short time later to the bathroom and then to his bed. The green had no taste what-so-ever. Bland wouldn’t even cover it. I couldn’t even taste the tomato base. The rouge was mediocre. You could taste the pepper but that was it.  The best part about the pizza was the whole, black olives dotted around.

All in all we were very disappointed and I HATE wasting food but we threw the majority of ours out. Three out of five of us felt really sick and went to bed early. I woke up with a terrible headache the next morning. 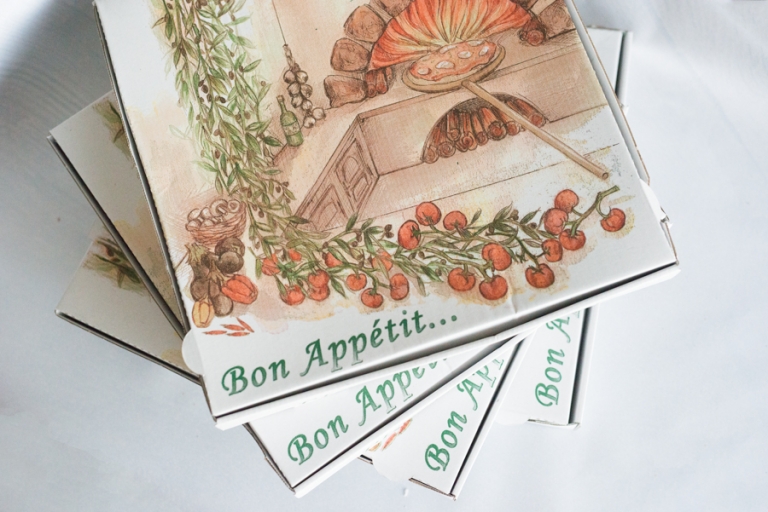 Being vegan in Lyon 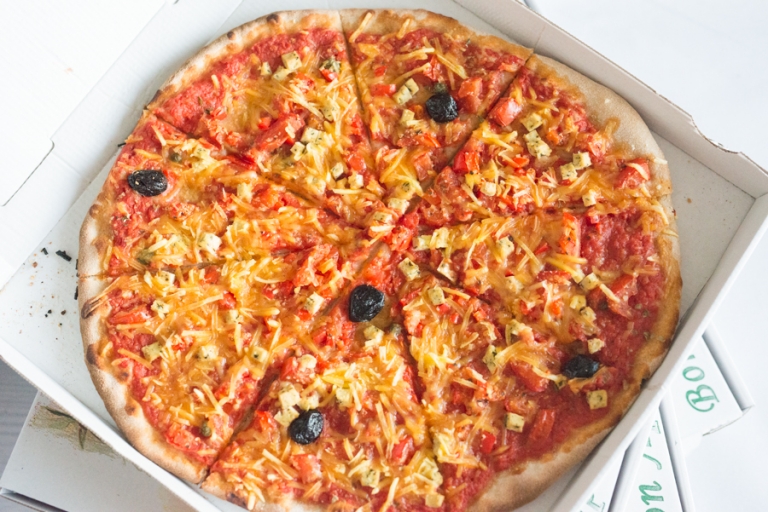 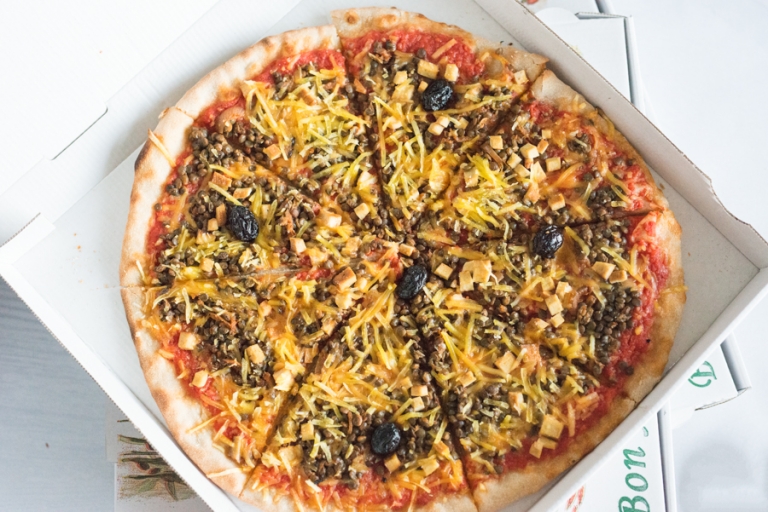 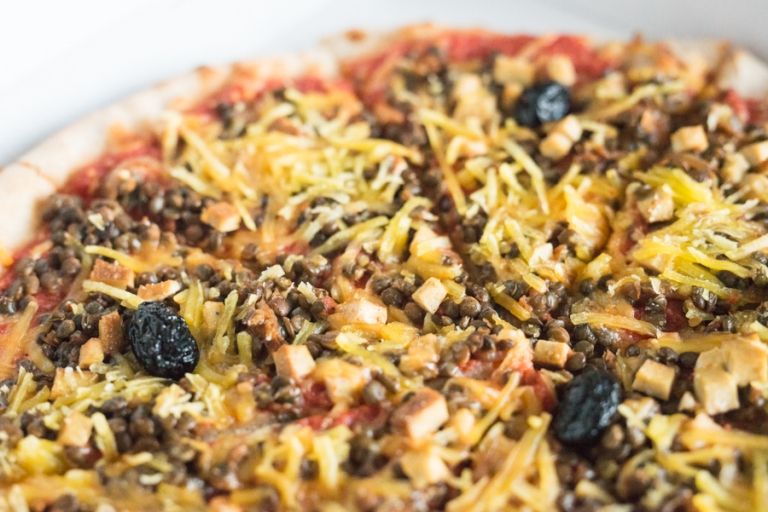 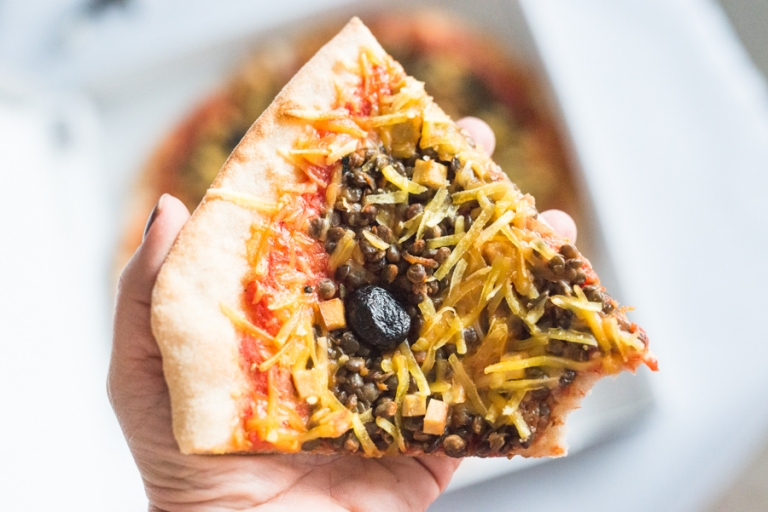 Cafe Vert is a teeny tiny little cafe in the Old Town of Lyon. Blink and you may miss it! It is next to Johnny’s Irish Pub. It is on the outskirts of the 5th and not one that you’d probably walk past without intention. 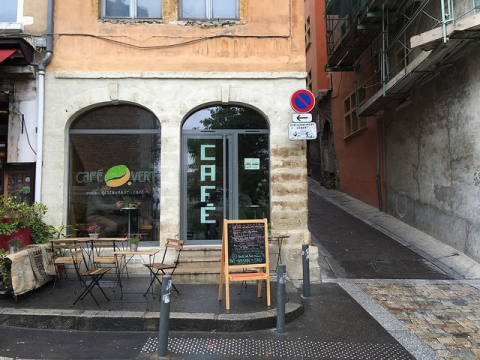 I found that it has a very limited menu comprising mostly of smoothies and soup and opening hours to match! However other people have clearly eaten full meals here and have photos to prove it, so I am unsure if you have to book to eat or not?

I took my children one afternoon, I guess they were shutting shortly as smoothies were limited to a choice of three. They were fresh were not blended enough and were lumpy. I think they were 6 euros each.

This is a vegetarian and vegan friendly restaurant with pescetarian choices too.

Le jardin interieur is tucked into a little back street in the 4th arrondisment of Lyon.  There is some parking locally on the streets but it’s very limited and you must pay 4 euros per 3 hours. It is much easier to catch the metro to the Croix Rousse and walk about 4 minutes.

Lyon’s 4th district is vibrant and sassy. It has an awesome market most days of the week, great shops and a spirited feel to it.

We visited le jardin interieur (French for inside garden) on a Saturday. It’s a small restaurant that can host about 30-40 people with upstairs and downstairs areas. They also have a children’s corner – which is very unusual for French restaurants. The restaurant is in a old, stone building but has a more modern feel with flowers and plants painted on the wall.  We were lucky to meet the owner who was working that day. She was helpful and explained items on the menu that we didn’t understand but she spoke very quickly and just repeated the same words again. I would suggest if your French is not great that you take an online translator.  They have tried to make the dishes sound more appertising by giving them unusual names. For example a soup was described as ‘a velvet of….’.

The menu is hand written for the day with icons for whether it is vegetarian, pescetarian or vegan. Make sure you do tell the staff that you’re vegan (vegetalliene) as there are quite a few dishes that contain butter, milk and cheese. 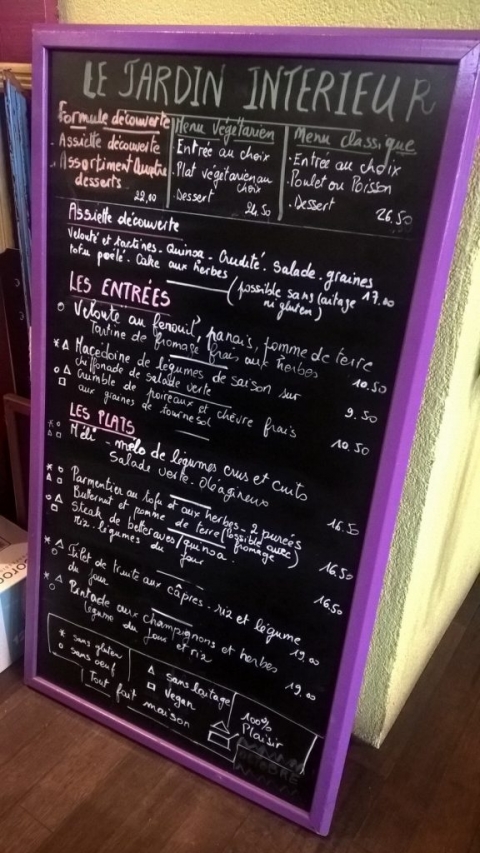 The menu the day we visited.

All the photos were taken with my phone, so please excuse the quality! I mentioned in a previous post how reluctant I am to take my camera out with me. This restaurant was no different and when people saw me taking photos, they turned around and stared at me.

We started with a sharing plate which included deep fried tofu, tapenade on toast, grated carrot and beetroot, cow’s cheese on bread, quinoa and hommous. 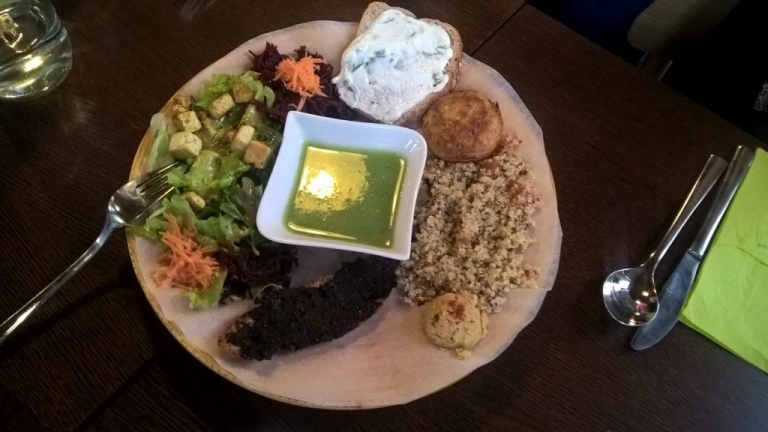 The main dishes were a good size but served on very old and mismatching plates and many had little cracks or chips.  My husband seemed to think that this was deliberate, in order to give it a more rustic and authentic feel. It was a bit strange. All the dishes were nice and tasty, clearly freshly made. I had a beetroot burger which was delicious. I wasn’t so impressed with the kids tofu pie but they ate it. 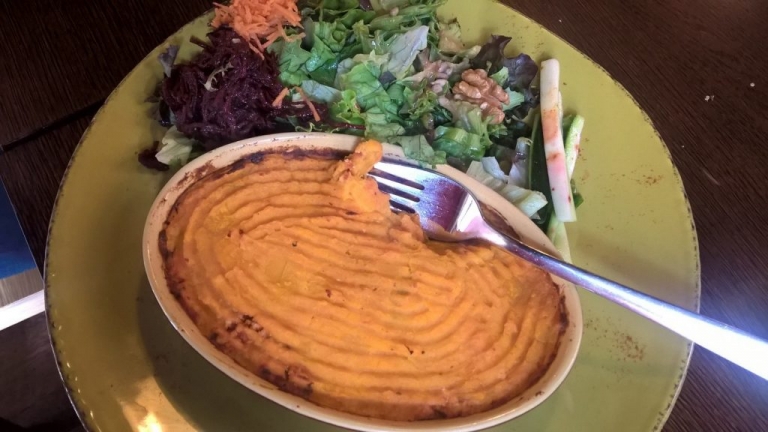 Parmentier of tofu and pureed potato and butternut squash 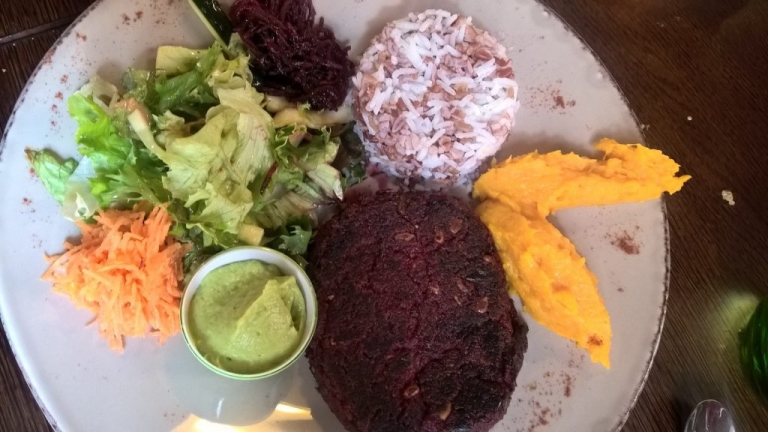 The kids had dessert of vegetarian chocolate fondant and vegan panna cotta. 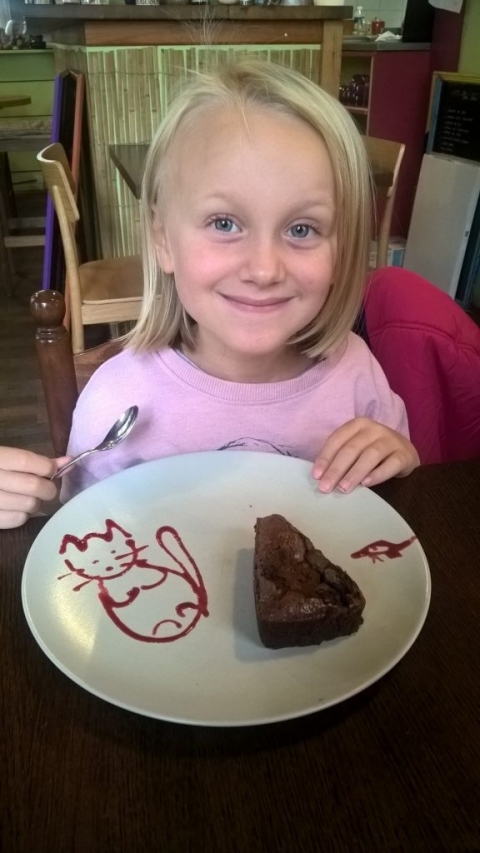 Nice presentation for the kids’ dessert. 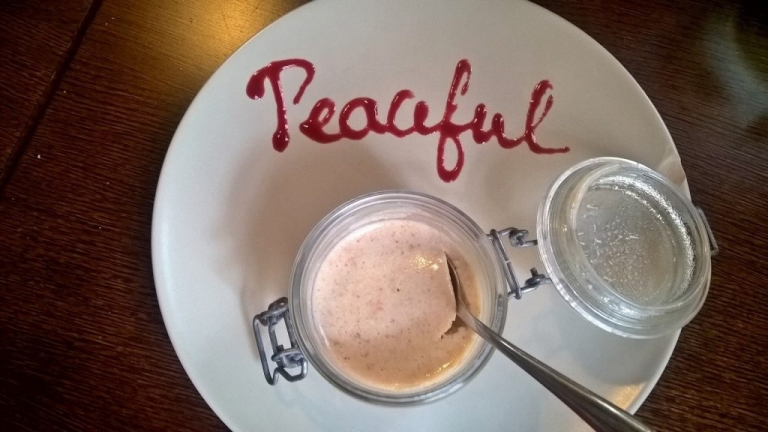 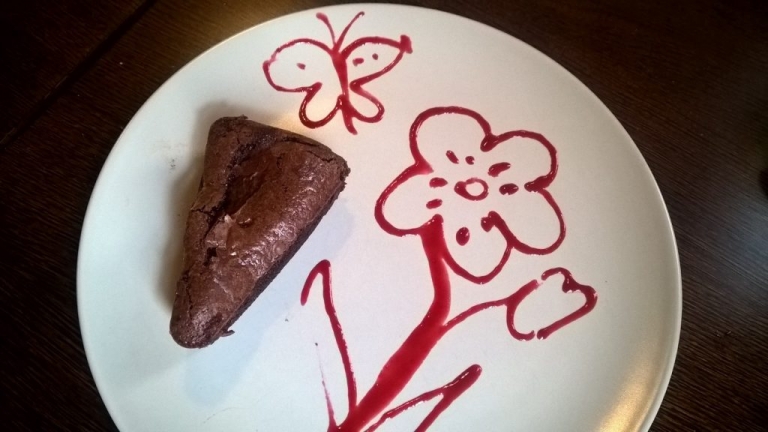 Pretty flowers for the chocolate fondant.

The service was good but they forgot my husband’s ‘summer cherry beer’ and there was mistake with our order – which could have been my French!

The cost was expensive. It came to 117 euros which for lunch is very excessive but the food was nice. Luckily we paid with our restaurant tickets. PHEW!!

Spread the love
Posted in France
« Avoiding animal cruelty whilst travelling
Preikestolen with kids: Hiking in the Rain »