“Snow shoeing!?! My husband repeated after me. He turned his nose up and said “It sounds a bit lame“. Good thing the kids didn’t think so! This post is about our trip to Abondance, French Alps and how we went winter hiking with snow shoes.

Despite living in Lyon for 2 years we never made it to The Alps. Plagued by a car that we could never drive, exorbitant rent & bills and a wardrobe that better suited our Australian lives, the beautiful mountains remained a distant view.

We had a bit of a shit time living in Lyon (it was a long 2 years) so when I suggested going back to France for a month I was met with four stoic faces, mouthfuls of hostility and a whole heap of resistance.

So I did what I felt was best; booked a house near Evian Les Bains (France) and told them it was Switzerland!! Everybody was happy.

Abondance (French alps) is one of many cute and quaint Swiss style villages sitting in the valley of a mountain. It is probably most famous for its Abbey and skiing but as we’re not religious and cannot ski (very well), we needed to find something else to do!

My biggest love is mountain hiking but unless we have a ton of gear (crampons and ice picks) hiking in the mountains in winter here is not going to happen so snow shoeing (winter snow hiking) is the next best thing.

At the end of March the sun warms the ground and there’s a faint buzz of insects and birds to be heard in the air. The lake is thawing slightly at the edges but there’s still 20-30cm of crunchy snow on the ground. Icicles drip and branches start to shake their winter coverings.

It’s not quite time for spring hikes so snow shoeing provides that perfect inbetweener activity. And don’t worry, it isn’t lame!

Snow shoeing is far less technical than skiing and pretty much anybody can do it. Although snow shoes used to look like strange tennis racquets tied randomly to feet they have progressed significantly in design and production.

Now-a-days they look more like mini, plastic versions of a snow board which fits loosely to the outside of the shoe or boot and is only fixed at the front. We wore our trainers because we didn’t bring our hiking boots and they were perfectly adequate although it is advisable to have shoe-wear that’s waterproof.

Snowshoes work by distributing your weight over a larger surface area so that the foot does not sink completely into the snow. My feet never got submerged but the snow was quite crisp and wasn’t too deep.

The temperature for us has been between 12-19*c. The sun is generally shining every day but the wind is strong and cold. You’ll need lots of layers to keep warm and definitely a waterproof jacket!

The day before we went to Abondance, we saw our first white tailed bumblebee in the woods and some butterflies had started to emerge too but the week after we had sleet and snow. Spring is difficult to predict in most European countries.

We met our guide, Cedric, in Abondance and we followed him up to Lac des Plagnes just a short drive away. Parking in the car park, we got booted and poled and started out in a procession of snow troopers.

If you want to book Cedric, you can email him on [email protected]

Here’s the route we took

We had an easy introduction and did a 4.6km winter hike, crossing flowing rivers, gliding down hills, looking for animal tracks and even seeing an igloo.

The route can be found here on MapMyHike.

Famous for being the most beautiful moutain lake of the Chablais region, Lac des Plagnes is 1200m in altitude and just 5km from the centre of Abondance.

It is a pretty lake mostly used by local fisherman in the summer time and is fed by a small waterfall. It is estimated to be about 20,000 years old.

When we went it was 95% frozen and had a shimmering of snow covering it and making it look like an ice rink.

Animal tracks are easy to spot, especially in fresh snow. We had snow ten days prior to our hike which meant they were harder to spot but still visible.

We saw clear deer and hare tracks but other tracks were less easily identifiable, like birds. We also saw squirrels in the forest but didn’t pick up their tracks.

Spotting Chamois on the mountains above Abondance, French Alps

High up above the lake, the mountains are starting to bloom. The snow is melting, the grass is reappearing and this makes it relatively easy to spot Chamois feasting on the green shoots.

A Chamois is a cross between a goat and an antelope and they travel in small herds. Using a monoscope we were able to see a few different groups of between three and five chamois.

They look small but more round than a goat and with long, backwards curved horns.

Can I ski in these?

Our son wanted to see if he could ski in his shoes, the answer is no BUT you can toboggan on your bottom. They thought this was brilliant fun.

I think Cedric had built this igloo himself and the kids decided they would go inside and explore it. I’m pretty sure they said it even had a fire inside it!

I decided that the entrance was far too narrow and that it would be decidedly too risky to try and squeeze through!

How to do this yourself

A brochure describing seven (100 km) snow-shoe trails throughout the Abondance valley is available at the tourist office and you can download it here : snowshoe trails

You’ll need to hire some snow shoes and they start at about €5 each. You can also buy them on eBay starting at roughly €40.

There are plenty of other snow shoe routes in the area. We found these around the Swiss Border: https://www.chatel.com/les-circuits-raquettes.html

See how easy you can add this to Pinterest 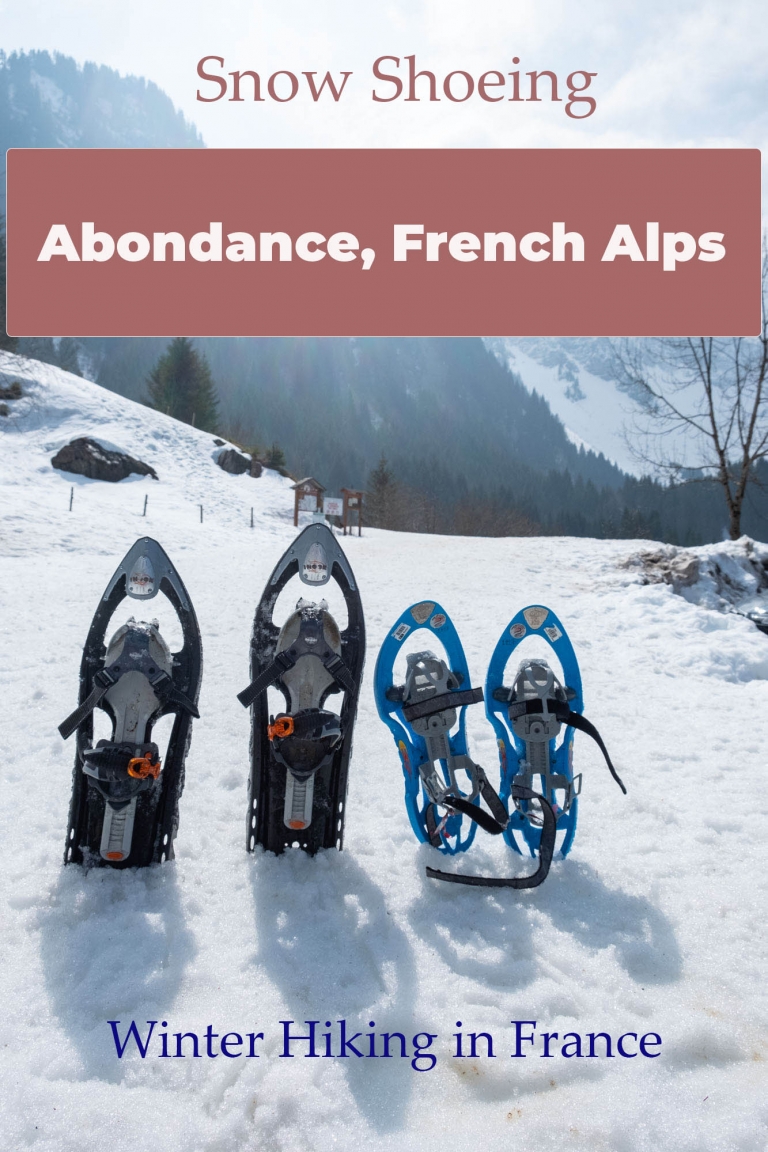 Stick around and see what else we’ve got up to

We’ve been living on the road since 2016, see if there’s some place we can inspire you to visit.

Spread the love
3
Shares
3
Shares
Posted in France
« Turtles, Fish & Reefs: Mahahual Eco Tours
The Back Door to Petra and How to Find It »