White lumps of icey snow, vague grey smudges of road and occasional green splashes of conifer trees peeking from their snowy caps is how I would best describe Haute-Savoie and its surrounds in early spring. As spring later appears, the sounds and sights change drastically to reveal orange and brown autumnal leaves scattered across forest floors and even frogspawn lies in the semi-frozen puddles thawing by the side of paths. If you’re looking for spring hikes near Lake Geneva, read on.

In order to get the most out of these hikes, I’d recommend having snow shoes. Even at the beginning of May some routes have thick snow and hiking through snow can be laborious and cold if you don’t have snow shoes.

See below for some of our recommendations on kit to take and wear in The Alps in spring.

Starting from the small village of Reyvroz, parking is opposite the church.

A short but steep (437m) ascent up Chemin de La Montagne onto this mountain gives way to spectacular views and if you have some sunshine it’s a brilliant place for a picnic. There is an alpage up there but it remains shut until summer.

This route should have no snow in late spring and for a harder hike you can elevate further up to Mont d’Hermone before cutting through the forest and returning down to the village.

In and around Lac de Fontaine are about six seperate hikes but depending on when you visit will determine just how much snow remains on the ground.

There are three car parks in the vecinity here. Although the road is signed as being closed until at least May you can drive through the barrier near La Revenette parking and choose to park higher up the road.

In early April the road was totally blocked by snow but by late April, early May it is possible to park closer to Lac Fontaine near Les Penots. The road up to Lac de Bise was still totally blocked with thick snow though in May.

The higher you go up into the mountains here the more chance you have of seeing Chamois.

Below is the first hike we managed in late March, parking low down at La Revenette. The road was nearly entirely covered in snow still and we only managed to walk up to Lac Fontaine.

Below is the second hike we did in mid April and where we saw over a hundred Chamois on the mountain side. This time we hiked up behind the lake and up to the Alpage. From here you can also hike over to Lac Dabonne.

Below is the third walk we did up to Lac de Bise, at the end of April, but the snow was still incredibly thick up there. You definitely need snow shoes for getting up there or even ventering into Les Cornettes de Bise.

Until June the road up to Lac Tanay will be closed so you will need to park in Flon parking. The question is, will you walk up the road or the goat trail through the woods up to Lac Tanay? Either way, you’re in for a butt kicking, calf pinching, thigh burning walk. Oh yes!

Lac Tanay remains frozen in spring and it’s up to you after arriving at Lac Tanay whether you continue hiking or stop at some of the restaurants for a bite to eat. Reminder; the restaurants are only open between Friday 16:00 and Sunday 18:00 in Spring but open full time during the holiday periods after May. I have seen some amazing photos of the lake in summer and I would love to stay in the accommodation up there.

Below is our first hike from Flon to Lac Tanay, which was in late March where there was thick snow of about a metre and the lake remained mostly frozen.

My favourite hike from Lac Tanay is up to Les Jumelles. It’s a little known hike and it isn’t signposted. If you want to go up to Les Jumelles, you can either follow ‘Grammont’ or go via La Combe. Either route you take will be a steep hike of 400m ascension and between 10-12km return to the car park.

The route below goes via Grammont, click here for the route going via La Combe.

Arriving at Grammont you’re at about 2000m and it is cold up there but you should see plenty of Chamois and birds of prey. We saw about fifty Chamois whilst we were up there and the views are spectacular.

If you fancy a short but steep walk through narrow tracked, pine forests with ginormous, scented trees that tower above you, this is the route for you.

My kids dubbed this ‘the circle on the circle route’ and promptly refused to do the second circle as we didn’t take any snowshoes and the snow looked ‘horrendously thick’, according to them.

This is the second least snowy of all the routes but if you want to do the second circle, you’ll need snow shoes. The second circle either takes you up to Tre La Paraz or Mont Forchat, it’s the strange spike that sits to the south of the route that we started. It is an extra 4km on top of the original 7km.

We started this hike, which straddles the Swiss border, in very early spring and the snow was still over a metre deep in parts which is a problem if you don’t have snow shoes.  You can see on the map below we only completed two of the four hills because we just couldn’t walk in such deep snow without sinking. We’ll be back at some point to finish it off.

This hike is supposed to start from Sevan Devant Parking but due to deep snow this car park was blocked and we were forced to park further down the road.

From Sevan Devant parking you should ascend to Le Col de Recon, Col de Braitaz, Col d’Outanne, Col de Sevan before descending to Sevan Derriere and back across to Sevan Devant.

How much do snowshoes cost?

Snowshoes cost between £5 and £80 but they’re necessary for hiking in The Alps in spring. You can check some of the prices here.

Other top tips on hiking

You can download all of these hikes by clicking the above maps and selecting the arrow icon or you can download the gpx files from our mapmyhike page. 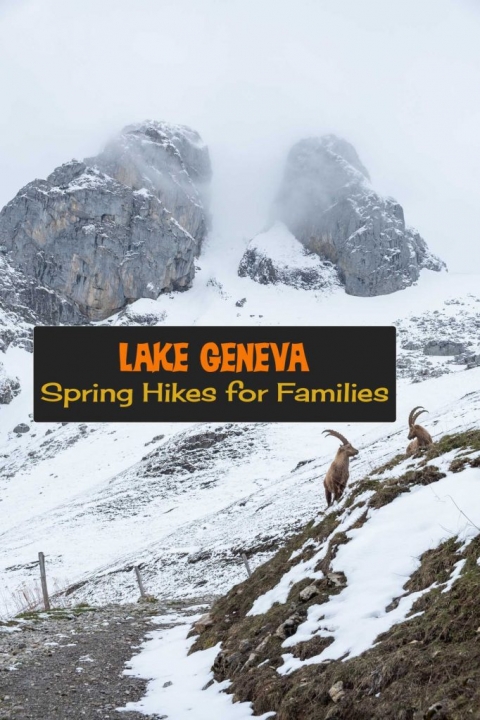 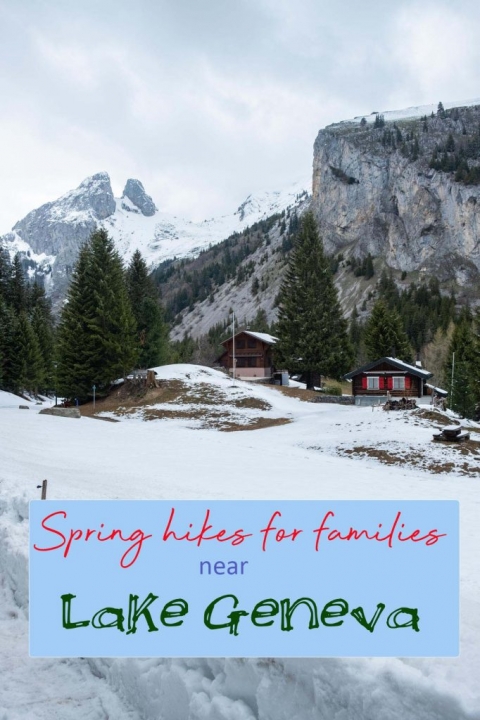 Did you like this post on spring hikes near Lake Geneva? Have a look at some of our other posts.

« Jordan itinerary for 7-10 days; Keeping kids in mindSo, you want to learn how to rock climb? You can with Lost Earth Adventures, Derbyshire »