Is Mevagissey The Most Picturesque Village In England?

Mevagissey is a quaint, typical Cornish port town in southern Cornwall and we want to know if it’s Britain’s most picturesque village? What do you think? If you’re looking for somewhere in Cornwall to stay, you should definitely consider Mevagissey.

The name Mevagissey is derived from the names of two saints, St Meva and St Issey. The first record of a hamlet in this name was in 1313, but there were local settlements in this vicinity during the Bronze Age. Two Bronze Age Burial Urns were discovered at nearby Portmellon.

Mevagissey was once home to smugglers & pirates.  Still boasting a working harbour, at one point Mevagissey was once the centre of Cornwall’s pilchard fishery and boat building dating back to the 1700s. Some 40 million pilchards a year of which were salted in special cellars you can still see and packed into barrels for export to France and Italy.

Mevagissey is the second-largest ﬁshing port in Cornwall. These stunning surroundings and ﬁshing boats have changed only superﬁcially over the centuries.

A traditional Cornish fishing village, Mevagissey is not built for modernity with it tight single roads, narrow alleyways, small doorframes and petite pubs that are a squeeze to get in to.  Many of the buildings that are stacked high and painted brightly around the town are constructed from cob and slate.

The outer harbour wall was rebuilt in 1891 whereas the inner harbour wall dates from its original construction in 1774. This beautiful harbour plays a large part in the unique appearance of the little town and is an excellent protection for the boats and yachts that moor here.

Mevagissey Harbour Trustees have owned and managed the port since 1774. In 1988 the Trust became a charity and Mevagissey is now one of only three such Trust Ports in this country.

You could follow the South West Coast path on an 11-mile-long walk from Mevagissey to Par. It’s a challenge with its underlating hills and zig-zag paths but you get an amazing view and workout!

From the top of Polkirt Hill there is another amazing view over the higgledy streets, the harbour and the yachting pool.

Stay In A Beautiful Cornish Cottage Like This With Sykes Cottages. 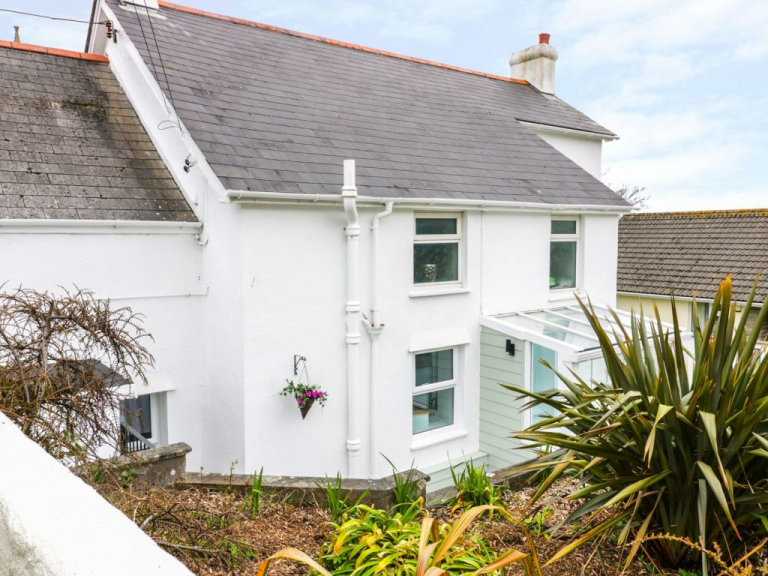 Want to see more from Mevagissey? Click below to watch the harbour web came.

The parish population of Mevagissey is roughly 2,214 with the majority of people being white British over the age of 50. This population swells by thousands in the peak seasons so if you’re planning on visiting. Go out of season!

If you’re looking for ideas on where to stay, use this map to find accommodation. Scroll in for a better choice.

Relevant Posts From The UK

Spread the love
Posted in UK
« How To Visit The Fairy Pools With Kids & Have Them All To Yourself, Isle Of Skye
Dark Scandi Noir Dramas To Keep You Entertained This Winter »