Things to do in Vieux Lyon with Kids

I’d heard that Vieux Lyon’s rambling, narrow cobbled streets were something magnificent and that it had quaint restaurants tucked into tiny buildings. It was true! It’s a lovely area, many restaurants are open on a Sunday (very unusual for France) and there’s plenty of things to do in Vieux Lyon with kids.

Where is Vieux Lyon?

Le quartier de Vieux Lyon, or ‘Old Lyon‘ as it is known in English, is situated in Lyon’s 5th arrondissement and is one of France’s most extensive Renaissance neighbourhoods.

It comprises four specific areas; Saint Jean, Saint Paul, Saint Georges and then the hill of Fourviere  – all home to religious establishments!

If you’re not interested in religion, don’t worry neither are we, however most of the architecture makes for a good viewpoint and you can’t help be astounded by the scale of the building and craftsmanship of work.

The Saint Jean quarter, houses the Cathedral of St Jean and is a good example of Gothic architecture.

The Saint-Paul section was made famous during the 15th and 16th centuries by rich Italian banker-merchants who made the city wealthy. The Saint Paul church with its Romanesque lantern tower and its spectacular spire mark the section’s northern extremity. I didn’t manage to visit this section of Vieux Lyon so there’s no photos.

Lyon has a long history with silk weavers and The Saint Georges quarter was originally the home of silk weavers in the 16th century prior to their move to The Croix Rousse (4th arrondissement) in the 19th century.

Walk Over the Passerelle bridge

Lyon is at the confluence of two rivers; the Saone and the Rhone

We crossed from the 1st arrondissement on foot over the Passerelle bridge which leads directly to Saint George’s church. A church has been located in this spot since 550AD but was destroyed in 732 by the Saracens. It was rebuilt in 802 and since then it’s history includes  a hay barn. a military hospital and a national property. The current church was rebuilt in 1845 by architect Pierre Bossan, who has described it as his ‘youthful mistake’. If only my youthful mistakes were of such grandeur!!

Passerelle Saint-Georges that traverses the River Saone, Lyon with the Basilica of Fourviere on the hill.

Marvel at the streets of Saint George

Walking through the old streets is delightful. The whole area is seeped in history, although apparently it was nearly derelict in the 1960s and was pretty much re-built. The cobbled pathways, the narrowness of the lanes, the buildings looming overhead and the wooden doors make for a great afternoon’s jaunt!

From our perspective St Georges offers a more authentically French area with traditional restaurants and food. Saint George is more quaint and rustic area in comparison to Saint Jean which caters more for the tourist with ice cream take-outs and cosmopolitan cafes. 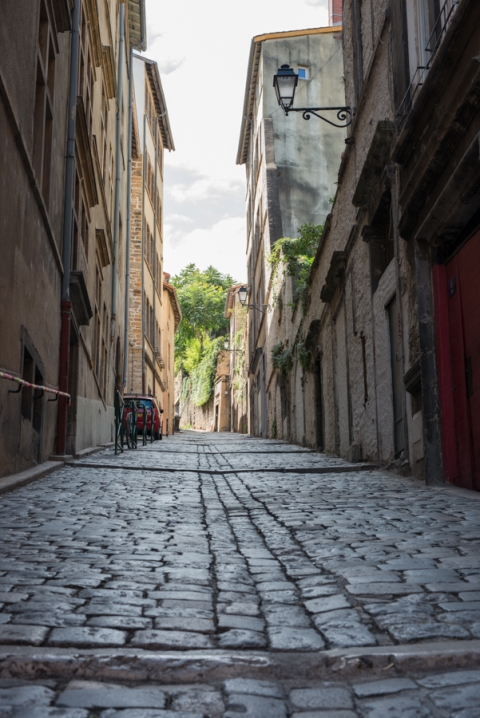 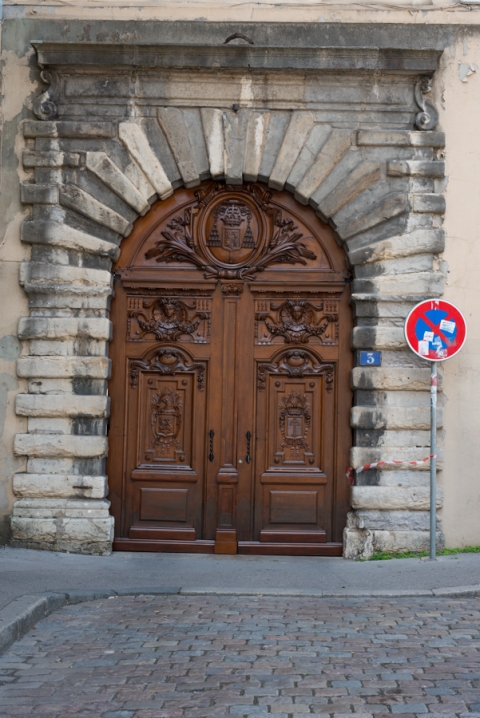 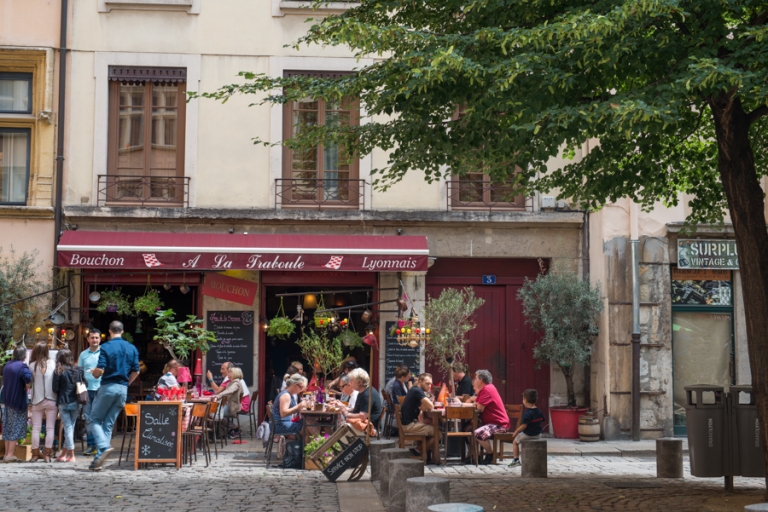 Spot the funicular to Fourviere

Saint George plays host to the metro station ‘Vieux Lyon’ which will take you up to the hill of Fourviere in a funicular rail way! I think the cost was 1.80 euros but I’m not sure. Make sure you have cash or bank card though. There are automated machines to purchase your ticket and they operate in a number of languages.

It is only a short journey but it does save you walking up some very steep steps! 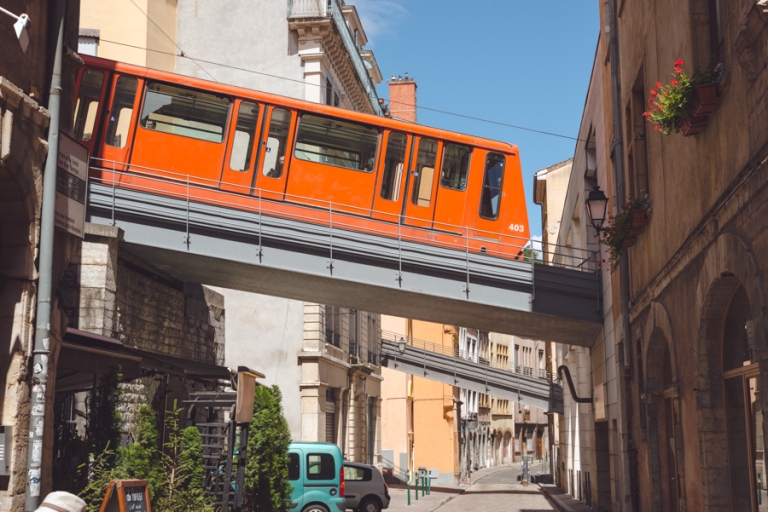 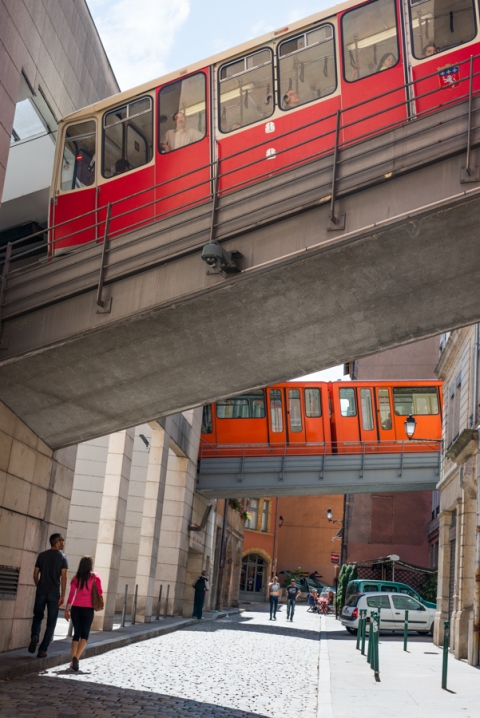 Catch the Funicular to Fourviere

The hill of Fourviere, also known as the praying hill, sits high overlooking Lyon. Whilst you can drive, parking is extremely limited. It is much better to walk up past the roman ampitheatre (dated 15BC) or catch the funicular train.

The view from Fourviere Hill is fanastic and on a good day you can see right across to The Alps at Chamonix. Below is a phone shot which shows the river Saone, the Cathedral of Saint Jean as well as much of the city.

The view over Lyon

Fourviere Hill is home to the Catholic Basilica of the Notre Dame of Fourviere (Basilique de Fourvière). Built in the late 1800s it is described as a ‘minor basilica’ – quite ironical really given its size!  Fourvière is dedicated to the Virgin Mary and each December 8th Lyon thanks the Virgin for saving the city with the Fête des Lumières – Festival of Lights.

Pop into The Basilica

The Basilica is IMMENSE in scale. It’s just huge. You walk in, in awe and wonder at how a building can be so big and then you realise there’s a whole other floor underneath!! Fourvière actually contains two churches, one on top of the other. The upper sanctuary is very ornate, while the lower is a much simpler design. 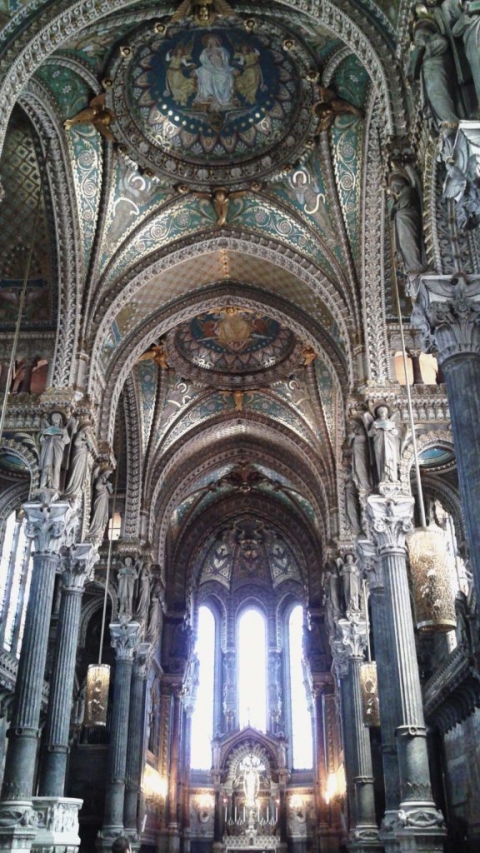 The Basilica has four main towers and a bell-tower topped with a gilded statue of the Virgin Mary. 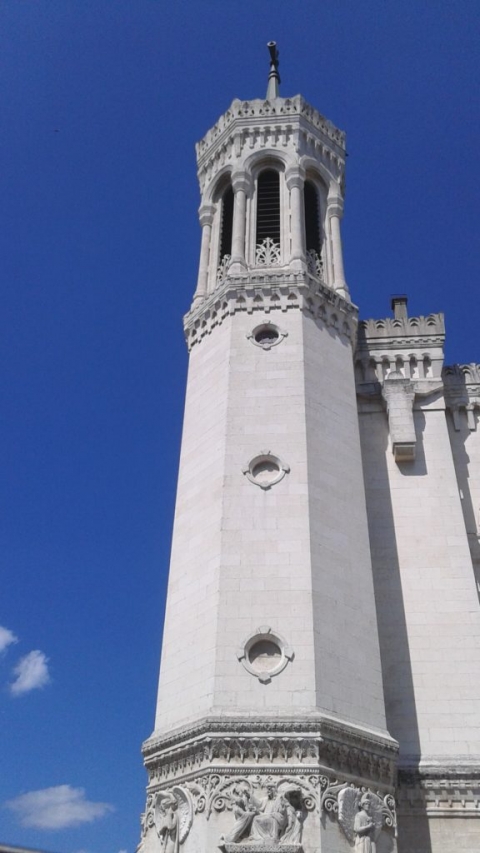 The basilica has acquired the local nickname of “the upside-down elephant”, because the building looks like the body of an elephant and the four towers look like its legs. What do you think?

Sit in the Roman Theatre

Have a seat in this ancient theatre that overlooks Lyon.  Lyon’s Ancient Theatre of Fourvière was built under the orders of Augustus and expanded in Hadrian’s time.

The theatre was constructed in two seperate centuries. Around 15 BC, a theatre with a 90 metre diameter was built next to the hill and at the beginning of the 2nd century, the final construction added the seats.

Each year, the Nuits de Fourvière festival takes place in the theatre and if you can see a concert here, I really recommend it. We couldn’t get tickets for Radiohead here (as they were €400-800 each) but we listened from nearby and it was spectacular.

If your kids are bored of traditional sightseeing and you’re visiting between April & October, you could visit the mini rope courses at France Aventures. There are different levels to suite all abilities.

Saint Jean is a Roman Catholic Cathedral dedicated to Saint John the Baptist. It is the current seat of the Archbishop of Lyon. It is situated in the main place of the Quartier Saint Jean.  The following photos were taken using my phone, so please excuse the quality! 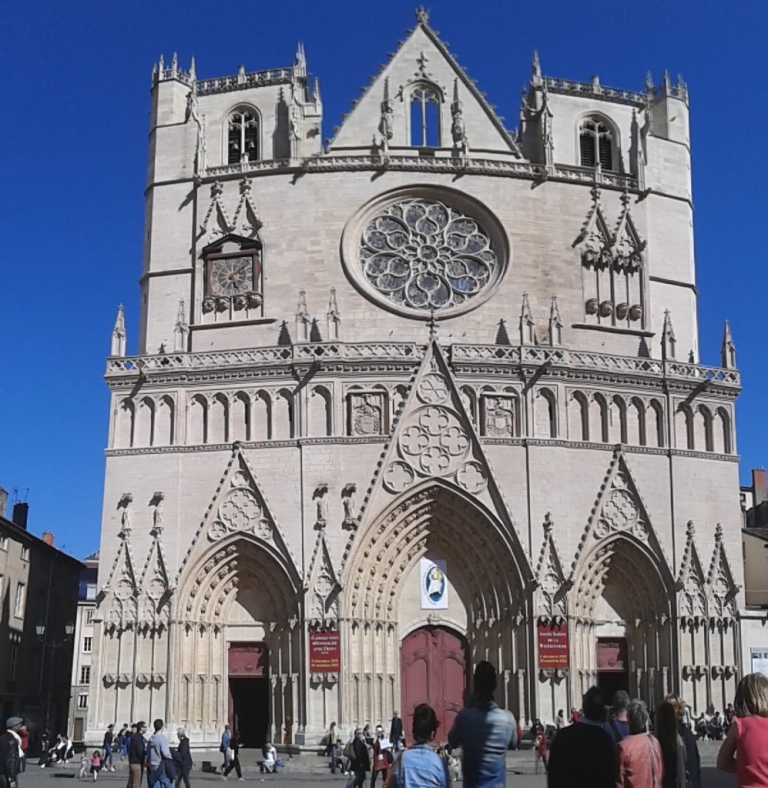 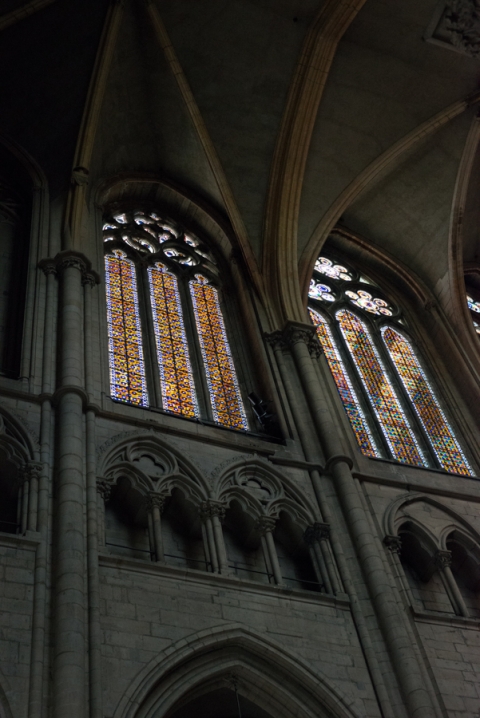 At the back of the Cathedral are the Archaeological gardens. You’re free to walk around the remains as you wish. 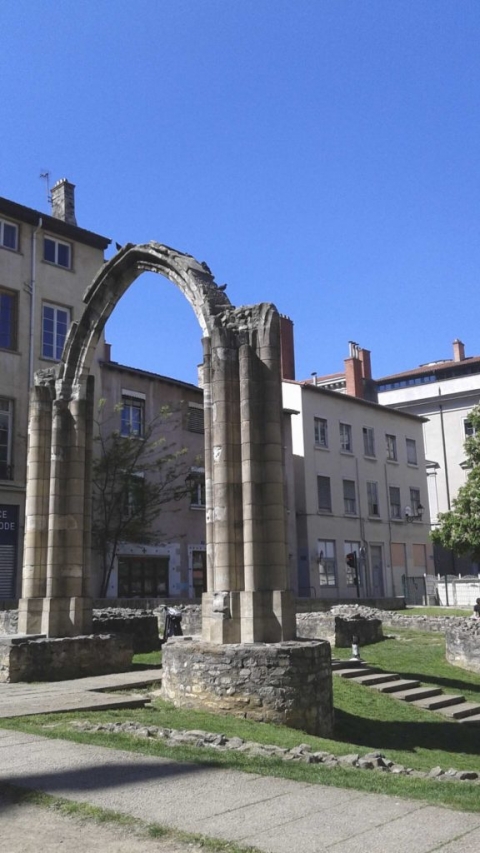 The architecture varies in colour and style and the buildings are quite impressive. It must be amazing to live in them! 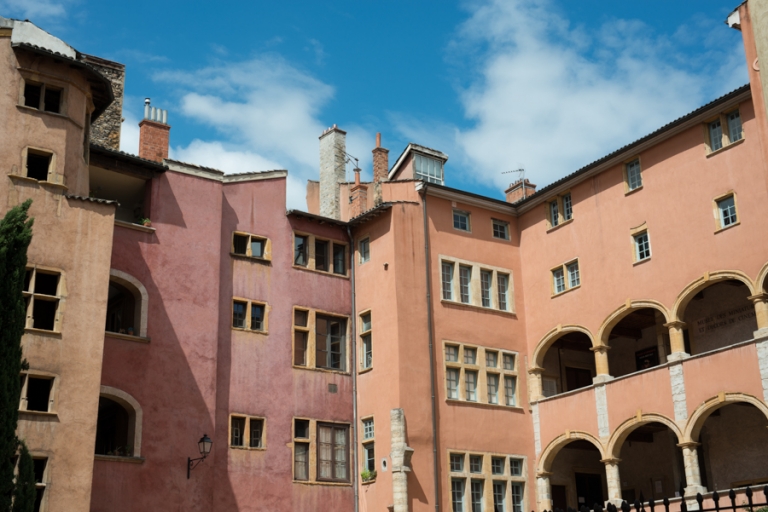 Buildings in the Saint Jean Quartier. 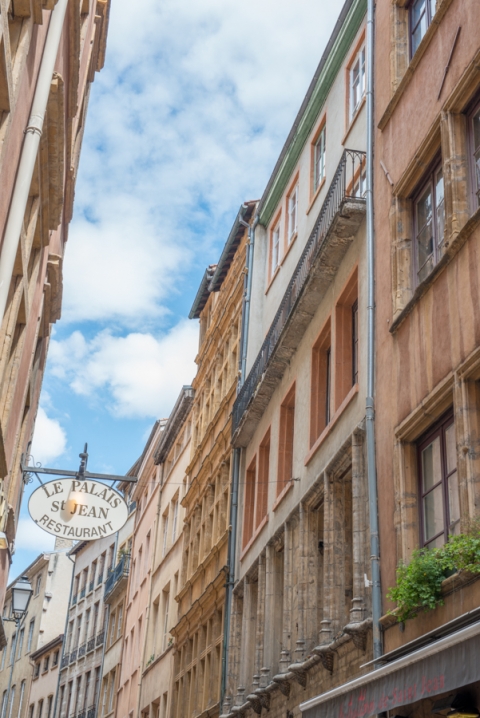 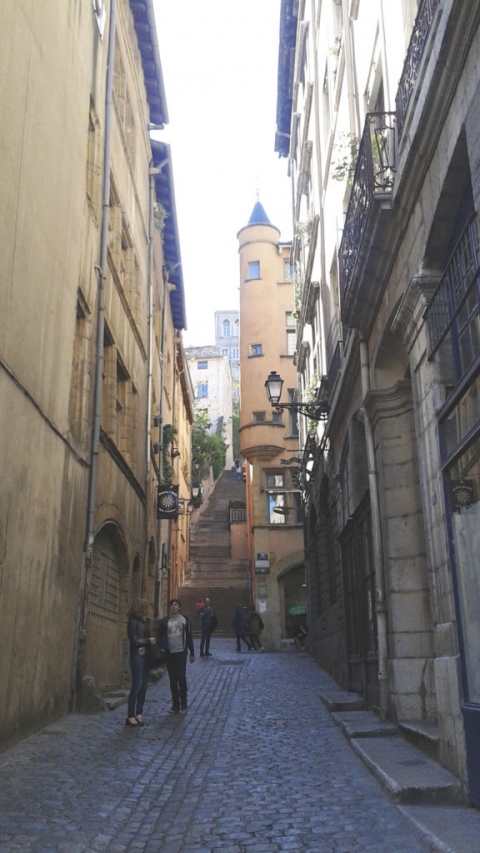 People watch from a Cafe

There are lots of lovely little cafes and restaurants littered around the around although on a Sunday not all are open. The cafes tend to cater for more drinks and crepes/gauffres, pancakes and waffles with a selection of teas and ice-creams. Whilst many of the restaurants are tucked into buildings, most of the cafes open up into the sunshine. It is not unpleasant to sit in the sunshine and drink tea. 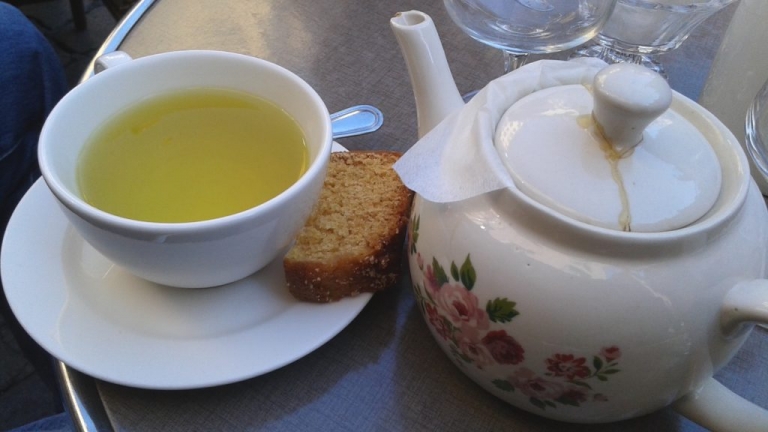 A cup of ‘Mate’ tea from South America with a slice of honey bread. 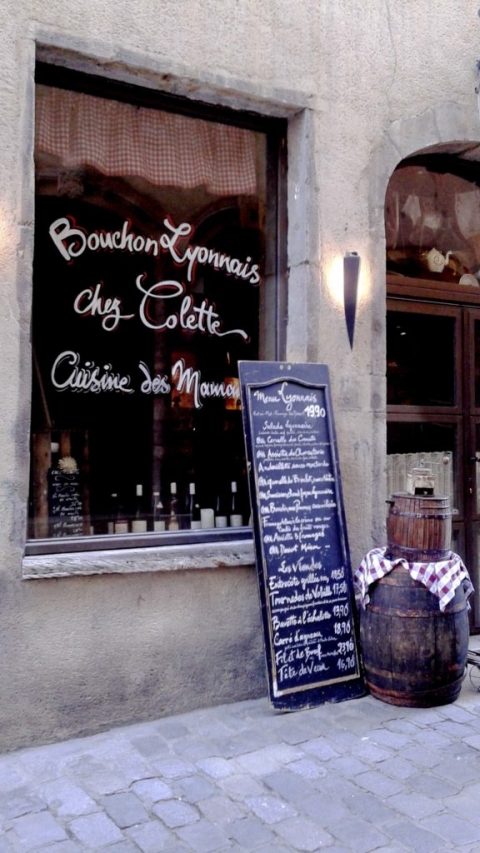 Tucked inside what looks like a tiny shop is the museum of miniature cinema. Despite many of these film techniques being replaced with CGI, the amazing collection of original masks, costumes and props is a must for any film boff.

Each section is completed with anecdotes and explanations of the filming techniques and tricks. The miniature section is mind-blowing, to see all those tiny details and minute perfection was definitely impressive.

It helped that the kids had watched the original King Kong and we could explain which sections had been filmed using these techniques.

Also check out the puppets at Musée Gadagne

Another museum tucked into a Renaissance building classified as a historical monument in 1920.

The puppet museum is interesting if a little weird and spooky.  They have puppets and a mini-stage for the kids to try.

The history museum is much larger and has over 30 rooms depicting the history of Lyon from prehistoric days. It is very child orientated within every room there’s a children’s activity to complete.

Where Could You Stay?

Check out these hotels and homes in Lyon.


Looking For Other Tours & Ideas?

Can We Inspire You?

See where else we’ve been and if we can inspire you to visit?