The idyllic Hamilton Island in Tropical North Queensland should be on every traveller’s must-do Australia list. If you’re planning on visiting this absolute paradise here is a 3-day itinerary for Hamilton Island.

What To Know About Hamilton Island Before You Go

To understand this beautiful set of islands we must retrace our steps back hundreds of millions of years ago and to a time that volcanoes in the area were active. Mountain ranges were formed and some thousands of years later the Whitsunday Islands were born.

We visited in winter (August which is almost winter) but the first thing that hits you when you land in its tiny airport is the heat and humidity. It rarely dips below 25 degrees and it’s just bliss! You definitely don’t need long sleeves or winter jumpers. The second thing that you realise is… GOLF CARTS!! Just 1200 people live on the island (mostly workers and tourists) and to protect them and the island cars are not allowed. You get golf carts to circumnavigate your way around the island. They might not go particularly fast but they’re really fun to drive around and race!

Here is a map of the island, just in case you’re interested! 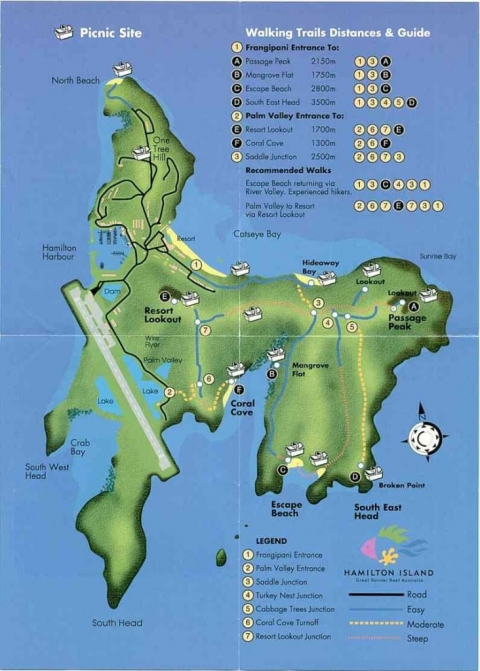 How To Get To The Island

You can fly directly to the island or fly to Airlie Beach and catch the ferry across. You could also drive up from Brisbane and along the coast.

Fly to Hamilton Island With Cheap Flights From Skyscanner

Where Could You Stay On Hamilton Island?

As a group of twelve, we stayed in  Villa Tropica, just north of One Tree Hill, with amazing views high over the hilly western coast.  I snapped this photo of the setting sun from the balcony deck. As you’re so close to the equator the sun sets quite early, usually around 6 pm every night.

If staying on land sounds a bit boring, the Whitsundays also offer ‘Bare boating‘ where you can rent and skipper your own boat for a week at a time! Alternatively, head over to Airbnb to check out these stunning island houses you could stay in.

Sunset from the deck

Catch your flight and make your way to Hamilton Island. Pick up your golf cart, settle in, go for cocktails and dinner.

Just before sunset, head up to One Tree Hill for cocktails, served every night from 5 pm. Sit on the hill, watch the sun go down over the boats sailing around in the channels between Hamilton and Dent Island.

Sunset from One Tree Hill 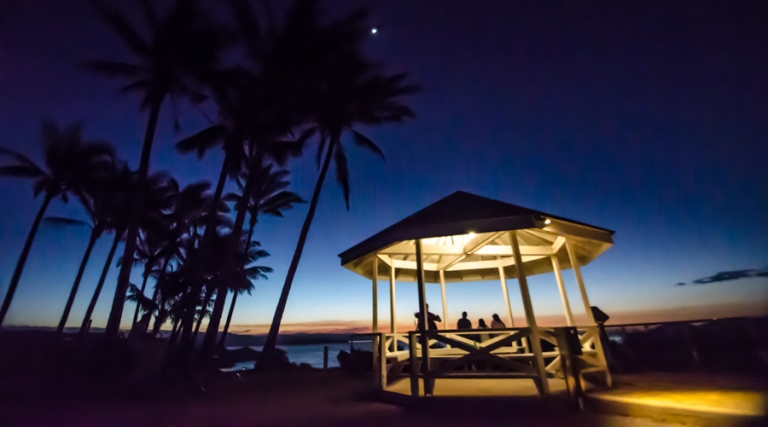 Photographing the sunset from One Tree Hill

Don’t forget to check out the skies above you.  There’s no daylight saving in Queensland so the sun sets at a near-constant time throughout the year and with virtually no street lighting and no light pollution, the skies are crystal clear. Distant galaxies and constellations are perfectly visible with the naked eye. 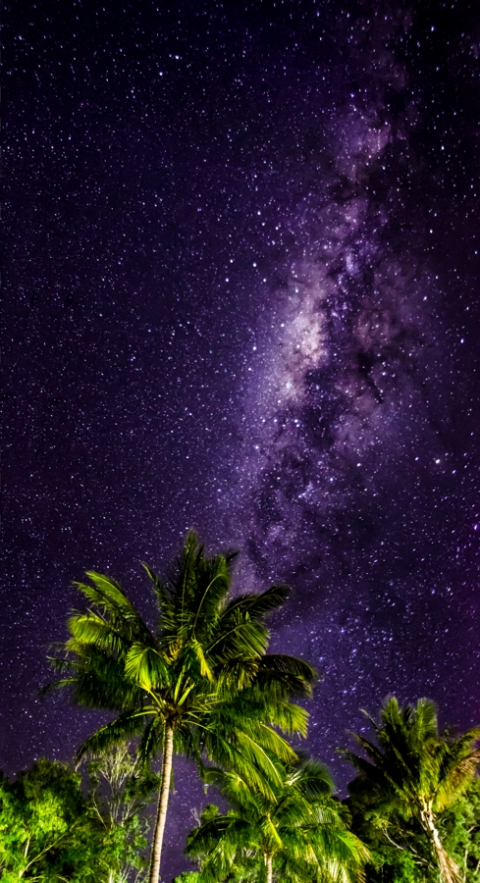 Night skies from One Tree Hill

On the east side of the island sits a small and sheltered chapel. It’s called All Saints Chapel. I am led to believe that the bells ring when you get married here although I didn’t hear them. 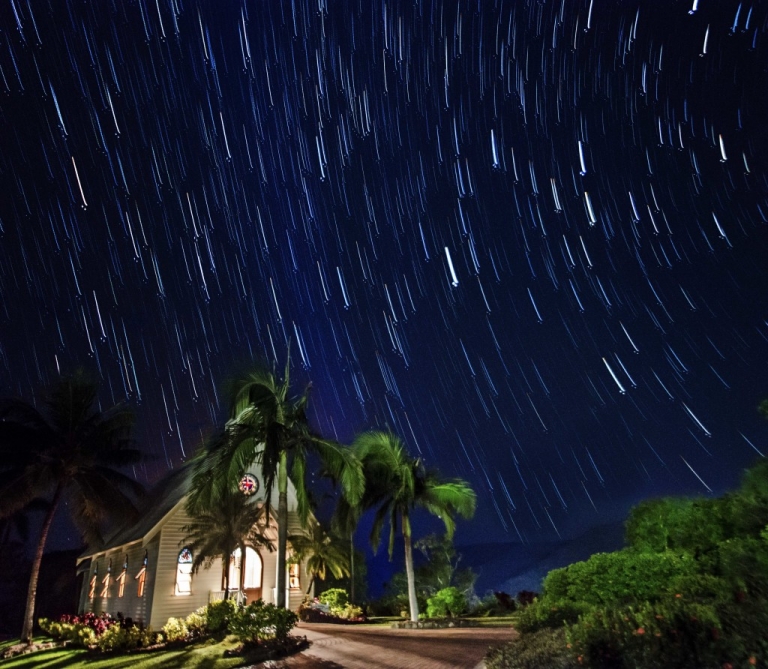 Star trail from All Saints Chapel

Eat dinner at the award-winning, fine dining Bommie. Its exquisite menu features Queensland delicacies including vegetarian alternatives.  Situated high above the marina it boasts an intimate wooden deck, 180-degree views, a great wine list, fairy lights to set the mood and no children! The prices reflect the quality.

Other activities that you can book from Hamilton Island

Northern  Queensland is most famous for its beaches which are pristine white sand with turquoise, transparent waters and plentiful marine life. No trip to this part of the world is complete without a visit to Whitehaven Island. In the summer it is heaving with tourists but in the winter there are fewer and you’re more likely to be able to appreciate its tranquillity and sheer beauty.

If you’re looking for the ultimate trip to Whitehaven, rather than book a tour you’ll need to hire a private charter. Sailing in The Whitsundays is an incredibly serene experience. The waters are usually calm and still and the visibility in the water is good. You can snorkel on nearby reefs and see the tropical fish, dolphins and turtles and of course during July and August there are whales.

You can book whale watching trips and even swim with them! 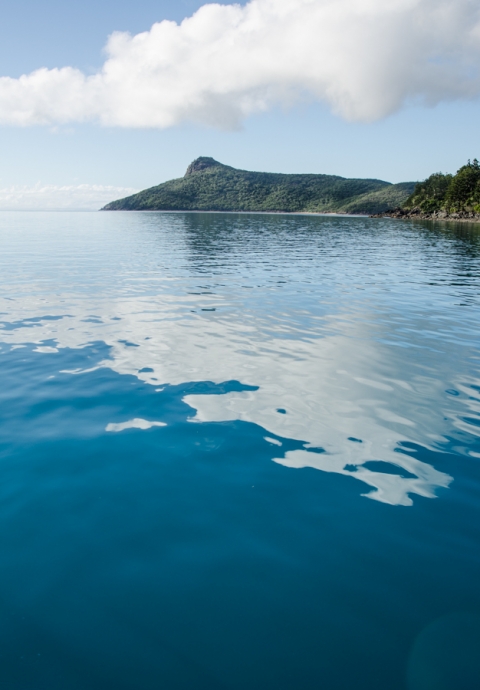 View of the northern tip of Hamilton Island from the boat. 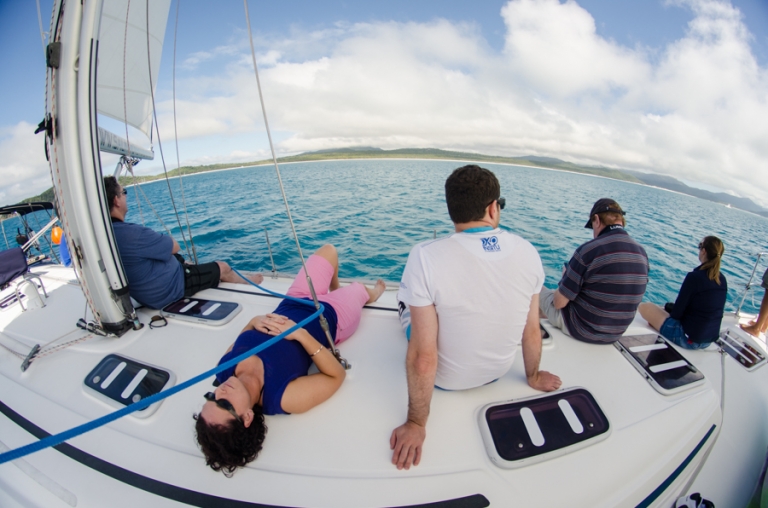 Chilling out on the boat

For a beach junkie, Whitehaven Beach is about as close to perfection as you’ll get! 7km of Queensland’s Cleanest Beach and the world’s top Eco-Friendly beach as voted 2010. There are no dogs and no smoking allowed on its pristine, pure silica sand beach. Unlike many of Australia’s sandy beaches which are HOT to walk on, this sand doesn’t retain heat.  Its closest reef is Martin Islet Reef just a short boat ride away – 3 minutes.

Whitsunday island is a national park and an environmental hot-spot with lace monitors, birds, wallabies, tree snakes, fruit bats and a huge variety of plants and trees.  It is common to see the lace monitors basking under the shoreline trees. Don’t worry they’re harmless. 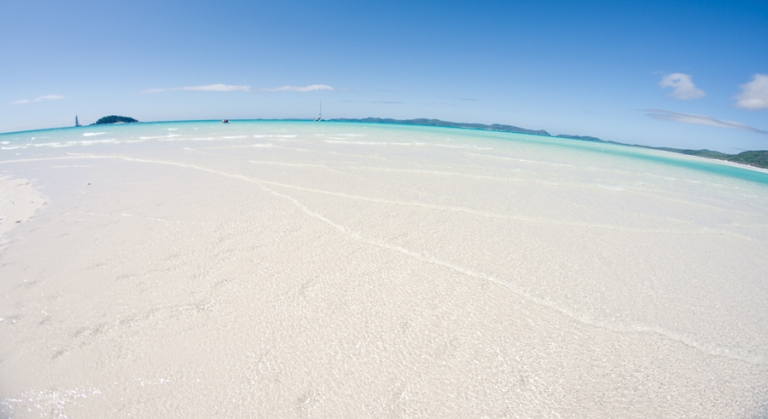 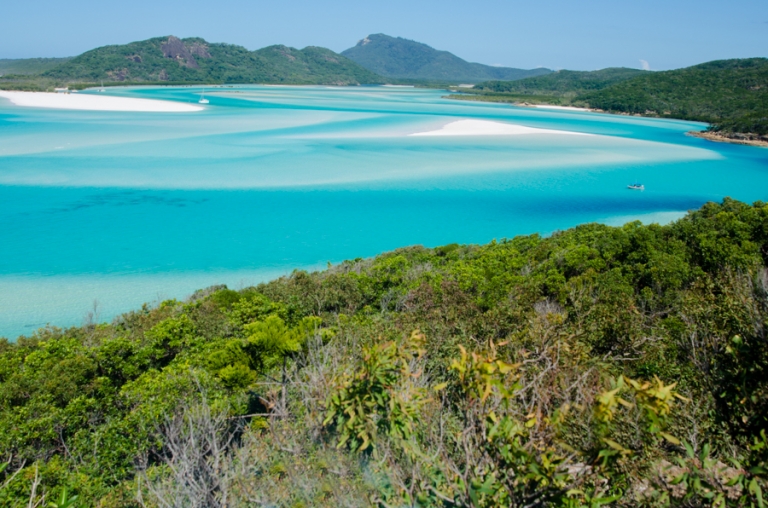 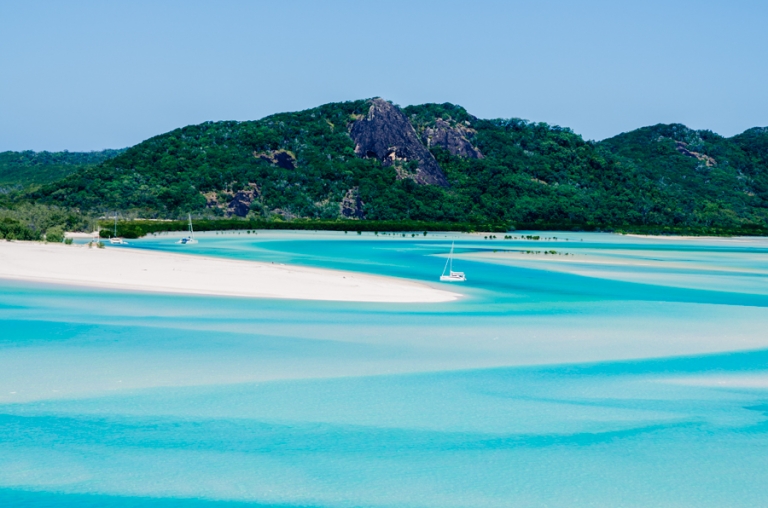 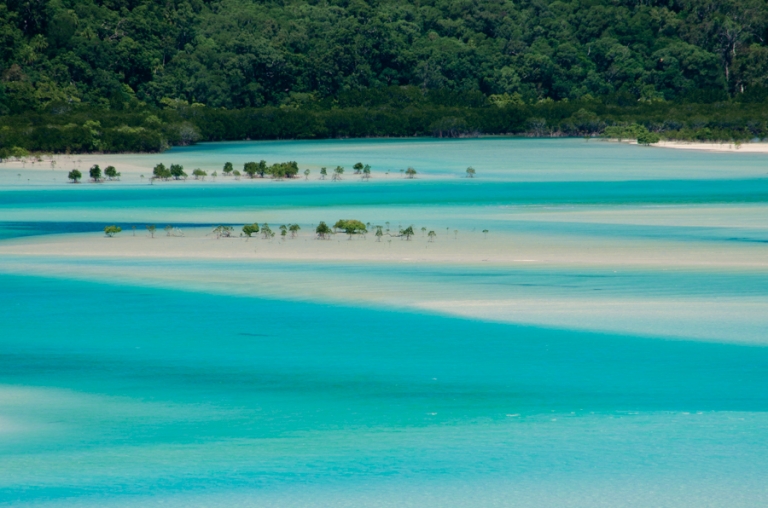 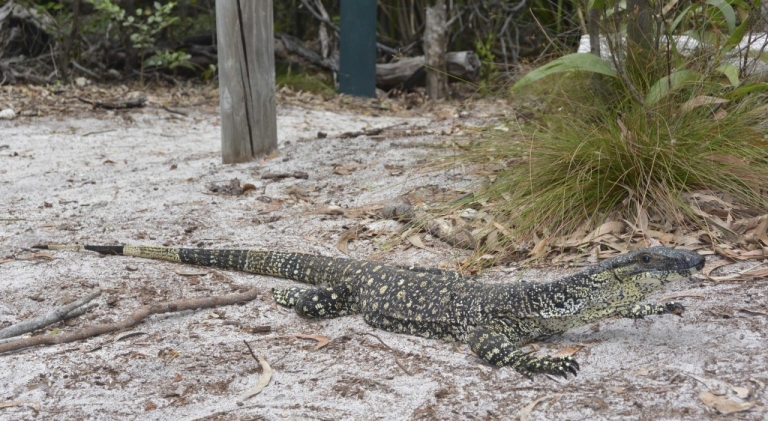 A lace monitor napping under the tree

Being the smallest crew member I was allowed to be winched up to the top of the boat for views across Whitsunday Island. It was much windier up there than I imagined but very peaceful. Thank you to the crew for winching me up! 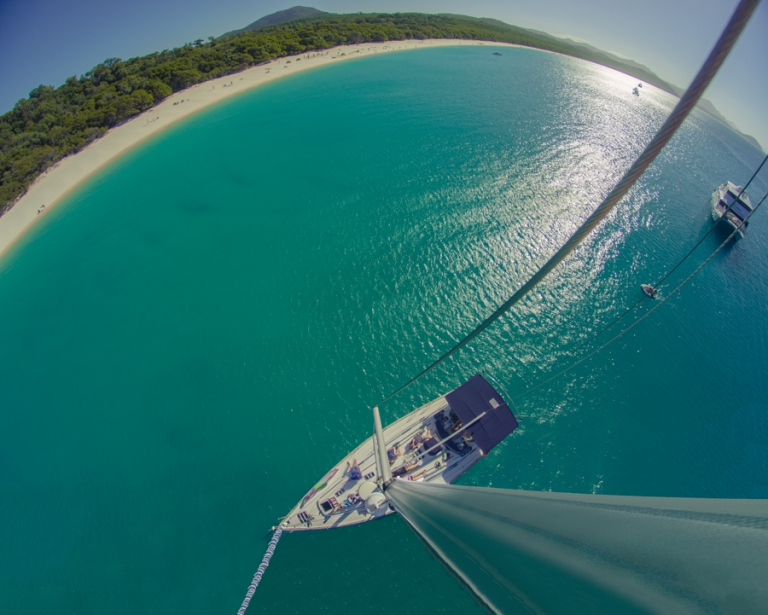 Panoramic views from the top of of the boat

Once you’re back on Hamilton Island, head for sunset at Catseye Beach, not sand but pebbles, stones and rocks. Overlooking the bay that houses Hamilton Island’s reef and the private, adult-only resort of Beach Club.  During the day it offers a swimming pool, a restaurant, a verandah bar and if you’re feeling indulgent why not pop into reef view hotel for a massage and spa!?

For dinner, pop into town and eat at the Marina Tavern which offers views over the waterfront as well as a great bar menu.  Whilst you’re in town you might as well stay for some cheeky cocktails at The Garden Bar.  Ask for their pink cocktail special! 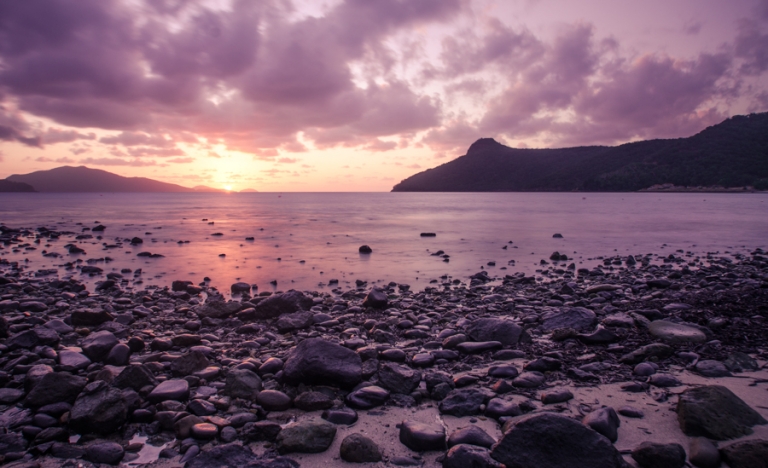 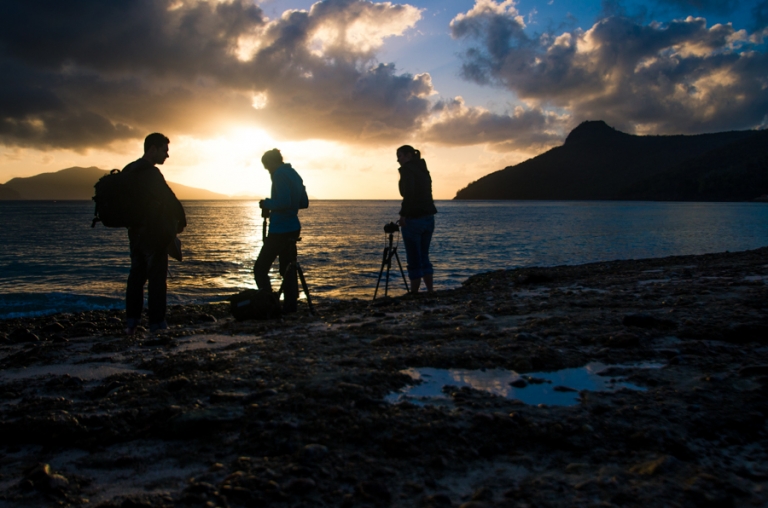 Go hiking up to Passage Peak and then take a helicopter above the island.

If you’re feeling energetic or like a brisk walk, don’t forget to take some decent shoes because Passage Peak Trek is the highest point on Hamilton Island. The peak is 1750m and from the top, you’re rewarded with spectacular views over Perseverance Island and the Coral Sea. 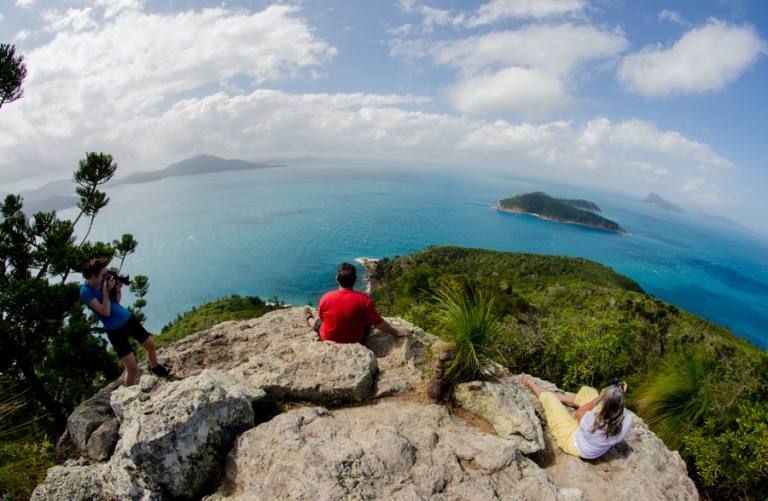 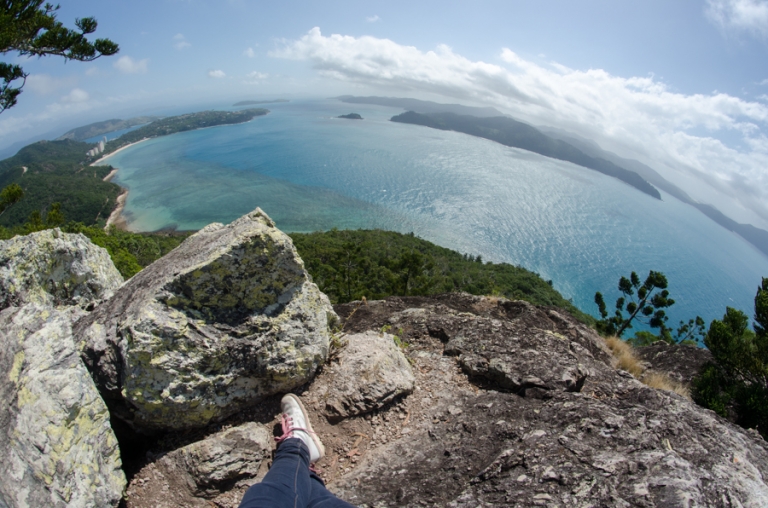 Book a helicopter flight with Hamilton Island Air and see the magnificence of the island and the infamous white beaches from above.  We went up as a group of four and paid $200pp for a 20-minute ride.

To celebrate your last day on the island head over to Popeye’s but watch out for those pesky white cockatoos who’ll eat chips from your hand! 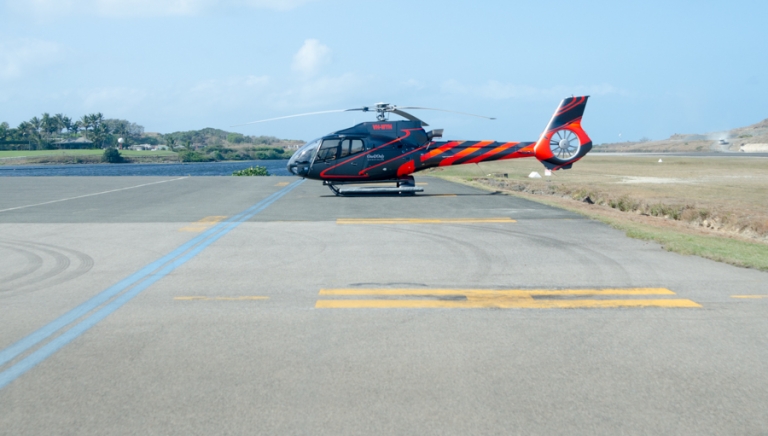 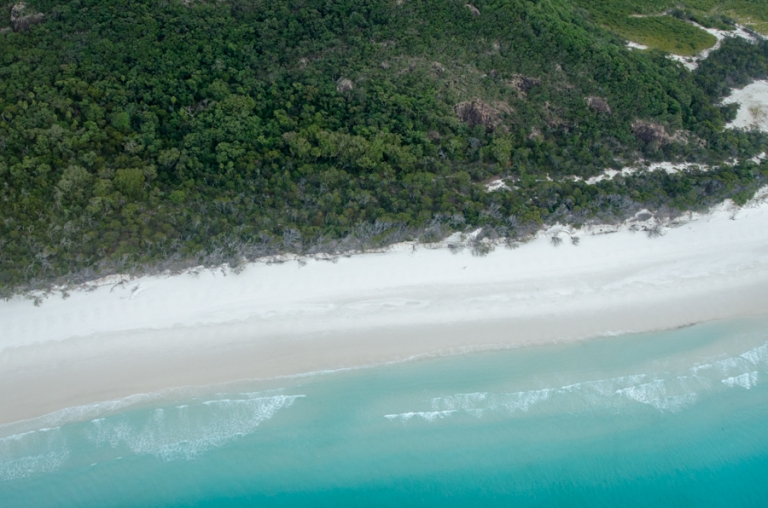 Views from the sky 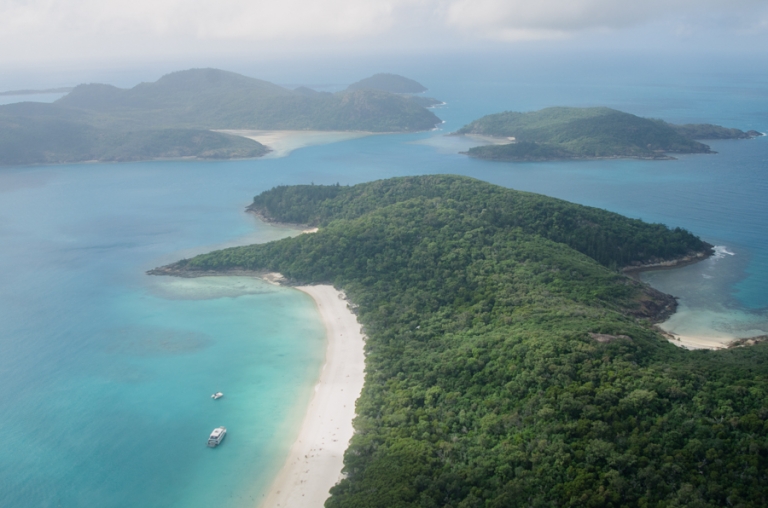 The Whitsundays by air 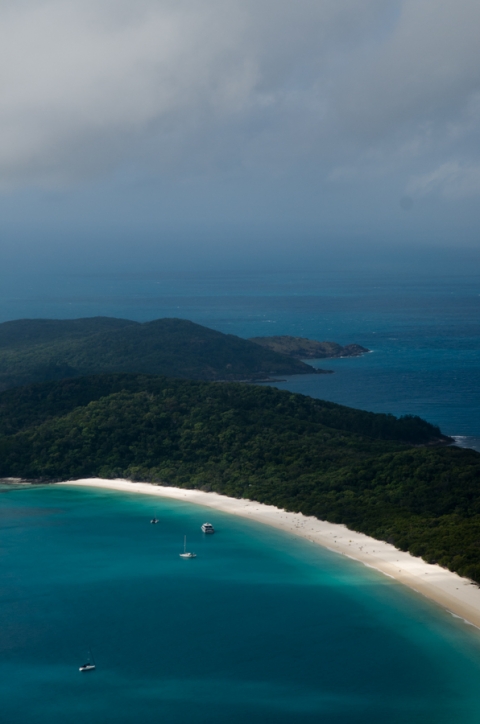 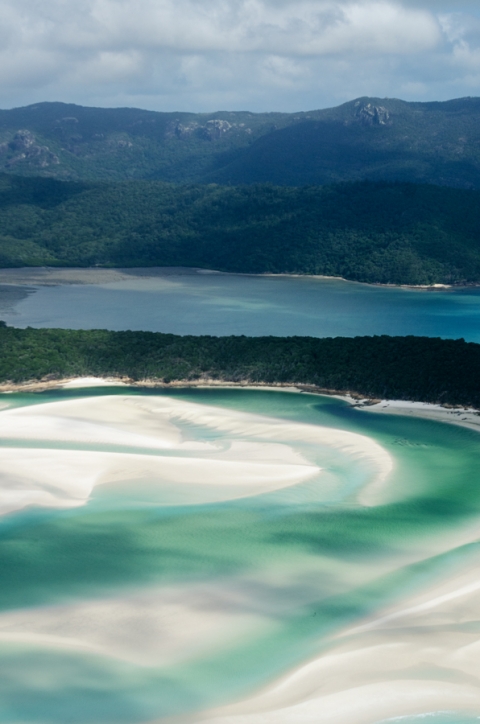 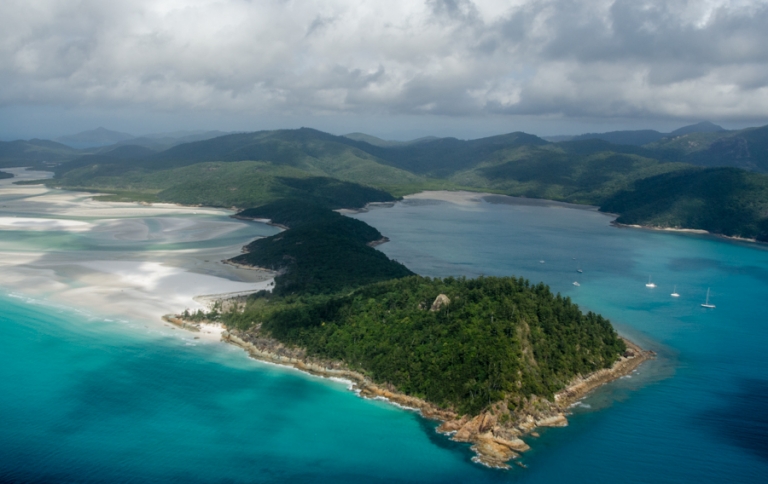 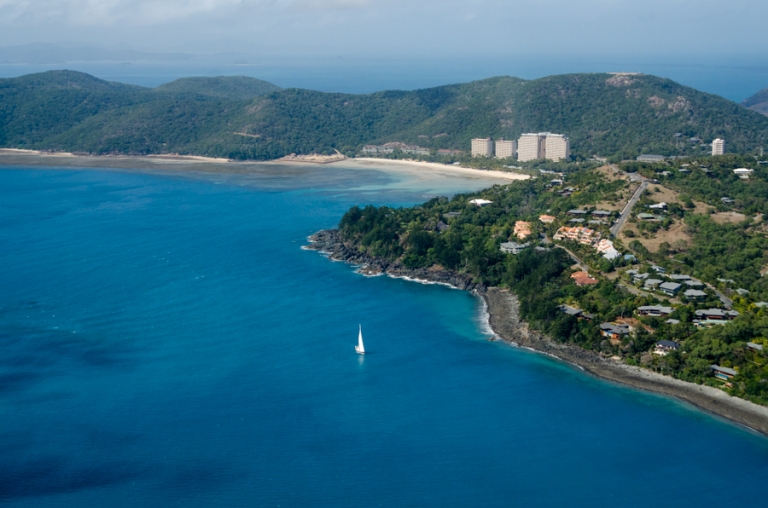 Get Cheap Flights To  Hamilton Island Through Kiwi

Book Your Stay On Hamilton Island?

Head over to Pinterest and see our boards for more inspiration. 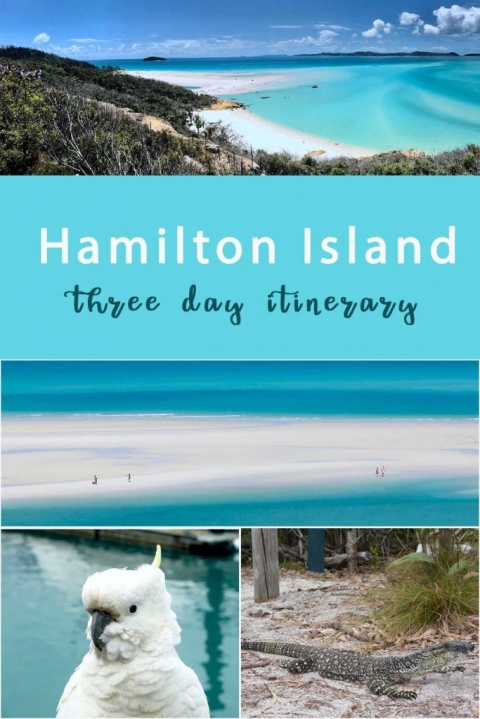 Spread the love
7
Shares
7
Shares
Posted in Australia, Tropical Qld
« We got up at 3:30am for sunrise at Dicky Beach, Queensland
Things to do in Vieux Lyon with Kids »