Winter In Scotland 25 Amazing Things To Do

Scotland is a country that continues to draw me back and despite its near continual rain, we’ve spent a lot of time up there. It might be colder in winter than summer but Scotland still has a huge amount to offer those brave enough to visit. If you’re considering a winter break in Scotland, here are 20 Amazing Things To Do In Winter In Scotland.

When Is Scottish Winter?

Scottish winter is from December to March. This coincides with colder temperatures and changeable weather, smaller crowds and shorter daylight hours. It also encompasses some of the big national events such as Hogmanay, St Andrew’s Day and Burns Night.

How Cold Is Winter In Scotland?

The average winter temperatures in Scotland are somewhere between -5  and 10 degrees C.  Expect cool, crisp weather with rain, snowfall or ice. What makes the winters in Scotland feel colder however is the windchill factor. The different regions in the Scottish Highlands and Islands are influenced by micro-climates, which means it could be snowing in one place and 20 miles down the road it’s beautiful sunshine.

The chances of snow are high although it will most likely be higher up in the peaks of the Highlands.  The roads are usually snow-free and are gritted to avoid road closures that being said they can be icy and you should drive appropriately.

20 Amazing Things To Do In Scotland In Winter

Despite the cold and the fewer hours of daylight, taking a road trip in winter can be very rewarding as there are hardly any other travellers. You’ll need to plan the road trip well and make sure attractions, hotels and restaurants are actually open for visitors. You might want to consider taking snow chains and having comprehensive breakdown if you’re taking your own vehicle. If you’re renting a vehicle double check breakdown is included in the rental.

The NC500, the Cairngorms in winter, the Isle of Skye and the NE250 are all driveable in winter although you should aim to have a more flexible schedule to allow for any weather changes that may occur.

Scotland’s largest city, Glasgow, is often overlooked for Edinburgh but there’s loads to do and much is free.

Free things to do in Glasgow:

3. Build Your Own Ice Hotel

If you fancy getting physical and actually building your own ice house, you can book an overnight expedition and build and stay in your own snow hole.

Both Scot Mountain Holidays and Mountain and Sea Guides offer the opportunity to explore the Cairngorm mountain region, build your own ice hotel and stay in it.

4. Take In A Christmas Market

Here’s a range of Christmas markets that take place around Scotland. The dates may vary so always check the websites.

Curling is a Scottish created sport.  There are indoor curling clubs across the country, however, occasionally when a cold spell hits winter in Scotland, the lochs and ponds freeze over and curling is played outdoors. Find a taster session and have a go.

6. Go To The Irn-Bru Carnival

Scotland is famous for a fair few things but none more so than Irn Bru. A sticky, sweet, fluorescent orange drink that is rumoured to be made from girders!

The Irn-Bru Carnival on the 12th January is Europe’s largest indoor funfair with a range of thrill and family rides suitable for everyone. The highest ride is 40m tall but don’t worry, Irn-Bru consumption is not required.

All rides cost 1 voucher  and you’re given 10 vouchers with every ticket. Additional vouchers cost £1.50 each or £5 for 6. Some rides have height restrictions, see the height chart for more details.

Head to the Cairngorms National Park and visit the Cairngorm Reindeer Centre. In winter you also have the option of meeting Santa. The centre is home to around 150 free-range reindeer.

8. Go Ski-ing Or Learn How To Snow Board

Before you book your skiing holiday in Scotland, check the Snow Forecast website beforehand.

Hogmanay or New Year’s Eve as the English call it, has origins back to the celebration of the winter solstice among the Vikings and it’s a wild affair in Scotland.

Most large hotels and towns will have their own events so if you find a nice hotel you can ask if they run their own festivities.

Book a hotel for Hogmanay

11. Look Up Into The Dark Skies For Scotland In Winter

12. Will You See The Northern Lights?

If conditions are favourable, you might catch a glimpse of the Northern Lights.  The Aurora is caused by electrically charged particles released from the sun that enter the earth’s atmosphere and collide with natural gases like oxygen and nitrogen.

It’s practically impossible to see the Northern Lights in a city though some locations where you might see the northern lights include the Isle of Coll, Cairngorm National Park, Angus and Aberdeenshire.

Check out the official International Dark-Sky Association website for the best time to visit.

Do you fancy a high-speed race along the East Coast sands? Land yachting uses a small boat on wheels to give you a high adrenaline thrill whilst staying mostly dry.

Open all year round, Blown Away Experiences in St Andrews, Fife gives you a lengthy beach to practice your land yachting skills.

Burns night, which is held on 25th January, is a celebration of Scotland’s most famous poet, Robert or Rabbie Burns. It’s a nationwide celebration of his birthday and most festivities include a sit-down meal with poetry readings, haggis and Scottish dancing.

There are a lot of celebrations but a few include:

There are still plenty of festivals to attend in winter in Scotland and many revolve around food and drink!

16. Hire Your Own Romantic ‘Winter in Scotland’ Hot Tub

Is there anything more romantic than a rural lodge or remote cabin with an outdoor, wood-fired hot tub?

Surrounded by Scotland’s wintry landscapes, and hopefully, some wildlife too, spending a few nights in a beautiful cabin and a bubbling, hot tub accompanied by a hot toddy and maybe some snow to top it off.

Click Here To Book A House Through VRBO With Its Own Hot Tub. 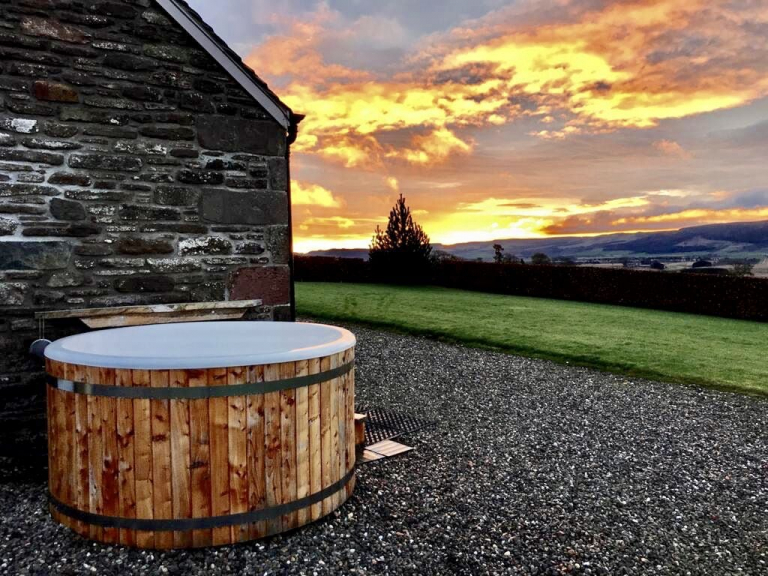 What better way to keep warm in winter in Scotland, than drinking whisky by a roaring fire and with over 120 active distilleries spread across Scotland there’s bound to be one you love.

Some of these distilleries were opened in the 1700s and remain in production today. Whisky productions are split into five regions; Campbeltown, Highland, Islay, Lowland and Speyside. There are distilleries that remain open throughout the winter months for you to take tours of and discover the processes of making Scotland’s national drink.

Some of these include:

You can book loads of outdoor classes during winter in Scotland but if that’s a bit too much you can always head to the indoor Ice Factor centre in Glencoe and learn the basics of ice crampons in a taster session of an hour.

The Ice Factor Centre has the tallest indoor ice wall in the world at 12m/40 ft. Book a taster session and see how high you can climb.

Scotland has over 900 offshore islands, most of which are found in four geographical areas: Shetland, Orkney and the Hebrides which are sub-divided into the Inner and Outer Hebrides. At the time of the last census in 2001, there were 95 inhabited Scottish islands with a total population of 99,660. Ten years earlier, there were more than 100,000 people living on islands. Despite this overall decrease in island population, the number of inhabited islands has risen over the last decade – there were only 87 recorded as having permanent populations in the 1991 census.

The islands with the oldest populations are Lismore (45% of Lismore residents are aged over 60) and Cumbrae (over 40% are aged over 60).  Fair Isle and Vatersay have the highest percentages of younger islanders. On Vatersay, 32% of the population is under the age of 16 and on Fair Isle the figure is almost 29%.

The Edinburgh Vaults or South Bridge Vaults are a series of chambers formed in the nineteen arches of the South Bridge in Edinburgh.

There are around 120 rooms (vaults) beneath the city, originally built in the 1700s for workshops and storage space. These rooms range from 2-40 metres squared and became dwell spots for the poor, homeless and many a ghost story.

21. Stay In A Glamping Pod or Yurt

Visit Belhaven Bay beach in Dunbar at mid/high tide and it will seem as though there is a little bridge sitting in the middle of the water which leads to absolutely nowhere.

The little bridge is actually made for crossing Beil Water to get to the beach and the bridge can be seen and used at low tide. This East coast beach is one of the sunniest areas in Scotland and this floating bridge point is a lesser-known spot for sunset photographers.

At high tide, the water threatens to swallow the bridge, making it look as though it’s stranded in the middle of a sea. The sight of the lonely bridge surrounded by swirling waters that reflect the colours of the sky makes for a very unique photograph.

Thanks to https://unusualplaces.org for this photo

Scotland has some of the nicest beaches in the UK with Caribbean style white sand, sweeping coves and turquoise waters. This doesn’t change in Scotland in winter and those same beaches are still as appealing, so long as you wrap up warm.

Birds that over-winter in Scotland include oystercatchers, mute swans, redshank, eider ducks, shelducks and wigeon.  You can watch them puddling in the mud and sand or diving to look for food at wildlife reserves, lochs and beaches all around the country. Geese, birds of prey including sea eagles

It is estimated that there are approximately 3,000 castles in Scotland – nearly one for every 100 square miles. It’s difficult to narrow down any favourites but here’s some we think are pretty, unusual, unique or historically significant. 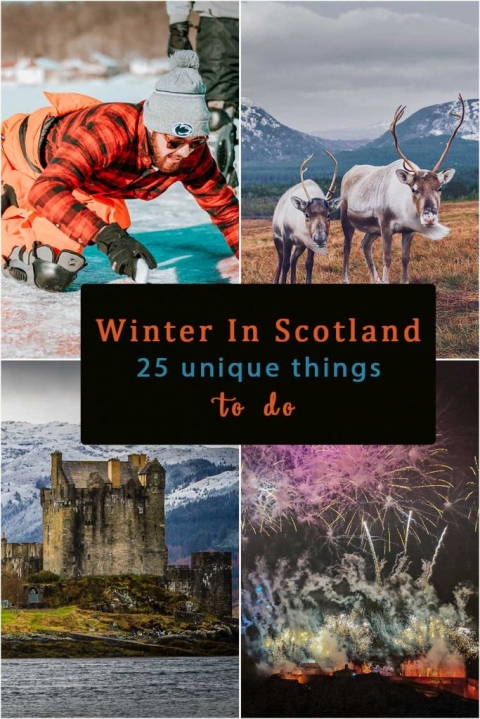 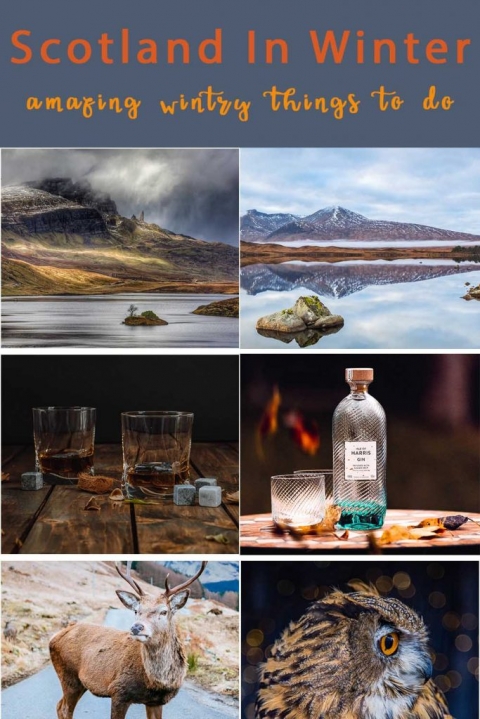 Spread the love
Posted in Scotland, UK
« 5 Reasons To Stay In Povlja, Croatia, On The Island Of Brac
Island Hopping Croatia. What Is The Best Croatian Island To Visit? »