This post is all about why we think hiking Rincon De La Vieja with kids should go on your must do list in Costa Rica.

Inland Guanacaste is not on most travellers’ lists, so as off the beaten tracks go it’s much less explored than other areas that have succumbed to mass tourism in Costa Rica. There’s loads to do in the area if you’re not afraid to travel independently and see a bit more of the country.

Rincón de la Vieja Volcano is the largest and most active volcano in Guanacaste, Costa Rica. It’s 600,000 years old, has nine craters, 32 rivers flow down from its sides and it’s 1,916 meters high and 15 km wide.

The park actually has two volcanoes

This impressive volcano and its dormant sister, Santa María Volcano, form the center of the 34,000 acre Rincón de la Vieja National Park which is a UNESCO World Heritage Site of the Guanacaste Conservation Area.

Its name means “The Old Woman’s Corner”, a reference to a local legend about a girl whose lover was thrown into the crater by her father. She became a recluse, living on the mountain and was credited with powers of healing.

Rincon de la Vieja national park in Costa Rica is SO BIG it has two volcanoes. Click To Tweet

The park, like many in Costa Rica, is so big it’s serviced by two ranger stations, one in the Santa Maria sector and the other in the Las Pailas sector. We visited Las Pailas.

Inside the park, you’ll find exotic and rare flora & fauna, including kinkajous, pumas, a variety of monkeys, sloths, tapirs and jaguars. On the Santa Maria side you can see rare emerald toucanets and blue-crowned motmots glowing in the sunlight along with vibrant fuschia and purple Guaria Morada orchids.

The significant history of the park

The area is of important historical value because the Battle of Hacienda Santa Rosa was fought here back in March 1856.  The fight was between William Walker and the Costa Rican people who drove him out of the country.

In this battle Costa Rica’s most famous, national hero Juan Santamaria, the drummer boy, died defending Costa Rica. La Casona in the Santa Rosa National park is a colonial home paying tribute to this war and is filled with military memorabilia.

Which entrance should you visit?

The Las Pailas sector of the park is located on the Pacific slope.  It is quite interesting with plenty of evidence of volcanic activity.  In addition to rare tropical dry forest, there are natural hot springs, boiling mud pits, and fumaroles.  This area is very hot and dry most of the year. the paths are dusty and with little shade.

The Santa Maria Sector is located on the Caribbean slope of the park.  This area receives more precipitation and the result is lush forest with different characteristics than the dry forest on the other side of the park.  There is a small display about traditional cattle ranching (not always open) and good hiking trails.

How to get to Las Pailas: Rincon De La Vieja With Kids

Rincon De La Vieja With Kids: How much does it cost?

If you are self-driving to the Park you will encounter a large, closed gate watched intently by an elderly gentleman with a hearty smile. The park’s entrance is accessed through his land and he asks for a small donation for the upkeep. This must be paid in cash in colones and I think it might be 200 colones but I cannot remember exactly. Just keep a little bit of cash spare to hand.

You MUST TAKE YOUR ID otherwise you won’t be allowed entry. My driving licence was sufficient.

When’s the best time to visit?

The best time to visit the park is between November and April when you can expect low amounts of precipitation and a greater chance for viewing wildlife.

We visited in March and had no rain is the week we spent in Guanacaste. By the looks of things, it hadn’t rained in a while either.

Which track should you hike with kids?

There are five hiking tracks in this area of the park and if you get there early enough there’s no reason why you can’t hike two. Sadly when we visited the largest track was shut due to volcanic activity and we arrived too late to do more than one hike.

The hike is roughly 5km in each direction. The track alternates between sandy and dusty trail, stepping over medium sized boulders and tree roots and a moderate incline of 200m.

It is not a challenging hike but the heat and dust can make it more of a drag.

You can download this trail from Gpsies.com but it’s really not that difficult and you shouldn’t need it.

See How Easy it is to Pin This 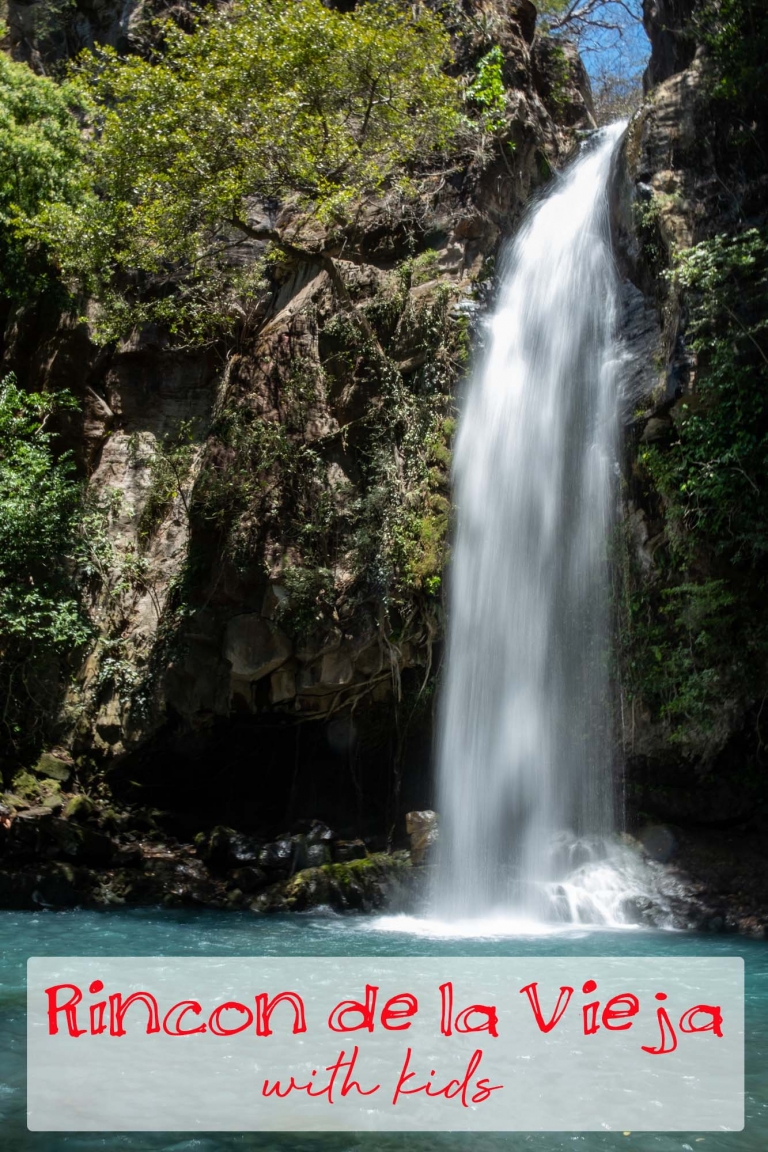 What else could you do in Costa Rica?