We decided to have a recap on what we’d done last year and….well, what a year 2017 was for us!! Note: I actually wrote this in December 2017 but forgot to hit publish.

In 2016 we had spent six months being location independent in France and two months in England, so 2017 was our first year being full nomads on the road.

We visited some amazing places, spent a whole lot of time together, undertook some ambitious hikes, had masses of fun, clocked up far too many air miles and swam in a lot of very gorgeous seas.  Carry on reading if you want to know where we visited and how we fared. 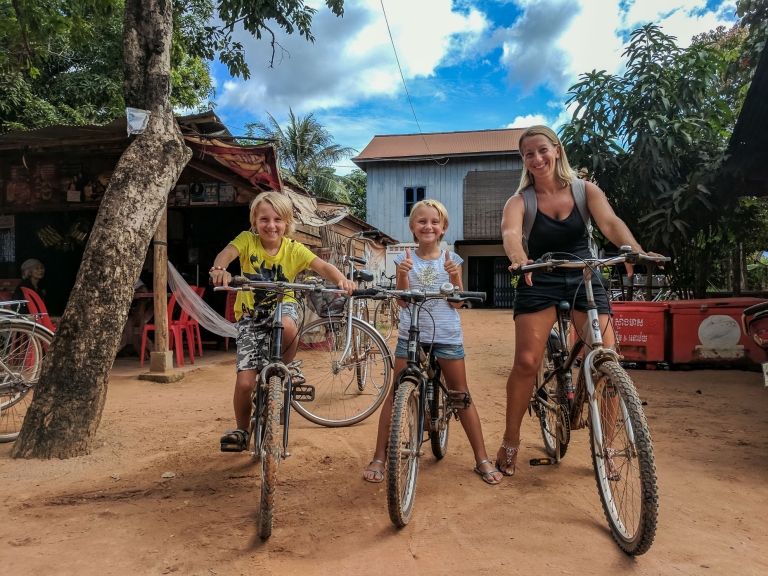 Our trio on a cycle tour in Cambodia

We started out our New Year in Madeira, Portugal. A small and windy island in the middle of The Atlantic, closer to Africa than Portugal.

Madeira is volcanic, green and rugged, with mountains, high cliffs, pebbly beaches and hard to reach coves. The capital city is Funchal which is famous for its botanic gardens and its large New Year’s fireworks show, which we missed by a day lol.

We undertook our first big and difficult hike of 15km as well as many other smaller ones. 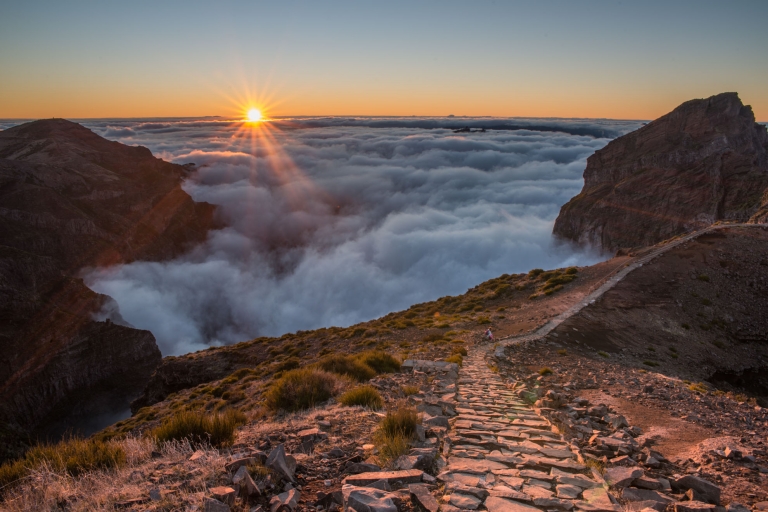 The sunset from Pico Areeiro

February saw us do a quick turn around in London at Gatwick (our now second home) and we flew into Agadir on Morocco’s south-west coast. I had booked return tickets but that was a big mistake as Morocco was our least favourite country.

Morocco turned out to be the only country we’ve visited that we really and truly detested. The kids and Emma were very sick from drinking the watered-down orange juice and never recovered for the four weeks we were there. After a trip down to Sidi Ifni, we drove into the desert for Imogen’s birthday and ended with a stay near Marrakech’s medina. Still, it wasn’t all bad. We thoroughly enjoyed our hammam and we rescued a kitten too. 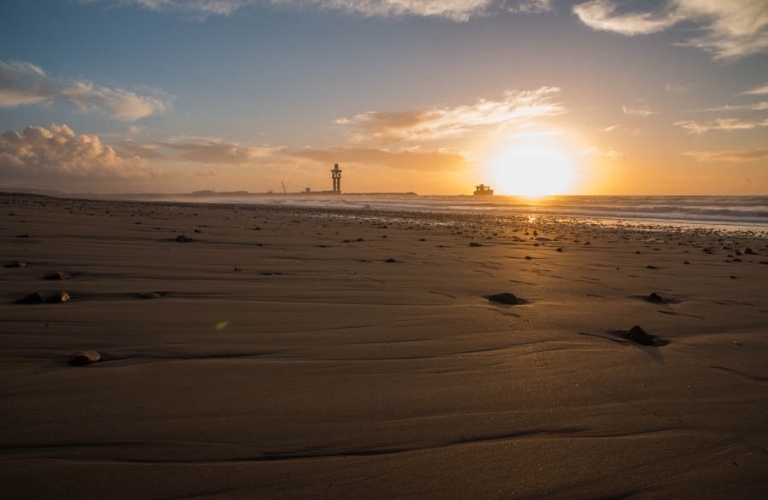 Sardinia’s beautiful southern coast line was still pretty warm when we flew in for March and we spent a perfect few weeks on the beaches in Villasimius before spending a week near Pula and a further week near Bosa.

Some of the highlights were discovering Tharros the Roman city  and street art in Flussio. 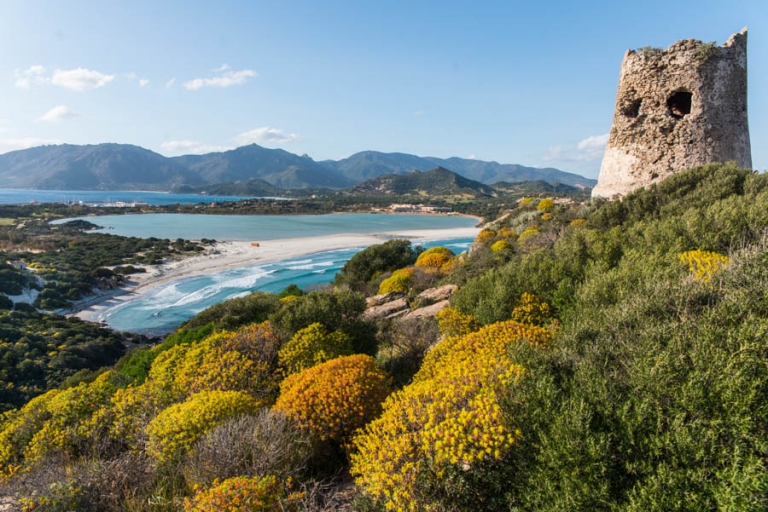 We had to return to the UK in April for our eldest daughter to sit an exam. We spent some time in Wales and Gloucester and managed to sneak in an action packed week in Seville.

It’s always a pleasure to return to our home country and we took delight in visiting an amazing bird sanctuary and staying on a house boat on a Gloucester canal. 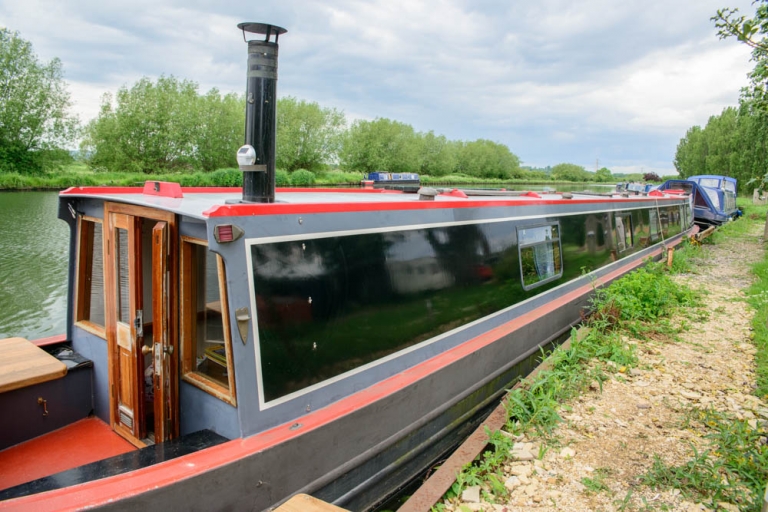 The narrow boat we stayed on

Montenegro in May beckoned and having learned our lesson from Morocco we didn’t book return flights. It turned out to be a great move because we loved Montenegro and spent six weeks there in total.

We visited Kotor old town and climbed the steps to the San Giovanni Fortress, had a cocktail in Perast, canoed the bay of Kotor and visited the famous blue cave.  We actually did SO much more too, so don’t forget to check out our blogs. 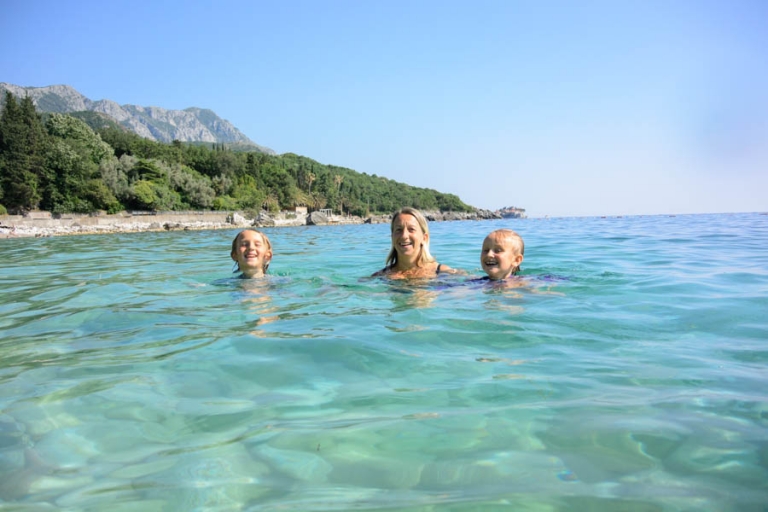 The kids and I swimming at Kamenovo Beach.

After our time in Montenegro, we hopped over to Serbia’s capital Belgrade and then spent a rushed three days in Athens after I mistakenly forgot the date of our flight.

We managed to board a flight to Thessaloniki at 1:00am and then slept on a train down to Athens. It cost us a fortune so I will definitely not be making that mistake again!! 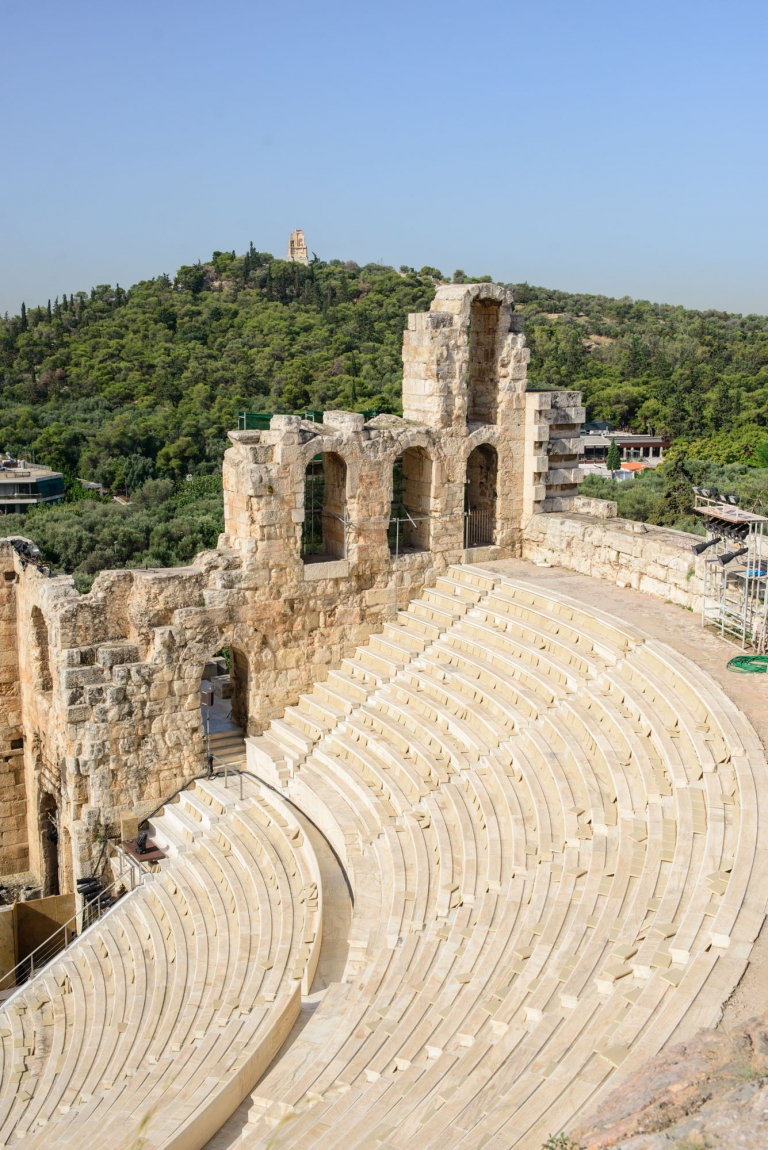 The kids and Emma started their South-East Asian adventure at the beginning of July, leaving Richard behind to work in England.

Vietnam, Malaysia and Indonesia featured on their five week trip before the family reunited with Rich in Queensland, Australia, their old home. 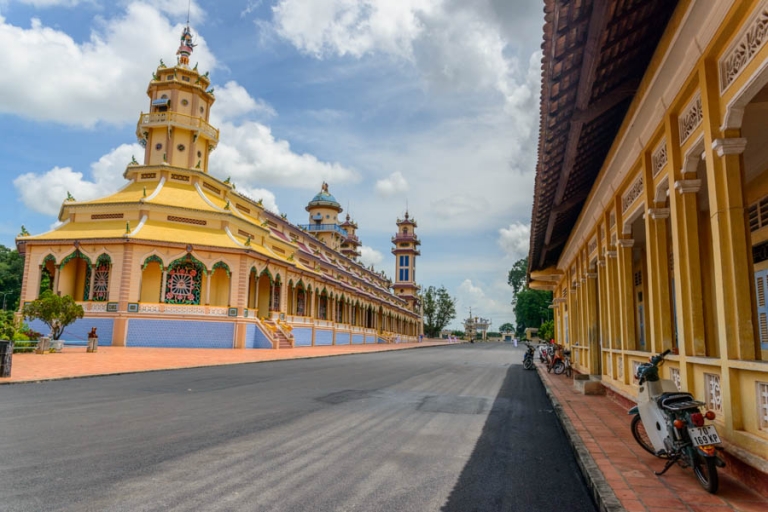 The largest temple of Cao Dai

After two weeks in the beautiful Queensland Tropics, almost bankrupt (we’d forgotten how expensive life was there, we headed over to The Philippines where we hoped breakfast out wasn’t going to cost us $70AUS/£35/$42US!

What better way to spend a holiday than visiting the idyllic island of Siargao. It was just what we needed after spending July apart but too soon it was over.

Richard had to return to work visiting Taiwan!! So Emma and the kids finished off their adventures in Cambodia and Thailand. 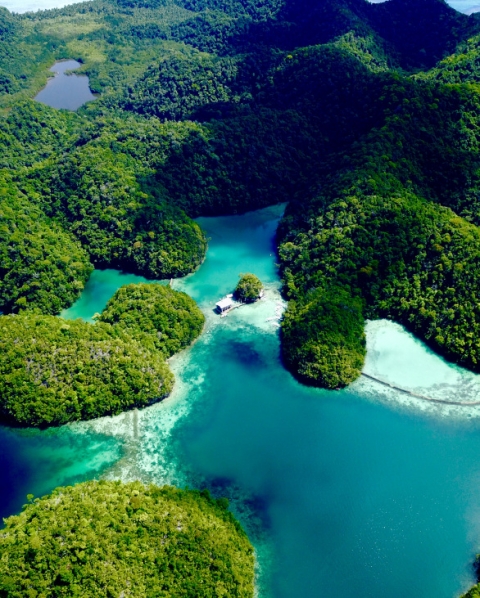 Sugba Lagoon from above

We landed in Romania and after a few weeks in Bucharest and snowy Brasov, we hop-footed it over to Bulgaria’s black coast to catch the last few rays of summer sunshine.

The sunshine may have been nice in the east but the moment we started travelling west towards Sofia it was bitterly cold. The first thing we did when he hit Sofia was buy four winter coats. BRrr!

A small hike up the Rila Mountains was enough to make us fly south in search of warmth and we landed in Spain. 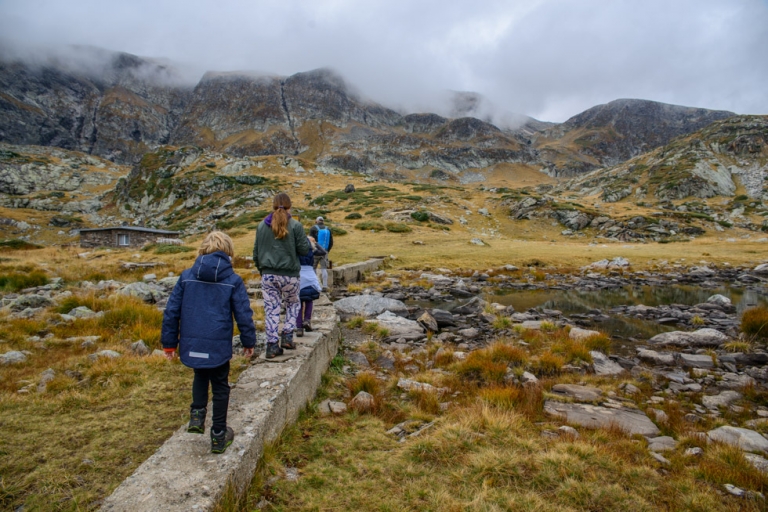 We flew into Spain and spent a month in La Herradura. A great deal on a house meant we saved a ton of money but an abscess on my tooth TWICE and a lot of dentistry work meant that three weeks were lost to pain and infection. Boo.

Still, it wasn’t all bad as we managed a weekend away in windy Tariffa. 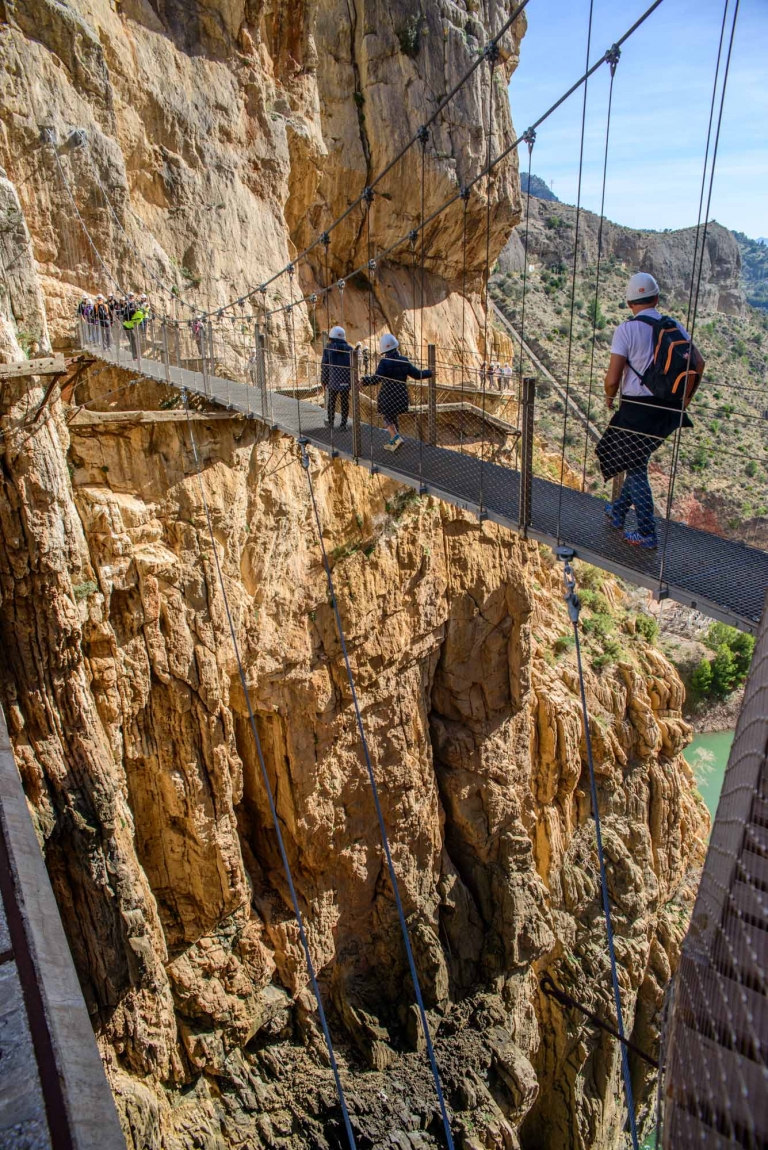 November saw us move further into south-west Spain, ever chasing those sun rays, and we spent a month in Estepona.

Tired and recovering from the abscess we really did very little and enjoyed some relaxed time in the sun. We grabbed a long weekend in Ronda exploring its old streets and clambering around the gorge before buttoning up our coats and flying into a cold and blustery Gatwick. But not for long! 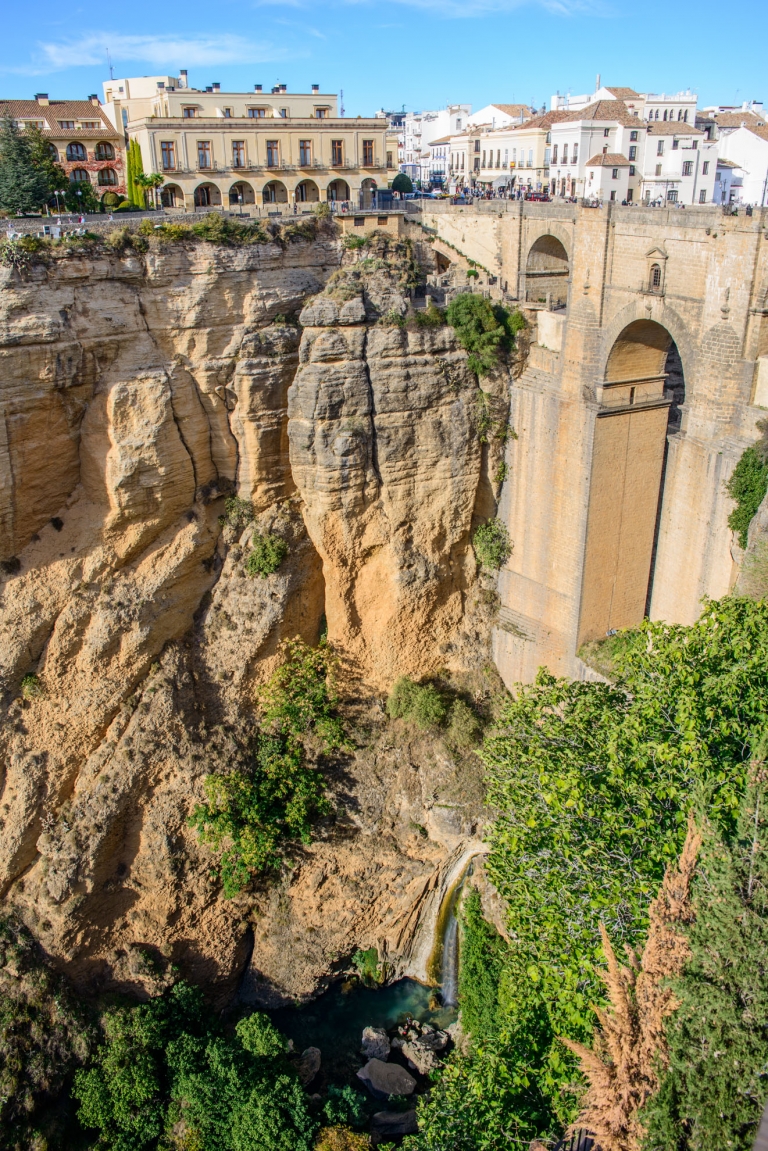 The view from the restaurant in Ronda

Because December saw us landing in LOS ANGELES … A rushed few days before we head further north to San Fran and then east to Las Vegas. Keep an eye out for all of those blog posts to come because we LOVED America and had a brilliant time. 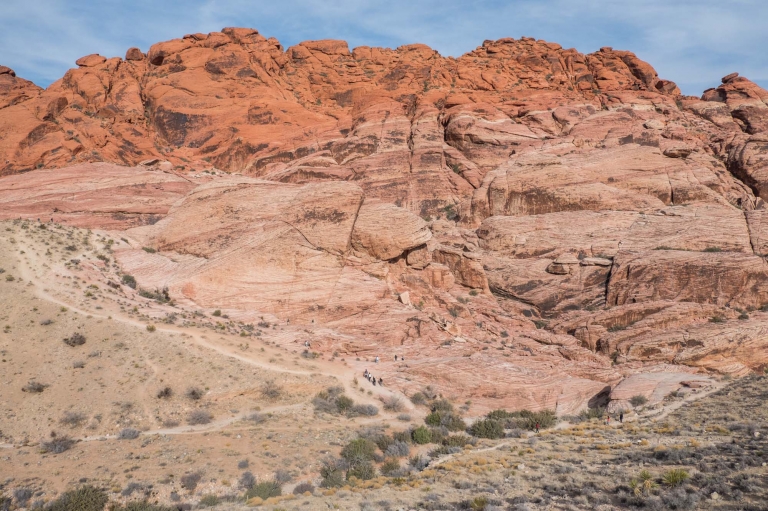 So that is it. Our very first Year on the Road. Thank you for being part of it 🙂

If you’ve enjoyed our journey so far, consider signing up for our newsletter because 2018 has already been a busy year with trips to Mexico, Belize, Guatemala and Costa Rica still to come!

Spread the love
10
Shares
10
Shares
Posted in Europe
« 10 things To Do From Flores With Kids, Guatemala
Spectacular Street Art & Where To Find It In Las Vegas »